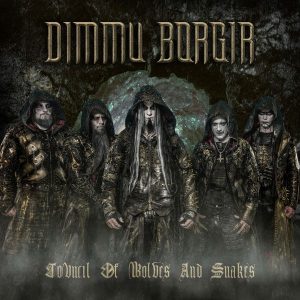 Let it be known that Norwegian symfo metallers Dimmu Borgir and their long-time contractor Nuclear Blast Records are, were, and never will be above completely and utterly milking their fanbase for every penny they’re worth. Thus we have the “Council Of Wolves and Snakes” EP, another prelude to the band’s much protracted “Eonian” epos, their first in eight years. From the looks of it it's an easy paycheck for everyone involved. They couldn’t even be bothered to allocate actual artwork for this soon-to-be redundant excuse of an extended play. If “Council Of Wolves and Snakes” is anything to go by, better prepare for the worst with “Eonian”.

There’s a grand total of exactly one new song here and the remaining five tracks, live and otherwise, have been culled from various EPs and region-exclusive album bonus tracks. In other words, band and label are charging fans for material already released and that some probably already own. Thus it offers no additional value to the single it appears on. The EP opens with a cover of ‘Nocturnal Fear’ from Swiss proto-metal combo Celtic Frost, a track that originally appeared on the 1996 “Devil’s Path” EP. It is followed by ‘Masses For the New Messiah’, an exclusive Japanese bonus track on 1999’s “Spiritual Black Dimensions”. ‘D.M.D.R. (Dead Men Don't Rape)’ is a G.G.F.H. cover that was a bonus track to Shagrath’s Mask version limited edition of 2010’s “Abrahadabra”. ‘Chaos Without Prophecy’ and the live rendition of “Enthrone Darkness Triumphant” staple ‘In Death’s Embrace' both originally appeared on the 1998 EP “Godless Savage Garden” which in itself functioned as a precursor to the earlier mentioned “Spiritual Black Dimensions”. Dimmu Borgir’s greed knows no bounds and once “Eonian” hits shelves this EP will be rendered null and void, but that won’t stop them from robbing fans blind.

Which brings up to the actual new content, a single track at that, of this EP. It seems Dimmu Borgir is genuinely trying to expand their sound here. Whether or not you come to Dimmu Borgir for what they’re attempting here is another thing entirely. ‘Council Of Wolves and Snakes’ is... something, although you’ll be hardpressed to gauge exactly what they were attempting here. ‘Council Of Wolves and Snakes’ starts with some winding psychedelic guitar noodling that wouldn’t feel out of place on one of those 70s occult rock revivalist records from Svart Records that came in response to Pentagram reforming in 2008. A vague Middle Eastern melody is introduced, but nothing is ever done with it. The prerequisite heavier section sets in and the pre-chorus comes replete with ethnic chants and tribal percussion straight out of “The Cross Of Changes” from German new age-world music project Enigma. The heavier riff is duly returned upon before giving way to an extended soft clean guitar part with string sections and choral backing during the choruses. Since this is supposed to be Dimmu Borgir Shagrath’s increasingly studio processed vocals include whispers and narration next to his exhausted croaks. For this band’s standards (lowly as they are) this borders on a trudging doom-like dirge, but everything stays safely in the pop-formatted power metal formula of Nightwish.

The question, of course, is: is this what people come to Dimmu Borgir for? The earlier “Interdimensional Summit” EP was a lot of things, but it wasn’t good. To their credit, this song as well as the earlier released one do sound very different from anything and everything the band has done prior to “Abrahadabra”. Dimmu Borgir these days sounds strangely life-affirming, uplifting, and triumphant in ways usually reserved for Scandinavian and Japanese power – and neoclassical metal. There isn’t enough material present to justify the +5 minute lenght (there’s barely enough content for the standard 3 minutes) and, as per tradition with this band, they artificially draw out what little there is of the actual song. Apparently this song was important enough to warrant a music video. Make of that what you will...

Granted everything is pristinely produced, a bit too clean altogether perhaps. Gone are the days when this band played atmospheric folk metal, romantic dark metal, keyboard-oriented groove and industrial metal. These days Dimmu Borgir is a thinly-veiled power metal act with only a veneer of what they once were. Perhaps Shagrath, Silly-Nose and Galder are growing mellow and soft in their old age? Who knows... or cares at this point? “Council Of Wolves and Snakes” is very much a continuation of the path the band embarked on with “Abrahadabra”. It remains to be seen whether or not the fans will follow them along this path. Time will tell whether “Eonian” was worth the near-decade long hiatus from the studio.