After the stillbirth that was “Death Cult Armageddon” there was no way to go but up for Norwegian symfo metal outfit Dimmu Borgir. Having “removed” Nick Barker from the line-up sometime prior to the recording the band took to it not enrolling anybody within the foreseeable future. “In Sorte Diaboli” is the fifth of a five-album cycle wherein the band employed a three-word album title as an easily recognizable gimmick. Written entirely by Silly-Nose (erm, Silenoz) it is another loosely conceptual album with a narrative not worth summarizing. As expected notorious drum whore Jan-Axel Blomberg (Mayhem) sat in with the band for this session, as he had done for the dreadful predecessor to this record, the entirely unnecessarily re-recording of the band’s atmospheric and tolerable but underwhelming 1996 platter “Stormblåst”. 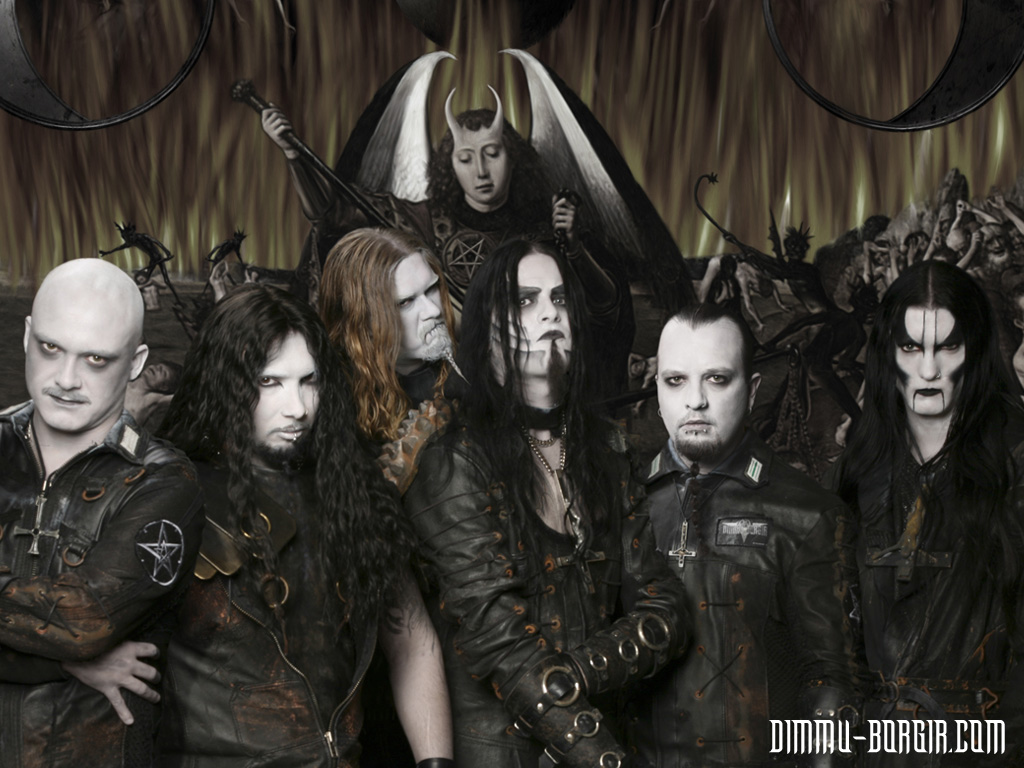 Supposedly, this was the first of a three-part concept cycle of which, thankfully, the proposed latter two chapters haven’t materialized (as of this writing). The gimmick, Demon Burger always needs a gimmick, this time around being that all tracks start with the article “the”. Always late to a trend, Dimmu Borgir capitalized on doing something the equally wretched The Haunted did the year before with its 2006 album “The Dead Eye”. There are 9 (or 10, depending on which version you own) songs on this album. The lyrics are so non-committal and general that, without the band’s persistent insistence that is supposed to be a narrative-driven album, you’d be hardpressed to actually notice such a thing. Content not only to capitalize on one trend Demon Burger also apply a Latin album title here, which is something every black metal band has been doing since…. 1994 when Mayhem did it with “De Mysteriis Dom Sathanas”? This might be just me, but is Demon Burger trying desperately to reclaim whatever miniscule underground credibility it had years ago by vainly attempting to appeal to genre purists? It looks like it by the sight of things. Granted, it is the first decent artwork they had in many years.

Are there any differences with “Death Cult Armageddon”? Sure, a few minor ones. This batch of songs is a bit faster and more technical compared to the previous session. But this is Demon Burger we’re talking about. The band hasn’t suddenly leaped forward in terms of songwriting or arrangements. Far from it. The orchestra has been toned down somewhat, and the metal aspect once again leads the songs – but we are a long way from “Spiritual Black Dimensions” or even “Enthrone Darkness Triumphant”. The band’s biggest faltering is still its reliance on chug riffs and power-chords to carry the bulk of the songs present. Even the presence of Blomberg, who usually brings a certain amount of technicality and undeniable flair to his work, is mundane and trite sounding. A record like this makes you wonder why this band needs two guitarists if all they do is chug. The guitar work was the most interesting when Jamie Stinson was in the line-up, as it was varied, technical and contained plenty of sparkling leads/solos. None of that is to be found here, which begs the question what Galder exactly brings to this band, musically. Does he just imitate Silenoz’s style, and that’s the end of it? If so, what is gained? His presence hasn’t resulted in better, or more involving songs, far from it actually.

With the kind of artwork that graces this record, one would assume that Dimmu Borgir would finally take the chance, and actually prove they can write very dark, or abstractly theological lyrics about the Satanic philosophy. No such luck here, as the lyrics tiptoe around the darker themes – and much of it is the typical banter that plastered the preceding albums. It all sounds really profound in the moment, and the band hasn’t yet cast aside its thesaurus – yet when you stop to actually think about what they have written, you realize just how pointless and futile the whole endeavour really is. They finally capitalize on black metal’s fixation with Latin too, never mind that Mayhem did it as early as 1994, one year after this sorry chameleon formed. Even Dark Funeral and Gorgoroth capitalized on this trend much earlier, but that doesn’t stop Demon Burger from trying its hand at it.

“In Sorte Diaboli” sounds as vacuous and trite as it title suggests. High production values, big-budget promotional clips and the strong promotional push from the label can’t hide how redundant, futile and pointless of an exercise in banality this truly is. For a band that had been active for nigh on 15 years the accumulated experience and expertise isn’t reflected in the finished product. Is “In Sorte Diaboli” better than the two records preceding it? Yes, it is – but that isn’t saying much of anything. Especially when you consider that many bands in the underground were truly pushing the boundaries of the genre, with involving songwriting and increased levels of proficiency in regards to instrumentation. This record sees Dimmu Borgir returning to a semblance of coherency after two highly inconsistent albums.

That merely makes this record competent, even if it for most of its running time sounds like soundtrack to an early Tim Burton movie with chugging guitars and vocoder vocals. Even Jan-Axel Blomberg plays far below his skill level with the insipid, midtempo, lowest common denominator death/thrash he is given to work with with this batch of songs. Simen Hestnaes graces only a few of the songs with his golden pipes, but he is merely cashing a cheque as far as his bass playing is concerned. No interesting patterns are to be noted. The riffing of Silenoz and Galder is more involved and demanding than the repetitious chugging that adorned the atrociously awful “Death Cult Armageddon”. The record is more guitar-centric, but even then it is a forgettable, mediocre and bland offering that relies far more on sheen and perception than actual songwriting skill. Even if the guitar work is leagues better than the preceding record, it still doesn’t excuse the absence of leads/solos. The band’s old habit of blaring the keyboards louder when they don’t know where a song should go is (sadly) continued.

Shagrath’s voice has further deteriorated; this becomes especially clear during the spoken and vocoder parts. His screech was never particularly impressive, or good, and it doesn’t sound any better here. As always his voice is bathed in numerous studio effects and filters. That the band never exploited Hestnaes more vocally remains puzzling to this day. His extended vocal parts in ‘The Sacrilegious Scorn’ and ‘The Invaluable Darkness’ are the only worthwhile moments in those pitiful tracks. Despite appearances the record still has nothing to do with black metal in the slightest, and even the presence of notorious drum mercenary and Mayhem figurehead Jan-Axel Blomberg doesn’t change that. This is competent orchestral death/thrash metal with rasped vocals about spooky antireligious subjects, but that’s the extent of it. No matter how hard the band pushes its black metal imagery, they never were or ever will be associated with it.

As expected Dimmu Borgir was able to work with the best in the business. “In Sorte Diaboli” was recorded at Studio Fredman with Fredrik Nordström, Patrik Jerksten and the band producing. The album was mastered by the much in-demand Russ Russell at his Loud As Fek facility in Kettering, England. Additionally, three big-budget promotional videos were shot (for the tracks ‘The Serpentine Offering’, ‘The Sacrilegious Scorn’, and ‘The Chosen Legacy’) by famed Swedish music video director Patric Ullaeus for Revolver Films but they can’t hide how utterly vacant this record is. The artwork is supposedly based on paintings by Hans Memling, whose ‘The Last Judgment’ triptych already was used whole, or in part by God Dethroned and Hate Eternal – but it is too little too late as Dimmu Borgir had been awful ever since the early 2000s. For some reason this band remains ever popular within the more populist demographics, and the corporate metal press for that reason. Anybody with some standards for his/her metal has written off this joke of a band many, many years ago. “In Sorte Diaboli” is a terrible, terrible record - even for the lowly standards of Dimmu Borgir - and you know it.