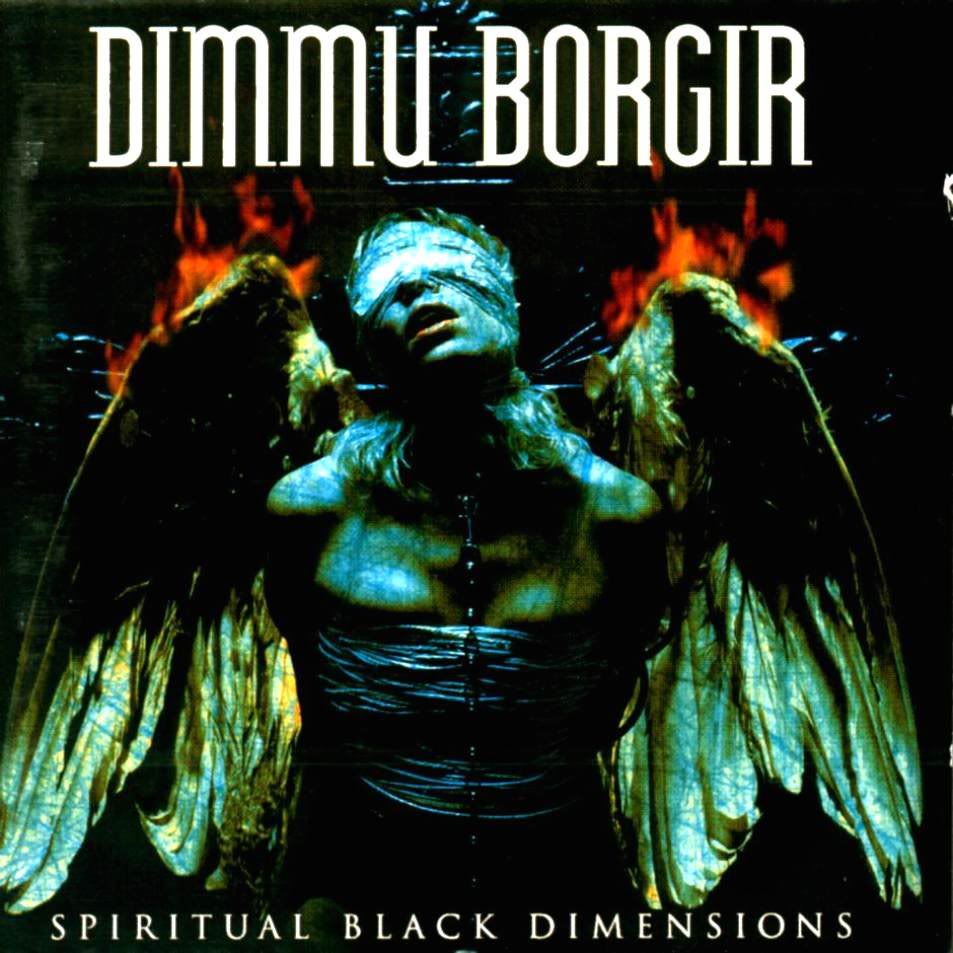 One of the few good things that could be said about “Enthrone Darkness Triumphant”, outside of how catchy it was, is that it had a modicum of restraint and the good taste to rein in the band’s pompousness. The follow-up to that ill-fated record fares less well, as what little restraint the band had is thrown out along with their eternally top-hatted keyboardist Stian Aarstad. In his stead the band enlisted one Øyvind Sven Mustaparta (Mustis), Borknagar’s Simen Hestnaes was asked to provide clean vocals for the recordings, taking over on bass guitar once Nagash was cut loose. Dimmu Borgir also officially enrolled Australian expat Jamie Stinson (Astennu) on lead guitar to relieve Shagrath of said duties. The band returned to the prestigious Abyss Studio in Sweden once again and Per Gron was tasked with creating the artwork for the album. It is the second of a five-album cycle in which the band employed three-word album titles. So with two new members, one esteemed studio guest and the continued support of Nuclear Blast did this record end up being better than its forbear? Well, no. Not really.

What a difference one member makes. On the last album the synthesizers were already pushed up and front far enough to be irritating, but on here they overpower everything outside of the drums. One of the greatest jokes on Dimmu Borgir’s part is the fact that they boast two guitarists, yet all the guitars do is follow and double the synthesizer parts. The guitars never lead, and for the most part they just chug along with whatever the keyboardist throws at them. At this point the synthesizers dictate the songwriting. This was already apparent on the preceding album, but it is taken to its logical conclusion here. This is where Dimmu Borgir (Demon Burger, truthfully) became a symphonic band first, a metal band second, and a black metal band distant third or fourth – if they ever were one, to begin with – but that’s a discussion for another day. Every possible synthetic element of Dimmu Borgir is magnified tenfold with this album. 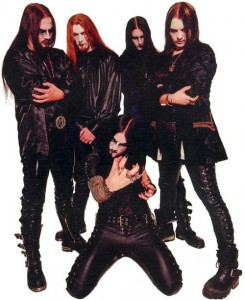 However, the guitars do have their moments. There are a couple of leads/solos on this album, and whenever they appear some care was put into their crafting. The solo’ing in ‘Behind the Curtains Of Night – Phantasmagoria’ is worthwhile, but it's surrounded by the most gimmicky, goofy sounding synthesizers imagineable. Granted the guitar work is at its most technical here thanks to the presence of Stinson, who pushed the band into this territory and was later re-thanked in kind by being thrown out in the streets and off the payroll. The drumming is also more varied than on the last album, Ian Kenneth Åkesson (Tjodalv) delivers his defining performance in what was to be his last recording session with this unit. Alternating between standard rock drumming, powerful fills and blastbeats, his progress behind the kit is one of the great things about the record. Nagash, still on the bass guitar, is mixed so deep under the guitars, multi-layered vocals and overbearing keyboards that you have to strain your hearing to catch a glimpse of his playing. Why was this mixed the way it was? I have no idea. This was the last album to feature Nagash, so Dimmu Borgir thanked him by mixing him out entirely? What’s this? An “…And Justice For All”-type band-related prank for the world to see?

The biggest offender, outside of the ridiculous synthesizers, is frontman Shagrath. While he never was the greatest or most versatile of singers on the preceding album there was diversity thanks to the presence of Silly-Nose (erm, Silenoz) and Nagash on backing vocals. With both men now being restricted to their individual instruments, Shagrath’s vocals now become a fixation for the production and songwriting. These songs aren’t written with guitars in mind, they aren’t written from the drum perspective. No. These songs are vocal-oriented and keyboard-driven exercises first, and the remaining instruments merely serve as windowdressing and give everybody an excuse to stand on stage on tour. It is here that Shagrath starts using processors and digital enhancements that only expose his limitations more than anything. Screeches, whisphers, supposedly spooky narrative bits – there isn’t any studio technique left unused to prove just how evil and profound this sorry band of musical chameleons think themselves to be.

There are good parts, however few. ‘Dreamside Dominions’ is an early highlight, ‘The Promised Future Aeons’ is a good song once you get past the corny synth opening and the plinking piano parts that usually annoy more than they help. Album high mark is ‘The Insight and the Catharsis’ which is the most ambitious song the band has ever written, before or since. The single ‘Arcane Lifeforce Mysteria’ is a nice change of pace, and its excellent use of dynamics proves that Demon Burger can write a decent song if they set their mind to it. So, 4 songs out of 9 are worthwhile – that still means more than 50% of this album is generic filler that only impresses the most easily impressionable, which usually are pre-teen boys and girls that shop at Hot Topic. This is means you are shit out of luck if you want good music, but I suppose since the average Dimmu Borgir fan is 14 years old and unexposed to the better bands in extreme metal, it is a start.

So, this leaves us with the giant elephant in the room, and that is the obvious fact whether or not a person should classify this act as black metal. No, Dimmu Borgir is not, by any stretch of the imagination, black metal. They are some vague form of metal, sure – but only the most unassuming, unambitious and pestilential strain of metal. This is a band unafraid to use death - , thrash – and traditional heavy metal riffs as their main ingredient. Couple that with the most unadventurous, standard verse-chorus song structures and what you have left is another useless, inoffensive extreme metal band whose biggest ambition is to be accessible to the masses. Every single thing that could put segments of their intended audience off is cut out and replaced by something safe and preferably generic. Yes, they all wear corpse paint, there are several uses of occult imagery and the lyrics are the sort of pseudo-intellectual (and incoherent) talk about infernal imagery, loose women and dark overlords – but to what end? Simen Hestnaes is relegated to a few verses on two or three songs, and his clean vocals are wasted on material this mediocre and a band this generic. This band wouldn’t recognize a good riff if it hit them in the corpse painted head. They write songs, but seldomly do they lead anywhere, and in the absence of song climaxes, they just blare the synths louder. 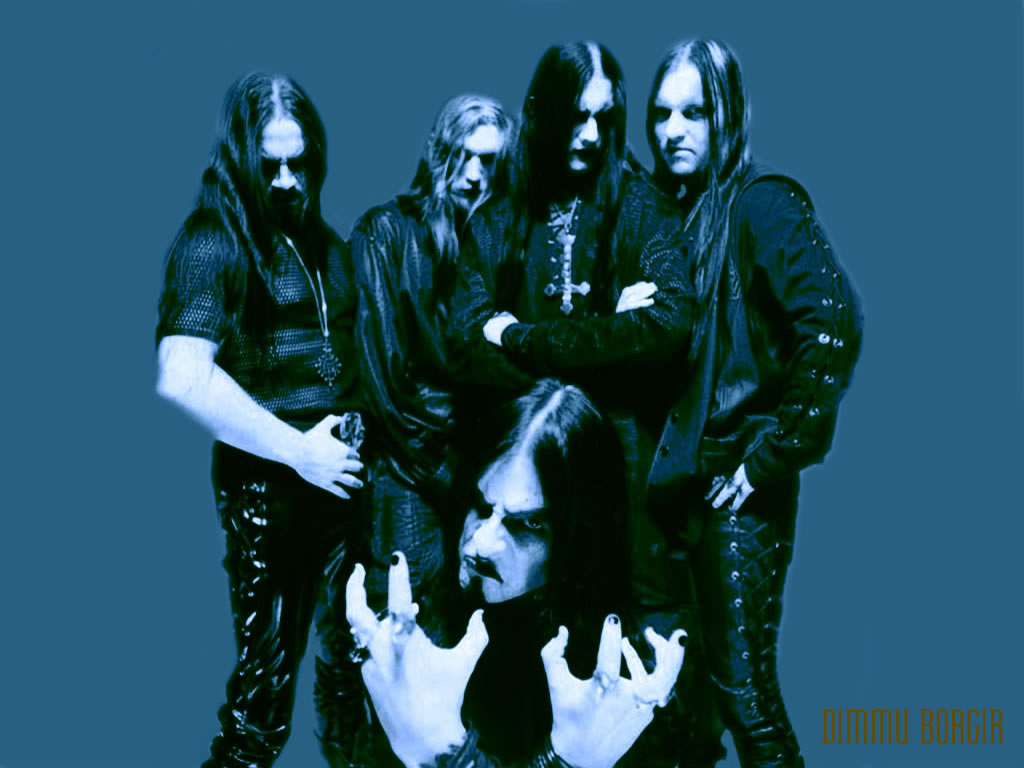 That is not to say that this record isn’t enjoyable. It is. Just like “Enthrone Darkness Triumphant” this is a record best taken on face value, and not as a black metal record. From that viewpoint is a moderately satisfying exploration of extreme metal’s more symphonic avenues, and outside of the fact that the guitars are subject to the domination of the keyboards, this is a fun record that doesn’t demand too much from the listener’s attention. As far as melodic, keyboard-driven death/thrash metal goes it is tolerable, and even good in parts. The vocals are acquired taste and overdone for the most part. Most of the guitar playing, whenever it’s allowed to flourish and solo, is far better than on the preceding album, and the drumming is tasteful and fitting to the material. For good or ill, this is the last tolerable Dimmu Borgir album – because after this Demon Burger would descent into industrial banality and from there veer into orchestra-laden portentousness ever farther. “Spiritual Black Dimensions” is the last album where Demon Burger wrote songs, however lacking and thin as they were. There were songs. It’s all downhill from here, folks…