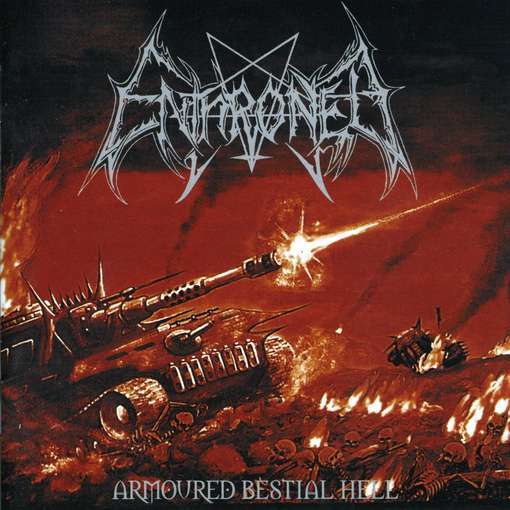 The fourth album for Belgian black metal horde Enthroned is one marked by internal instability, and external problems that keep it from reaching its intended goal. Beset by problems from every side “Armoured Bestial Hell” is what should have been a glorious continuation of the band’s generic but efficient sound, but only partly succeeds due to a number of critical errors on part of the band, and their label Blackend Records. These setbacks make “Armoured Bestial Hell” only a fraction of what it should have been, and appears to be a black page in the history of the band. They would rebound from this setback far more hungry and more focused than ever. Our current subject is anything but focused. The record is a string of bad decisions magnified by a shoddy production and interpersonal problems that results in the most amateur drum job by what was, on all accounts, a decent second-tier band with an image and audience deserving better.

“Armoured Bestial Hell” is the recording debut for new guitarist Olivier Lomer (Nerath Daemon) who replaced long-serving axe man Dimitri Gillard (Nebiros). It is the last album for drummer Fabrice Depireux (Namroth Blackthorn), whose sloppy and outright terrible playing and conflicts with core duo Franck Lorent (vocals, bass guitar) and Régis Lant (guitars) would eventually result in his firing.  It is then not surprising that this album was a hack job on part of both the band, and their label. Additionally there’s around 12 minutes of padding through instrumental tracks. These only serve to mask the fact that everybody was giving minimal effort. Where the previous album was a blistering exercise in speed and overall extremity, this fourth album is more deliberately paced, almost groovy exercise that, in the absence of strong material, falls back on the band’s death – and thrash metal past to salvage what remains of a promising concept. 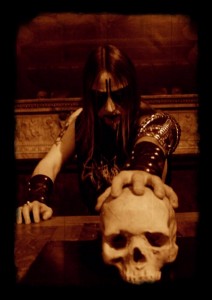 One of the things that instantly stand out about this album, and not in a good way, is how amateurish and ugly the overall presentation is. Where the band’s previous outing had all fronts covered in terms of cover artwork, typesetting, photography and overall design. This new album is several steps back on all fronts. The photography is grainy and of low quality. Enthroned uses their usual font, but this hampered by the horrible contrast when combined with the, admittedly glorious, cover artwork they are imposed over. The typesetting would have benefitted from a darkened version of the background. That way the white lettering stands out more, and is generally easier to read. The pictures of each member appear to be taken by fans, and not a professional photographer. To add insult to injury, the band (or their label) couldn’t even be bothered enough to take a good-looking band picture for the booklet, or general promotional purposes. If this band was important to Blackend (which I doubt), then why sabotage them at every possible step? Even if the label didn’t care for anything other than the bottom line and the profit, would it have hurt to have a higher standard for its own product? No, exactly. This was released in 2001, independent bands were releasing better looking and better sounding promos/demos by now. There is simply no excuse!

After the pointless ‘Humanicide 666’ intro the record starts off with ‘Wrapped In Fire’, a song about throwing an infant into a furnace, that not only contains hilariously awful and generally incoherent lyrics, but also a chorus that is nothing else, but “burn, baby, burn!”. Even if it was a re-working of a song appearing on the band’s 2000 promo (where it was called simply ‘Burn!’) doesn’t excuse such laziness on the lyrical front. Other than that it would be hard to believe that the men in Enthroned were closeted The Trampps fanatics, these lyrics add zero to the black metal pantheon in terms of subjects. Granted, this band was never known for its good lyrics, and is ridiculed for it a good deal of the time – but even taking all that into account, the lyrics are piss poor… even for the lowly standards of Enthroned. Spelling and grammatical errors are still abound, and continue to litter this band’s latest album, in what now can be rightly called a long-standing and sad tradition. ‘Enslavement Revealed’ is the first good song outside of ‘Wrapped In Fire’, but it is nothing more than a thinly veiled thrash metal song written from a black metal perspective.  ‘Spells From the Underworld’ opens on a doomy note, but is among the very few worthy tracks on this otherwise underachieving record.

The drumming is sloppy as mentioned earlier, and the songs are mere shadows of what was on display on the preceding better album. There are even long stretches in songs where there’s no snare activity at all, just listen to ‘Wrapped In Fire’. There’s a thrash structure that dominates the playing – this is in many ways a return to the old drumming style last heard on the band’s debut “Prophecies Of Pagan Fire”. The pace is notably lower, and while the band still plays hellishly fast these songs appear to be underwritten and not nearly as dynamic and creative as on their previous releases. The bass solo towards the concluding part of ‘The Face Of Death’ was interesting but ultimately underused. The narrative opening to ‘When Hell Freezes Over’ is very atmospheric and not something the band had done before to that extent. Then there’s the fact that the album ends in the kind of stunt that only Morbid Angel would dare pull on their fanbase. After two instrumental closers (‘Premature Satanicremation’, ‘Terminate Annihilation’) to an already shoddy album Enthroned has the gall to include an uncredited outro which runs over four minutes in length. Not only does this artificial padding add absolutely nothing of value to the record, the record itself isn’t the band’s finest hour. Why was this allowed to happen? Didn’t anybody have any standards?

“Armoured Bestial Hell” is the second part of Enthroned’s post-apocalypse trilogy of records, of which “The Apocalypse Manifesto” was the first chapter. This second album deals with the apparent “apocalyptic revelations” after the events of “The Manifesto”. The album details what happens after the religious flock have been exterminated and consumed by the hellish fire of the Apocalypse. A recurring theme is that of the thinning of their own herd, by killing all betrayers within the ranks. Other than that these lyrics still deal with the typical subjects of perversion, violence, mutilation, Satan (in a literal sense) and the band’s allegiance to occult subjects inter-related to all of these things. Why the band even bothered with tying these records together is something we’ll never know. That doesn’t change the fact that the links are superficial at best and tangential at worst. I love concept albums, but at least raise an effort to tie these things together.

After recording two albums in their native Belgium and the previous one at the prestigious Abyss Studio in Sweden, the band (or its label, who knows?) opted to record at Real Sound Studio in Gelsenkirchen, Germany with producer duo Oliver Grosse-Pawig and Regan Keirns. Grosse-Pawig’s has numerous production credits to his name, but those of note seem to be Sodom’s 1994 album “Get What You Deserve”, which wasn’t their high mark and Sinister’s universally lauded third record “Hate”. To date this is the only production credit for Keirns, which isn’t surprising. The drum sound is awful with overpowering kickdrums, while the snares and toms sound almost like a glorified demo recording. The guitars fare little better with a sound similar to the one last heard on “Prophecies Of Pagan Fire”. Lorent’s vocals are comical as ever, and they sit higher in the mix than ever before. This isn’t strange in itself, but for a guitar – and drum-oriented genre as black metal, it is a rather puzzling production choice. Another thing is that the vocals tend to sound rushed more than anything, and half-hearted at that. What does return is Lorent’s prominent popping and plucking bass guitar that was suspiciously absent on the otherwise smoothly produced “The Apocalypse Manifesto”. The shredding leads/solos remain, but they are mostly muffled underneath the guitars, and why they feature not more prominently when they appear is a question for the ages. It probably also explains why Enthroned worked only once with this producer and studio – the whole is botched in the most spectacular way possible. Not since Suffocation’s “Breeding the Spawn” has a band been this crippled by an incompetent production job.

Overall is “Armoured Bestial Hell” the kind of album you wish upon no band. Next to being the most amateurish in design and presentation, this album is also cursed by the most unflattering of productions. Not only was Enthroned having problems within its own ranks, but they also appeared to be on terms of war with their contractor, Blackend Records. In their swansong for the label, Enthroned do not only sell short themselves, but also their loyal audience who stood by them in the many years prior. Many songs feel unfinished and underdeveloped, the performances of all involved are tolerable, but nobody is adhering to previous standards. The cover artwork by Jamie “Rok” Robley (Sadistik Exekution) can do little to redeem this inconsequential and ultimately pointless exercise in banality. As the second part of a three-album concept this one is underwhelming, rehashed and painfully mediocre. Coming from a band whose entire existence can be defined as generic and second-tier when feeling charitable makes it even more damning. Yet this album released, and it is here. There’s no way back now.