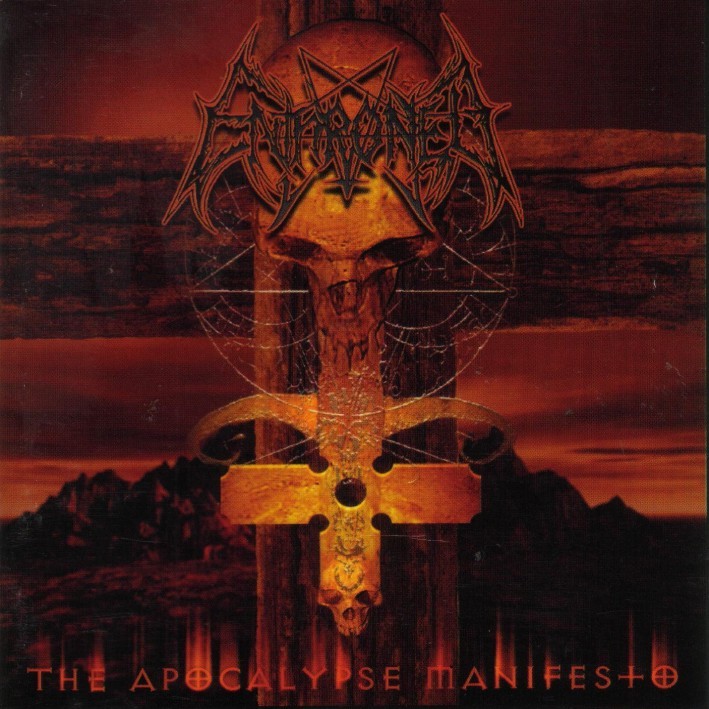 “The Apocalypse Manifesto”, the third Enthroned album and their one but last for British label imprint Blackend Records, who were more famous for their compilations than for the artists they contracted. It is the long anticipated recording where the band finally comes into its own, and at long last mastered the Northern sound they had been hinting at for the past two albums and that little stopgap EP. The line-up from “Towards the Skullthrone Of Satan” returns, along with new drummer Fabrice Depireux (Namroth Blackthorn), in what would be the best most stable and long lasting constellation to date. Blessed by both much stronger and better written material plus a glossy production that is able to harness their power and nuance, Enthroned was finally ready to prove their true worth. So how does this album stack up to their earlier releases? Let’s find out!

In structure the album follow the pattern laid out with Marduk’s “Heaven Shall Burn…” that was released three years before, while the overall construction of the songs recall “Panzerdivision Marduk” more than anything. This isn’t all that surprising since the latter Marduk album was released in the beginning of 1999, and Enthroned’s own new album would only arrive in December of that same year. On all fronts this third album is about extremity: extreme speed, extreme tightness and extreme subject matter. This is the album where Enthroned spread its wings a bit, and wasn’t afraid to venture into more technical territory with some of its song structures. Notable is that Enthroned now are finally fully black metal in all of its corpse painted, leatherbound and spiked glory. Traces of death – and thrash metal are so minimal that they can easily be missed when not paying close attention to what is happening or how things are written. 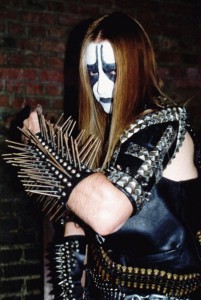 Supposedly an album about “the Apocalypse from a strict Satanic perspective”, which is hard to tell from the actual lyrics because they mostly seem to deal with genocide, warfare and various forms of extermination. They are ever so slightly better than the hilarious pieces written for the preceding two albums. This can probably be attributed to the fact that most lyrics were written by other members than Franck Lorent. There are still grammatical – and spelling errors all over the place, but the whole thing at least appears to have some thought put into it, something that couldn’t be said previously. What radically different light or angle the “strict Satanic perspective” is supposed to shed on the topical Apocalypse is anybody’s guess. The lyrics certainly don’t help matters because nothing new is to be gleaned off them. Unless I’m missing something.

For the first and only time Enthroned was able to record in Abyss Studio in Sweden, and Tommy Tägtgren does a commendable job of capturing Enthroned’s barbaric offerings in a smooth and glossy digital environment that, for the first time, allows the many nuances in the band’s riffing to come to the surface. The drums are far less loud and crushing, but the crisp digital sound of the drum kit allows more space for the lead – and rhythm guitars to break through, while Franck Lorent’s vocals are still up, front and center. Curiously, the presence of Lorent’s usually thundering bass guitar is notably toned down compared to past records but it is still vaguely audible, but its presence is more supressed. It wouldn’t be heard again until the next album that was recorded elsewhere. The cover artwork by Adrian Wear is the band’s most sophisticated piece to date, and the whole presentation of this album exudes professionalism to nth degree.

Various problems arose with the production of this album. Track 5 ‘Post Mortem Penetrations (Messe des Saintes Mortes)’ is omitted on the first 2000 copies despite being mentioned on the tracklisting, and having its lyrics printed in the booklet. Track 4 is called ‘Retribution of the Holy’ on the back cover and on the last page of the booklet, and ‘Retribution of Holy Trinity’ inside the booklet (but the lyrics contain the phrase "...retribution of the holy trinity."). The hidden track after the last song, a fiery cover rendition of Exhorder track ‘Anal Lust’ was a nice surprise. Its inclusion here would only be explained by the direction the band would embark on after two more albums in the style perfected here. On the whole these production problems aren’t that much of a hassle – and they don’t take anything away from what this album intends to do. It wouldn’t be until the next album that Murphy’s Law would come into play, and botched what should have been a suitably punishing follow-up to this loosely conceptual battering about the Christian interpretation of the End of Days, the Apocalypse.

The booklet also contains an almost page-long rant by frontman Franck Lorent about the then-current state of the black metal scene, and who the band considers to be posers. This becomes especially funny in hindsight as Enthroned itself is firmly a second wave act. Much of its sound is derived from 90s Scandinavian (mostly Norwegian and Swedish) bands, and its key members had a background in death - , thrash – and doom metal prior to forming the band, and joining the burdgeoning black metal scene. In fact, rumors persist that Enthroned was targeted by French black metal scene purists Les Légions Noires for not being “necro” enough, and allowing outside influences to taint its sound. Discussions about the band’s purity of sound aside, “The Apocalypse Manifesto” doesn’t make any illusions about what it is: a solid second-tier effort from a band that had faced its fair share of bad luck, and finally regained some much needed stability. Even though the concept is fairly ridiculous, the band manage to pull it off in a fairly respectable manner, and their conviction about the subject is endearing, to say the least.

All these superficial and production problems aside “The Apocalypse Manifesto” is probably Enthroned’s most potent and strongest offering up to that point. Yet despite their progression, this is still deeply generic, incredibly mundane and well, inoffensive non-Scandinavian Norsecore. All the proper tools are in place and accounted for, yet the band isn’t able to write something to truly remarkable. Nothing on this album serves to set them apart from the other faceless competitors (and imitators) that had sprung up as a reaction to their first two albums. As blistering and unrelenting as this album is, it’s just that: unrelenting, and little more. This would continue to characterize Enthroned, who appear to be forever relegated to the role of bridesmaid while some of their peers would be able to move to greener pastures, supposedly those made of money. A sufficient and reliable second-tier act at best, Enthroned was able to build up a solid fanbase and niche within the underground, but that’s about it – and that’s okay.