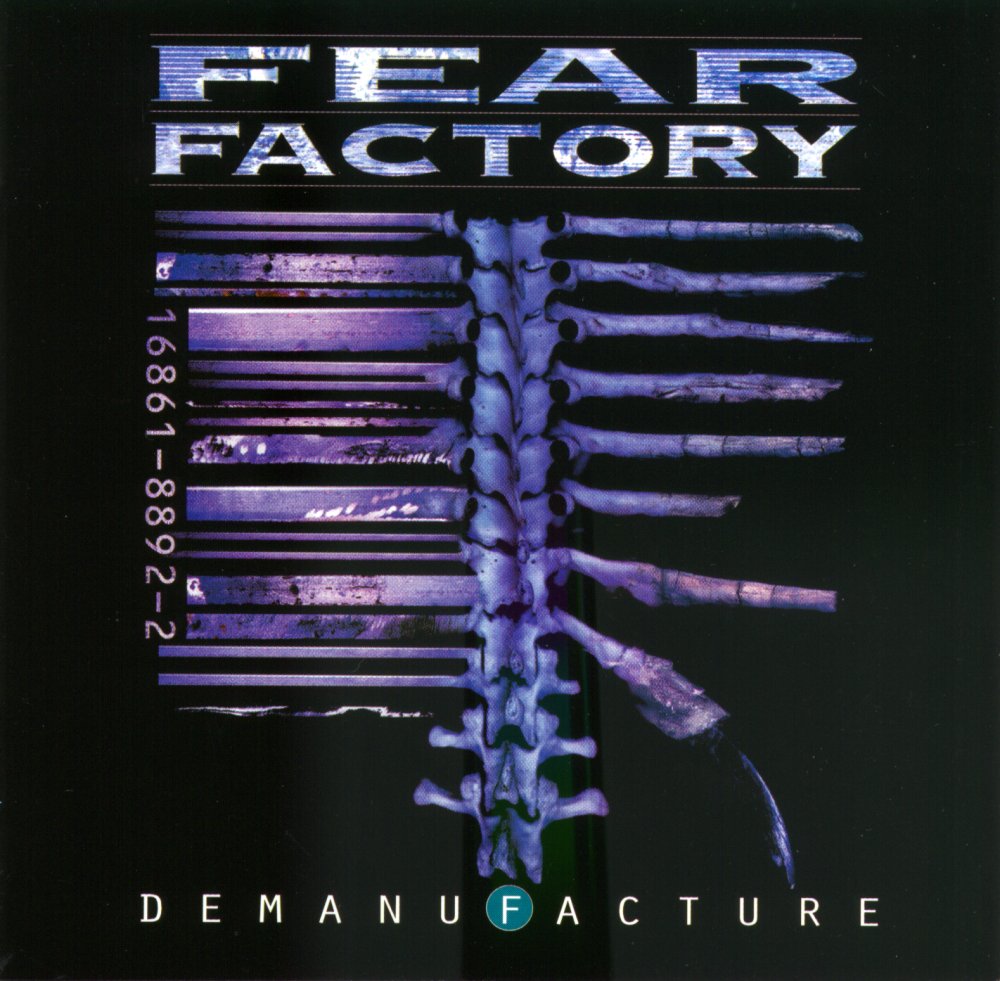 “Demanufacture”, the second Fear Factory album, is one that introduced a number of significant changes to the band’s formula. The rough edges that defined “Soul Of A New Machine” have been traded in for a pristine sound in both writing and production. Along with a new vocal style also comes a greater sense of accessibility and more reliance on groove. It was the debut for Belgian bass guitarist Christian Olde Wolbers, although he joined towards the completion of the recording sessions. His influence wouldn’t be truly felt until the successor to this album. “Demanufacture” was the album to introduce Fear Factory to a wider audience. It remains the band’s most widely publicized and its most enduring release. To this day it is the standard to which all things Fear Factory tend to be measured. Its legacy is one that even the band that wrote it wasn’t able to live up to. 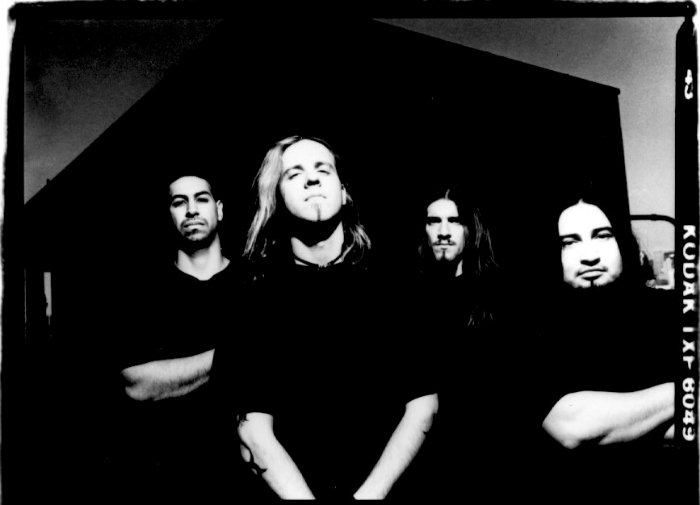 Burton C. Bell abandons his perfunctory growls in favor of a harsh shout similar to Max Cavalera’s on the divisive “Chaos AD”. In 1993 the band parted ways with early bass guitarist Andrew Shives. Belgian lead guitarist Christian Olde Wolbers, who cut his teeth in local thrash metal mavens Cyclone and some years down the line with Liège-based outfit Asphyxia, would at a later stage supersede him. The latter outfit would later briefly become famous for lending out its drummer Da Cardoen temporarily to Belgian black metal unit Enthroned for the studio sessions of its second record. Olde Wolbers arrived at the tall end of the studio sessions, only having some minor input on the title track and ‘Pisschrist’, which has nothing to do with the famed 1987 Andres Serrano photograph, but instead is a spiritual reworking to the track of the same name from the then-unreleased “Concrete”/pre-“Soul Of A New Machine” sessions. The same rings true for ‘A Therapy For Pain’, which was a reworking of a song called ‘Echoes Of Innocence’. The opening riff of the original song was used as a synthesized motif in its new form. Dino Cazares played bass guitar during the “Demanufacture” recording, despite Christian Olde Wolbers being credited as bass guitarist in the production notes.

There’s a notable evolution in terms of composition and performance when compared and contrasted with “Soul Of A New Machine”. Each of the songs is written with a specific objective in mind, and the flow of the record is far better paced. Dino Cazares has found his definitive tone, and his rhythm-only staccato riffs form the backbone of each track. The mechanical riffs play in syncopation with the high-precision drumming, which occasionally almost sounds programmed due to the triggering. Where a good deal of the “Soul Of A New Machine” songs tended to meander aimlessly, each of these cuts don’t waste time in getting their intended point across. All the songs have been trimmed and honed into perfection making “Demanufacture” not only better paced but also more compact on the whole. What it lacks in grittiness it makes up in more focused songwriting, and a truly phenomenal production job that is hostile in its clinicness.

One of the other fundamental changes besides the more compact songwriting is the introduction of a cover song, and a ballad to conclude the album. “Obsolete” would be structured nearly identical as this record, and “Digimortal” would merely smooth out the production. In fact the drum production is often criticized for sounding too digital, although according to drummer Raymond Herrera this was mostly due to the triggering of his kit. The band’s sound has become more streamlined, with big choruses and emotive clean vocal parts. Fear Factory is still aggressive, but the music is clearly targeted at a groove metal audience instead of a death metal one. Seeing how Fear Factory was never very convincing as a death metal outfit this was perhaps a wise decision on their part. The piano melody that concludes ‘Zero Signal’ is a nice touch.

The cover song, a first for Fear Factory at this point, is one by UK noise rock band Head Of David. While it is a nice change of pace from the constant battering of the original material, it doesn’t help selling Bell’s cringeworthy clean vocals, although these are significantly more tolerable here than on the rest of the album. ‘A Therapy For Pain’, the band’s first atmospheric ballad, does away with most metal components outside of the bass guitar and drums, next to showcasing Bell’s limitations as a singer. Some of his softer chants are quite emotive and enjoyable, but his strained cleans are flat out terrible. ‘A Therapy For Pain’ ends with an extended ambient electronic section that is highly atmospheric. It is unfortunate that the band never explored this avenue further until fairly late in its career. As before all music was written by rhythm guitarist Dino Cazares and drummer Raymond Herrera, with Burton C. Bell writing all lyrics.

Two singles were released to help push the album, the signature track ‘Replica’ and the Head Of David cover ‘Dog Day Sunrise’. Promos videos were shot for ‘Replica’ and ‘Dog Day Sunrise’. Additionally, the song ‘Zero Signal’ was featured on the “Mortal Kombat” movie soundtrack along with other notable metal bands such as Napalm Death and Type O Negative. The music video for ‘Replica’ was an unlockable in the game “Test Drive 5”, and controversial racing game “Carmageddon” (itself inspired heavily by the 1970s Roger Corman exploitation romp “Death Race 2000”, directed by Paul Bartel) featured three Fear Factory songs with ‘Demanufacture’, ‘Zero Signal’ (minus the piano outro) and ‘Body Hammer’. An instrumental version of the titletrack was also featured in the game “Messiah”. The album was the subject of a re-mix by various techno/dance DJs in the form of “Remanufacture – Cloning Technology”. The remix album was more of a labor of love on the band’s part, as they had toyed with the idea earlier in their career, and “Remanufacture” is of little importance to the main part of the band’s discography. To date, it was the only album to receive such treatment. In fact there was so much remix material that part of it was released with the “Hatefiles” compilation during the band’s original breakup, that also led to the release of the canned “Concrete” sessions.

Similarly as with its debut “Soul Of A New Machine” Fear Factory initially worked with producer Colin Richardson. Originally slated to be recorded at an undisclosed studio location in Chicago the band reconvened at Bearsville Studios in Bearsville, New York when the booked facility wasn’t up to the required specifications for the sessions. During the sessions the band got noise complaints from the engineers of famed arena rockers Bon Jovi who were cutting their “These Days” album in one of the studio’s other rooms. Supposedly the loudness of the “Demanufacture” sessions was so severe that it was bleeding into Bon Jovi’s recordings. Producer Colin Richardson initially mixed “Demanufacture” but his guitar-centric mix was found to be unsatisfactory. Greg Reely, and Rhys Fulber were brought in to remix the entire album sessions amping up the electronic and synthetic elements in the process. Greg Reely and Rhys Fulber created the electronic sequences with additional input from Reynor Diego.

While the artwork of the previous album already tied into the man vs machine subject, the Dave McKean artwork that was commissioned for this outing is nothing short of fantastic. Symbolically representing man’s reliance on technology a human ribcage and spinal column are merged with a strip of barcode. Both have become inseparatable, and intrinsically linked with each other. Man’s reliance on technology will be his undoing. It is a powerful image that fits flawlessly with this being a concept album about man’s struggle against a machine-controlled government. That various atmospheric cues were taken from James Cameron’s “Terminator 2: Judgment Day” to introduce one or two songs fits the concept of the record rather well, and works wonders with the pristine but never sterile production. Aside from that there’s another reference to the Terminator mythos with the track ‘H-K (Hunter-Killer)’, which takes its name from the family of robotic aerial - and ground combat vehicles seen in the movie franchise.

“Demanufacture” is the key release of Fear Factory’s then-nascent career, and the standard to which all of the band’s later releases are measured. Its impact on the scene is undeniable, and its legacy is one that even the band that wrote it wasn’t able to live up to. The album spawned an entire subgenre, and a legion’s worth of imitators and copycats on both sides of the Atlantic. That the band made its one defining trait, Cazares’ rhythm-only staccato riffing, the center of its creative well is as much of a benefit as it is a detriment. All the songs are lively exercises filled to the brim with hunger and gusto, but the anemic riffing takes its toll especially towards the second half of the album. The limited riff palette in term forces Herrera, arguably the most talented member, into lukewarm patterns far below his skill – and technique level. Burton C. Bell’s clean singing, and some of the forced vocal lines that occur, would be better fitted for a more tranquil project. Despite all these reservations and critiques, it stands to reason that “Demanufacture” is considered a modern/groove metal classic for all the right reasons.