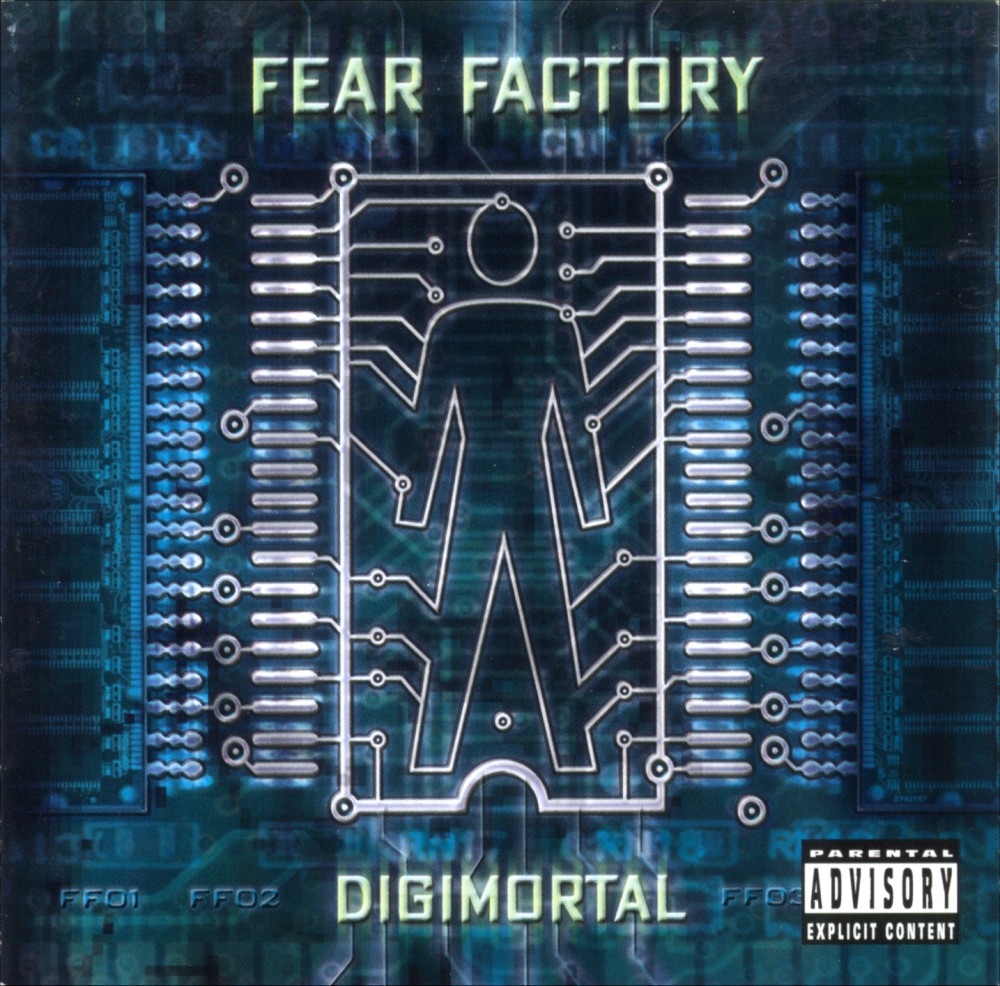 By the time “Digimortal”, the fourth Fear Factory record and last in the classic constellation, hit the market the band was riding on a wave of increased popularity and visibility. They were a beacon of hope in a creatively bankrupt subgenre. What should have been the band’s ultimate statement eventually ended up being their swansong. In retrospect it seems as if the ‘Cars’ cover on “Obsolete” was a harbinger of things to come. Forced by its then-label Roadrunner Records to write more radio friendly material the band was sabotaged creatively at every turn. “Digimortal” is the last chapter in its ongoing man vs machine narrative, and the end of an era in any number of ways. 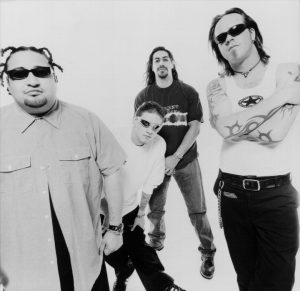 The album is a good deal heavier than “Obsolete” in terms of depth and range in the production work, but it continues the regression that defined that album as well making a few notable errors of judgment in itself. From a technical level it is the least guitar-centric and most vocal-hook oriented effort in the band’s early discography. There’s an increased presence of electronics, loops, beats and samples along with more attention in regards to prominent clean vocals, most of which are centered around choruses, or alternating verses. While the preceding Fear Factory works were hardly complex by any standard, “Digimortal” invests all of its energy in pop format song structures that it takes the wind out of what ordinarily would have been fairly powerful groove metal songs.

“Digimortal” retains the essence of the Fear Factory sound, but erodes it through lighter songwriting and capitalizing on the populist nu-metal/mallcore sound. A good number of the songs have the rhythm guitars in support of the pumping bass guitar and drum beats. While catchier overall it is not nearly as dynamic in terms of composition as the two albums that preceded it. As per the “Demanufacture” template, there are a number of (power) ballads. On here these are represented by the duo of ‘Invisible Wounds (Dark Bodies)’ and ‘(Memory Imprints) Never End’. The more typical Fear Factory cuts are relegated to the back of the album, with tracks like ‘Acres Of Skin’, ‘Byte Block’ and ‘Hurt Conveyor’. The exception to this rule is ‘Damaged’ which arrives early on in the tracklist, but is surrounded by poppier cuts that take away much of its impact and immediacy.

The riff construction and drums (in rhythms as much as its actual patterns) appear to be overly simplified to fit the verse-chorus song structures, and it is hard to shake the impression that these are mere skeletons of more engrossing, better songs. Each of the preceding records marked a regression from the last, and a further watering down of what once was a somewhat interesting and choppy death metal outfit. Where “Obsolete” had guest vocals by electro pioneer Gary Numan, here none other than Louis Freese (B-Real) from Cypress Hill provides a guest rap. B-Real appears on ‘Back the Fuck Up’, and on this cut even Bell does an illfated attempt at rapping. Which ends about as well for both as Ice-T’s lamentable appearance on the Six Feet Under album “True Carnage”. Their well-meant attempts to stay current with the tastes du jour end up horriby dating it in retrospect. None of it is ever truly terrible, but the guest appearance by B-Real doesn’t add anything meaningful to the song, or its corresponding album either.

This is the last in the original man vs machine triptych. Man and machine have become merged, unable to be separated without causing immense harm to each. The title is a portmanteau of ‘digital’ and ‘mortality’ in that man has created immortality through technology, but is no longer able to separate where man ends and machine begins. The lyrics in themselves are interesting enough, but the forced pop structures require fairly simple lyrics to fit the songwriting. Had the band been allowed to write what they wanted to write no doubt these songs would have been ten times more interesting than they are here. The album was pushed by two music videos, another properly budgeted effort for ‘Linchpin’, and a cost-effective live video for ‘Damaged’ were shot. The album was a commercial - and critical flop, and due to mounting interpersonal conflicts the band schismed shortly after the album’s global touring cycle was completed.

For the third time in a row the band opted to track the album at a different facility than the album before. “Digimortal” was recorded at Ocean Studio in Burbank, California with trusted producer Rhys Fulber. Further digital assembling and recording were completed at Armoury Studios in Vancouver, British Columbia. The band had originally planned to work with famed producer Bob Rock, but he declined. Toby Wright was subsequently approached, but he was committed to producing an Ozzy Osbourne record. Pre-production was completed at Studio Dee in Glendale, California with Malcolm Springer. Central to the writing sessions was the idea of simplification. While initially conceived as a non-conceptual effort it was later repurposed to fit the band’s ongoing man versus machine narrative. Bass – and rhythm guitars have an equal prominence in the production, although it undoubtly is Christian Olde Wolbers’ booming bass guitar that is the most interesting in the grand scheme of things. For all intents and purposes “Digimortal” is blessed with the glossiest production the band had ever experienced, before or since.

In the period of 1999-2002 Roadrunner Records was known to push its key outfits into more marketable territory. Along with notable victims Machine Head and Sepultura, Fear Factory also fell victim to this industry trend. It is something from which they never truly recovered as its output since then as been spotty at best. The band would later depart the label after the “Digimortal” debacle, and reconfigure itself. The result of this would be the release of the lukewarm but effective “Archetype” before experiencing a similar bout of executive meddling which effectively led to the band’s second breakup. Each of Roadrunner’s 90s key players underwent a similar trajectory, as a result of its meddling each outfit experienced its own identity crisis in trying to recapture the vibe that got them signed in the first place. The story of Fear Factory is one of many, but unlike a lot of its contemporaries they escaped their fate relatively unscathed.