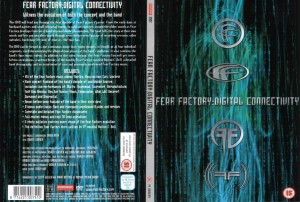 Along with label mates Sepultura Los Angeles industrial (death) metal combo Fear Factory was a major selling outfit for a majority of their tenure with Roadrunner Records. “Digital Connectivity”, the band’s maiden foray into visual media, is an embarrassing spectacle of a strong concept lulled into irrelevance through weak execution and pointless direction. The content in itself is interesting, but bad decisions and cutting corners that were typical of the Roadrunner label of the late 1990s/early 2000s mar the presentation and overall execution. This could, no, should have been so much more than it ended up being. “Digital Connectivity” is hardly the vital Fear Factory document that the label would like to make you believe it is. It is everything but…

As with the Sepultura DVD, this one is also a pseudo-documentary detailing the band’s small beginnings as a different sounding death metal act and works its way up chronologically to their then-new record “Digimortal”. In comparison to the Sepultura DVD it is clear that some effort was put into the overall design, and presentation. Instead of being one unabridged movie the DVD offers the possibility to view each of the band’s four album segments separately. Additionally there’s a load of bonus material in order to properly pad out the contents, and call it a “fan package”. The same problem that marred the “Chaos DVD” resurfaces here, as once again the actual content is on the meager side. While the DVD doesn’t lie about rare concert footage of the band’s early days, it is limited to a handful of songs. There’s no actual full-blown concert recording to be had, and the entire thing plays out as a pseudo-documentary. The interviews segments are brief, and don’t offer up a whole lot of useful information to novice and diehard alike. 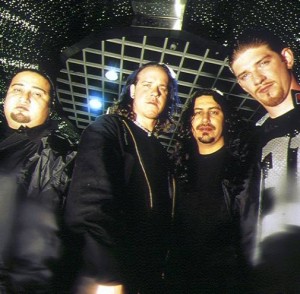 Each one of the four Roadrunner albums is represented by a unique logo sigil and it is accompanied by its corresponding promotional music video(s) and a swath of live footage, usually of incredibly varying quality in both image and sound. The chapters consist of a tiny “making-of” segment, the band talking about the songs/album in question, live footage and the promo video(s) for said album. Things are kept concise and never go into much detail, or length, so the pace is kept high. None of it is very interesting and since each album is only explored superficially (at best) the documentary on barely scratches the surface of each of its subjects. Fans wanting to learn something about the album will be left none the wiser on its historical context or its cultural significance. It’s not like we were expecting a “Classic Album” type dissection of the records here, but some kind of depth would have been appreciated. The DVD does neither, and unsurprisingly, it is exactly as shallow and vapid as you would expect.

None of the live footage/audio was doctored with in order to ensure its authenticity. While it captures the visceral concreteness and ferocity of the live experience a good portion of the details and nuances get lost in the untreated audio. The mixing is uneven in places, and downright problematic in a couple of instances. There are exceptions, such as the ‘Scapegoat’ live recording from Dynamo 1996, the MTV studios live rendition of ‘Self Bias Resistor’ and ‘Shock’ from the 1999 Japan tour. While the idea to include live footage of each album cycle is commendable, the absence of a full-blown, professionally filmed concert recording, rehearsal/pre-production footage or even actual behind-the-scenes studio material is a considerable loss contentwise. Had each chapter had its own behind-the-scenes/studio vignette, its corresponding music videos, and a vignette of the various band members, producers and/or label people talking about the significance of said release it would have added tremendous scope to what is now only shallowly hinted at. “Digital Connectivity” wants to be an in-depth examination of the band, along with selling itself as a “fan package”. In truth it is neither. It barely scratches the surface of its subject, and what the DVD covers is done selectively and without any standard towards covering each album/era of the band in any meaningful way

The entire early history of the band, including its trio of forgotten bassists (one of whom appears in the Dynamo 1996 footage) and the aborted “Concrete” sessions, is glossed over and brushed aside in an attempt to move faster to “Demanufacture”, the band’s breakout record for the Roadrunner Records label. Likewise, “Obsolete” takes a chunk of the running time, but the band’s then-recent “Digimortal” gets a more dedicated treatment compared to its arguably much stronger predecessor. Looking at it as a “fan package” the additional content includes a meager 8 audio tracks of previously unreleased b-sides and remixes. These tracks were later reproduced in full on the “Hatefiles” compilation two years down the line during the band’s original breakup. Other bonus content includes a complete Fear Factory discography, full motion menus and 3D logo animations along with a band biography written by Bell and 5 photo galleries covering each phase of Fear Factory’s stint with Roadrunner Records.

“Digital Connectivity” is a product of its time, and a label imprint in transition. What should have been an in-depth examination of one of the label’s top sellers is reduced to a home video collection. Each album of the Roadrunner Records era is represented, but none of it is ever detailed in any meaningful way. Each of the corresponding music videos are present per segment, but these were made largely obsolete in the advent of video services such as YouTube. In between these there are various, serious and tongue-in-cheek, interviews – but no new information can be gleaned from them because of their brevity. A lot of the interview segments appear improvised, or as an afterthought. Finally, There’s a swath of live footage of varying image and sound quality through out the band’s various treks across the globe, but none of it quite captures the intensity of a full-blown, professionally shot live recording. The DVD definitely has all the makings of a “fan package” on the surface level, but upon closer scrutiny the amount of actual content is on the thin side. In all there was a lot of unrealized potential with this foray into visual media, and whether label or band was to blame remains largely irrelevant. “Digital Connectivity”, like a lot of metal DVDs, fixates on style over substance, and that is a pity.