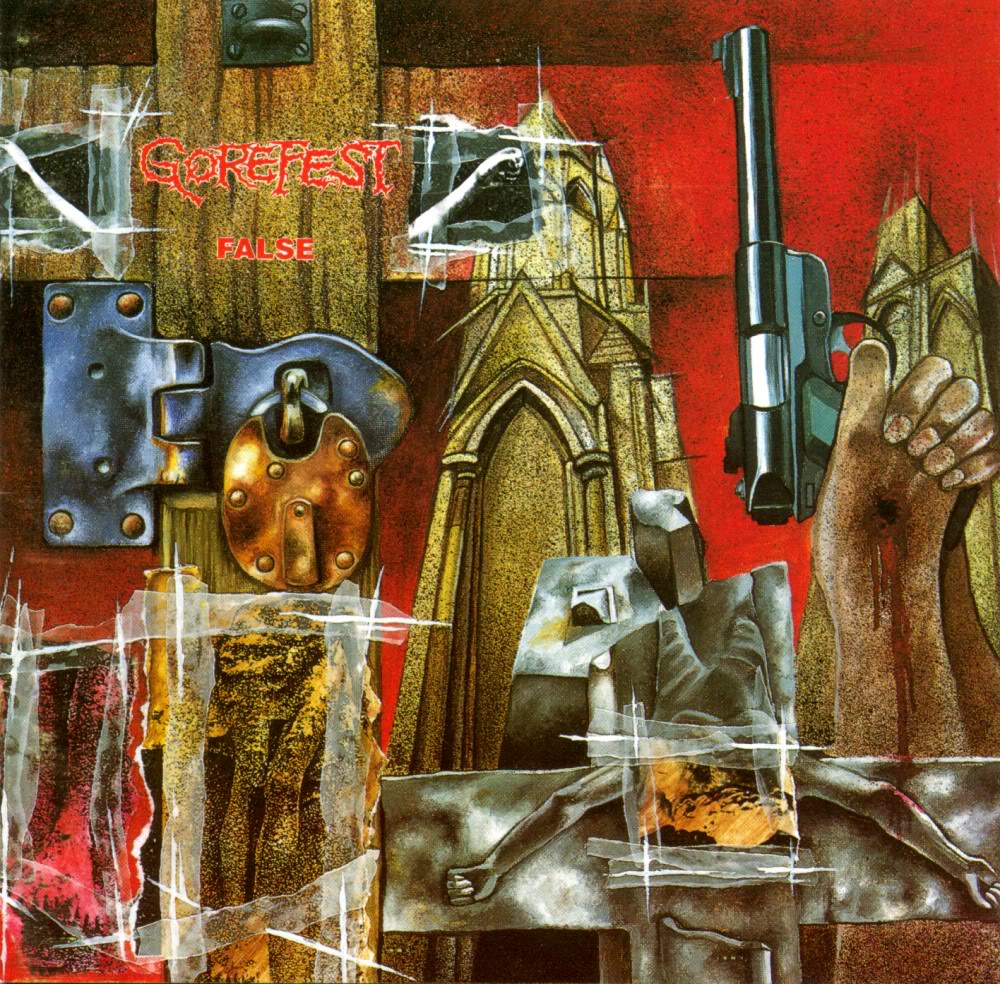 There comes a moment in every band’s life when they are forced to change either by choice or by circumstance. This is the time when they need to adapt to their surroundings in order to survive. For Dutch band Gorefest that time arrived when they were set to write and record their second album “False”. The Dutch death metal mavens Gorefest had taken in new perspectives and ideas from touring regionally with the celebrated Carcass and Revenant, and their second offering was bound to reflect those new experiences. “False” - the band’s second full-length release - differs significantly from their “Mindloss” debut. Not only is this album more mature musically and lyrically, it also is the band’s most proficiently and professionally executed product up until that point with producer Colin Richardson behind the console providing his finest work. 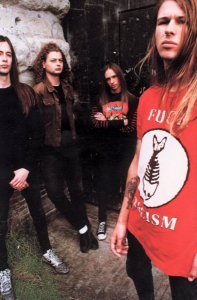 As a matter of providing the right amount of context and perspective we need to get some history out of the way first. Since “Mindloss” the band lost its rhythm section with the ousting of both main songwriter Alex van Schaik (guitar) and Marc Hoogedoorn (drums). There are conflicting reports on why exactly both members left, either by their own accord, or that they were fired from their positions. Sources note that van Schaik and Hoogedoorn were relieved of duty because Jan-Chris De Koeijer (vocals, bass guitar) and Frank Harthoorn (lead guitar) were dissatisfied with their level of musicianship. Other sources claim that Hoogedoorn was ousted due to a lack of interest. Whatever the case, Gorefest didn’t wane in the creative - and musical sense due to the absence of the duo’s input into the songwriting. In fact, their dismissal seemed to light a fire under the unit. Gorefest sounds more determined, more focused and hungrier than ever before. "False" was bound to sound different. Very different.

“False” is notable because it is the writing and recording debut for lead guitarist Boudewijn Bonebakker, whose sparkling and melodic guitar work would come to characterize the band in the years to follow. Ed Warby, the new man behind the drums, came into the band a mere two weeks before recordings were set to commence. To say that his arrival was met with trepidation would be an understatement, as he cut his teeth in traditional metal outfit Elegy. Despite all these reservations the two new recruits make a spectacular debut. Bonebakker trades off leads with Frank Harthoorn like he had been doing it for years and new skinsman Ed Warby is ten times the drummer Marc Hoogedoorn ever was. Whether playing at breakneck pace, or doom-like dirge tempos Warby does all without breaking a sweat. Overall his drumming is more sophisticated, better arranged and balanced than Hoogedoorn’s one-dimensional beats.

Freed of the restricting shackles of horror and gore, Jan-Chris De Koeijer writes about socially relevant subjects such as war, national-socialism/racism, the influence of mass media, the hypocrisy of organized religion and its practitioners, televangelism and the insignificance of the individual in a consumption-driven society that treats people as disposable goods. It can be argued that De Koeijer was no Chuck Schuldiner, and while it is clear that English wasn’t his first language, the subjects touched upon and their treatment at least are worth mentioning. Although this record was released two decades ago, the subjects they talk about are as relevant now as they were back then. This is the sort of stuff that this worthy of reflection anytime – back then, now and in the future

From the opening track ‘The Glorious Dead’ onwards one thing is clear. “False” is a far more structured and ambitious undertaking. Taking a cue from Carcass’ third album “Necroticism: Descanting the Insalubrious” the record opens with a sample, and the track itself is far more elaborate in construction and execution than anything this band has attempted prior. The riffing, while still primal and murky, is far more articulate and better phrased. There is a far greater reliance on dissonant chord progressions present, and the ancient thrash metal architecture has been fully abandoned at this point. Bonebakker’s presence brings the more traditional metal influence of Harthoorn’s writing to the surface, and his harmonized, neo-classical leads add a degree of intelligence previously unheard of in this unit. Warby’s drumming consists of a variety of styles and techniques that elevate the material tremendously in depth and texture. 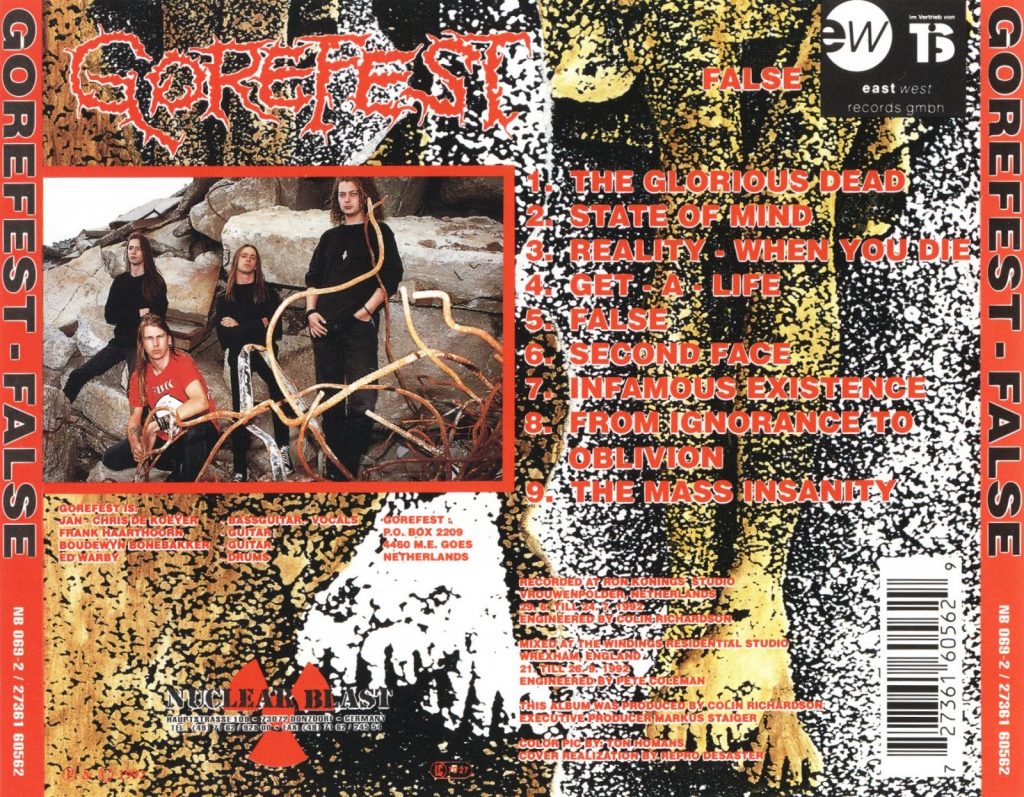 As hinted upon previously, “False” was more or less ahead of its time in 1992. The album is almost industrial in construction, with an emphasis on heavily rhythmic progressions and percussive density. The sludgy Autopsy/Cannibal Corpse sound is abandoned, in favor of a more streamlined, groove-laden approach to death metal that recalls Bolt Thrower more than anything else. The handdrawn artwork suggests a variety of topics the band deal with in their lyrics. Given that this album was produced by Colin Richardson (who had worked with Bolt Thrower, Carcass, Fear Factory, Massacre, Napalm Death and Sinister around this time) the production is evenly balanced for each instrument. The level of texture is deeper than it ever was, and the overall dryness of the whole production emphasizes the band’s rumbling low-end heaviness. The guitars possess a lot of body and are meaty, the bass guitar features more prominent than ever. The drums sound somewhat thin on the snares and toms, in my opinion, but they come with a level of clarity and definition not heard previous from this band. Jan-Chris’ vocals are less vomited, more grunted but a lot more commanding. They are actually incredibly well pronounced given what this vocal style would revert to in the decades to come.

The profound influence of “False” would become clear years down the line as various metal bands would come to appreciate its structure and overall form. Fear Factory’s debut “Soul Of A New Machine” was built from the same template, Napalm Death’s “Fear, Emptiness, Despair” took kind to the heavy rhythmic progressions, and the percussive density. Sepultura’s artistic death certificate “Chaos AD” would experiment further with the industrial framework that this record introduced. Brutal Truth’s “Need to Control” takes lesser direct influence from this record, although their single ‘God Player’ clearly is a nod to the writing and song construction presented on this album. Just to say that “False” not only was an important record in Europe, in America it was seen and heard too, and many leading bands later recordings reflect that in their own output.