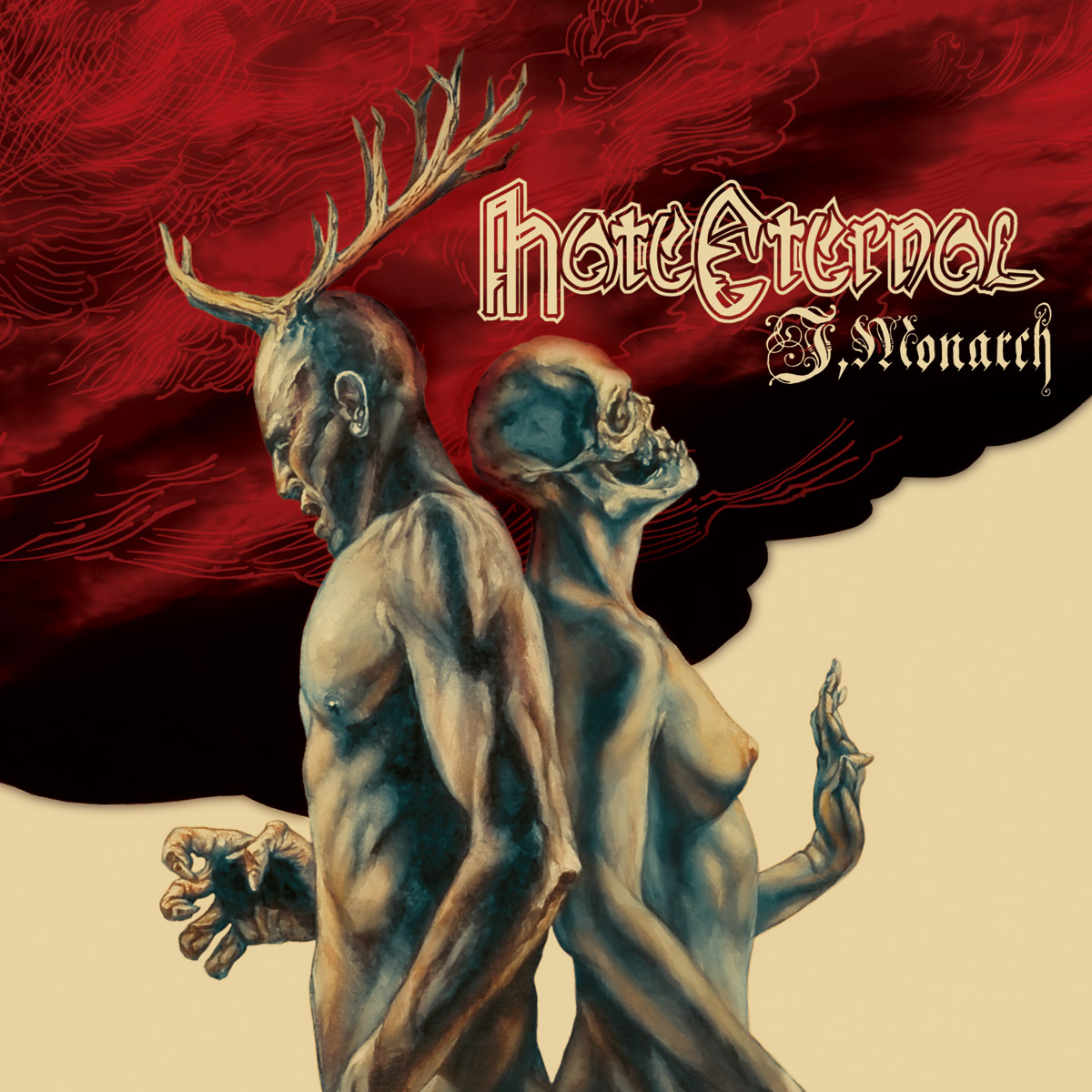 Whereas “Conquering the Throne” was a serviceable debut of a couple of noted underground musicians, it was “King Of All Kings” that truly elevated Hate Eternal to the upper echelons of the death metal genre, domestic and abroad. The constellation of Erik Rutan (vocals, lead/rhythm guitar), Jared Anderson (bass guitar, vocals) and Derek Roddy (drums) had delivered their breakout record, and now more than ever all eyes were set upon them to deliver on the promise of that second record. Somewhere during the touring campaign Anderson defected to deal with his substance addiction, and a temporary replacement was drafted in one Randy Piro. Once again holing up in Mana Recordings in genre hotbed Florida the trio wrote and recorded “I, Monarch”, the band’s third and most conceptually complete record up to that point. 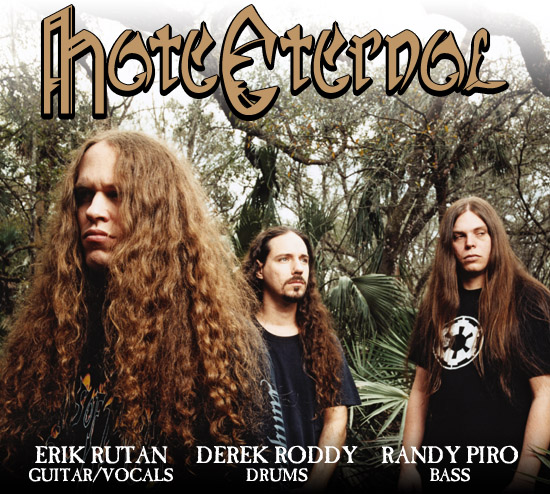 The third Hate Eternal album marks the end of an era for the band. It was the last record for long-time contractor Earache Records, the last to feature notorious drum mercenary (and budding solo artist/clinician) Derek Roddy and the sole record to feature bass guitarist/vocalist Randy Piro. It is the first record to feature artwork by Paul Romano, and the last of three records to feature royal connotations in its choice for album title. Functioning as the transitional record in between the two eras of the band, it is a punishingly brutal, and inhumanly fast but surprisingly diverse and groovy exploration of the sound Hate Eternal had perfected on the preceding two albums. The ornamental enhancements accentuate the band’s strengths and put more emphasis on the more developed songstructures. This can especially be heard in the instrumental track ‘Faceless One’, which is sadly the only such thing Hate Eternal has done to date. This more adventurous spirit is what makes this record so much more engaging than the competent but rather faceless two albums that came before. The right level of experimentation, and instrumentation make this record slightly different from the pure exercises of inhuman speed and technical expertise. The same can be said about “I, Monarch”, but it is wrapped in an atmospheric package from which it benefits.

Notable is that “I, Monarch” goes for a meatier, fuller production that recalls the band’s debut, but is far richer in terms of tone, depth and texture. Produced once again at Mana Recordings in St. Petersburg, Florida by Erik Rutan and Derek Roddy, it is here that the latter displays his own signature writing style, and has a crunchy production to match. For the first (and only) time the drums sound truly massive and commanding all while displaying the intricacies, precision and force with which they are played. It is unfortunate that it would be the swansong for drummer Derek Roddy. As always the bass guitar is buried underneath the thick sounding guitars, and drums. It is hard to judge exactly what Randy Piro contributes to these songs instrumentally, but at least vocally he is able to match himself with his much loved predecessor Jared Anderson. The riffs are much more interesting and engaging compared to the preceding two records, and they are of more significance within the better developed songstructures. The key strength of “I, Monarch” is that it isn’t afraid to slow down every once in a while, and put the tireless blasting of Roddy in service of the song – and not the other way around. Without a doubt it is Hate Eternal’s most diverse and accomplished recording.

It is by all accounts the most diverse and best-produced Hate Eternal record due to the use of atmospheric segues and better paced songwriting. An organic, crunchy production and each musician being at the top of their game in terms of writing and performance help immensely too. In essence “I, Monarch” is more closely related to “Conquering the Throne” in terms of construction than it is to its predecessor. What sets it apart from its predecessors is the usage of sampled segues taken from the track ‘Death Posture’ off the “The Secret Eye Of Laylah” recordings by Michael “Zos” Dewitt and Zero Kama, plus the didjeridoo that is heard in ‘To Know Our Enemies’. All of this is mostly superficial as beyond the more balanced and warmer production Hate Eternal has changed precious little in between this and the albums that came before. That isn’t necessarily a bad thing because too many bands seem to change with every record. On its first three records Hate Eternal perfected its traditional death metal sound in every possible way, and “I, Monarch” is the most representative of those changes. It is the record where the band finally showed what they were capable of as songwriters. “Conquering the Throne” and “King Of All Kings” (the former more than the latter) seemed to focus on speed and brutality almost exclusively. That is finally changed wth this third record, and the band is so much more powerful and, well, better for it.

If one was to approach the record without its atmospheric enhancements and instrumentation, what one is left with is an expertly produced but bog standard modern day death metal album. Thankfully Rutan’s former experience in Morbid Angel (and formative death metal act Ripping Corpse before that) has left him with a keen understanding of the genre’s dynamics and strengths. Where any lesser bands would fail Hate Eternal understands the importance of nuance and diversity. Nobody is going to argue that this band has a very specific, tunnel vision of what the genre should be – yet for with this third album (and the two that preceded it) they wrote poignant material within the perimeters they had set for themselves. The nuances primarily are found in the use of melody, a newfound diversity in its percussive assault and Rutan’s always sparkling Eastern sounding leads/solos. On top of all these marked improvements Rutan’s vocals are a lot better produced this time around clearly proving his ability as a frontman. In comparison to a lot of his contemporary peers his growls are well enunciated and never stray into unintelligible territory despite their impressive throaty depth.

Two videos were shot to promote the record. The videos for ‘I, Monarch’ and ‘The Victorious Reign’ were directed and produced by Shane Drake for Red Van Pictures. Of the two ‘I, Monarch’ is the most interesting as it combines the usual performance footage with a narrative of a sorcerer’s apprentice building a contraption out of human remains. The video for ‘The Victorious Reign’ is a typical performance video set in a warehouse. It is only memorable for the very brief spot where second live guitarist Eric Hersemann can be seen. Hersemann appeared prior on the Diabolic record “Infinity Through Purification” (which featured a similar but lesser interpretation of this record’s sound), and later would form psychedelic death metal act Gigan with fellow former Hate Eternal bass guitarist Randy Piro. On the successor to this record the band would enlist a new drummer, recruit a famous session bass guitarist and adopt a more bouncy sound. The classic era ends with this last installment of a three-album stint. One can only wonder what this record would have sounded like had Anderson co-written in the sessions.