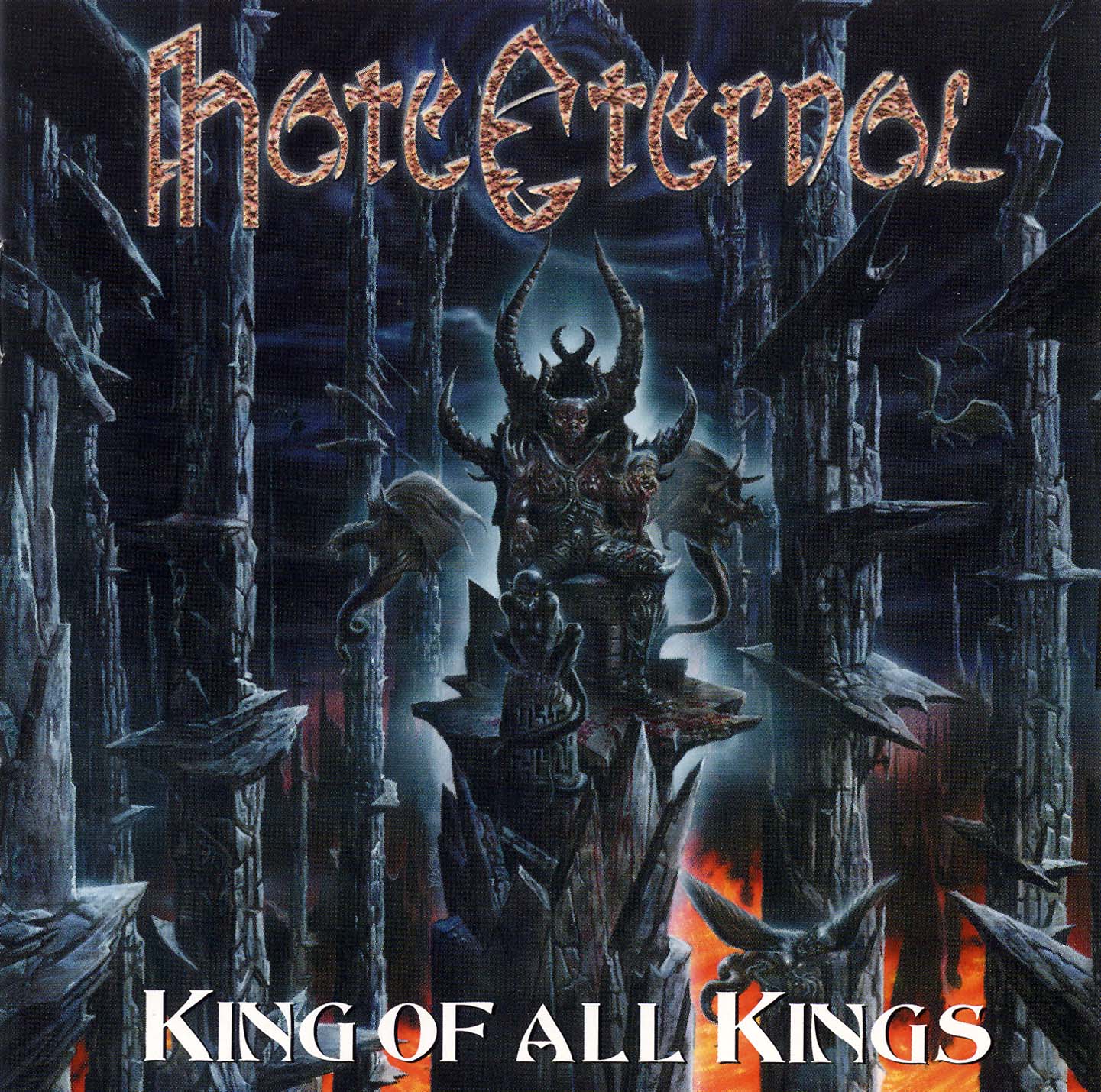 On its second record Florida tornado Hate Eternal settled into its own, and with the recruitment of South Carolina native Derek Roddy the unit found its most recognizable skinsman. Having cut his teeth in Malevolent Creation, Aurora Borealis and Divine Empire prior to his appearance on this album, noted mercenary Roddy is one of three elements that make this Hate Eternal’s fastest, lean, mean and most extreme record they ever put out. Like the debut this is the only record in this constellation, as Jared Anderson (bass guitar, backing vocals) would depart in order to commit himself to a drug rehabilitation programme. It is also the only album to feature artwork by Andreas Marschall (Blind Guardian, Destruction, Immolation, Kreator), and the first to be recorded entirely by Rutan himself at his own privately owned studio compound Dimensional Sound (later redubbed Mana Recordings) in the genre epicenter that was and is Tampa, Florida. 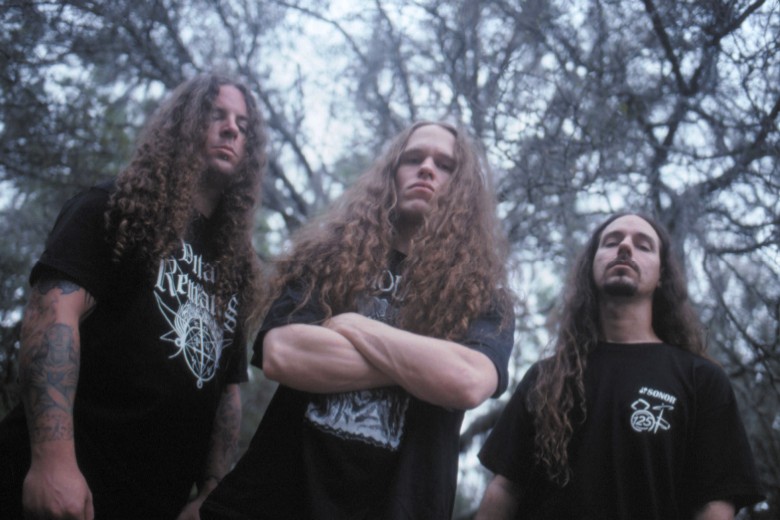 The album starts off with ‘Our Beckoning’, a fairly pointless and inconsequential intro track consisting of sound effects and pitch-shifted spoken word vocalizations. The album truly starts with the title track, a cut little under three minutes that displays Hate Eternal’s further mastery of its chosen style and a template for the rest of the album. One of the first things to notice is how different “King Of All Kings” is from the debut of a few years prior. This record, above all else, is about extreme speed more than anything. The addition of Derek Roddy fits perfectly with the objective, as he is more angular in style in comparison to his predecessor Tim Yeung, who combined blasts with rolls and fills. Another difference is that the riffing has been tightened up, and what was previously present in regards to ripping thrash metal architecture has been fully abandoned. As with the debut the bass guitar is seldomly heard, and although it adds significantly to the bottom end heaviness of this product, it’s hard tell how creative Anderson’s lines are as the crunchy and concrete sounding guitars dominate the production next to the drums.

It is the contributions of Jared Anderson that differentiate it with the record that preceded it. As in his own unit Internecine Anderson writes poignant, skin-crawling melodies that run under Rutan’s riffing. The tightened up riff construction and Roddy’s percussive propulsion makes “King Of All Kings” the defining moment in Hate Eternal’s catalogue, and the presence of its signature track ‘Powers That Be’, redefined what this type of death metal could be in the hands of capable musicians that understood its strengths. That isn’t to say that “King Of All Kings” is revolutionary or innovative, as it is still heavily redolent of Morbid Angel and the South American death metal sound of the Krisiun trio. That shouldn’t come as a surprise to anyone, as Rutan spent two months in 1999 producing that band’s third record “Conquerors Of Armageddon”. At that point everything for the first record had been written, so it is only natural that the influence would be felt on this album, the follow-up to “Conquering the Throne”.

The vocal interaction between Rutan and Anderson is far more pronounced here, and both share equal time behind the mic. It is here that Hate Eternal’s call-and-response vocal approach first appears in its full glory. The presence of Anderson was minimal on the debut, but here both men make their voice heard. Generally, Rutan has a lower register and his grunt is deeper overall, while Anderson sounds more piercing and throatier.

A common complaint is that all these tracks sound very identical, and to a certain degree this is in fact true. Hate Eternal has a very narrow vision in what it wishes to accomplish. There are a few tracks that do stand out for a number of reasons. ‘The Obscure Terror’ is pushed forward by a very rolling drumbeat. ‘Beyond Redemption’ has a stronger vocal presence of Jared Anderson, a memorable chorus and the track is his ideological vessel. ‘Chants In Declaration’ and ‘In Spirit (The Power Of Mana)’ are a tiny bit slower early on and during the chorus sections. ‘Rising Legions Of Black’ has also a stronger vocal presence of Anderson. ‘Powers That Be’ not only stands out because it is the single of this album, but also because of its lyrical deviation from the spiritual self-empowerment that many of this album’s songs deal with. Instead this track talks about the sudden disappearance of the Incan empire and culture and its impact on the wider world.  The real highlight of the album are the many esoteric and eastern sounding leads/solos by mainman Erik Rutan. His zipping solos are truly his own, and while the influence of Trey Azagthoth is hard to miss, it is wonderful to hear how much Rutan has developed his own style and technique. The absence of Doug Cerrito isn’t even a point and Derek Roddy’s recording debut with this band is as smooth as one can possibly imagine.

Recorded and produced entirely by Erik Rutan at his own newly minted Dimensional Sound facility “King Of All Kings” went on to become his calling card as far as production work goes. The biting guitar tone is less thick compared to the debut, but is increased in clarity, definition and crunchiness. The bass guitar is actually present in the mix but it is very hard to make out due to dominating presence of the rhythm guitars. It can be briefly heard in ‘Born By Fire’ and ‘In Spirit (The Power Of Mana)’, but that’s about it. Alas it is not the visceral throbbing Alex Webster (Cannibal Corpse) or Jeroen-Paul Thesseling (Pestilence, Obscura) tone that is to be found here. The drums sound less overly thick and meaty as was the case with the debut. In fact the snares and toms sound decidedly less thick, and the kickdrums don’t add much to the overall bottom end heaviness as they are rather thin. The drum production here is as far as one can get from, say, the drum production of Gorefest’s “Erase” record, or Sepultura’s “Arise”. The production is very guitar-oriented, and although more bass presence would have helped tremendously “King Of All Kings” comes with a sound that fits the music.

Debuting his new studio facility through this album (and its two companion pieces: Internecine’s “Book Of Lambs” and Pessimist’s “Slaughtering the Faithful”) Erik Rutan proves his valor manning the console. This album and the one to follow would eventually establish him as the new death metal metal producer that everybody wanted to work with in Tampa, Florida and beyond. The production is a definite step forward in comparison to the Wes Garren produced and Juan ‘Punchy’ Gonzalez mastered debut on all fronts. It obviously isn’t without its faults, but for a high profile release as this Erik Rutan’s work is more than commendable. For this record the band commissioned an Andreas Marschall painting for the cover artwork. That seemed the only logical choice as a Joe Petagno artwork would have sent this into Diabolic territory of unintended goofiness. Hate Eternal realized its potential early on, and worked to differentiate itself on the most important aspects. “King Of All Kings” is the signature record for this band, and it is one of the better representations of contemporary, high-speed death metal. It certainly was leagues better than the material Morbid Angel was putting out at the time.