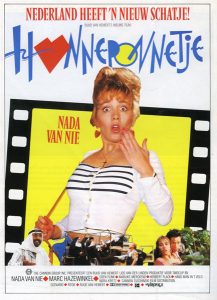 Honneponnetje (released internationally as Honeybun) was the third movie for director Ruud van Hemert who became famous for Schatjes! (1984) and Mama Is Boos! (1988). His two previous movies were satirical black comedies about the dysfunctionality of the typical 1980s Dutch nuclear family and saw the director dealing with his kids and with a particularly nasty divorce, respectively. Honeybun is much lighter fare as it is a rather straightforward raunchy teen comedy. Despite its naive charm and innocuous outlook on modern city life Honeybun would effectively bury van Hemert’s cinematic career for a good 17 years. Honeybun launched the career of Nada van Nie, the titular starlet – but in retrospect ended hurting her as she was typecast almost immediately after. 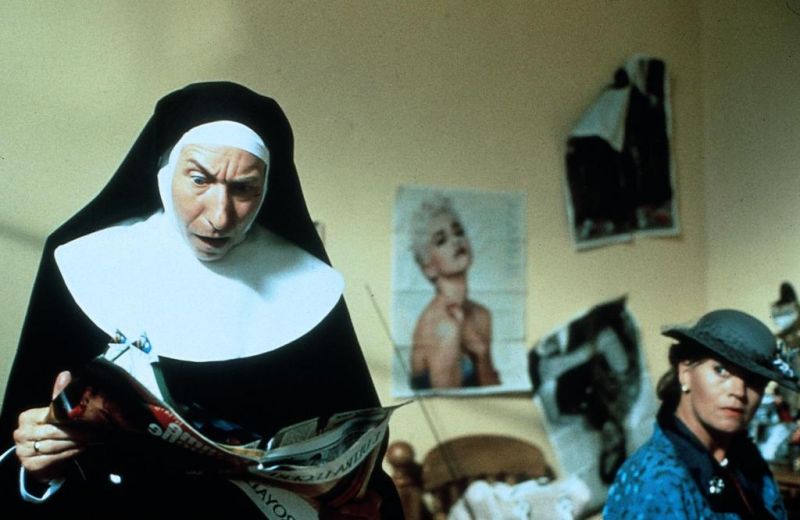 During the credit sequence we are introduced to Honneponnetje (Nada van Nie) in the middle of bathing. Since this aims to be a somewhat respectable movie Honneponnetje (Dutch word for Honeybun, or sweetheart) - a pupil at the strictly Catholic Anna Regina boarding school for girls, an elite institute presided over by a convent of uptight, pedantic nuns - is covered in a semi-transparent gown. Ensuring that the audience knows exactly the kind of humor Honeybun is aiming for, van Nie’s chest pops out, much to the chagrin of the nuns in congress, while reading a penny dreadful by the name of “Annet’s Liefdeszang” (“Annet’s Lovesong”) during morning mass. We learn that it’s Honeybun’s 16th birthday, and the tacky novel pushes her to discover the many wonders of the big city, in this case: Amsterdam.

Nada van Nie was a young television actress whose star had risen high enough to warrant an excursion into cinema. Van Nie was the daughter of filmmaker René van Nie, who wrote/directed 5 movies from 1974 to 1982. In the late 1980s, and mainly thanks to her work in Dutch and German sitcoms, Nada van Nie (who, like many a starlet, attempted to launch a singing career parallel to her acting) was held up as the new promise for Dutch cinema. Unfortunately her choice of roles would effectively kill her career in 1991. After the disastrous Intensive Care (1991) van Nie reinvented herself as a TV host (for RTL 4 and SBS 6), columnist (for Top Santé, Femme, and the saturday edition of VROUW Telegraaf) and as an ambassador for MYBODY. Van Nie has only acted sporadically since the early nineties. Not that her semi-retirement should be considered an irreparable loss for Lowlands cinema. 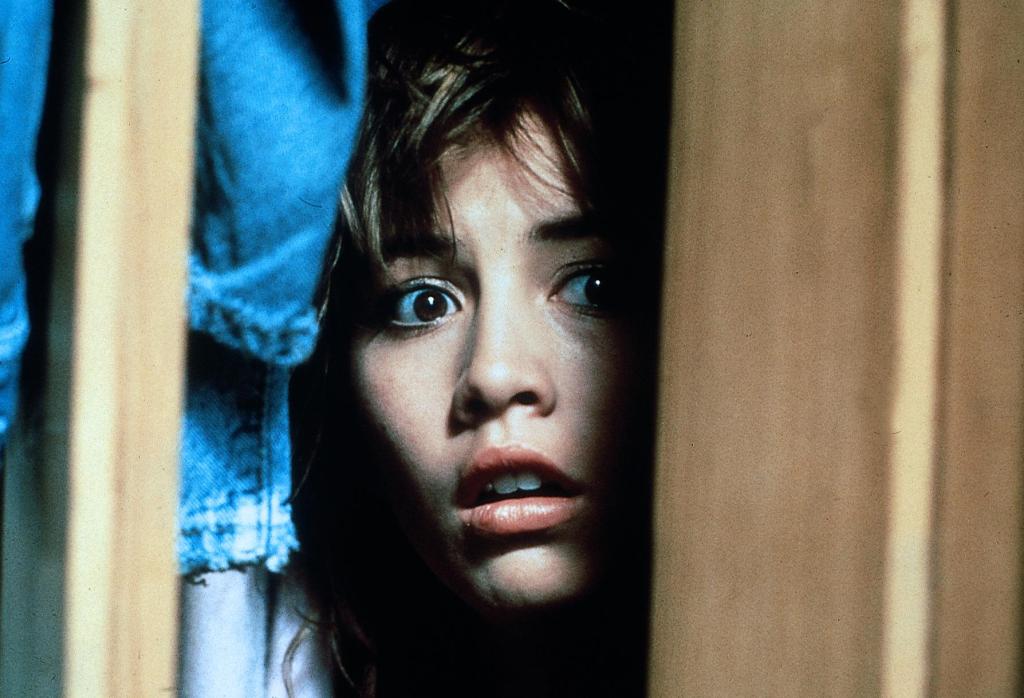 The screenplay, which isn’t exactly high art and banks almost entirely on van Nie’s considerable natural assets, is rife with running gags and stock characters. Van Nie’s Honeybun is your stereotypical good-natured but naive and not terribly bright small-city girl. Half of the movie’s gags revolve around the fact that van Nie has breasts. This is thoroughly emphasized when after having fled the boarding school Honeybun sheds her restrictive school uniform for the latest in candy colored 1980s fashion. The camera takes a good long look at van Nie’s plump chest ensuring that we’ve noticed that she’s wearing a crucifix, but not a bra. This is supposed to convey that she’s a good but naive Christian girl. Every male character, with exception of Harry (Marc Hazewinkel), almost without fault acts as a potential predator. At the end of the second act Honeybun meets an actual sexual predator, the entire thing is played for laughs for the most part. Another running gag is that every male, including Harry, will take a good long look at Honeybun’s chest, cos that is supposedly what passes for humor. Authority figures, be they law enforcement, the convent at the institute, or even parental figures, are more of a hindrance than help. Minorities are drawn in broad, often derogatory strokes. 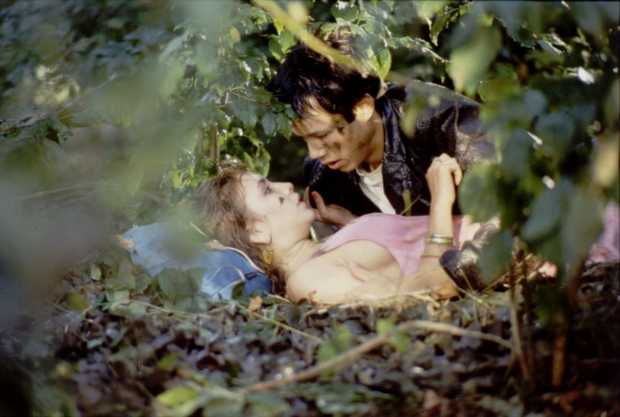 Characterizations mostly depend on all the known stereotypes. Harry is painted initially as a denim, leather jacket wearing bad boy – but he turns out to be the nicest male character by a wide margin. When Honeybun meets Apollo Romanski (Herbert Flack), a thinly-veiled caricature of Polish-American director Roman Polanski (who in 1977 was arrested and charged with statutory rape of a 13 year-old girl), a producer of adult entertainment who very much wants to audition Honeybun, is a sleazebag of the highest order. Flack is visibly having a blast playing the part as he parlays himself into giving Honeybun an oil massage in his ornately decorated loft. Both parents appear estranged from their daughter. In a scene that serves to set up a third act running gag Honeybun is urged to call home. When she does, her father interprets her demand for “loose change” for “ransom” in the movie’s cleverest linguistic joke. The script never bothers to explain why the disappearance of a random 16 year old girl would be a concern of National Security, nor why it would warrant a citywide lockdown, complete with the police force and military working together, and aerial support. 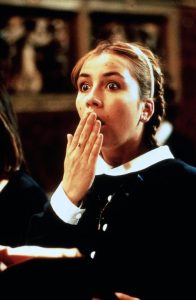 To its credit the screenplay does play up Honeybun’s interaction with the world and the people inhabiting it for maximum comedic effect. Most of the jokes are derived from the good Catholic girl's naiveté and sheltered upbringing. The most prominent of these are that every time another character says something racy/tacky/dirty, Honeybun will do the Sign of the Cross (as they do in prayer). In return, every time Honeybun says something unintentionally racy/tacky/dirty, Harry will spit out his drink/food. Parental - and authority figures are cursing all the time with a specific word, which roughly translates to “damn!” or “darn!" The police detective assigned to the case will always tell what time it is by looking at the arm opposite of the one his watch is on.

When walking around in a bad part of town, Honeybun is repeatedly offered drugs, or mistaken for a hooker – although not always in that order. Men and women alike lust after Honeybun. It's all charming and innocuous, if it weren't so downright insulting. The entire second act is contingent on conjecture by Mother Superior (Nora Kretz) that Honeybun must have been kidnapped following her disappearance from the institution. No one bothers so much as to canvas the perimeter, or talk to Honeybun’s friends at the Anna Regina boarding school. Then again, Anna Regina is such an elite institute that the nuns have to work construction in a wing under renovation during the off-hours. One of the second – and third act b-plots is that Anna Regina urgently needs a cash injection to finish up said renovations on some of its wings. As it turns out Honeybun’s parents (Hans Man in ’t Veld and Marijke Merckens) are, of course, the prime benefactors. An eleventh hour ecclesiastical rescue mission would be lifted almost wholesale in Sister Act (1992). 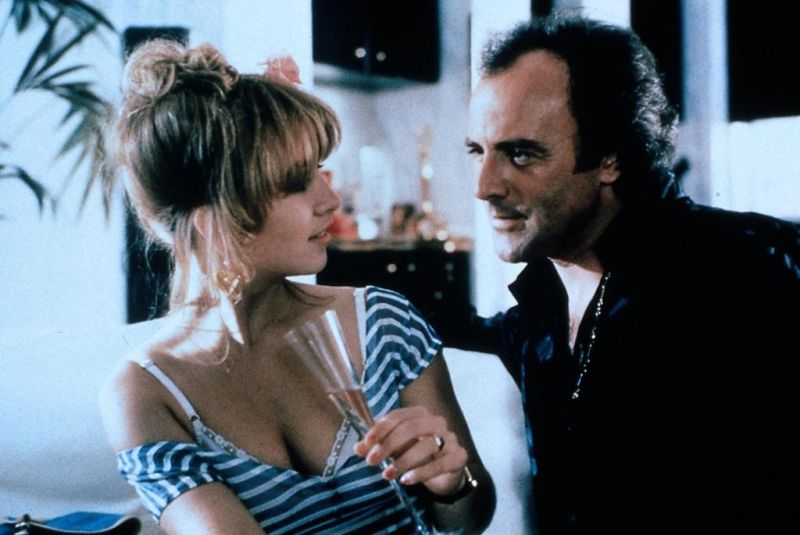 Scene-to-scene continuity is shaky in parts. In a chase scene early on the weather is alternatively either a torrential downpour or completely dry. Harry sustains a minor head lesion that curiously changes place as the movie progresses. As a lead up to one of the gravest continuity errors (one perhaps kept in to appease the censors) Honeybun sheds her figure-fitting pink top in Harry’s apartment. This leads to the iconic scene where she observes her magnificent globes in the mirror for the first time to her own general wide-eyed bewilderment. Later when Honeybun is sleeping Harry gives in to temptation and snaps a polaroid picture of his half-naked and uninhibited guest. Even though she was clearly topless when the picture was taken, the finished polaroid strategically covers her most visible assets. For some reason Honeybun’s top is back on when she wakes up the next morning. As Honeybun was aimed at a teen audience it never becomes sleazy or smutty. It would have benefitted tremendously from abstaining from its heavy-handed moralizing. 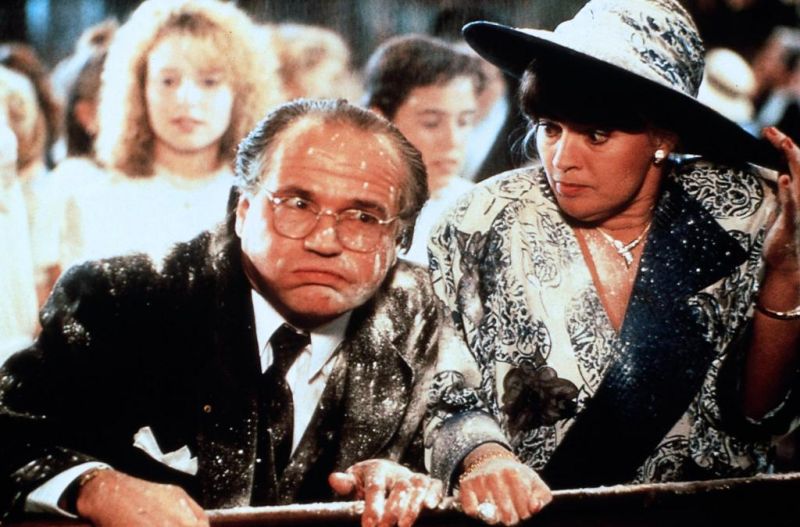 Honeybun is regarded as the second to worst Dutch movie ever, even though it attracted a respectable 300,000 viewers at the box office. Filmed in Amsterdam, the Netherlands and at the abby Bonne-Espérance in Vellereille-les-Brayeux, Belgium – it launched the brief career of starlet Nada van Nie. Open casting sessions were held at Hotel Krasnapolsky in Amsterdam, van Nie won the part without having officially auditioned. Nada van Nie was 21 at the time of the shooting. The wide-eyed, and nubile Nada van Nie isn’t much of an actress and is more famous for her considerable chest and posterior than her acting skills. Kenneth Herdigein was cast for the role of Harry, but he hurt his knee jumping off a ladder for a scene. He was replaced at the last minute by Marc Hazewinkel. The movie was distributed in North America by Cannon Films, the (now-defunct) company owned by trash moguls Menahem Golan and Yoram Globus, as Honeybun. Cannon Films specialized in action b-movies, but dabbled in a variety of other exploitation subgenres. Honeybun was released the same year as the Jean-Claude van Damme actioner Bloodsport. Nada van Nie would star in the infamous Dutch-Belgian horror co-production Intensive Care (1991) some three years later. No wonder van Nie would act only sporadically after crashing so legendary and so spectacularly...