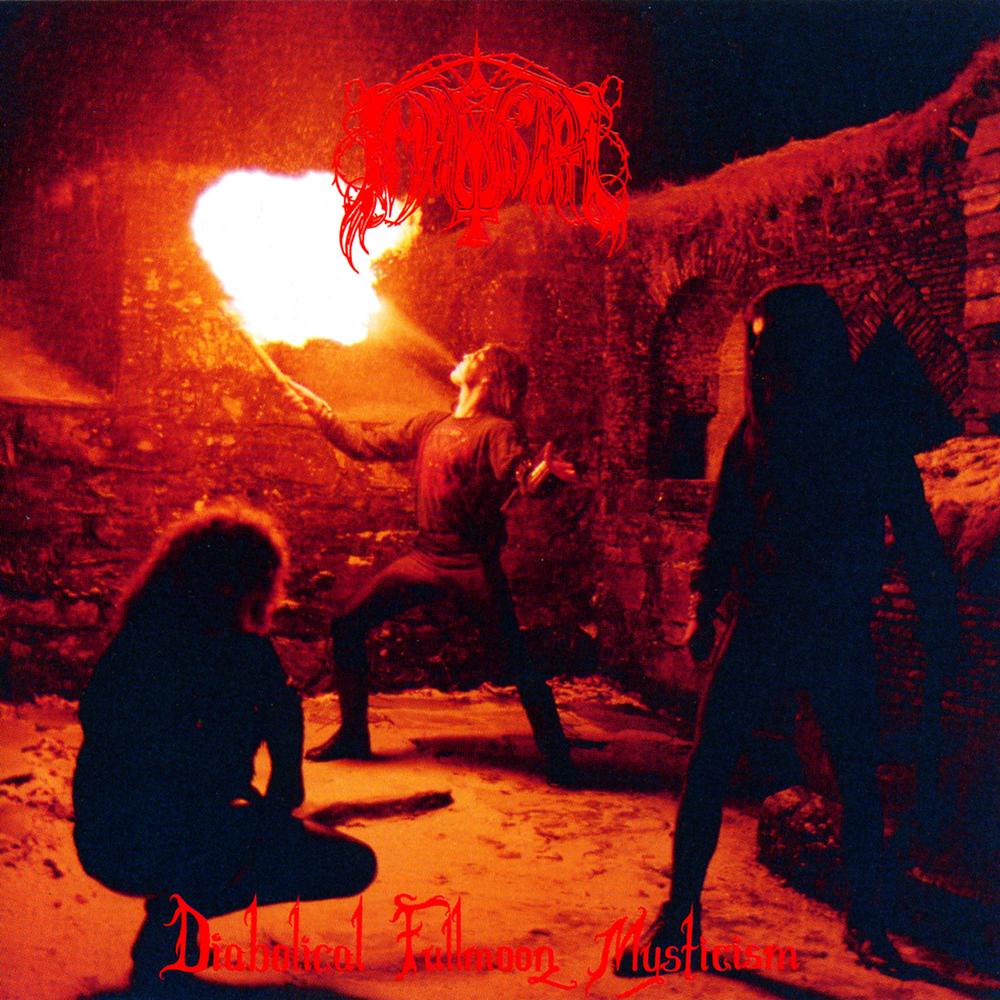 Immortal’s entry into the then-emerging world of black metal was as typical as many of their fellow bands. Coming from a death metal background with Old Funeral (in which both members spent time), and before that Amputation – it was at the behest of Oystein Aarseth from Mayhem that these men changed alliance to the new, and more extreme sounding black metal style. The band is centered around the duo of vocalist/multi-instrumentalist Olve Eikemo (Abbath) and lead guitarist Harald Nævdal (Demonaz). Steeped in death metal influence this little heard, or often neglected debut “Diabolical Fullmoon Mysticism” is a curious little anomaly in the band’s first era. Immortal, who would make a name for itself with the two records following this one, plays much slower and is more atmospherically inclined at this point. The tradition of using a stylized band photo as cover artwork is started at this juncture, and this would merely be a steppingstone for the next two much more violent and purely black metal records.

With the opening cut (after enduring a fairly pointless and entirely forgettable intro, aptly called ‘Intro’) ‘The Call Of the Wintermoon’ Immortal lays its card on the table. One thing that is instantly notable is that this sounds a lot like shortlived Norwegian death metal outfit Old Funeral. There are differences, most clearly in the vocal department, as Abbath here delivers his most devilishly shrieking performance. Compared to later Immortal recordings the tempo is fairly low and somewhat meandering. Outside of the blast section in the opening this track sounds a whole lot like standard European death metal with minimalist, colder, sharper riffing and croaking frog vocals, the prominent bass guitar riffs of vocalist Abbath only serve to consolidate this observation.

This is the only album to feature drummer Gerhard Herfindal (Armagedda) and it is notable for not fully realizing the band’s winter and ice concept with which they would become identified just a few years later. Together with the intro, there’s also sparse usage of the acoustic guitar in ‘A Perfect Vision Of the Rising Northland’. In terms of riff construction the band draws heavily from Swiss genre-fusionists Celtic Frost, Bathory and Mayhem’s earlier death/thrash hybrid as it was heard on the “Deathcrush” EP. Along with Herfindal’s decidedly more death metal drumming, and the lower overall tempo in that area make “Diabolical Fullmoon Mysticism” the most debated album in the band’s extensive catalogue. Immortal had not yet decided what exactly it wanted to be.

There are three strong tracks after the intro, and the album peters out a bit in the middle with ‘Cold Winds Of Funeral Dust’ and ‘Blacker than Darkness’. Both songs not only sound incredibly similar, but both fail to offer up a significant payoff. Thankfully the epic ‘A Perfect Vision Of the Rising Northland’ makes up for the relative inertia of the preceding two tracks. The track is introduced with a frail acoustic guitar bit, and includes some spoken word parts, which greatly add to the atmosphere of Northern darkness and desolation. Overall “Diabolical Fullmoon Mysticism” is a serviceable early black metal record that gets by on the graces of its novelty factor. The band’s transformation from death – to black metal band was mostly complete, but traces of the earlier style obviously remain audible in key departments and overall architecture.

Only with the next album would Immortal fully transition into the style that would make them famous the world over. Immortal also was one of the earlier Norse black metal bands to self-produce relatively primitive but good looking music videos, and for this record they shot a somewhat comical promotional video for the track ‘The Call Of the Wintermoon’, which sees the band cavorting in a forest in tophats and capes. The band would continue this practice for the next album with a live performance video, before going a more stylish and professional route with its third and ultimate offering. 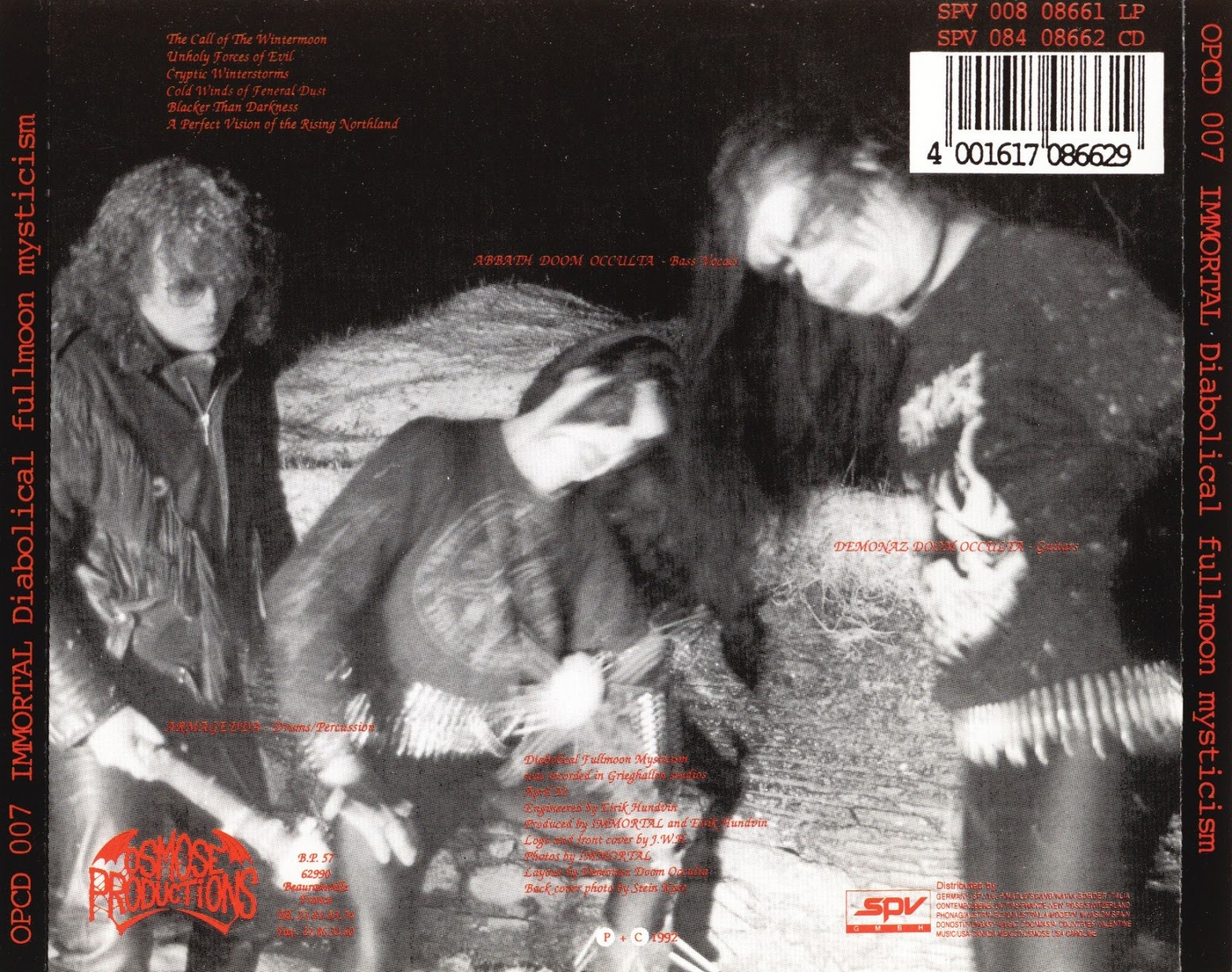 As Immortal was in its early stages here it is not surprising to notice that a lot of the tracks are long and don’t really go anywhere. This defect would be rectified in future albums as the band cut their songs down to more standard length, and distributed its ideas more evenly across the album in question. Most tracks go anywhere from 4 minutes to 6 minutes, with the lone exception of ‘A Perfect Vision Of the Rising Northland’ clocking in at a mammoth 9 minutes – and ‘Cold Winds Of Funeral Dust’ not even reaching the 4 minute mark. The band’s concept of winter, evil and ice was still forming at this point, and would not come to full fruition until the follow-up to this record, the uniformly savage “Pure Holocaust”. The fantastic Blashyrkh concept would only fully arrive with the band’s third album, the crude sounding “Battles In the North”.