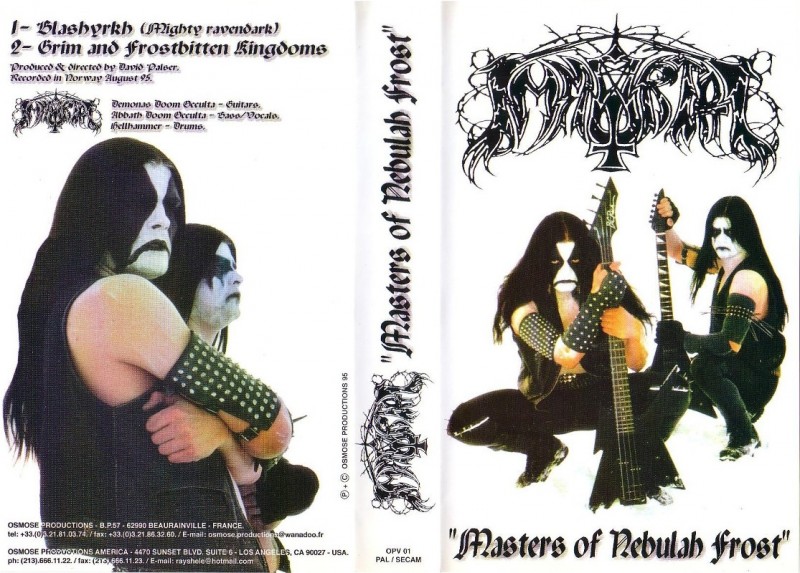 “Battles In the North” was the breakout album for Norwegian duo Immortal. It crystallized their sound into its most savage, unrelenting and pummeling format while retaining the band’s underdeveloped and underplayed atmospheric folk edge. Having always produced promotional videos for each of their albums, with “Masters Of Nebulah Frost” the duo had finally the chance to work with a production company and a professional video director with David Palser. Based upon his work here Palser would spend 1996 working with the likes of Burzum, Diabolos Rising and Impaled Nazarene. Along with Dark Funeral from Sweden, the duo was among the earlier black metal groups to have a professionally shot promotional video to support their album in the visual media. “Masters Of Nebulah Frost” compiles both these videos, and nothing more.

Blashyrkh (Mighty Ravendark)
This video is the most technically accomplished of the two. The video features a variety of landscapes, and rather modest but good-looking visual effects. The song’s slower tempo, and the absence of many lyrics make it a showcase of Norwegian nature rather than the actual band. The video capitalizes on the breathtaking vistas that Norway offers, and it is littered with amazing shots of mountains, trees, lakes and snow-covered landscapes. Exactly the things that Immortal spends a good portion of time singing about. In the beginning of the video there’s a small segment where Abbath “fist-punches” in unison with the kickdrums that start off the song. It is a small scene, but it adds a lot.

Demonaz is his usual self, although he wears a white band-aid on his arm in the establishing shots that seems to disappear and reappear at random intervals. This gap in continuity is not a big fault, but it stands out. The video is a typical performance video with the band playing their music in a variety of landscapes. Interspersed with the song are images of a flying raven, and one actor portraying Blashyrkh for two seconds. This is probably the most expensive and expansive one of the two promotional clips presented. As with low budget productions is usually the case, there are various scenes in which the band is overlit. The focal point is obviously vocalist/bass guitarist Abbath, who spents a good deal of the time making spooky faces, and has occasionally stick his hair to his corpse paint. This results in momentary lapses of awkward headbanging as he tries his best to unstick his hair from his corpse paint. The same rings true for Demonaz, whose black hair tends to get stuck in his inch-long arm spikes or on his corpse paint.

Director David Palser knew what images to capture. During the song’s folk break with the acoustic guitar and the church organ, we see Abbath traversing the snow in a trenchcoat that is overlaid with images of a raven’s eye opening and closing. Following is another shot of Abbath on a mountainside, again in his long trenchcoat, which is followed by a close-up of him looking grumpy. The segment is concluded with a shot of Abbath looking heroically over the mountainside, just before running down the mountain’s stone-filled face to join Demonaz for the extended solo section. It is kind of endearing to see Abbath waiting for his cue to start running, and to see the camera follow him along while trying to retain a stable, static shot of what is happening. Another fun fact is that none of the instruments are linked to any sort of amplification.

Grim and Frostbitten Kingdoms
For this session Immortal called upon Jan-Axel Blomberg (Hellhammer) to sit in as drummer for the video shoot, although he had no involvement whatsoever with the recording from which this cut is culled. The video is limited to one location on a glacier, along a body of water. The camera work is static, and outside of a few close-ups of every individual member, there isn’t much to make it stand out from similar videos. Abbath and Demonaz wander around in a circular motion before the drums. Blomberg wears blue eyeliner and a shirt reminiscent of Cradle Of Filth’s “Dusk… and Her Embrace” photoshoot, and he really has no business being here at all. The preceding video worked perfectly fine without a drummer, so this one should as well. This second promotional video was shot by the same production company and the very same director, so it is a bit puzzling why they suddenly felt the need to include an extra body to fill up the cast. The inclusion of grainy and underlit live footage from a club show doesn’t help matters either, as it adds absolutely nothing of worth to the production values of this clip.

The biggest mistake on the director’s part was the inclusion of and fixation on a few key shots, mostly close-ups, wherein it is suggested that Abbath is encased in frost when singing his parts. The kicker is that the camera appears frozen, and the lens is full of drops of water and condensation. Either that, or he was singing under a piece of frozen glass. Not only does it look amateurish; it shouldn’t have been allowed to happen in a professional production. The band is playing on a deeply frozen glacier. The point that Immortal is, conceptually, all about snow, frost and ice is thereby thoroughly conveyed in a visual manner. In other instances the band, once again, is overlit in crucial parts. In the latter part of the video, and in wide shots, it becomes hard to see drummer Blomberg, due to the blinding reflection of bright daylight on the all-covering snow. 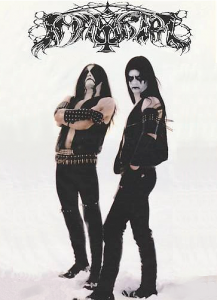 “Masters Of Nebulah Frost” wasn’t an ambitious release by any stretch of the imagination. Feeding into the mystique of the Immortal duo it merely compiles the two videos of the “Battles In the North” studio session. Osmose Productions could have remastered the two videos of the preceding two records, but chose not to. Neither did they include any live recordings, rehearsal footage, studio outtakes or a retrospective interview with the band about their career at that point in time. As far as the design of this release is concerned, this was done on the cheap too. The photography from the “Battles In the North” album shoot is reproduced in whole at exactly the same places. There surely must have been other, brand new shots of this photoshoot that could have been used to make this VHS look more original and interesting.

This was originally released on VHS in 1995 around the same time as the “Battles In the North” album. A couple of years later it was re-issued as a DVD, since the VHS format had become obsolete at that point with the emergence of the new visual storage format. It is interesting as a companion piece to its corresponding album, but nothing more than that. In all, this could have been far more than what we actually got. A pity, really.