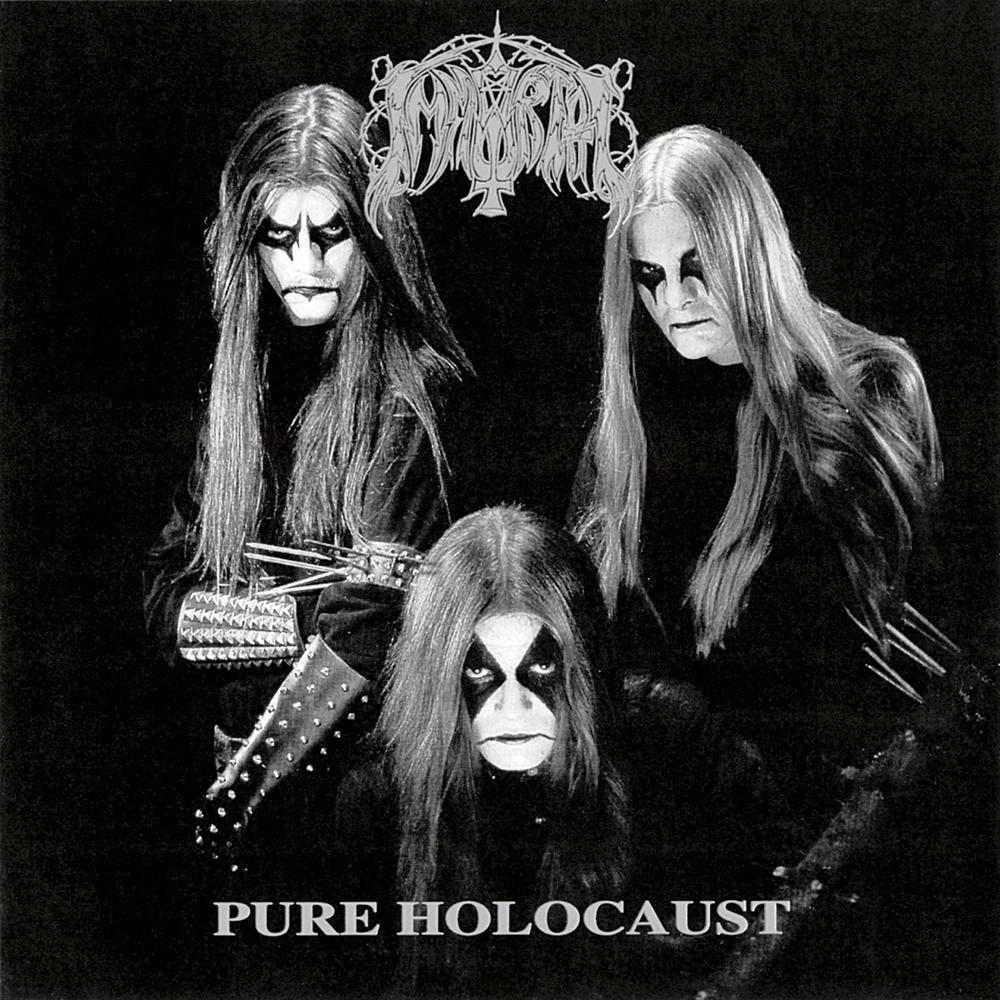 With its second album “Pure Holocaust” Norwegian band Immortal comfortably transitioned into its known style. Whereas “Diabolical Fullmoon Mysticism” was slower, drenched in death metal stylings and generally on the atmospheric side, this new album is anything but. It is here that Immortal adopt its barbaric, minimalistic style of black metal with Abbath coming into his own, vocally as well as making his recording debut behind the drumkit. Although the cover depicts drummer Erik Brødreskift as part of the recording line-up, he was only involved as a session drummer for live work.

Different from the preceding album is that “Pure Holocaust” wastes no time in getting to the point, kicking off with ‘Unsilent Storms In the North Abyss’.  From the onset it is clear that Immortal sounds far more barbaric and leaner here. Having trimmed off all fat the eight songs of this record lay down the foundation for their third, more conceptually ambitious record “Battles In the North”. Abbath forgoes the shrieking and settles into his croaking frog vocal style, while Demonaz’ fluid riffing is far more minimalist and cold sounding compared to the thinly-veiled death metal riffs of the album that came before. Notable is that only ‘Frozen By Icewinds’ and ‘As The Eternity Opens’ contain a chaotic solo, something which was rather abundant on the band’s debut, but not so here.

Coming further into fruition is the band’s winter, frost, snow and ice concept, which songs as ‘Unsilent Storms In the North Abyss’, ‘The Sun No Longer Rises’, ‘Frozen by Icewinds’ and ‘Eternal Years On the Paths to the Cemetary Gates’ chronicle in loving detail in the lyric sheet. This difference in subject matter was rather unique at the time, and remains so to this day. The fantasy theme of Blashyrkh is already here in anything but name, and the subject is painted in brush strokes. In 2003-2004 US studio project Imperial Crystalline Entombment (leading to the fitting acronym I.C.E), uniting members of Divine Rapture and Aurora Borealis, paid homage to Immortal’s winter concept as they lifted it wholesale for their sole album “Apocalyptic End In White”.

Although “Pure Holocaust” is notably faster than its predecessor, there’s still a healthy reliance on midpaced sections and slow parts. Much of that would be abandoned on the next album, as tracks as ‘Eternal Years On the Paths to the Cemetary Gates’ attest to. Abbath’s recording debut as drummer is nothing short of impressive. Abbath is far more versatile than previous drummer Gerhard Herfindal in terms of speed, technique and fills. His endurance is jaw-dropping as many of the drum parts contain extended foot-blasting on the kickdrums and fairly elaborate fills to go along with those. This is one of two albums where Abbath provided studio drums, and his work here is leagues better than the somewhat amateurish battering that would grace the next album. In terms of production this is the most balanced sounding record of Immortal’s early catalog with outstanding work from Grieghallen Studio resident producer Eirik ‘Pytten’ Hundvin.

Along with growing musically and conceptually, the band’s signature cover art has grown in scope. The previous album had a goofy looking fire-breathing picture (probably inspired a good deal by the firebreathing picture of Bathory’s Quothorn) of all three members, here the band settles for a stylish black-and-white portrait. Central to the picture are Demonaz (on the left), Abbath (center) and live drummer Grim (on the right). Centered above the portrait is the classic Immortal logo, which was refined a bit from the one seen on “Diabolical Fullmoon Mysticism”. A fun observation is that all three men have dyed their hair black for the album cover, yet with the live video for ‘Unsilent Storms In the North Abyss’ it can be clearly seen that all three men are natural blondes.

“Pure Holocaust” is above all else a transitional album for Immortal. With the winter concept coming in bloom, and the newly adopted minimalistic style, it was not surprising that they decided to brand this “holocaust metal” in order to differentiate themselves from many similar sounding bands. Although not radically different from comparable hordes as the Swedish duo of Dark Funeral and Marduk – Immortal has more of a German thrash schwung to its riff set, and there is a sense of immediacy and urgency that is closer related to Australian early war-metal combos Corpse Molestation and Bestial Warlust than it is to any of their regional contemporaries. The album itself would be an important influence on American death/black metal outfit Angelcorpse, who accentuated the ancient German thrash influence to a more audible degree, although they clearly lifted their foundational concepts there.