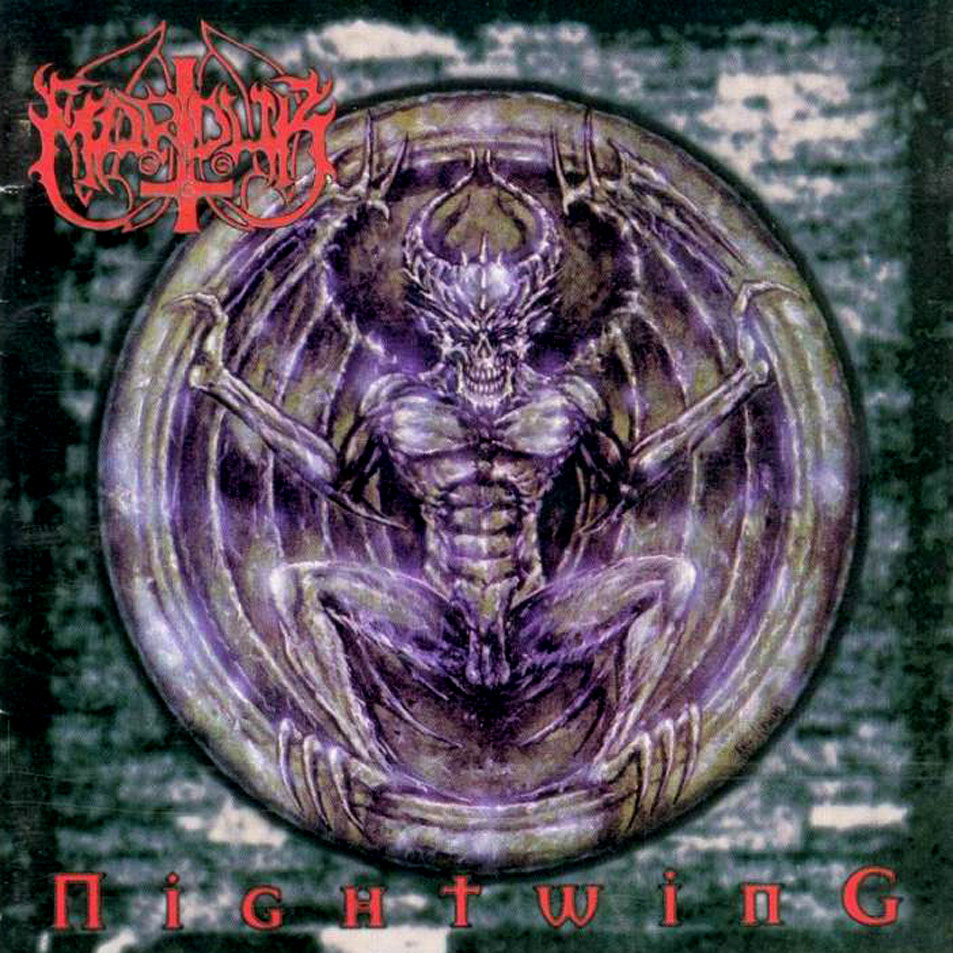 By the time “Nightwing”, the fifth Marduk album and second with vocalist Erik Hagstedt (Legion) behind the microphone, hit the market the band had become familiar with its new style. Released a year after “Heaven Shall Burn…” it is a continuation of that album’s sound with overall increased levels of density. The line-up remained identical from the preceding album, and that internal stability paid off dividends in terms of consistency, and performances from each of the members. While it does not quite have the same impact as it its immediate predecessor “Nightwing” is a reliable but unimaginative follow-up to a great breakthrough album. It is, however, the last good Marduk album for quite some time, as the band would fall into a rut and lose steam shortly after its release.

To say that “Nightwing” is intense would be an understatement. The performance of drummer Fredrik Andersson borders on death metal territory considering the breakneck pace and percussive density he brings in said department. The bass-heaviness of Marduk’s early albums is carried over, and Bo Svensson (B. War) provides thick, oozing licks that propel the riffs from mainstay and creative force Morgan Steinmeyer Håkansson to the front all while holding down the bottom-end heaviness. Two albums into his tenure with the band Erik Hagstedt (Legion) delivers his last worthwhile performance, as his voice would rapidly deteriorate on the successors to “Nightwing”. Some of the lyrics reek of process and latter-day Deicide (say “Serpents Of the Light”) too with memorable passages as: “Slay the Nazarene / Die, die, die!” Both ‘Of Hell’s Fire’ and the aforementioned ‘Slay the Nazarene’ have particularly poor lyrics to go along with the highly efficient but hardly exciting Norsecore. Was a bit of eloquence and verbosity too much to ask in black metal at this point in time? The theological sub-branch of the genre was still a couple of years away from exploding – but other big name bands such as Ancient Rites, Dissection and Emperor were lyrically more ambitious. 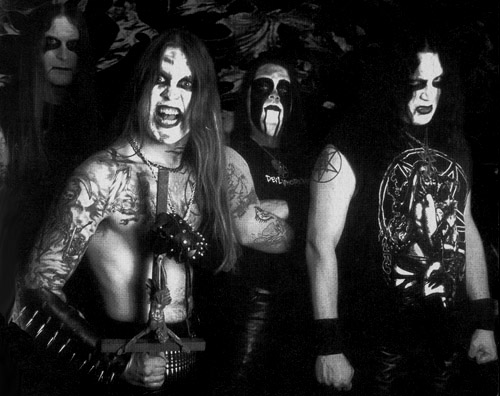 “Nightwing” is divided into two specific chapters. The first four songs encompass the "Dictionnaire Infernal", Marduk’s now patented attack on all things religious. Chapter two "The Warlord Wallachia", comprising of the last four songs, further fleshes out the Vlad Tepes narrative of the preceding record. ‘Nightwing’, the title track, is omitted from the tracklist altogether as it fits with neither chapter. “Nightwing” is the second part of the ‘blood’ chapter in an abstract tribute to Bathory’s landmark 1988 “Blood, Fire, Death” album. Further records include the preceding “Heaven Shall Burn” (blood), “Panzer Division Marduk” (fire) and the duo of “World Funeral” and “La Grande Danse Macabre” (death). In retrospect it makes the albums part of the movement a lot more interesting as up to this point in time Marduk changed a lot musically, but the way they structured their album has remained identical from yesteryear when they were a death metal band.

It is no surprise that there are more cinematic references to this album than you’d initially expect. That Håkansson loves cinema in its many forms is no secret, and “Nightwing” is littered with references in that regard. The spoken intro to ‘Slay The Nazarene’ is taken from the 1973 movie “The Wicker Man”. The main riffs of ‘Nightwing’ were adapted from the score of the 1991 vampire film "Subspecies". The lyrics are also based on the plot of the movie. The album’s main concept (and entire second half) is dedicated to further detailing the historical account of Romanian warlord Vlad Tepes. While the concept was initiated on the preceding “Heaven Shall Burn…” the subject appeared at its earliest on “Opus Nocturne” with the track ‘Deme Quaden Thyrane’ which was re-recorded here. This was probably done for completeness’ sake, but also out of convenience because this meant the band needed one less new song to write to complete the concept. That ‘Deme Quaden Thyrane’ fits the slower direction is rather opportune, as Marduk didn’t went all out high-speed black metal until “Opus Nocturne”.

The songs dealing with Vlad Tepes suffer from the same defect that made the “Heaven Shall Burn…” prologue a test in patience more than anything else. All these songs are directionless slow trudging cuts that work miracles in terms of pacing when they appear sparsely on each album. When taken back-to-back as the second half of an otherwise blisteringly fast genre effort they are poorly paced and constructed, supposedly epic songs to forward the Vlad Tepes narrative started two albums ago. Even in its death metal phase Håkansson never really excelled at writing slow material (‘Holy Inquistion’, ‘The Sun Turns Black As Night’ and ‘Within the Abyss’ excepted, if you are feeling charitable – or plainly adore that old dirgey death metal sound). Not only are these slow tracks horribly paced and constructed – they sit poorly with the preceding blisteringly fast tracks that serve to open the album. There’s no sense of journey with the narrative cuts, and Marduk’s musical frame is too limited (and limiting) to truly make something from these tracks. Since they had worked years to find their sound they weren’t going to revert back into their death metal form to make this work, which would have benefitted these tracks tremendously. Only ‘Anno Domini 1476’ sounds truly ominous and atmospheric in its eeriness, and this mostly due to the haunting choirs that appear sparingly and the militaristic percussion. Not only are these tracks listless and dull, they don’t sound very ominous either – which is the entire raison d’etre of black metal in the first place. Most of these tracks don’t build up to a climax, and what little there is of mentionworthy payoff isn’t worth sitting through most of them in the first place.

Marduk, to its credit, is consistent and reliable in what it does, and how it goes about accomplishing its very specific objective. In an almost Mortician sense, Håkansson relies on the tried-and-true formula established on “Opus Nocturne” and deviates not an inch from what worked in the past. Once again the album was recorded at Abyss Studio in Sweden with much in-demand producer Peter Tägtgren. Whereas “Heaven Shall Burn…” had a smooth sounding production that was richly textured in its digital gloss, “Nightwing” instead comes with a hostile concrete-and-steel sounding death metal production job. In fact this is the type of production that I’d wish Kataklysm’s “The Temple Of Knowledge” had. It’s certainly a headscratcher to see a black metal band do a death metal production better than an actual death metal band. The artwork by Belgian painter Kris Verwimp and Swedish artist Stefan Danielsson fits the early catalog. After this record Marduk would go into a different direction visually. “Nighwing” is a sturdy and reliable Marduk album – but its early death metal direction was plainly better.