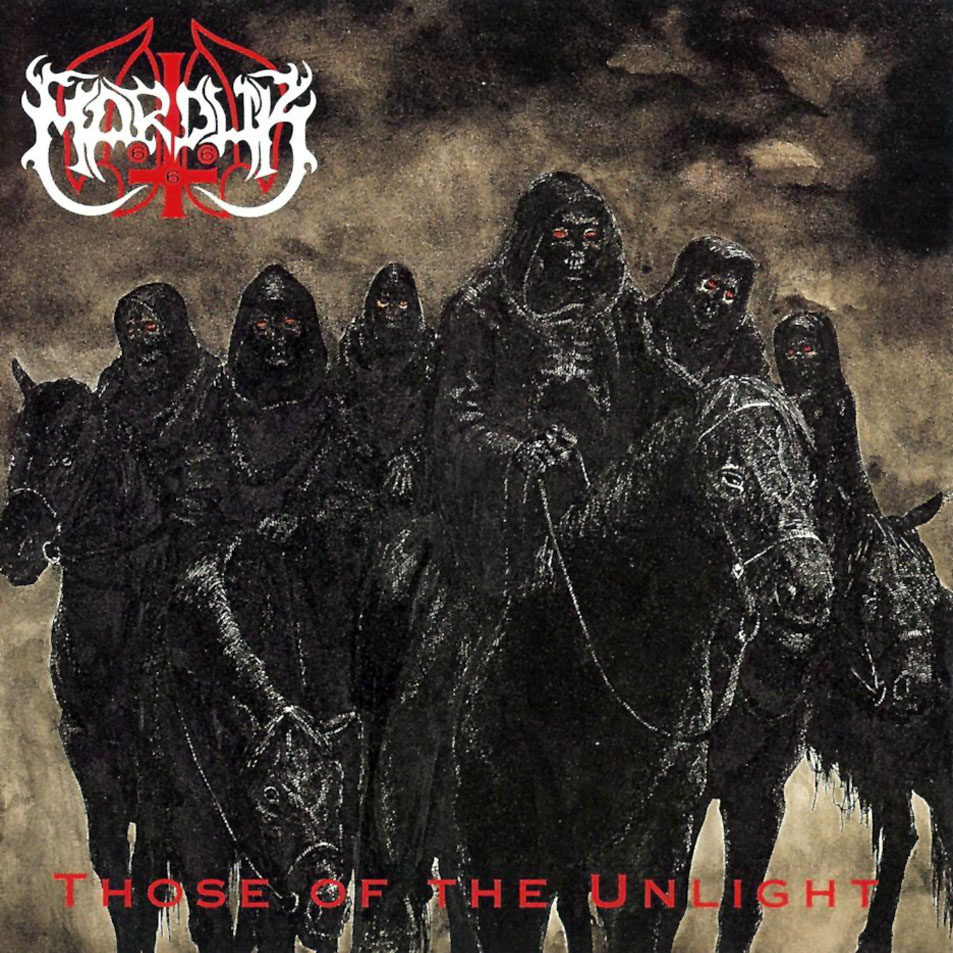 “Those Of the Unlight”, the second Marduk album, is still death metal for the most part but it already has a more pronounced early black metal riff style and the according chord progressions. While it is notably higher in tempo than the band’s “Dark Endless” debut, it is still thoroughly steeped in death metal stylistic choices. Like notable American institutions Autopsy and Deceased, Marduk’s drummer Joakim Göthberg also doubled as its vocalist. “Those Of the Unlight” was the second of three efforts to be recorded at Hellspawn Studio (a later incarnation of Gorysound Studio before it changed its name to the popularly known Unisound Studio) with prolific producer Dan Swäno.

That Marduk had upped the ante considerably compared to its debut is instantly noticeable. “Those Of the Unlight” is far more violent in every aspect. The increased level of speed is the most notable change. The band’s usage of eerie melody remains intact even though it is part of a mostly death metal framework. As with the debut there’s a prominent place for the thundering bass guitar, which is now handled by Roger Svensson (B. War). Replacing Andreas Axelsson as frontman is drummer Joakim Göthberg. Göthberg is far raspier and serpentine than Axelsson, but he wouldn’t find his true voice until the successor to this album “Opus Nocturne” arrived. “Those Of the Unlight” is equal parts death metal as it is black metal, although the latter influence starts to take prominence over the former. For some reason Marduk isn’t entirely ready to commit to the sound yet, and a lot of times it sounds like a particularly barbaric death metal record with light atmospheric embellishments in the form of organs and such.

The death metal formatting doesn’t in any way take away from the blossoming black metal sound they are cultivating on this record. The prominent place for the bass guitar and the kickdrums, the frequent solo’ing and the reliance on grooving midtempo sections are what give these songs their staying power. It’s hard to believe that guitarist Morgan Steinmeyer Håkansson decided to forgo doing solos/leads upon writing “Opus Nocturne” as it was one of the signatures that set Marduk apart from the competition. Even the atmospheric instrumental ‘Echoes From the Past’ fits wonderfully with the rest of the album. The band’s tranformation from a crude and somewhat primitive death metal band into a lean black metal outfit is commendable considering the few albums it took. “Those Of the Unlight” is key in that regard as it is the missing link between the band’s early death metal past and the direction they specialized in on “Opus Nocturne” and its successors. It is here that the seeds are sown for the Marduk formula. The same formula that would cement the band’s creative downward trajectory as it is too limiting to inspire creativity with the narrow perimeters it sets for itself.  The creative decay hasn’t set it in yet as “Those Of the Unlight” was pretty novel sounding for its day.

As far as artwork, imagery and lyrics was concerned Marduk honed what worked on the previous release. The ghoulish artwork by Dutch artist Misja Baas (who would draw the incredible artwork to Inquisitor’s sole album “Walpurgis – Sabbath Of Lust” just three years later) was his only for the band. The robed skeletal figures have a striking resemblance to the revenant Templar Knights from the 1970s “Blind Dead” franchise by Spanish cult director Amando de Ossorio. This was perhaps done intentionally as they convey the spirit of the album title, and Håkansson is a known movie buff. The band has resolutely adopted the nascent genre’s imagery with all members wearing corpse paint and brandishing medieval weaponry. Whereas “Dark Endless” sounded like a particularly minimalistic death metal album, “Those Of the Unlight” readily capitalizes on emergent black metal genre, and the record’s visuals changed accordingly. Marduk no longer hides which direction they wish to pursue, and this record is the first step in the band’s transformation from a death metal band into a black metal unit.

“Those Of the Unlight” was the second of three albums that Marduk recorded at Hellspawn Studio (a later incarnation of Gorysound Studio before it changed its name to the popularly known Unisound Studio) with producer Dan Swäno. Much like the debut this record is incredibly bass-heavy, and thick sounding. Like before the bass guitar is an intrinsic part of the band’s compositions, and while the drums don’t sound that different from before they are dynamically more varied than on the preceding record. Göthberg remains intelligible despite adopting a far raspier style than his predecessor. In essence “Those Of the Unlight” is a speedier and leaner Swedish death metal album with the black metal stylings slowly coming to the surface. The death metal formatting still prevails on this second, and it wouldn’t be until “Opus Nocturne”, the third Marduk album, that they fully embraced their new sound. Much of the riff set that would come to define the Legion-era is first heard here. The band still double in death metal chord progressions, and dashes of atmospheric keyboards – but the foundation is laid already.

The combination of death metal song formatting and black metal styling is what makes “Those Of the Unlight” the strong record that it is. Many of these cuts play as atmospheric, often speedy genre exercises with rasped vocals. The chord progressions, rhythm sections, solos/leads and bass-heaviness squarely define it as death metal, while the rasped vocals, the imagery and lyrics put it in the black metal camp. Like many bands of the day at this point there wasn’t a clearly defined breaking point between both genres, and Marduk embodies it better than any other. The atmospheric instrumental ‘Echoes From the Past’ is the last trace of any subtlety that one is bound to hear from Marduk from this point onward. It is very much styled like the instrumentals on Swedish death metal albums of the day. “Those Of the Unlight” offers the best of both worlds, and presents them in a crunchy package that remains as consistent to this day. In many ways Marduk’s first era is far stronger than the more popular Legion-era that it introduced. It is the alchemy between genres that make this record as strong and compelling as it is. The constant evolution of Marduk’s sound is what makes them the pillar they are today. Even on “Those Of the Unlight” Marduk wasn’t afraid to push the envelope, and to try things that weren’t done before. This album defines that mindset better than no other.