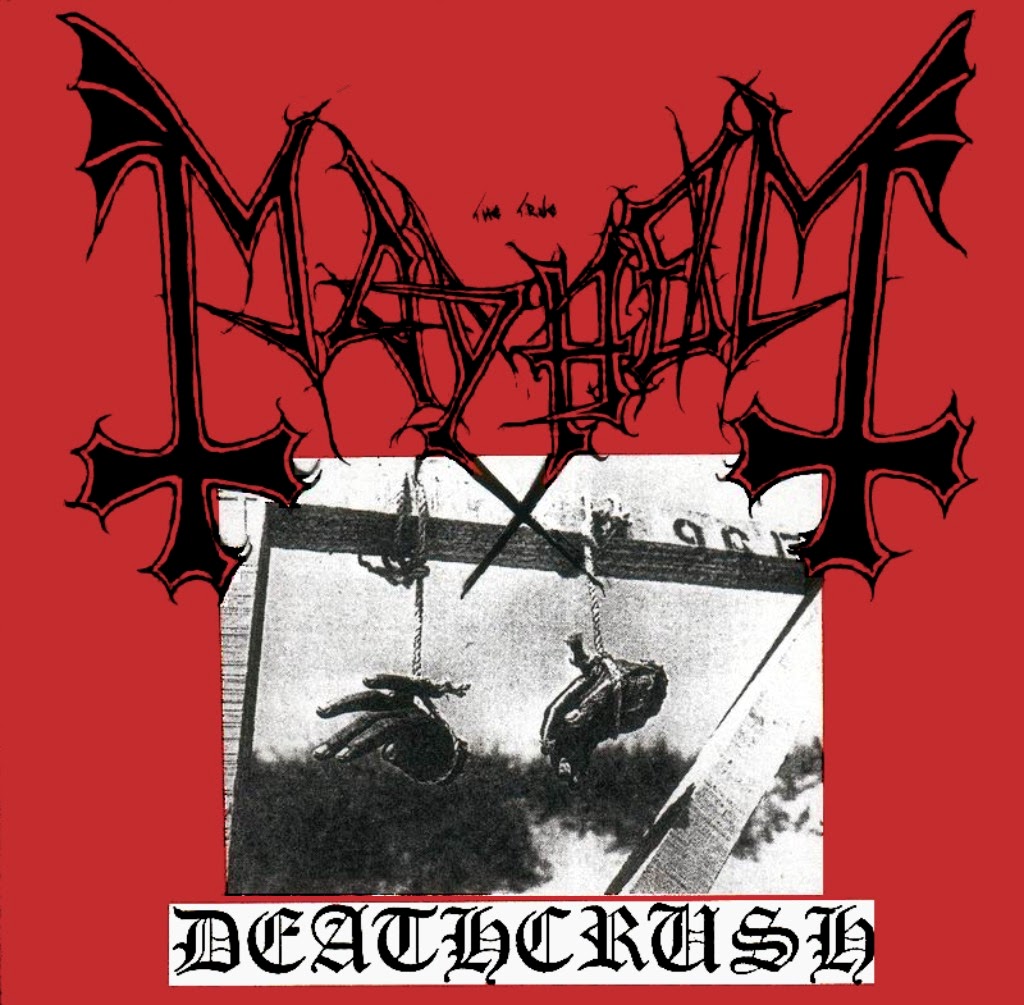 As historically (and retroactively) important as this EP is for the genre it helped define, its actual musical content and quality is open for debate. “Deathcrush”, the first real Mayhem release after a string of demos, is – despite its truly hostile and aggressive nature – a rather standard, and conformist exercise in early death/thrash metal. Taking cues from the formative acts as Death/Mantas, Necrophagia, Possessed and Sepultura. Its only defining factor is its lo-fi production values, and inhuman level of aggression. From a musical perspective it is hardly as revolutionary as its legend has it made out to be. Granted, it was more misanthropic and unhinged sounding than most – but it was also an EP trapped in a form of creative stasis, being the very thing it rebelled against. Essentially it is a primitive and heavily underproduced speed/thrash metal recording with screeching vocals that gets by on attitude more than actual skill or songwriting. 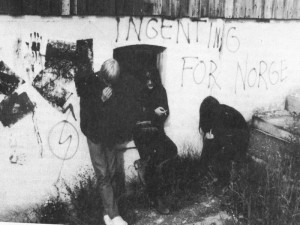 Formed in 1984 during the genre’s first wave Mayhem defined the second wave of the genre quite like no other. While hardly black metal by today’s standards, the crudeness, misanthropy and hatefulness that would come to define the genre as a whole drips from every pore of this recording. “Deathcrush” is as uncompromising musically as it is aesthetically. The band's name was taken from the Venom song ‘Mayhem with Mercy’ – and like that UK proto-death/black metal band it is more about sheer shock value than actual musical merit. “Deathcrush” is often named as the first Norwegian black metal release. Although Mayhem was the most visible progenitor of the second-wave black metal movement the genre’s defining characteristics had already been established by Swedish outfit Bathory, particularly on its “Under the Sign of the Black Mark” album. Marketed and promoted locally towards a close-knit group of like-minded individuals and friends/supporters of the band “Deathcrush” captures one of Norway’s most controversial (and influential) underground metal bands at its embryonal stage.

Since there were at least nine different bands named Mayhem worldwide putting out independent demos in the 80s the Norwegian unit defined themselves in another way. This led to this particular Mayhem to declare themselves "The True Mayhem", as they were the only band worthy of the moniker, and this is something they still use today for websites, publicity, and in their logo. The band mostly seemed to thrive on instability, as “Deathcrush” is as musically volatile as its membership. The core trio at this time consisted of rhythm/lead guitarist and main creative force Øystein Aarseth (Euronymous), bass guitarist Jørn Stubberud (Necrobutcher) and drummer Kjetil Haraldsson (Manheim) with a revolving vocalist cast. Each side of the EP features a different vocalist with Sven-Erik Kristiansen (Maniac), a self-confessed alcoholic and flagellant, providing vocals to the majority of the material, while Erik Nordheim (Messiah) would be lending his vocals to the Venom cover song ‘Witching Hour’ and ‘Pure Fucking Armageddon’ as Kristiansen spent time in a psychiatric ward after recording the “Deathcrush” EP.

The intro is a martial sounding electric drum composition by Conrad Schnitzler of German electronic music group Tangerine Dream. Contrary to popular belief, Schnitzler did not create the piece specifically for Mayhem: when Euronymous asked for an intro he just gave him a random piece of music he found in his archives, it became ‘Silvester Anfang’. The first thing you’ll undoubtly notice is how out-of-control, and sloppy the whole thing is. It’s leagues better than the initial “Pure Fucking Armageddon” they put out earlier, but it still isn’t very good beyond its immediate crudeness. It does harness the hateful spirit, youthful exuberance and intent that would come to define the genre during its second wave. These songs certainly are unrepentant, and misanthropic to a fault – but once the smoke clears there’s very little here that stays in the mind. All songs whiz by at a truly breakneck pace, and only the Venom cover song ‘Witching Hour’ offers some brief respite. On some editions, ‘(Weird) Manheim’ and ‘Pure Fucking Armageddon’ are combined into one track. The brevity hinders more than it helps. 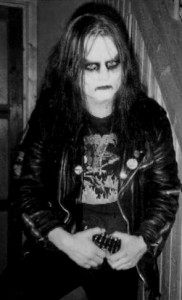 The lyrics on the juvenile side with colorful explorations of sordid death metal subjects as dismemberment, gore and necrophilia. The fact that they are riddled with needless expletives doesn’t help the band’s case either. Most lyrics were penned by bass guitarist Jørn Stubberud (Necrobutcher) and it is puzzling of how much they conform to the standards of the genre Mayhem intended to get away from in the first place. Mayhem would adopt darker lyrical themes upon the joining of Swedish vocalist Per Yngve Ohlin (Dead) after the defection of both Sven-Erik Kristiansen (Maniac) and Erik Nordheim (Messiah).  Although the EP is famous for its condemnation and rejection of the then-nascent death metal scene, famed Tampa, Florida genre producer/engineer Scott Burns and UK label imprint Earache Records in particular, it apparently has no problem with imitating the early US and European death metal sound. In retrospect this condemnation of the genre is a bit puzzling as it is fairly well-documented that Mayhem figurehead Øystein Aarseth was very interested in both death metal and grindcore.

The EP was recorded at Creative Studios in Kolbotn, Norway during February/March 1987. According to accounts by the band producer Erik Avnskog expected a raggae band to come in and record. This explains the shoddy and make-shift production, as Avnskog didn’t know how to handle the abrasive, chaotic and sloppy music that this band wrote. Mayhem uses instruments descriptions that would later be adopted by death metal bands in general during the late 90s and early 2000s. Frontman Kristiansen was dubbed “gutpuking”, bass guitarist Stubberud chosing “4-string crushfuck”, creative force Aarseth became “deathsaw” and session vocalist Nordheim describing himself as “Iron lungs”. Interestingly Kjetil Haraldsson dubbed his drums “hellhammers”, no doubt inspired by the Swiss band of the same name. His eventual successor Jan-Axel Blomberg would use Hellhammer as his own stage name probably in respect to both. While these superficialities are interesting, it doesn’t change the fact that “Deathcrush” is an incredibly sloppy, underproduced and underwritten first recording of a band that thrived more on its extracurricular activities than its musical undertakings. 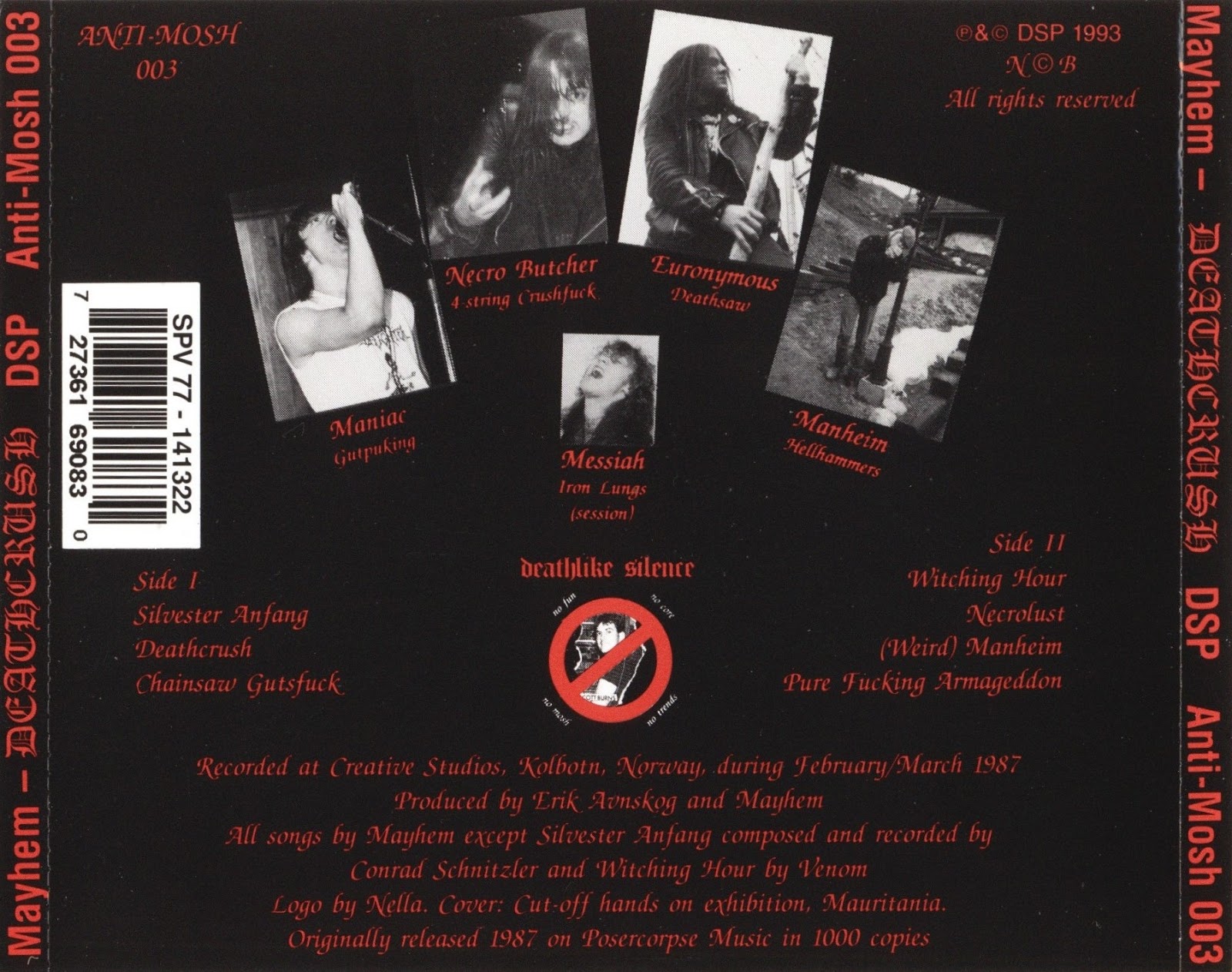 Released on Aarseth’s own label imprint Posercorpse Music - the label imprint that would later transform into Deathlike Silence Productions, which in turn would re-issue the EP on CD/LP in 1993 – in 1987 because the industry wasn’t yet ready to invest in a band as over-the-top and extreme as Mayhem. The Deathlike Silence version of this EP is notorious in its supposed condemnation of standards and practices of the nascent death metal scene with its “anti-Scott Burns” image appearing central. The band had not yet adopted the usage of corpse paint, as this would only happen when Per Yngve Ohlin (Dead) joined the band. Ohlin was involved in early Swedish death metal act Morbid, which also included Lars Göran Petrov and Ulf Cederlund (later of formative Stockholm death metal act Nihilist and after that the lamentable Entombed). Mayhem’s actual transformation, philosophically more than musically, happened in between recording sessions. The follow-up to this record didn’t so much cement the band’s musical merit as it forever etched its name into history due to its enduring legacy of non-musical infamy.

That isn’t to say that “Deathcrush” isn’t worthwhile, if not for its rabid intensity then certainly for its historic importance in the genre it helped define. In actuality "Deathcrush" is immensely primitive and chaotic that Sepultura’s “Morbid Visions” sounds accomplished and nuanced in comparison. The EP is sporting a grim photographic sleeve of two severed hands setting the standard of ghastly imagery that would come to define the black metal genre for many years to come. As historically important this EP might be, it doesn’t change the basic fact that it isn’t very good from any rational, or technical point of view. History has placed a substantial amount of importance on this sloppy little speed/thrash metal exercise than that it probably deserved, or warranted. Were it not for the infamous non-musical activities of the band that wrote it they probably would have been just another footnote of the genre, as they probably should have been in the first place.