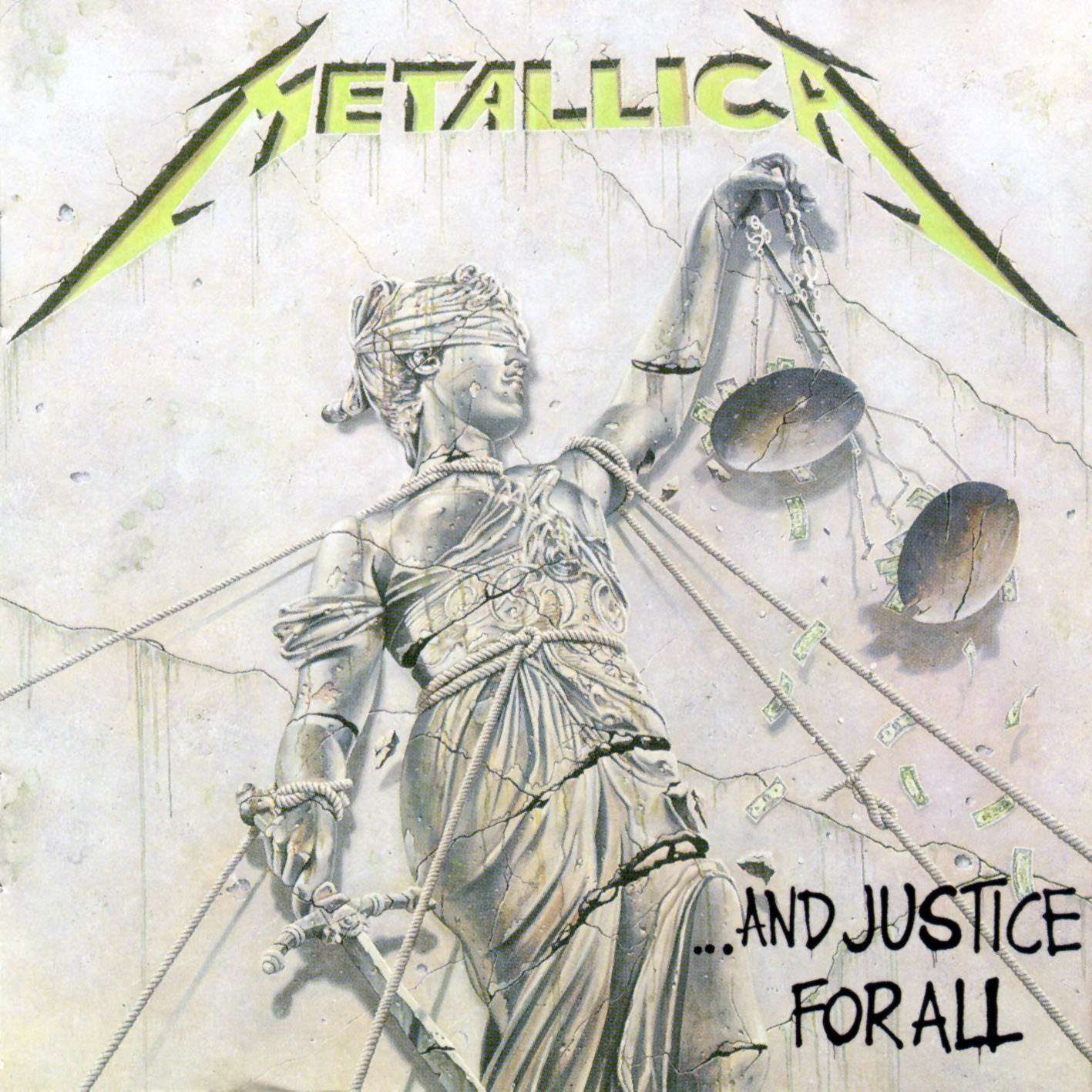 …And then Cliff Burton died. With the untimely passing of its bass guitarist San Francisco thrashers Metallica lost its most valuable member. Burton was the band’s most technically accomplished member, and its most musically gifted – with his passing the band went through a difficult transition period, and “…And Justice For All” sees the band with one foot in the future, and one foot in the past. The record has the band dazed and confused by the sudden passing of its beloved bassist, and unsure of what direction to move forward in. It is Metallica’s most technical and forward-thinking release, but also its most uncertain one. Probably inspired a good deal by underappreciated Austin, Texas technical metal pioneers Watchtower – it moves in two directions at once, and never commits to either. To date, it’s the only record of its kind in the Metallica catalog.

The first record to feature former Flotsam and Jetsam bass guitarist Jason Newsted is a mixed bag of truly powerful musicianship crippled by an overly dry production and confused, plodding songwriting. The old spirit of Metallica can still resoundedly be heard through out these tracks, but all of them seem longer than necessary. In an attempt to modernize its sound the band opted to imitate Austin, Texas technical metal pioneers Watchtower, which largely fails cos Metallica just hasn’t the chops needed to successfully pull off such a lofty transformation. “…And Justice For All” is the band’s most ambitious offering to date, and the only loosely conceptual album they’d tackle in their classic metal era. It is the last mandatory release in the band’s extensive backcatalogue. The album is complex by Metallica standards, but the metal scene at large had by this point outplayed the band in about every way imagineable. It is the dying breath of the world’s most revered San Franciscan thrash metal act. 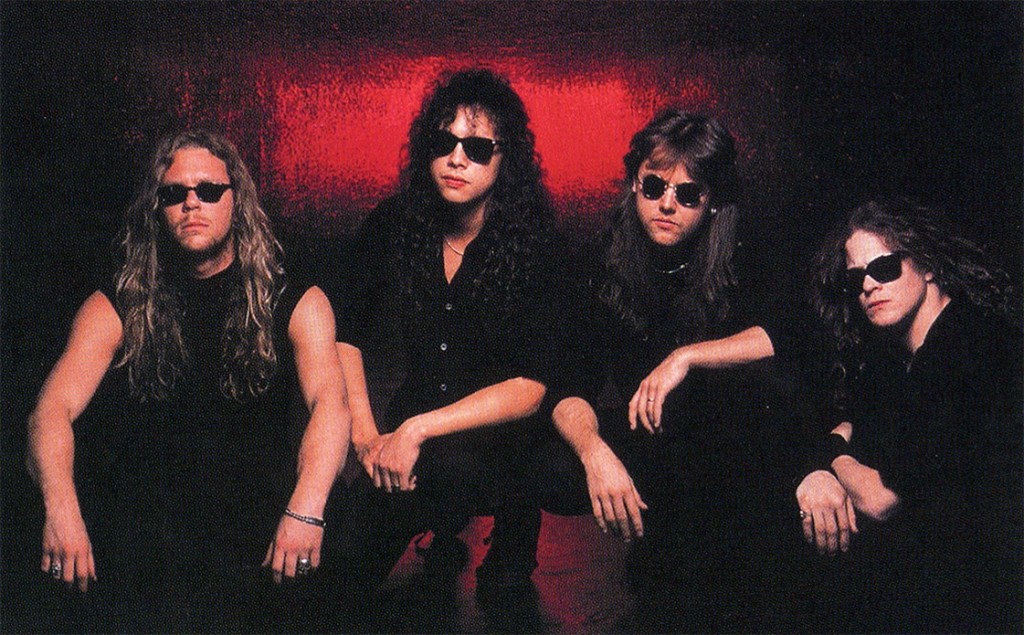 ‘Blackened’, the devastating opener, was co-written with Newsted and it forms the ideal introduction to this quite different sounding album. It is still fastpaced but the start-stop structure and overall slowness in between the fast segments betrays that these songs were written without the band’s primary guiding light, the late Cliff Burton.  Speed, once the most famous weapon in the band’s arsenal, is used sparingly. From the title track onward it is noted how much slower the band has become in the interim. The album is still very much thrashy and metallic, but the focus has shifted from breakneck speed and adrenaline-fueled excitement to technical exercises in musical form without a clear purpose or direction. The title track is a glaring example of this very thing. The thing just drags on and on, and it takes forever to get its fairly uneventful point across. As always Kirk Hammett’s leads and solos are what redeem the material, but on an album stifled by contrived songwriting and a toothless production – it is of little consolation.

What  “…And Justice For All” does do right is its concept, as it is Metallica’s single concept record. It concerns political and legal injustice as seen through the prism of war, censored speech, and nuclear brinkmanship. A good deal of the material present were supposedly unfinished compositions, riffs and song ideas left behind by late bass guitarist Cliff Burton. The band repurposed these ideas and added their own material to the groundwork Burton had left behind. This is why it often sounds as if the band is trying to move in two directions at once. The compositions are long-winding and technical in comparison to the band’s usual standards, but the unquenchable energy and speed that once was this band’s trademark is sorely absent here. While the compositions themselves are fairly complex for the band, the individual elements are anything but. In the absence of Burton the majority of the material was put together by the Hetfield-Ulrich axis, and they don’t possess nearly the musical theory and knowledge that their late bass guitarist did. This results in overly long, awkwardly paced and anticlimactic songs that should have been this band’s most violent material in any other scenario.

That however doesn’t change the fact that there’s only a few really impressive segments scattered across the album that is in itself somehat underwhelming. There’s some interesting and intense drum work by Ulrich to be heard, particularly in ‘One’, ‘The Frayed Ends Of Sanity’ and ‘Dyers Eve’. On the whole the vocals of James Hetfield are weak, and powerless, except on ‘Blackened’, ‘One’, ‘The Frayed Ends Of Sanity’ and ‘Dyers Eve’ where he delivers a spirited performance. This was also the last album to include a mostly instrumental with ‘To Live Is to Die’, which is set to a poem by the late Cliff Burton. All the songs were written by Hetfield-Ulrich, but the most technical or ambitious cuts have contributions from Hammett. The biggest strike against this record is that it is far too long most of the time, and that the songs tend to go nowhere of note despite all the build-up and the respectable amount of aggression, solos and riffs. The record feels pieced together from uncompleted song ideas, and this is never a good thing coming from the band that used to write songs so naturally and effortlessly. It is also sad that the band’s most conceptually and musically ambitious record is also its dullest. Imagine what these could have been had Cliff Burton not been killed on that icy road in Sweden. To what exciting and creative heights could he have pushed these men? The world will never know. It is merely one of the more glaring problems on an album that is riddled with many. Given the circumstances the band pulled off an admirable job.

“…And Justice For All” was recorded at One on One Recording Studios in North Hollywood, California. Initial sessions were completed with producer Mike Clink (famous for the Guns N’ Roses “Appetite For Destruction” album) at the helm – but this constellation lasted briefly. Principal sessions were cut with the band’s long-time Danish producer Flemming Rasmussen. While the bulk of the recording were handled by Rasmussen, Clink was able to retain production credits for engineering drum tracks on ‘The Shortest Straw’ and ‘Harvester Of Sorrow’. For a band that once sounded so vibrant, lively and crunchy, this album is a farcry from the band’s heyday. The dry production was due to Rasmussen’s absence during mixing stages. Newsted’s bass guitar was mixed so low as a hazing ritual on account of the rest of the band. Another reason of the absence of bass presence is due to Newsted’s insistence to double Hetfield’s rhythm. Jason Newsted made a commendable debut with his new employer, but the material present doesn’t allow him to flex his muscles and truly thrash out like he used to.

In more recent years a bootleg mix with Newsted’s bass tracks restored has surfaced under the name of “…And Justice For Jason”. The mix is far beefier and more metallic but is plagued by the same dryness and thin guitars that mar the original mix. It does conclusively prove that Newsted did indeed follow the rhythm guitars to a fault with occasional moments of creativity whenever the music permitted.  Newsted’s restored bass tracks however do not change the fundamental production problem of the record. Even with the throbbing bass tracks the guitar tone is still too dry, and the drum sound still borders on the synthetic. This type of drum sound has become very popular in more modern forms of death metal, but the blueprint can definitely be heard here. The great emphasis on technicality robs much of the material of its inborn power. Hetfield, vocally weak, handles the ambitious lyrical concept with finesse, and penned a number of socio-political lyrics about topical events of the day that remain relevant to this very day. The fantastic artwork by Stephen Gorman is complemented by illustrations by Pushead. The photography is ugly and uninspired. All members appear inebriated, absent and confused as to why they are there. Particularly Hetfield and Ulrich seem to be staring blankly into space in these pictures. All members were heavy drinkers at the time, so this can partly be blamed due to intoxication and the heavy intake of alcohol.

The album is most famous for featuring the band’s first music video and hit single ‘One’. The song outlines the plot of Dalton Trumbo's 1939 novel “Johnny Got His Gun”. The novel is a character study of a soldier, injured at war, that loses all of his limbs, and who suffers locked-in syndrome. In 1971 Dalton directed the movie adaptation to his novel, starring Donald Sutherland amongst others, of which the video takes its footage. Instead of signing a long-term licensing deal of the footage, the band just bought the right to the movie in its entirety. This explains why “Johnny Got His Gun” never saw an authentic DVD release to this day. The movie can be found on YouTube, and perhaps on the black market and bootleg circuit. It is a curiosity more than anything else, although it is a powerful piece of cinema in its own right. Capturing Metallica at a crossroads in its career it would be the last truly metallic album that is worthy of their name. After this record and its world tour the band would hire a new producer in Bob Rock, who encouraged them to adopt a much more simpler, and radio-friendly sound. After a long pre-production period, and a year of recording Metallica would return with the often maligned but persistently popular “Metallica” in 1991. “…And Justice For All” is the last real Metallica record, and the last worth seeking out for anybody interested in the early history of the world's most popular heavy rock band.  In 2003 the “…And Justice For All” album was certified 8 times platinum as it had sold in excess of eight million copies.