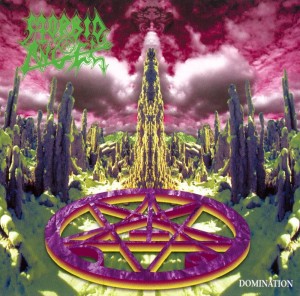 If one were to pinpoint the exact instance where Morbid Angel, the gold standard to which all things death metal was measured, started losing the plot musically 1995’s “Domination” would be the moment. After a recklessly violent debut, and two more deliberately paced successors the Tampa, Florida unit was tempted with mainstream popularity. The band’s ascent into the popular mainstream metal consciousness also heralded their end as undisputed innovators in the very genre they helped shape. “Domination” is probably the worst the first David Vincent era has to offer. It is a sad reminder that the promise of money and fame will corrupt even the strongest of minds. Once legendary and unattainable for their excellence and non-conformity, here Morbid Angel wants to hang with the despised dudebro/jock douchebag and mallrat crowds of populist groove/aggro metal outfits such as Machine Head, Pantera and Sepultura.

The biggest strike against “Domination” is how blatant it is about its aspirations. This isn’t a record for those who loved the prior three albums. No. From the riff that opens the semi-title track ‘Dominate’ it is rather obvious just how much the creative paradigm had shifted for the band. Where the band once wrote about Sumerian deities, the Roman Empire and general misanthropy aimed at the world at large, now the lyrics were more earthly and obvious in subject matter. “Domination” largely deals with socio-political matters: warfare, religious persecution, the futility of war and heresy. They are verbose as per usual and the poetic slant people came to expect from Vincent remained intact, but it is hardly worth the price of admission compared to the lauded preceding records. It is not quite the fall from grace that the band would experience in 2003 with the reviled (but retroactively functional and respectable) “Heretic”, but its insistence on hanging with the popular crowd is what makes “Domination” the insufferable mess that it is, and every lunkheaded decision can brought back to just that one error of judgment.

The first signs of the post-Vincent deterioration appear with this record. ‘Where the Slime Live’ is a slow-trudging groove track drenched in studio engineered vocal enhancements, the riffing is all about chugging instead of meaningful chord progressions. The album’s two instrumentals are thankfully brief, but mostly redundant. They are just meaningless and obligatory filler that don’t actually add anything to the album they appear on. The riffs themselves are largely forgettable, and it seems every time the band don’t know what to do they put the sort of groove riffs that made Sepultura’s “Chaos A.D.” the knuckledragging borefest that it was. It’s hard to believe that this is Morbid Angel. The leads/solos are the best thing about the record, Erik Rutan (formerly of New Jersey act Ripping Corpse) makes his recording debut with the band here, and his style fits seamlessly with Azagthoth’s. The overall tempo is much slower, and more than ever before are the songs based around hooks. This in itself isn’t much of a problem, but considering this was a record by the most important death metal in North America, if not the world, it is a puzzling choice even to this day. Had the band ran out of steam? Was this an easy stylistic diversion they could pass off as something of their own? Were they pushed in this new direction by the major label that had contracted them? The questions are many, and all relevant. Add to that Vincent’s far more intelligible vocal style, and what you have is a band suffering a considerable identity crisis, apparently with no idea how to appease its two masters. The only track that really resembles anything of the past is album closer ‘Hatework’, a slow crawling death/doom track that is heavy on keyboards. In many ways its similar to ‘Blessed Are the Sick’ (from the album of the same name) and “Covenant” live staple ‘God Of Emptiness’ in terms of atmosphere, overall darkness and unrepentant hatefulness that it holds. It’s the only song of its kind on this lamentable disc of toothless groove metal.

That isn’t to say that any of the songs are terrible per se. A lot of them are in fact good for what they set out to do - but this is Morbid Angel at its most accessible, groovy and, for the lack of a better word, populist. Everything that might turn off the undemanding crowds has been excised, and the songs themselves are simplified and streamlined in ways that only reek of the worst crowd pandering. That isn’t to say that music (and death metal in particular) needs to be technical, or complex to be appealing – but when the essence gets lost in a desperate bid for mainstream acceptance, something has gone terribly wrong. That is the main strike against “Domination” when it comes right down to it. It isn’t a bad album in itself, it just sees a once infallible band try its hand in appealing to a fairweather crowd that has no real interest in them, nor their genre. It could be argued that death metal needed to made more accessible in order to reach a wider demographic, but a band like Death (to name one example) has proven that one does not need to lower oneself to crowd pandering to reach a wider demographic. Cannibal Corpse is another example. They too never compromised their vision but reached a wider audience through relentless touring and consistent quality in whatever product they put on the marketplace. “Domination” reeks of complacency and laziness. 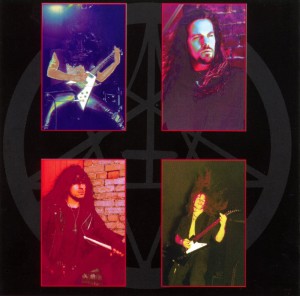 Granted, despite its myriad artistic shortcomings “Domination” meant progress on other fronts. The production from Morrisound Studios and producer William ‘Bill’ Kennedy with additional engineering from Mark Prator is probably the best the band had ever experienced up to that point. Especially drummer Pedro Sandoval never sounded better. The rhythm guitars sound concrete and crunchy whereas the leads/solos are sparkly and lively produced. In comparison to the albums that came before there’s a level of digital gloss and sterility present, but none of it distracts enough to be considered problematic. The bass guitar rumbles audibly beneath the guitars but it never does anything to warrant any interest. The artwork by Dan Muro was one of the more accomplished pieces that the band had used up to that point, even if its color palette differed radically from what had came before. Azagthoth’s thank list is interesting is that it contains an excerpt of prose that would later be reproduced in full in the song ‘Prayer Of Hatred’. It would see release three years down the line on the 1998 album “Formulas Fatal to the Flesh”, the debut for widely scorned frontman Steve Tucker. The record also eschews much of the overt Satanism, as would become the standard for the coming Tucker era, which would span the three subsequent and divisive albums.

“Domination” was the second of two Morbid Angel records to be released on the Giant Records imprint, a Warner Bros. Records subsidiary label which largely dealt with mainstream popular music, r&b and country music. After the label filed for bankruptcy the band returned to its original label Earache Records, which distributed the album in Europe. “Domination” was both officially issued on tape format in East-Europe through Metal Mind Productions, and bootlegged through Moon Records. Initial copies of “Domination” came in a green jewelcase. There were also plans made for a limited edition "Slime Pack", but this edition never came to fruition as several packs leaked before shipping and the slime-substance was found to be toxic. A particular run of limited editions came in a metal tin, but those were limited to 1000 copies.

In the wake of the record’s lukewarm reception, Vincent opted out and joined his wife’s industrial shock rock band Genitorturerers, and remained with them for a decade. It also was the tipping point where Morbid Angel’s sales figures started dropping drastically with each subsequent release. Aided by the controversial entry of Steve Tucker into the fold, the confused songwriting choices, and disparate production that each of these albums presented (along with the advent of file-sharing technology during the latter days of the Tucker era) – it is the definite career lowpoint of what was arguably North America’s most visionary death metal band. In the simplest of terms, “Domination” doesn’t quite dominate.