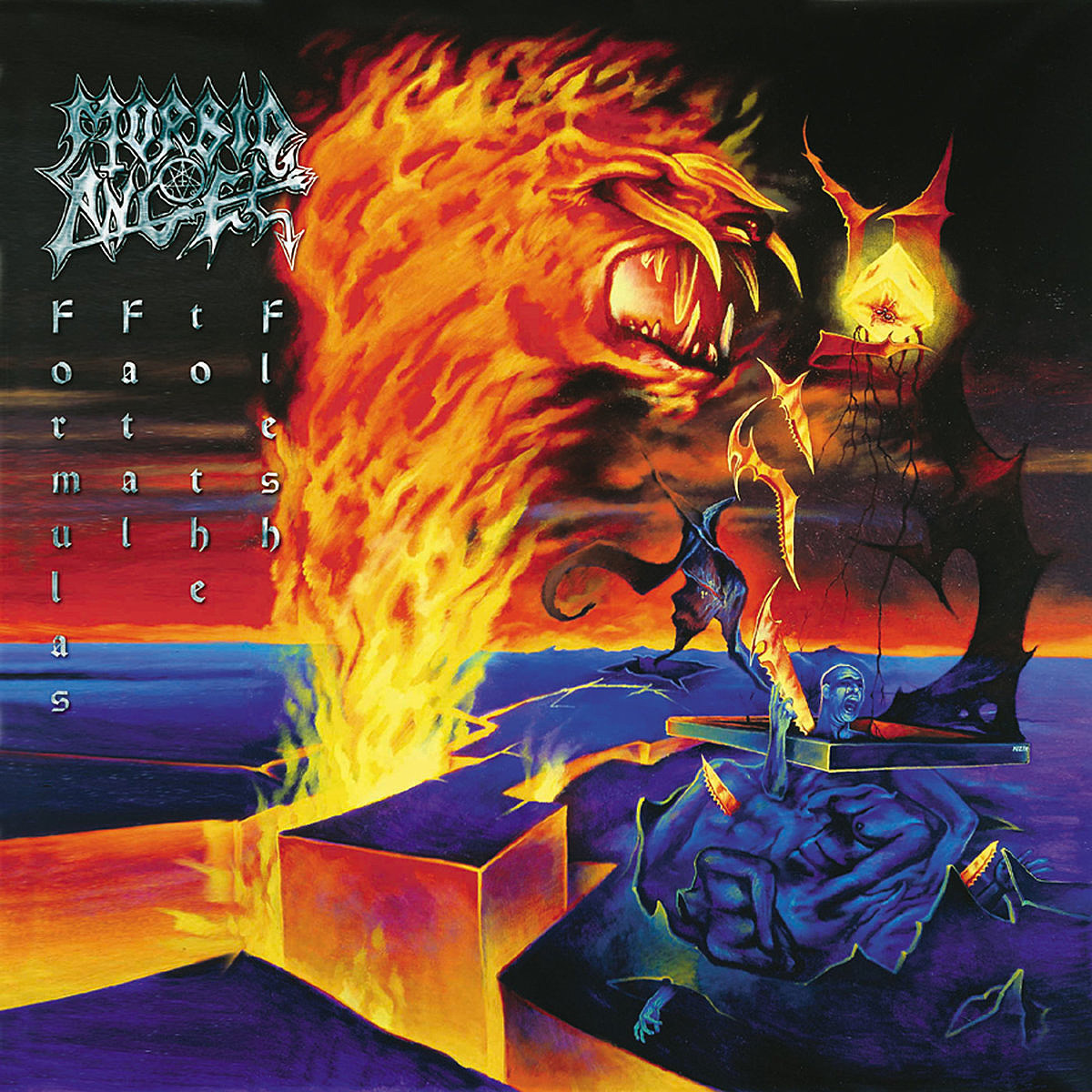 After the classic trilogy that ended with “Covenant” Tampa, Florida death metal formation Morbid Angel released the highly divisive “Domination”. Despite adopting a similar format to “Blessed Are the Sick” overall, it was an audience-friendly reinterpretation of its classic sound, but simplified and streamlined for wider appeal. After losing the services of its most identifiable frontman David Vincent (who also provided bass guitar) and those of their second contributing guitarist Erik Rutan - the band found itself in a quandary as the remaining duo put the band back together. Honorably, they persevered in the face of hardship, and with the hiring of Steve Tucker the band birthed “Formulas Fatal to the Flesh”, a conscious callback to their “Altars Of Madness” debut in terms of speed, ferocity and energy, fueled by a lyrical concept about the Sumerian pantheon and its various deities - The Ancient Ones, most prominently among them – and the desire to match itself with its fresh-faced and eager competitors.

There are a lot of things that can be said about “Formulas…”, but the most obvious is how the band is struggling creatively. Presented with the choice to either continue doing their own thing, or adapting its sound to a scene that had long since outplayed them Morbid Angel, or rather Trey Azagthoth, chooses to imitate the sound of their biggest competitor in the field, Krisiun from Brazil. That is not to say that Morbid Angel fully abandons what made them famous in better years, no. “Formulas…” is that strange album where the artist is unsure which path to follow. Its basic construction largely follows “Domination” in its slower and sludgy sections, while the midpaced segments try to recapture the “Blessed Are the Sick” alchemy – all this is then overlaid with a more downtuned, angrier and faster riff set to prove its relevance to a younger crowd that came to know the band through Krisiun. While it is amongst the stronger entries of the Tucker-era, it is here that Morbid Angel start the recycling of past material and the unhealthy habit of senseless padding through instrumental segues and pointless filler arose in earnest. That would come to characterize the dying years of the Tucker era, with the absolutely atrocious and indefensible “Heretic” as its questionable high point, or low point, rather. 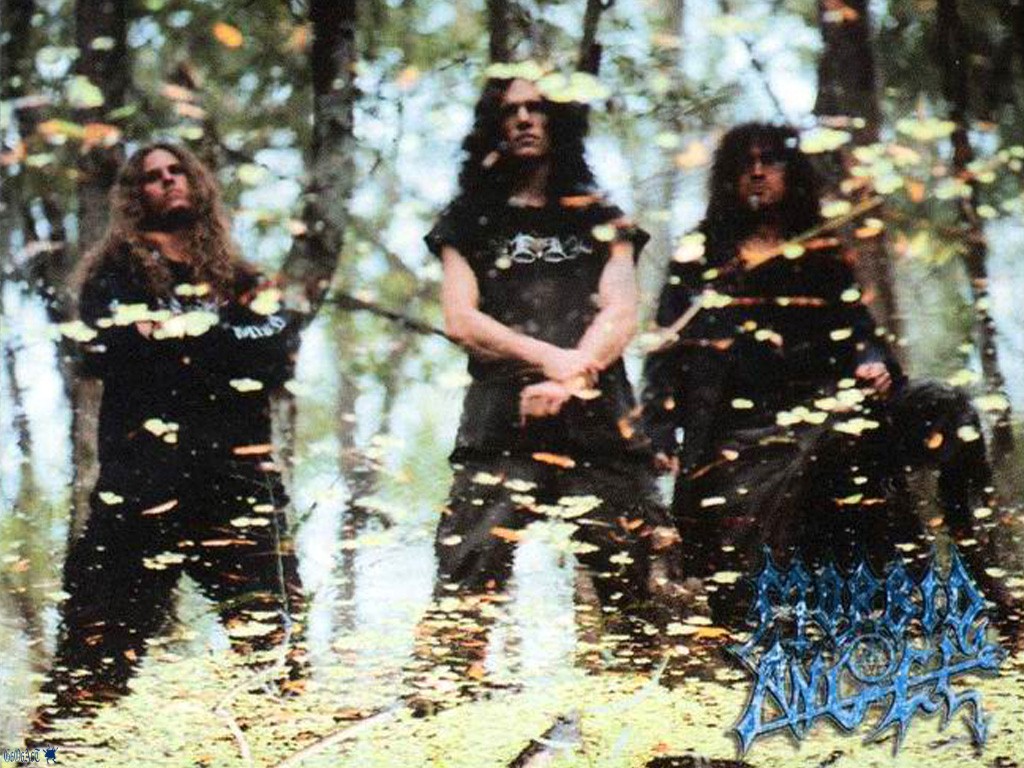 Steve Tucker. the Cinncinnati, Ohio transplant that was chosen to replace the then-respectable David Vincent had the unfortunate task of replacing one of early US death metal’s most iconic frontmen. Next to George Fisher replacing the once-relevant Chris Barnes in Cannibal Corpse, there was no other possibility of his presence behind the microphone rubbing long-time fans the wrong way, or being passed off as a weak imitator to those who didn’t keep as close tabs on the band, but still cared enough. Given the circumstances Tucker makes the best of the material what he is given. While his low-end rumbling on the bass guitar is, admittedly, rather docile and unremarkably trite his grunt is among the better ones in the genre, recalling Monstrosity frontman Jason Avery. He doesn’t stray too far from the tones of Vincent, and given the intricacy of some of the lyrics, he does a remarkable job with what he was given. He would find his voice with the next album, but as a debut recording as high-profile and scrutinized as this, Tucker makes a worthwhile entry. That he is hated for the reasons that allowed his entry into the band is not something he has any real influence over. It is remarkable that he lasted three albums with this band, given the continual stream of anger, disappointment and hateful venom that the ardent and more vocal minorities of the fanbase continued to pile on him. Tucker is the least of this album’s problems. Problems are what characterized this album, which seemed to be in two minds about itself, creatively and musically.

“Formulas…” was the heaviest thing Morbid Angel had written up to that point. As it was a compromise between three individual, often conflicting, sounds – it is surprising that Azagthoth was able to juggle this delicate balancing act with as much elegance and grace as he did. That is to say, for most of the original material this rings true – but the corpse had already started shambling on its own at this point. For whatever reason the band wasn’t able to gather enough original material for these sessions, and thus went on to pillage its individual and collective vaults for more material, resulting in this album’s shady second half. “Formulas…” opens with an absolutely scorching set of seven original and newly written songs. All the material was written exclusively by de facto band-leader Trey Azagthoth. Once past the atmospheric instrumental ‘Disturbance In the Great Slumber’ the band reverts into inconsequential rehashing of previously archived material and instrumental segues that feel detached from the rest of the album, and whose sole purpose seems to be to pad out the album to the required length.

Consider the following. ‘Hellspawn: the Rebirth’ was a re-recorded cut of ‘Hellspawn’ from the “Abomination Of Desolation” session, which the band considered unfinished and unsatisfactory at the time of its original completion. ‘Invocation To the Continual One’ is comprised of music written originally in 1984, but arranged and recorded here for the first time for public consumption. The instrumental tracks and the interludes are charming for what they attempt to convey. ‘Disturbance In the Great Slumber’ excepted there is no real reason for any or all these tracks to be even featured here, and their sad inclusion only appears to properly distribute songwriting credits between core duo Azagthoth and drummer Pete Sandoval. ‘Himnos Rituales de Guerra’ and ‘Ascent Through the Spheres’ were composed by drummer Pete Sandoval. If the band was struggling to come up with original material, why then the lunk-headed decision to let Azagthoth run the show creatively? Sandoval more than earned his place in the unit.

While that’s all perfectly reasonable, and excusable with any other band – it is not with Morbid Angel, the supposed quality benchmark to which all other bands are measured. A paltry seven (7) new original tracks after a three-year interval is on the thin side no matter how you spin it. Especially considering that this is supposedly the most gifted and brightest death metal act in all Tampa, Florida, if not the world at large. Once again, all these seven songs are exceptional for what they attempt to do, and given the problematic situation surrounding the creation of this album, they sound remarkably coherent. Instead of giving the listener nearly 20 minutes of recycled archive material and instrumental segues, this space could have been put to better use with three or four actual new songs. Would it have hurt to release the album a year later with all new songs and no rehashes or pointless instrumental segues that only stroke the ego its creator?

The lyrics are overlong and sometimes tongue-twisting incantations to primeval entities and other supernatural beings. While I love the concept itself, some context, history and explanations through liner notes would have helped tremendously. The booklet refers to the Most High Triumvirate Of the Living Continuum and the Most Ancient Of Days, but without context (or a decent search engine, and bit of time) most people won’t be able to make heads or tails from this, admittedly, promising concept. Behemoth and Nile were both doing similar high-concept undertakings, yet both were able to succinctly explain the meaning of each of their songs on the albums in question, but the brightest, most talented and most critically acclaimed band in the genre cannot? Who are they kidding?

“Formulas…” is the first Morbid Angel album that marked the band’s creative shift and the first to struggle with its own concept. Whether it was the absence of creative input from certain secondary members, or key members being swallowed by their own insurmountable egos remains yet to be seen. “Formulas…” does what it does rather well, and outside of the recycling of old material and the myriad instrumental segues that litter the considerably weaker second half of this album, it stands as one of the better records within Morbid Angel’s second era. From this point onwards the band would first redeem itself with the follow-up to this record, before finally giving way to all-encompassing creative inertia and masturbatory exercises of the worst sort. We might be far from “Blessed…” and “Covenant” – but the worst is yet to come.