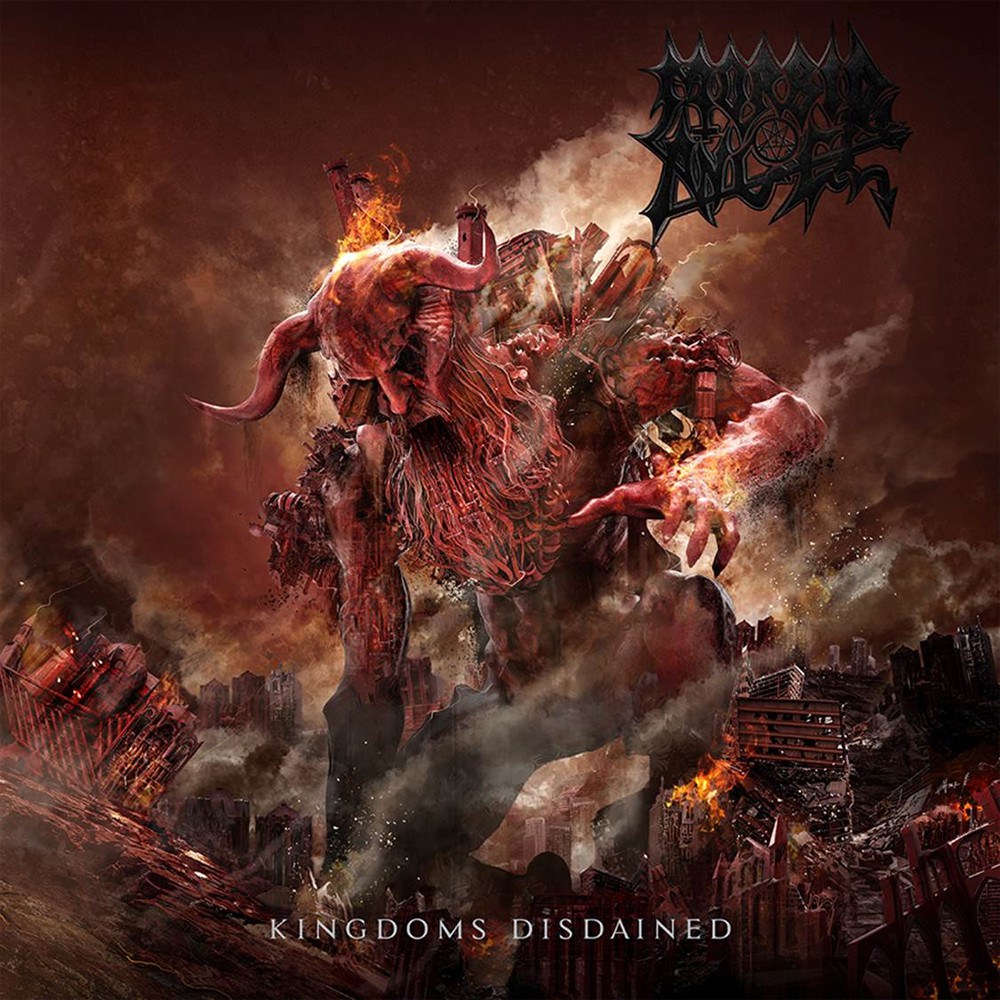 At one point Morbid Angel were untouchable innovators of their craft, gods among mortals, and the golden standard to which all things death metal, American and otherwise, were measured. The new millennium hasn’t been very kind to the once-infallible Floridians and they haven’t exactly been productive either. Their sporadic output has been spotty at best and completely indefensible at worst. Still every time Morbid Angel releases a new album the world waits with bated breath. Now three decades into their existence the question lingers whether Morbid Angel still is relevant to the genre they helped define – or whether they have become a relic of a bygone era, a legacy act running on empty. Second, and not any less important, is “Kingdoms Disdained” the much pined after return-to-form after the unmitigated disaster that was “Illud Divinum Insanus” – or is it something else entirely?

“Kingdoms Disdained” heralds the return of there-and-back-again frontman Steve Tucker and two new recruits. Dan Vadim replaces illustrious lead guitarists Richard Brunelle, Erik Rutan, and Thor Anders Myhren and substituting for Pedro ‘Pete’ Sandoval (whose newfound faith as a born-again Christian apparently makes him incompatible with the Morbid Angel business venture) is Scott Fuller, formerly of Relapse Records artists Abysmal Dawn, among others. “Kingdoms Disdained” is the first recording on German imprint Silver Lining Music (the recently rebranded UDR Music), the label by Ulrike Rudolph, formerly of distributor Steamhammer (SPV GmbH), and the first not to feature a canvas by long-serving painters Dan Seagrave or Nizin R. Lopez. It’s also the strongest and most combative that Morbid Angel has sounded in a long time - or at least since 1998, which is truly the best we can expect of these swamp dwellers this deep into their notoriously bumpy career. 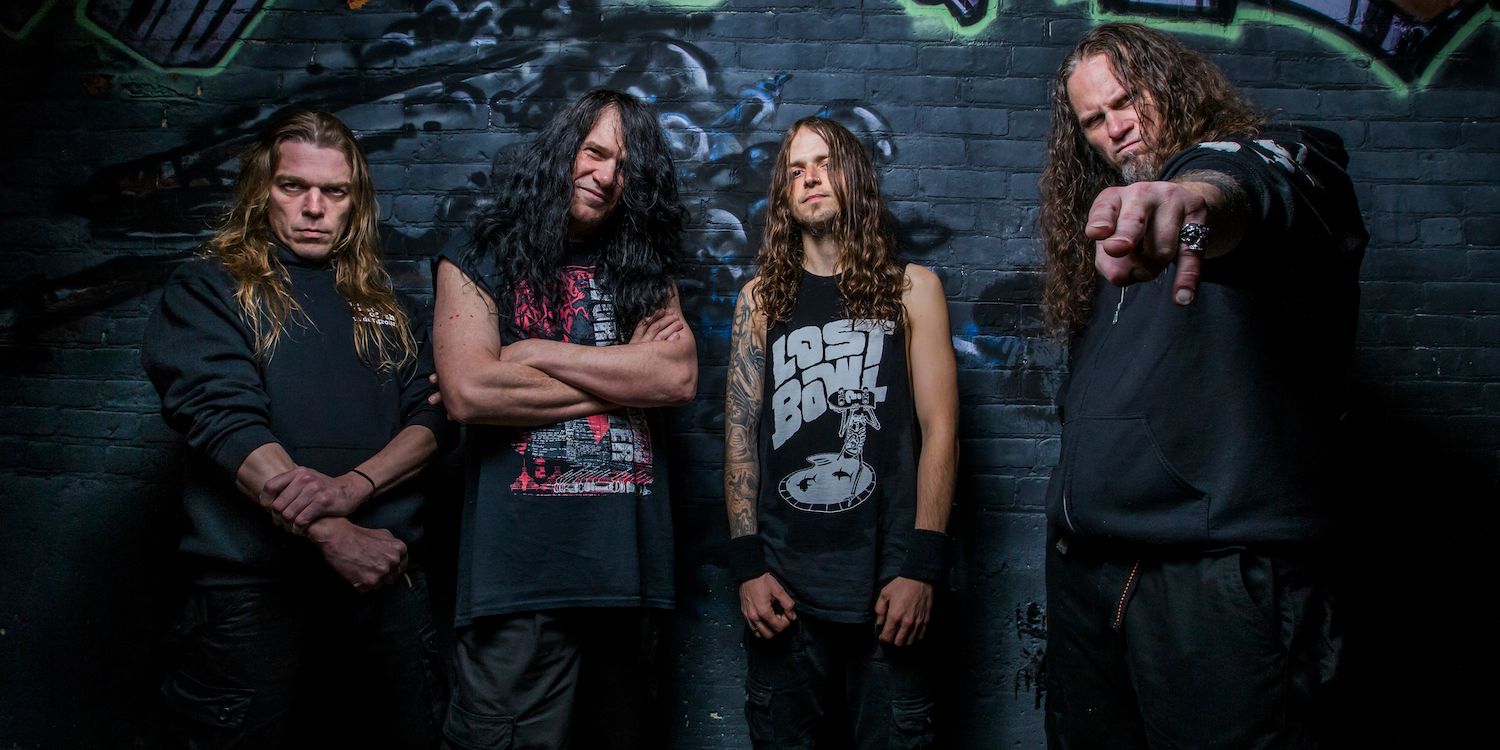 Either way you slice it “Kingdoms Disdained” is obviously intended as a return-to-form. Indeed, the crux of “Kingdoms Disdained” is efficiency and brevity. In age-old tradition the entire thing is robustly composed and excruciatingly oppressive sounding, but this time around it is also cohesive and unbelievably streamlined like this band's records seldom tend to be. “Kingdoms Disdained” boasts a level of barbarity last heard on “Formulas Fatal to the Flesh” and combines it with the doom-laden aura of “Gateways to Annihilation”. When did Morbid Angel last sound anything like this? Oh yeah, all the way back on “Covenant” and the groove slogfest that was “Domination”. It sports none of Azagthoth’s ambient soundscapes and even his twisted, chaotic Van Halen soloing has been reined in. The record never loses itself in masturbatory excess, a problem endemic of 2003’s uneven “Heretic”.

In 2011 “Illud Divinum Insanus” – the band’s shockingly, appallingly terrible foray into dated 90s industrial/dance and stadium rock all but killed the brand and “Kingdoms Disdained” is an act of restoration more than anything else. “Kingdoms Disdained” is remarkably consistent and focused. It’s an effort of conservation and restraint. Moreso perhaps than we’d to like give Azagthoth credit for. Had it followed “Heretic” the blemish would’ve been neglegible. Does it come close to matching any of the band’s classic Earache era records? No. Far from it. At times it’s nigh on impossible to distinguish “Kingdoms Disdained” from Warfather’s ominous lurcher “The Grey Eminence” that was released just months before.

So how do the new members fare? Dan Vadim is given his moment to shine on ‘Declaring New Law (Secret Hell)’ and drummer Scott Fuller has adopted all of Pedro Sandoval’s signature moves and given them 21st century make-over. It also helps tremendously that this record has the best drum tones since “Blessed Are the Sick”, “Covenant” and “Domination”. Production hasn’t always been on Morbid Angel’s side in the new millennium and it was a wise decision on the band’s part to record at Mana Studios in St. Petersburg, Florida, the facility of former associate Erik Rutan. The digital artwork by Ken Coleman is uncharacteristically Morbid Angel as this is band usually associated with macabre canvasses from Dan Seagrave and Nizin R. Lopez. Much like Malevolent Creation the Floridians have adopted a war-based thematic and the lyrics reflect it with ditties as ‘The Righteous Voice’, ‘D.E.A.D. (Department of Eradication And Disposal)’, ‘For No Master’ and ‘From the Hand Of Kings’. The Ancient Ones and the Most High Triumvirate of the Living Continuum are nowhere to be found on here. What it does cement is that Morbid Angel, it seems, has finally awoken from slumber and now is more hungry and combative than ever before. That just leaves us with the uncomfortable realization that death metal as a genre has since passed Morbid Angel by. One of the genre’s most defining bands has become nothing but a relic of bygone times.

“Kingdoms Disdained” is a solid, serviceable record that does exactly what it promises. However people have rightfully come to expect more of a Morbid Angel record than just that, especially in light of the classic three records with David Vincent. Age has started to catch up with Trey Azagthoth and the band that once led the genre through some of its greatest victories is now outplayed by an entire generation of younger bands. In their defense at least Morbid Angel is clearly trying their darndest to stay with the times. Fuller and Tucker are in no small part responsible for the sheer lethality of the majority of these cuts. Yet despite its brevity and streamlined efficiency “Kingdoms Disdained” misses some of that signature slithering Morbid Angel aura. There’s a distinct lack of esoterica on “Kingdoms Disdained”. For better or worse, it’s the most grounded Morbid Angel record since “Domination”. The fact that it’s so chained in reality is perhaps one of its greatest undoings. Despite all that it’s a solid return for a band that had been a lost cause for about a decade and a half. “Kingdoms Disdained” might not be the pined after rejuvenation of Morbid Angel, but a stark reminder that Azagthoth and his comrades can still deliver the goods when they set their minds to it. Now if only they’d channel that newfound focus towards a more consistent productivity.