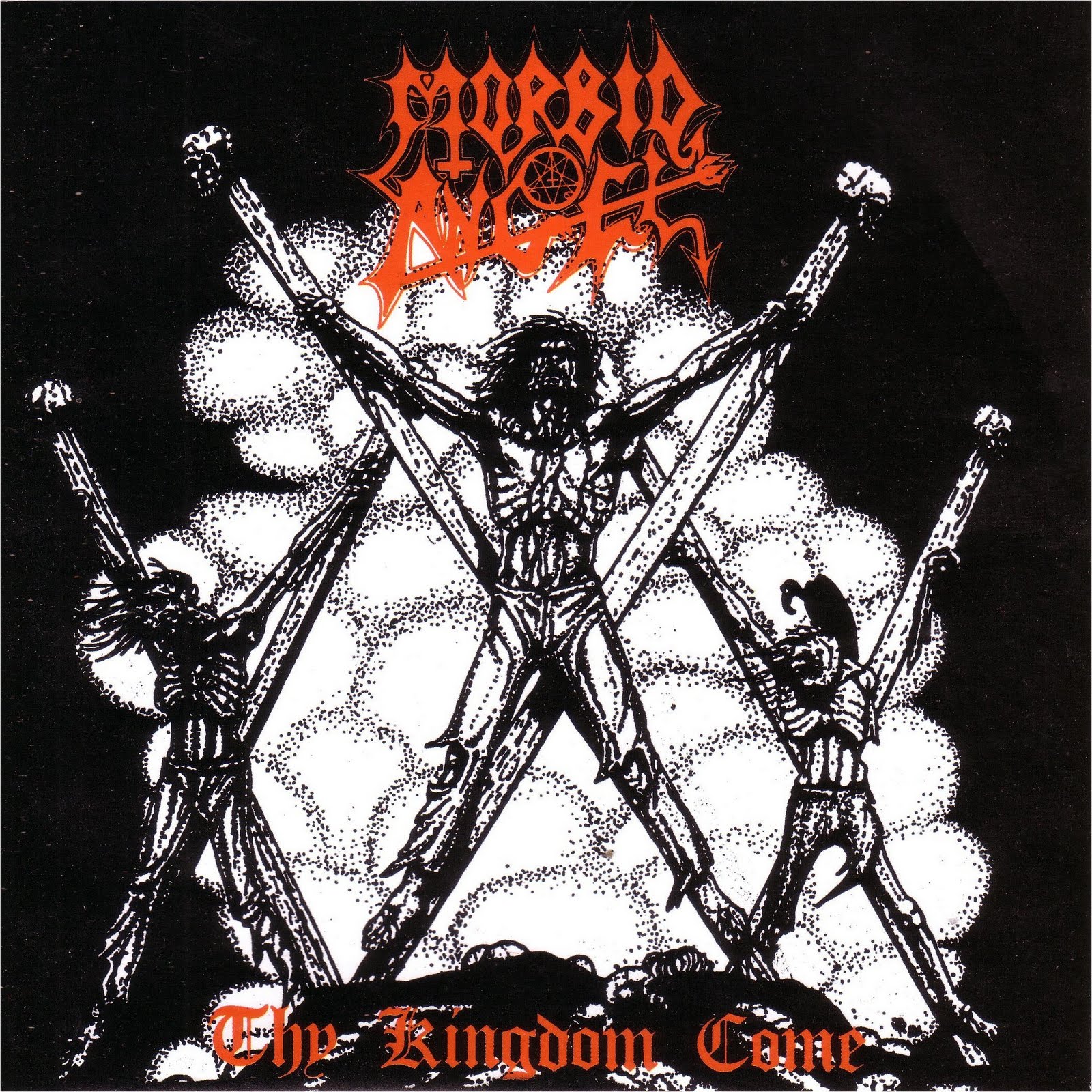 In between the disintegration of the “Abominations Of Desolation” line-up - which saw the ousting of drummer/vocalist Mike Browning and bass guitarist John Ortega - and its Earache debut, the band recorded a demo, and a single called “Thy Kingdom Come” to keep the name alive. For this session Wayne Hartsell sat behind the drumkit and Charlotte, North Carolina native David Alexander Stuppnig (David Vincent) assumed the role of frontman and bass guitarist. Morbid Angel was based out of genre hotbed Florida and North Carolina, this due to their association with Stuppnig who had financed and co-produced the ill-fated “Abominations Of Desolation” sessions the year before. Only lead guitarist duo George Emmanuel III (Trey Azagthoth) and Richard Brunelle remain of the previous incarnation of the band. “Thy Kingdom Come” is a brief time capsule to a transitional period in the band’s early years. The single version of this (which excludes the track ‘Blasphemy Of the Holy Ghost’ and a few live cuts) demo tape was re-released in 1988 on Swiss label Splattermaniac Records. This vinyl was issued a mere year before the band’s relocation to Tampa, Florida and the formation of its most recognizable and enduring line-up. 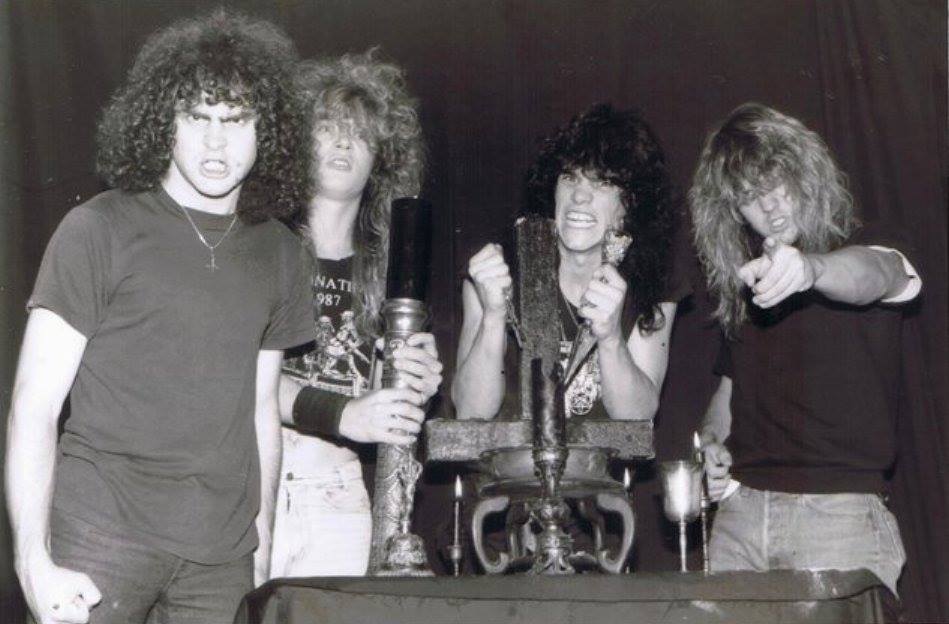 At this point Morbid Angel was still more a thrash – than a genuine death metal band. The sound is virtually identical to that of the “Abominations Of Desolation” session, and newly acquired frontman David Vincent hadn’t yet found his true voice. The new rhythm section makes a serviceable debut as Hartsell and Vincent both deliver a passionate performance in their respective slots. Azagthoth and Brunelle are in fine form as much of the guitar riffing that would come to characterize “Altars Of Madness” is present here. Wayne Hartsell’s debut behind the drums is a great one, as he is much more intense and diverse than Browning. His style is reminiscent of a more technically refined Bill Andrews (Massacre) and Chris Reifert (Autopsy). Vincent’s voice is more serpentine and raspier compared to the “Beneath the Remains” alike snarl he would adopt for “Altars Of Madness”. Both tracks of this vinyl would be re-recorded for the 1991 “Blessed Are the Sick” sessions. The only real difference is Vincent’s hissing vocal style, and the increased speed with which both cuts are played. This evolution would be completed on “Altars Of Madness”, the band’s label debut on British imprint Earache Records. For a stopgap release this EP is pretty solid, even though it is over before you very well realize it. 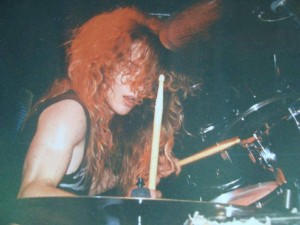 Given that this was the early era of the band before they made the choice to locate itself at Azagthoth’s home turf in Tampa, Florida - one assumes that this was recorded at Central Recording Studios in Charlotte, North Carolina. Information is sketchy at best, but it seems like the most logical choice given the band’s then-current whereabouts. The thick production is gritty and earthy, and very redolent of Death’s seminal “Scream Bloody Gore”. The handdrawn artwork by John Rainey is stunning in its simplicity. Both releases came out in 1987, although this vinyl edition would arrive in 1988. With half the band located in North Carolina, and the other in Florida a decision was to be made as to where base operations. The consensus was Florida (as this was where Azagthoth was based), which resulted in freshly drafted drummer Wayne Hartsell being cut loose from the band as either he was getting married and/or didn’t want to relocate. In that sense it is interesting that “Thy Kingdom Come” is the only release to feature Wayne Hartsell, who possessed a similar drumming style as his more recognized successor Pedro Sandoval. The difference with previous skinsman Mike Browning is night and day. It makes you wonder what Morbid Angel would have sounded like had they remained in North Carolina.

“Thy Kingdom Come” is generally an often-neglected footnote in the band’s long history, but one that was pivotal in what it set up for the future. The seeds for “Altars Of Madness” are planted here, although they would change drummers one more time before settling into its classic line-up. The vinyl was the only release by Swiss imprint Splattemaniac Records, the label operated by Erich Keller of the band Fear Of God, who ran the fanzine of the same name. On the basis of its preceding demo recordings and the “Thy Kingdom Come” single/EP the band was contracted by British label imprint Earache Records. The relationship with Earache would be a long-standing one, until the underperformance of 2003’s “Heretic” forced the band off the label. Although Morbid Angel would grow in status with every record they put out, the band isn’t nearly as flawless as their reputation would suggest. Every album post-“Altars Of Madness” signals stagnation and regression in varying degrees – even though the visuals and production values drastically increased. This vinyl is incredibly limited, and the band ended up owning most of them. As an “in-between” release this single/EP is interesting for what it is, but hardly mandatory unless you are a completist. It is the evolutional gap between “Abomations Of Desolation” and “Altars Of Madness” – but the curiosity of a different drummer is hardly worth the expense of tracking a physical copy of this down.