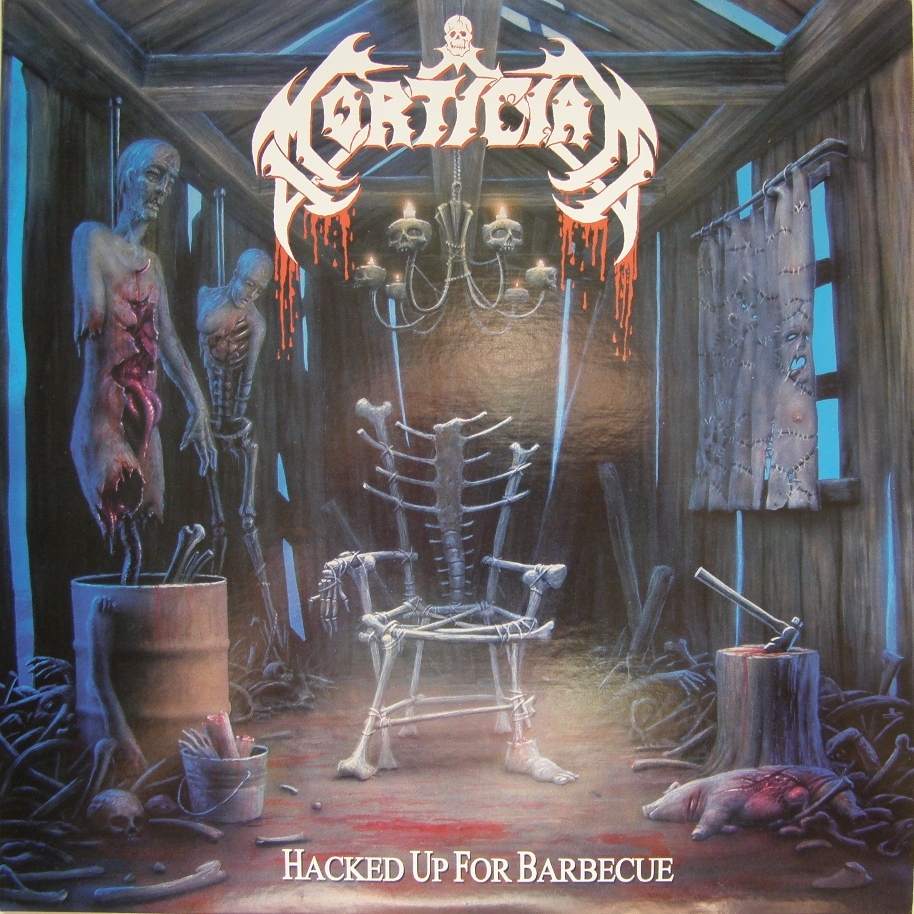 The continued (or rather continuing) existence of a band like Mortician is a question for the ages. Where the death metal genre, and its key bands, have constantly evolved and taken risks, Mortician remain in a stubborn creative stasis and is apparently happy to revel in stagnation. Where others grew, this band reverted into an even more archaic and bare bones state. Not that Mortician’s appeal is hard to miss, or difficult to comprehend - it’s just with the limited leisure time we have and the staggering amount of better musical options available to us at any one time, you have to wonder why one would willingly subject themselves to the auditory horror that is Mortician.

“Hacked Up For Barbecue” was Mortician’s first full-length album after a number of demo sessions, and the “Mortal Massacre” EP with drummer Matt Sicher. After the untimely passing of Sicher, the remaining duo opted to implement a drum computer and the first result of that experiment was this record. Heavily inspired by 1974 horror classic “The Texas Chain Saw Massacre” – gee, with such a title you wouldn’t say! – the undynamic duo of Will Rahmer (vocals, bass guitar) and Roger J. Beaujard (guitars, drum programming) fires off 24 tracks of downtuned, blazingly fast primitive death metal tracks that are more memorable because of the stock movie samples that precede them than the actual music. Just how far can a person push the promise of brutality as a selling point when there’s nothing else of substance to speak of? Let’s find out, shall we?

Primitive death metal is a generous descriptor for this band. Immolation is a simpler form of Morbid Angel, Incantation is a simpler form of Immolation, Mortician is the most basic, rudimentary and stripped down form of Incantation. No, really. “Onward to Golgotha” sounds exactly like this, the major difference is that Incantation combines atmosphere, dissonance and dynamics resulting in altogether more engrossing and suffocating experience - where Mortician is so single-minded with being horror-obsessed and underground that their music kind of becomes an afterthought in the never-ending quest to be the most brutal, the most downtuned, the fastest band in existence. Songcraft, musicianship, dynamics be damned - we have blasts aplenty.

Sadly, this has inspired many an underground band to the same ludicrous objective, resulting in heaps upon heaps of badly recorded, badly played and just all around awful music from anywhere in North America, Europe and all the way to faraway places like Asia and Malaysia. Yes, Mortician made an impact, but not the one you’d most likely want… or prefer, if you are the least bit discerning and have good taste. In truth this band is the punchline to a joke that stopped being funny a long time ago, say around 2000. Here we are talking about them yet again, obviously they must have done something right to warrant this amount of continued attention.

One has to admire the tenacity and hunger with what Rahmer and Beaujard attack their admittedly limited and limiting concept. While the tracks are interchangeable at best, the collection of stock movie samples is a feast for the average 70s-80s horror fanatic. The album opens with a sample from “When A Stranger Calls” and then continues to pillage through a mostly American and Italian library worth of shlock, grue and splatter flicks, which tick all the boxes for the death metal audience. Just take a look at which movies are sampled here: “Three On A Meathook”, “Cannibal Ferox”, “The Fog”, “The Road Warrior”, “Suspiria” and the earlier mentioned “The Texas Chainsaw Massacre”. What the band lacks in finesse, the well-chosen samples complement in atmosphere where there otherwise would be none. Since the lyrics are of sixth grade writing level, the only way this band is going to create atmosphere is through its (sometimes overlong) samples. It is surprising how well these samples actually work, when there is no rational reason for them to do so. Unsurprisingly, this record inspired tons of worse and better bands to include stock cult movie samples for years, no, decades to come.

Of the new songs ‘Bloodcraving’ is particularly strong, and mostly memorable because it is the opener of the record. Even the overlong intro sample from the original “When A Stranger Calls” doesn’t negatively impact the effectiveness and simplicity of the cut. Moreso, both the sample and the song actually work to complement one another, which is not something that happens often with band, or the death metal genre in general. ‘Deranged Insanity’ and ‘Three On A Meathook’ are better long songs, but they are no match for the opening track in scope and composition. As far as short bursts go ‘Embalmed Alive’, ‘Blown to Pieces’ and ‘Ripped In Half’ are worth mentioning. There are a number of re-recorded demo tracks, including ‘Drilling For Brains’, ‘Brutally Mutilated’ and ‘Necrocannibal’. The fact that the old tracks are more musically ambitious than the new cuts should tell you something. You could say that there’s a lot of filler present, and there is – or that any number of short tracks could be combined into one longer, better song; but this is Mortician after all. You come to this band for one thing and one thing only, intelligence and composition are not among those virtues.

The production is fairly balanced but not without its problems. The guitar tone is heavy, and nothing else. The sheer thickness of the guitar tone, and the amount of distortion it carries, is detrimental to the level of detail. The lack of clarity and definition adds to the underground feel, but is generally more of a hindrance than a help. The solos, for the one or two instances that they appear, are produced better and with more care than the muddy guitar tone. The bass guitar tone is cavernous, overbearing and swallowing all in its path. While it certainly provides the much-vaunted heaviness, it is downtuned to such a degree that it is nothing but formless noise. Rahmer’s subwoofer grunt adds another thick layer of bass, but offer little otherwise. The drum computer sounds slick and digital, and is reasonably programmed given this band’s limited skill – and writing level. The drum computer adds a mechanical, otherworldly feel to the proceedings and very much works like the sharp-pointed utensils wielded by the killers of the samples.

Everything else about this record is handled well otherwise. The digital artwork, which was heavily inspired by the original 1974 “The Texas Chain Saw Massacre” and the Ed Gein murder case, exudes exactly the right macabre atmosphere this record aims for. For the first time Mortician worked with artist Wes Benscoter, and the results are stellar. Benscoter would provide artwork for a number of future releases by this band. The photography is amateurish at best.  The band photo appears to be taken in some kind of rundown basement. Rahmer looks like a depraved biker, and Beaujard has the look of a sleep-deprived trucker. Both have their arms crossed, going for that “tough guy” pose, but one can’t help but notice how uninterested and, well, dim they appear in these promotional pictures. Photography would marginally improve after this album.

Like fellow American units Disgorge and Brodequin, these NY natives are nothing but a dusty relic of a bygone era in the death metal genre. Whatever limited appeal and relevance (as progenitors of the subgenre) they had in the first place is now long gone.  The last album they released was “Reanimated Dead Flesh” in 2003, and due to personal – and legal problems our undynamic duo is slowly but surely putting together new material. With the last Mortician record being a decade old, and with young, bright eyed and simply better bands taking the genre to exciting new heights and the old guard continuing to churn out their own brand of brutality and depravity, a person cannot but wonder how Mortician still figure into all this. The honest answer is that they don’t.