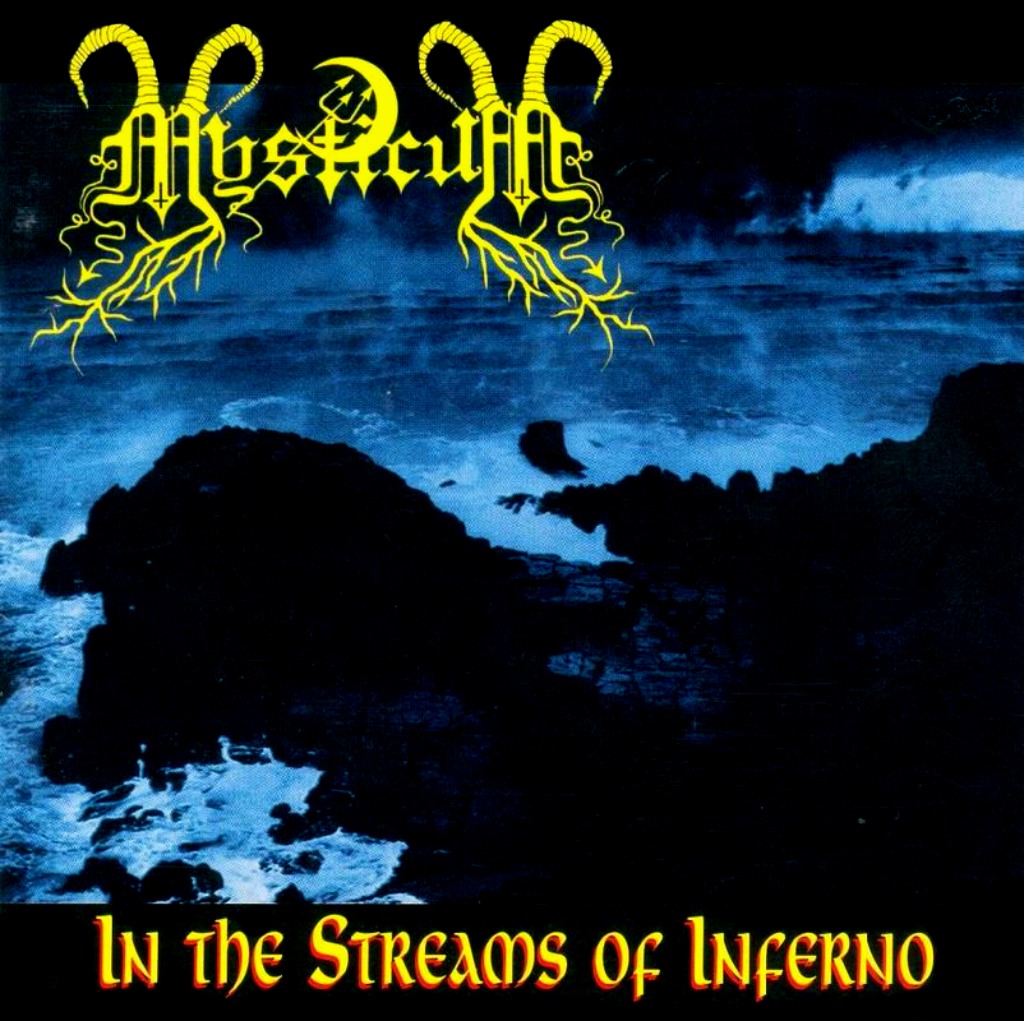 The times that an album’s cover artwork captures a recording’s general atmosphere as well as it does here are far and few. Mysticum’s debut album “In the Streams Of Inferno” is an intensely bleak, downtrodden, foggy and morose album. It was probably one of the earliest of its kind too, in 1996. Combining the harsh elements of Nordic black metal with the cold, inhuman and mechanical aspects of industrial, the band found an equilibrium that not only instantly set them apart from their peers, but laid the template for a subgenre. Unlike the copycat bands that followed in its wake Mysticum is equal parts black metal as it is industrial music. Both genres feed off concepts of alienation, estrangement and depression – that Mysticum was among the first to combine these genres speaks of their innovative spirit and willingness to think outside of the box and question the preconceived notions of the genre they called home. Thorns, Ulver and Dodheimsgard would venture into industrial and electronic territory later in their career – it was Mysticum that kicked open all the doors, it were they who laid the path.

The history of how Mysticum came to use industrial components for its rhythm section, and indeed the origin of the band is interesting in itself. The band was known prior as the formative industrial black metal outfit outfit Sabazios, who released a number of demos. The line-up in Sabazios was identical to the later Mysticum constellation, namely Benny Cerastes (vocals, guitars), Ravn Preben Mulvik (Prime Evil, also vocals/guitars) and Robin Malmberg (bass guitar, programming). Under the name Sabazios the unit independently released the “Wintermass” demo tape. This demo recording eventually led to a recording agreement with Oystein Aarseth’s label imprint Deathlike Silence Productions, and it was him who encouraged the band to switch names. Originally the record had a working title “Serpent Mysticism” and later “Where the Raven Flies”. Mysticum was originally signed to Deathlike Silence to release their first album that was entitled "Where the Raven Flies", going as far as to have promotional flyers printed bearing this album title - but due to Aarseth’s untimely passing it was never released under said title and imprint. “In the Streams Of Inferno” is a collection of re-recorded demo tracks, combined with new tracks specifically written for this recording session.

Around 1993-94 Mayhem had come to an end due to the incarceration, defection and passing of several of its key members. Left with no band second Mayhem drummer (and the band’s current figurehead) Jan-Axel Blomberg was enticed to join Mysticum behind the drums. When he decided that he wanted to revive the brand that made him the household name in the extreme metal genre, this left Mysticum in a bind. With their intended drummer no longer available, the band reverted back to the usage of drum computers. This would eventually lead to the album now known as “In the Streams Of Inferno”. A volatile and militant piece of Nordic black metal that flirts with elements of industrial and holds an unearthly, sci-fi atmosphere few bands were able to match.

Like there are two equally important and integral parts to Nine Inch Nails’ collective band persona - the abrasive, confrontational songs, and the more emotionally charged, fragile atmospheric tracks – the same rings true for Mysticum. The short intro instrumental ‘Industries Of Inferno’ (a clever phonetic approximation of the album title) is a soothing, all too short ambient track that recalls Nine Inch Nails’ own ‘A Warm Place’ from “The Downward Spiral”. Whereas Nine Inch Nails would eventually dedicate an entire half album’s worth to their more introspective, soothing and ambient material Mysticum would never go quite as far. Which is unfortunate because they were actually reasonably adept at such a thing.  Alas it was not to be thus we should make do with what we have. Once the atmospheric intro track has subsided the album truly starts.

‘The Rest’ kicks off with a martial industrial kickdrum beat that could easily be mistaken for a Eurodance beat of the same time period. Complementary to this basic beat is sparse usage of the snare drum, mostly in a marching, militaristic pattern. For a moment not considering the industrial aspect of Mysticum, there are a number of commonalities with pre-“In the Nightside Eclipse” Emperor, and not only vocally. For starters they share the same buzzing guitar tone and the riffing is largely similar in construction. As mentioned, the shrieking vocals also are akin to Ihsahn’s rasps in Emperor’s demo phase. Much like Emperor this band also uses minimal synthesizer lines to accentuate the riffs or enhance the atmosphere in general. Mysticum also play at a similar pace, but  the occasional foray into faster segments and the sparse usage of stock movie samples, among them, for example, the 1981 original version of “The Evil Dead” in the track ‘Let the Kingdom Come’ Mysticum is notably different and more individualistic in its approach in comparison to its arguably more popular and revered Telemark peers. By and large, Mysticum followed Emperor’s compositional lead – but kept its industrial components largely as a supportive device. The major difference with the creatively similar Limbonic Art is that Mysticum is about atmosphere, desolation and darkness primarily, whereas that other band was mostly about high speed and layers upon layers of keyboards and synthesizers.

The instrumental ‘In the Last of the Ruins We Search For A New Planet’ is exactly the type of post-apocalyptic sci-fi epilogue you’d reasonably expect of a band like this. The ambient rumble, the lonely plinking piano, and the light washes of keyboards all seek to do one thing: to create the most desolate, grim and cold atmosphere one would usually associate with the vast coldness of space, and the bombed out surface on an abandoned, blackened, lifeless planet. Just listening to this track you can easily image burned out, derelict buildings, the fog lifting and falling down, debris and dessicated human remains scattered everywhere with pools of fire burning as spheres in the nightsky look over that desolate vision as ominous watchers of fate. Somewhere, some place a radio is playing, sending out the desolate and repetitive tones of a slowly dying piano melody.

Interestingly Mysticum was one of the earliest known proponents of the industrial black metal sound. Yet nobody seems to lavish them with the praise they rightfully deserve in playing this groundbreaking new style in 1996. Only Switzerland’s Samael followed a similar path, but their 1996 album “Passage” was a transitional record, and it wasn’t until 1999’s “Eternal” that they fully embraced the industrial sound. The Dissection studio side-project De Infernali released an album in 1997, a full year after Mysticum’s debut. Dodheimsgard, a fairly pedestrian black metal band up to that point, didn’t jump on the industrial/electronic bandwagon until 1998-99. Even Italian experimentalists Aborym didn’t have a debut out until 1999. Thorns, the Norwegian band featuring Snorre Ruch, didn’t venture into industrial black metal territory until well into 2001. While all these later bands for some reason were heralded as innovators within their genre, nobody seemed to remember the fact that Mysticum predated them by several years. As is often the case with true pioneers, they are reduced to nothing but a footnote in the annals of the genre, as more readily marketable bands copied what they did.

As with many a debut most of the songs here are the strongest or most lauded cuts from the band’s earlier incarnation, and its subsequent demo recordings. “In the Streams Of Inferno” for the most part culls from the band’s archives, but also throws in a few entirely new tracks to differentiate the release from the demos that came before. ‘The Rest’ and ‘Wintermass’ are songs from the 1993 “Wintermass” demo. ‘Crypt Of Fear’ originally appeared in an earlier version on the “Medusa’s Tears” demo from 1993 as ‘Into My Crypt Of Fear’. ‘Where the Ravens Flies’, ‘Let the Kingdom Come’ and ‘In Your Grave’ appeared initially on the “Piss Off” demo from 1995. ‘Where the Raven Flies’ was known as ‘Where the Ravens Fly’ on said demo tape. All the other tracks were written and recorded specifically for this session. Strangely, there are no notable differences between the old and new tracks. Mysticum clearly knew what it wanted to do with this record, and the inter-song cohesion is truly spectacular. There would be a second Mysticum album a few years later, but “In the Streams Of Inferno” remains unmatched and unsurpassed to this day.

Mysticum gave a glimpse into the future, and it was bleak…