Plot: lesbian hitwomen face off against each other. A cop is caught in the crossfire.

Every director needs a muse. Roger Vadim had Brigitte Bardot and Jane Fonda. Mario Imperoli and Silvio Amadio shared a muse in Gloria Guida. Luciano Ercoli had Nieves Navarro. Sergio Martino had Edwige Fenech. Lucio Fulci had Catriona MacColl. Jess Franco had Soledad Miranda and later Lina Romay. Joe D’Amato had Laura Gemser. Hong Kong exploitation mogul Jing Wong on the other hand had Chingmy Yau, who was not only his muse but also his mistress. Yau had been starring in various capacity in Wong movies since 1988 but it wasn’t until Naked Killer that she was given her own production. While it never quite reaches the pomp of God Of Gambers (1989) and its sequel nor channeling the sheer derivative efficacy of High Risk (1996), Naked Killer is every bit as much a valentine to Yau as it is a preamble to have Chingmy entangled in various risqué positions and flattering outfits. Naked Killer might not be Jing Wong’s best offering, but in the English-speaking world it’s certainly his most remembered.

Allegedly made in response to Yukio Noda’s Zero Woman: Red Handcuffs (1974) with Miki Sugimoto, Jing Wong conceived Naked Killer as a Hong Kong action take on the Paul Verhoeven erotic thriller Basic Instinct (1992) while director Clarence Ford aimed for a contemporary take on Intimate Confessions of a Chinese Courtesan (1972), itself a HK variant of The French Sex Murders (1972). What Naked Killer actually looks like, at least most of the time, is a stylish erotic take on Luc Besson’s La Femme Nikita (1990). If Jess Franco’s psychotronic sleaze epic Vampyros Lesbos (1971) was reimagined as a ‘90s HK action movie it would probably look something like this. Naked Killer ostensibly spawned an unrelated parallel franchise with Raped By An Angel (1993) (passed off as Naked Killer 2 in some territories, despite having no connections to the original) carrying over various cast and crew, and becoming a lucrative franchise of its own, spawning 5 installments from 1993 to 2003. Wong, ever the philistine, would revisit the lesbian hitwomen concept to increasing diminishing returns again in Naked Weapon (2002) with Maggie Q and Naked Soldier (2012) with Jenn Tse but neither came close to the enduring cult appeal of Naked Killer. For better or worse Naked Killer brought Category III to Europe and North America at large. 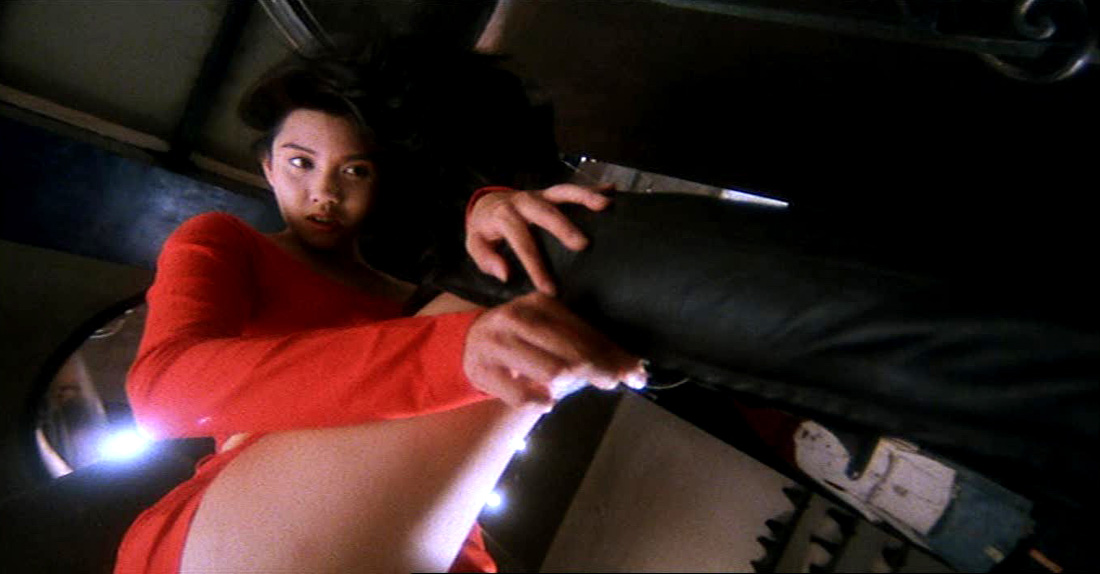 Up, front, and center of Naked Killer is Chingmy Yau Suk-Ching, the fairer half of one of HK cinema’s most recognizable power couples, who competed in the 1987 Miss Hong Kong beauty pageant, but withdrew under the guise of health issues after controversial allegations of plastic surgery on her chin arose. The veracity of the allegations seem to have never been substantiated. Yau was one of the leading ladies of Hong Kong cinema in the 1980s and early 1990s. She frequently worked with exploitation mogul Jing Wong. Having played good girl roles prior to her excursion into trash with Wong, Yau became one of the Hong Kong’s biggest sex symbols of the decade. There’s something strangely poetic (or romantic) about Wong, then a married man, casting his mistress in many of his productions of the time. Yau might have been the decade’s HK sex symbol but she refused, like her contemporary Amy Yip, to do full nudity as to not limit her career options. Wong on his part goes to ridiculous lengths to show as much of Yau as possible but also goes out on a limb to never fully expose her. Over the course of a decade-long career, spanning 55 movies, Yau was nominated three times for Best Actress at the Hong Kong Film Awards. Not just for respectable fare as I'm Your Birthday Cake (1995) and Hold You Tight (1998), but also for Naked Killer. In 1999 Chingmy Yau retired from acting and married Hong Kong fashion designer Shum Ka Wai, founder of fashion manufacturer I.T, with whom she has three children. Yau has been known for her charitable work and her eldest daughter Shen Yue recently modeled for UNICEF and has expressed no interest in entering showbusiness. 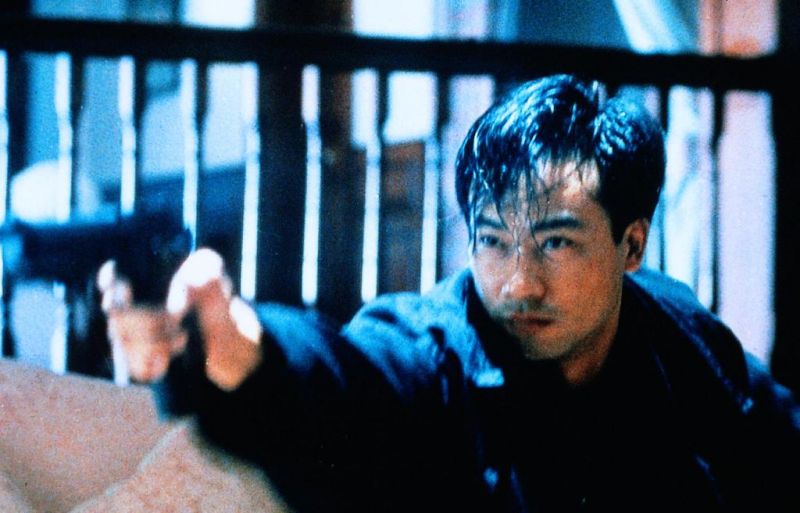 A recent string of random castration murders has the Hong Kong Police Force puzzled and detective Tinam (Simon Yam Tat-Wah) is assigned the latest of such cases. With results not forthcoming and Tinam still prone to projectile vomiting after accidently killing his police officer brother and unable to handle a gun, his commanding officer (Louis Roth) orders him to get a haircut. In the salon the HKPF detective witnesses a violent altercation between a particularly aggressive hairdresser and a flirty, scandily clad female client who identifies herself as Kitty (Chingmy Yau Suk-Ching) that ends with the hairdresser being repeatedly stabbed in the groin with a pair of shears. Kitty is able to flee the premises and Tinam gives chase. Kitty uses her ample womanly charms (and the detective’s gun) to convince him to let her go without questioning or making an arrest. A courtship between the two ensues as Kitty uses his pager to remain in contact. One day Kitty comes home to find her father (Chang Tseng), a food stand owner, killed by his wife’s lover Bee (Ken Lo Wai-Kwong). Kitty retaliates by infiltrating Bee’s Triad offices and killing absolutely everybody in sight before finally putting her crosshairs on the man she chose as target all along. On her way out she takes an older businesswoman hostage to facilitate her escape. As Bee’s henchmen close in on Kitty her hostage reveals herself to be Sister Cindy (Yiu Wai, as Kelly Yao), a retired special operative, and in the 70 second shoot-out that follows both women lay waste to all of the enemy agents as well as pretty much the entirety of the parking garage. 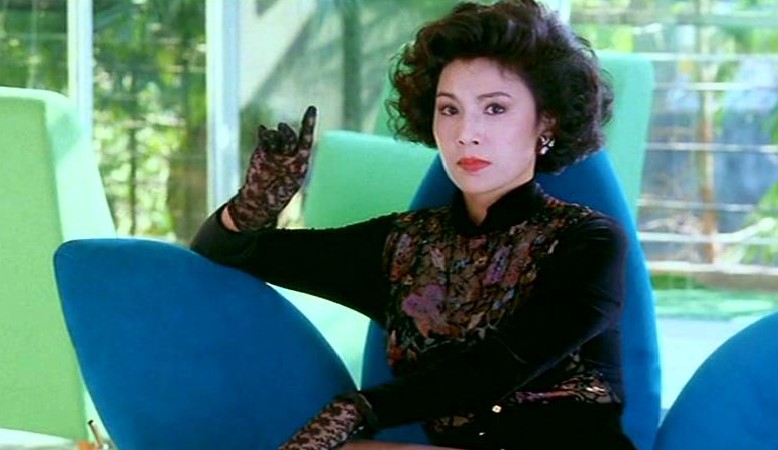 Recognizing Kitty’s penchant for casual mass slaughter and her appetite for wanton destruction Sister Cindy offers the young woman a deal. Either she will kill her or she can hand her over to law enforcement authorities which in no uncertain terms will mean life imprisonment. Kitty reluctantly agrees to become her disciple and before long she’s knee-deep into a regiment of martial arts - and special weapons training. On the side Sister Cindy instructs Kitty in the ways of seduction and destruction. Upon completion of her training she’s given a new identity and ordered to kill a high-ranking Yakuza target in a seedy nightclub. In retribution the Yakuza hire a pair of lesbian hitwomen Princess (Carrie Ng Ka-Lai) and Baby (Sugawara Madoka). Princess and Baby are revealed to be former disciples of Sister Cindy and will kill absolutely anybody for the right price, be they family or former mentors. Princess and Baby also happen to be lovers who don’t take kind to Sister Cindy having a new disciple. As the passion between Kitty and Tinam intensifies, the heat of the affair starts to spill over into their professional lives. In fact Kitty not only offers a solution of Tinam’s gun trauma but also solves his erectile problems at the same time. Princess and Baby are not amused by the male interloper as they secretly lust after Kitty. In the explosive finale Princess and Baby engage Kitty in battle to prove who gets to call herself the Naked Killer.

Unlike installments from the following decades Naked Killer has style to spare and will take every opportunity to relish in it. Its pop-art deco excesses easily match Jess Franco’s The Girl From Rio (1969) and The Devil Came From Akasava (1971) and Chingmy Yau gets to wear, and take off, some high-end fashion. The palette is vibrant and lively in its smattering pastel colors. During the final confrontation the rival hitwomen even don Phantom Of the Opera masks. The action direction by Lau Shung-Fung is up to par but it never reaches the creativity of the best work from Yuen Wo-Ping or Corey Yuen Kwai. 1992 was a particularly important year for Chingmy Yau as she would star in both Naked Killer and the manga adaptation City Hunter alongside Jackie Chan and Joey Wong. Yau had played a number of romantic and comedic roles by this point but Naked Killer was her first venture into something more erotic. Jing Wong was the subject of some controversy as he was engaged in a tryst with Yau while he was married. Hower, Wong always had a talent for spotting new talent and brought the world everybody from Sharla Cheung, Joey Wong, and Chingmy Yau to more recent belles as Valerie Chow, Charlie Yeung, Maggie Q, Jenn Tse and Candy Yuen Ka-Man.

The cast is as attractive as they come. Chingmy Yau is the obvious showstealer as the titular sexy assassin. Leading man Simon Yam, a model and Yau’s on-screen partner for much of the decade, is a strapping hunk. Sugawara Madoka, the only of the female cast to actually do any nudity, was Playmate Japan 1992. In fact if Naked Killer has a signature pose it is the crossing of one arm covering the chest. A pose that Chingmy Yau immortalized and etched in the memory of Hong Kong cinema fans worldwide, but that Sugawara Madoka also can be seen doing. Kelly Yao was both a singer and an actress but in recent years has found faith and now is an evangelical Christian. Carrie Ng on the other hand remains clothed through out while Sugawara does not. Ng had been acting for a decade by that point, while Sugawara acted in only a grand total of two movies in 1992-93. Wong’s juvenile humor is in full swing with Tinam’s partner (a cameo by Wong) mistaking a severed manhood for a sausage and T!nam’s tendency to projectile vomit. As always is Wong’s idea of humor far from sophisticated, crass, and wildly hit-and-miss. Category III movies had been around since the 1980s but it wasn’t until the explicit war atrocity expose Men Behind The Sun (1988) that directors and producers sought to capitalize on the taboo-prohibiliting rating. As far as Category III movies and the genre goes, Naked Killer is an extremely mild example of the form.

While Chingmy Yau has played a variety of roles for Wong over the years she remains the most identified with Naked Killer. Clearly it’s Wong’s valentine to his beloved mistress. Yau would make appearances in plenty of other Wong productions in the following years, including Future Cops (1993), City Hunter (1993), God of Gamblers Return (1994), and High Risk (1995). Jing Wong has returned to the lesbian hitwomen concept once every decade since Naked Killer. The episodes since have no connections to the original and as the productions became slicker much, if not all, of the mad frenetic energy that was present here has been increasingly sapped from the series. Naked Killer realizes just how ridiculous it is and continues to pile on until the entire thing threatens to collapse. That thankfully never happens, and whenever it does Wong throws in another shot of Chingmy Yau or Sugawara Madoka leering seductively at the camera. The Naked franchise has lost a lot of its luster over the ensuing two decades and Naked Killer remains by far the best of the bunch. Not only because it was the first but because it brims with style, oozes with excess and never takes itself too seriously. Perhaps God Of Gamblers (1989) is a much better title to get acquainted with Jing Wong’s deranged, mass audience antics – but there’s something about Naked Killer that he was never quite able to harness again. Naked Killer embodies the best of HK action cinema, although you shouldn’t take it too seriously. It certainly never does.