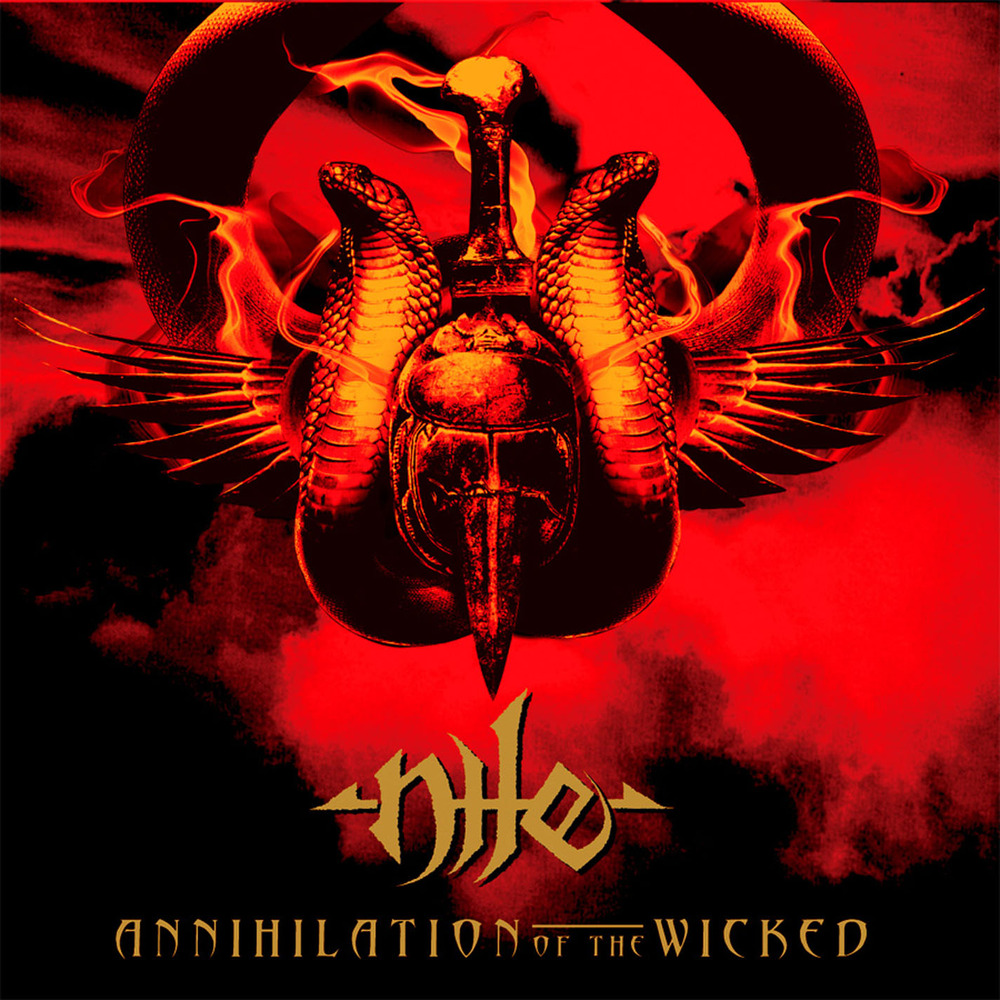 With their reputation established, a more or less stable line-up and the praise of the international metal press South Carolina band Nile had become comfortable within the little niche they had carved out for themselves over the years. With fans starting to salivate uncontrollably at the mere mention of a new recording, there was no incentive to push their sound into darker, more challenging territory. Never the great innovators, they enrolled Greek drummer George Kollias and Jon Vesano was reduced to studio musician status in order for him to combine his employment with being part of Nile. As a result this is Vesano’s last recording, although he would be involved on a session basis for later recordings. “Annihilation Of the Wicked” was the first Nile album to not bring anything substantially new to the table. After three records of carving out and redefining their core sound, the band was now perfectly content where they were at their current musical destination. So how exactly does “Annihilation Of the Wicked” sound? As a stripped down version of “In Their Darkened Shrines” more than anything, really – its angrier, faster and more drum-oriented, but nothing more than that. 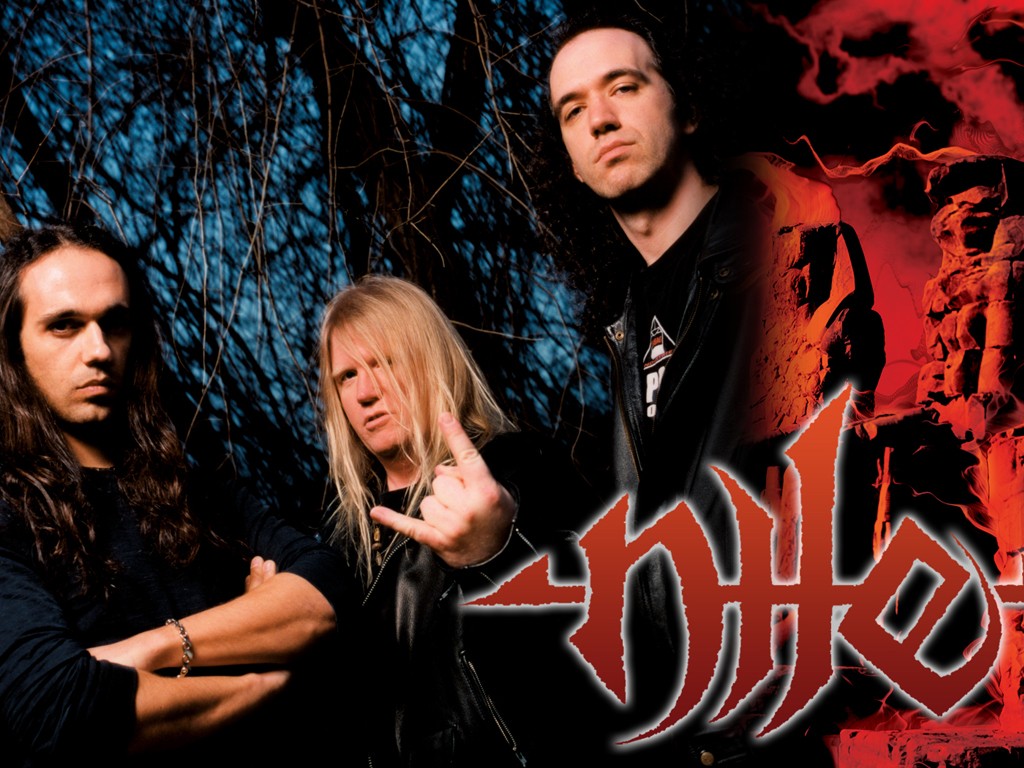 One of the great things about Nile is that they never lost a beat in replacing a member, no matter how well-loved or vital. Jon Vesano became a glorified studio musician, and Tony Laureano was duly replaced by Greek drummer George Kollias without any sort of hesitation on the band’s part. Kollias’ debut with the band is seamless, and while he has a wildy different style of drumming than Laureano, Roddy or Hammoura – he at least attempts to make the transition as painless as possible. The thing is that Kollias has a very busy sounding fill-oriented style, whereas Hammoura was more ‘open’ in his playing and Laureano had a more ‘circular’ style in the sense that he used every part of his kit at the most opportune of times. In terms of speed and intensity Kollias is at a similar level of skill as his illustrious mercenary predecessors. It also helps that the drum production is absolutely massive, and every part of his kit sounds stellar.

Another thing that is record is known for its minimal usage of ethnic instrumentation, monk chants and atmospheric interludes. Outside of the acoustic guitar intro, there’s only the instrumental track ‘Spawn Of Uamenti’ which tallies a grand total of 2 minutes combined out of a 52-minute album. It is as if Nile wanted to prove how brutal and technical they could be after the tour-de-force that was “In Their Darkened Shrines”. There are three signature tracks on this record, and they are mostly in the style of the band’s newfound appreciation for primal brutality than they are atmospheric. ‘Cast Down the Heretic’, ‘Lashed To the Slave Stick’ and ‘Sacrifice Unto Sebek’ are faster, heavier and more technical interpretations of their debut album’s basic sound all those years prior. No really, “Annihilation Of the Wicked” is the album “Among the Catacombs Of Nephren-Ka” always wanted to be, but couldn’t due to any number of contributing human factors. One cannot fault the band for that, as even the simplest of material of “Among…” took an unreal amount of talent, skill and discipline to master – the fact that “Annihilation Of the Wicked” is all that, but more technical, faster and demanding on all fronts is nothing short of awe-inspiring in terms of the musicians involved. That this would be the last worthwhile Nile record makes it even more bittersweet in retrospect.

Much of the writing style is similar to “In Their Darkened Shrines” with the difference that the band isn’t afraid to slow down every once in a while. The three-way vocal interplay is better organized than on the preceding record. Most of the vocals are split between Vesano and Toler-Wade with Sanders only sparsely contributing. The riffing is slightly more melodic, while the riff construction and note placement has evolved little since the record that became before. The bass playing mostly doubles the riffs, whether this can be contributed to Vesano’s studio-only involvement, or the writing on part of Sanders is something I’ll leave in the middle. Truthfully, the bass guitar lines were far more interesting in the records before this one. Here they mean nothing, and their contribution only seems to be that of bottom-end heaviness, but nothing beyond that.

There is a greater emphasis on lead/solo work with this album, which is a welcome improvement on all fronts. “In Their Darkened Shrines” already hinted upon such evolution and it is great to see it fully realized here. Whether it is Toler-Wade or Sanders delivering the leads/solos, they are sparkly and lively. Not that both of them ever reach Schuldiner, Suzuki, Santolla or Azagthoth-like levels of composition or excess, they are at least playing solos – and in a scene where that practice was rapidly becoming a lost art, such a thing has to be applauded. You could say that this album sounds far more Californian on a number of levels. The blasting and riffing tends to remind of early Deeds Of Flesh and Decrepit Birth, especially the latter that was rising to higher levels of prominence around the release of this record. Thankfully, Nile is far more musical than the average Californian death metal band. They were on this particular record, at any rate. There isn’t the same sense of cohesion and unity on this record as there was on “In Their Darkened Shrines”, and that kind of takes the effect down in any number of ways. At times it is even hard to tell where one song stops and the other one begins, but that is more of an ill of contemporary death metal than it is of Nile’s own undoing.

This would also be the last Nile record to remotely look good, because after this the band worked with a succession of lesser known cover artists that were hit-and-miss, to say the least. The most obvious offender in that regard is the direct follow-up to this record: “Ithyphallic” and the recently released “At the Gates Of Sethu”, which is equally as ugly in terms of cover art. Those albums unfortunate choices of cover art is nothing but a stark reminder that even big-budget, fully professional and international touring death metal acts can screw up as royally as their inexperienced underground peers. For the third time Wes Benscoter provided the artwork, while the design and lay-out was handled by Relapse in-house artist Orion Landau. The production by Bob Moore at Sound Lab in South Carolina is largely similar to the one of “In Their Darkened Shrines” with the biggest differences being the far cleaner guitar tone, and the absolutely massive sounding drums of new recruit George Kollias.

The album is perfunctory and reliable, but misses the highlights of the preceding record. ‘Cast Down the Heretic’, ‘Lashed To the Slave Stick’ and ‘Sacrifice Unto Sebek’ (for which the band shot a promotional video) are the songs that instantly stand out, and along with ‘Burning Pits Of the Duat’ they embody everything worthwhile about this release. It isn’t Nile’s best, it certainly wasn’t their worst – but expectations were only partially met. Still, at this point the band and this release were still head and shoulders above their many competitors and copycats. “Annihilation Of the Wicked” is a solid, reliable record – but nothing more than that.