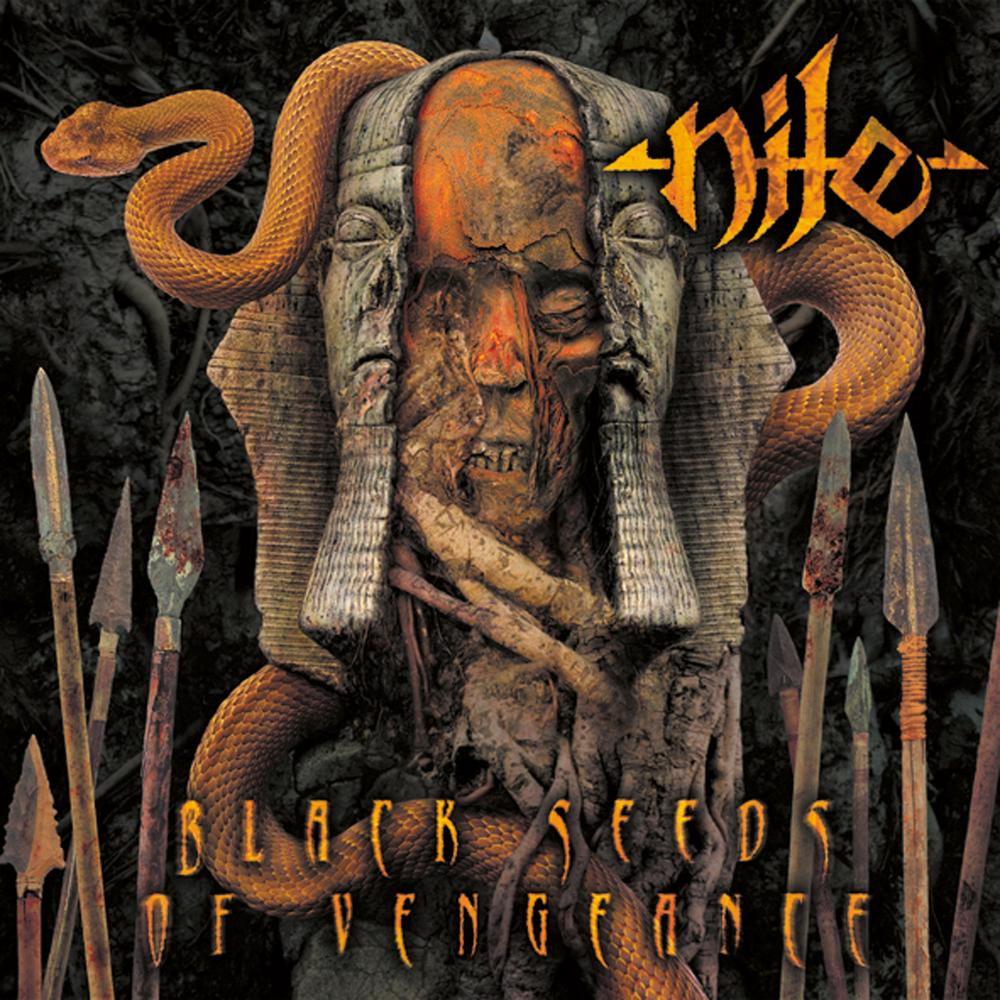 It is a difficult task to talk about a major band like Nile, and detail their shortcomings without rubbing long-time (or obedient? sycophantic?) fans the wrong way. These people tend to think in binaries and absolutes only, and every bit of criticism is met with hostility and anger. “Black Seeds Of Vengeance”, the band’s second record for Relapse Records, was their commercial breakthrough and the one that put them on the map internationally in terms of visibility and marketability. At a crossroads between the sound they had perfected through their demos and first album, and the growing technical expertise within the ranks, this album presents the band in a quandary. “Black Seeds Of Vengeance” would be the last record to feature original drummer Pete Hammoura, long-time vocalist/bass guitarist Chief Spires, and the first to include newly enrolled vocalist/guitarist Dallas Toler-Wade, who joined the ranks after the completion of “Amongst the Catacombs Of Nephren-Ka.” 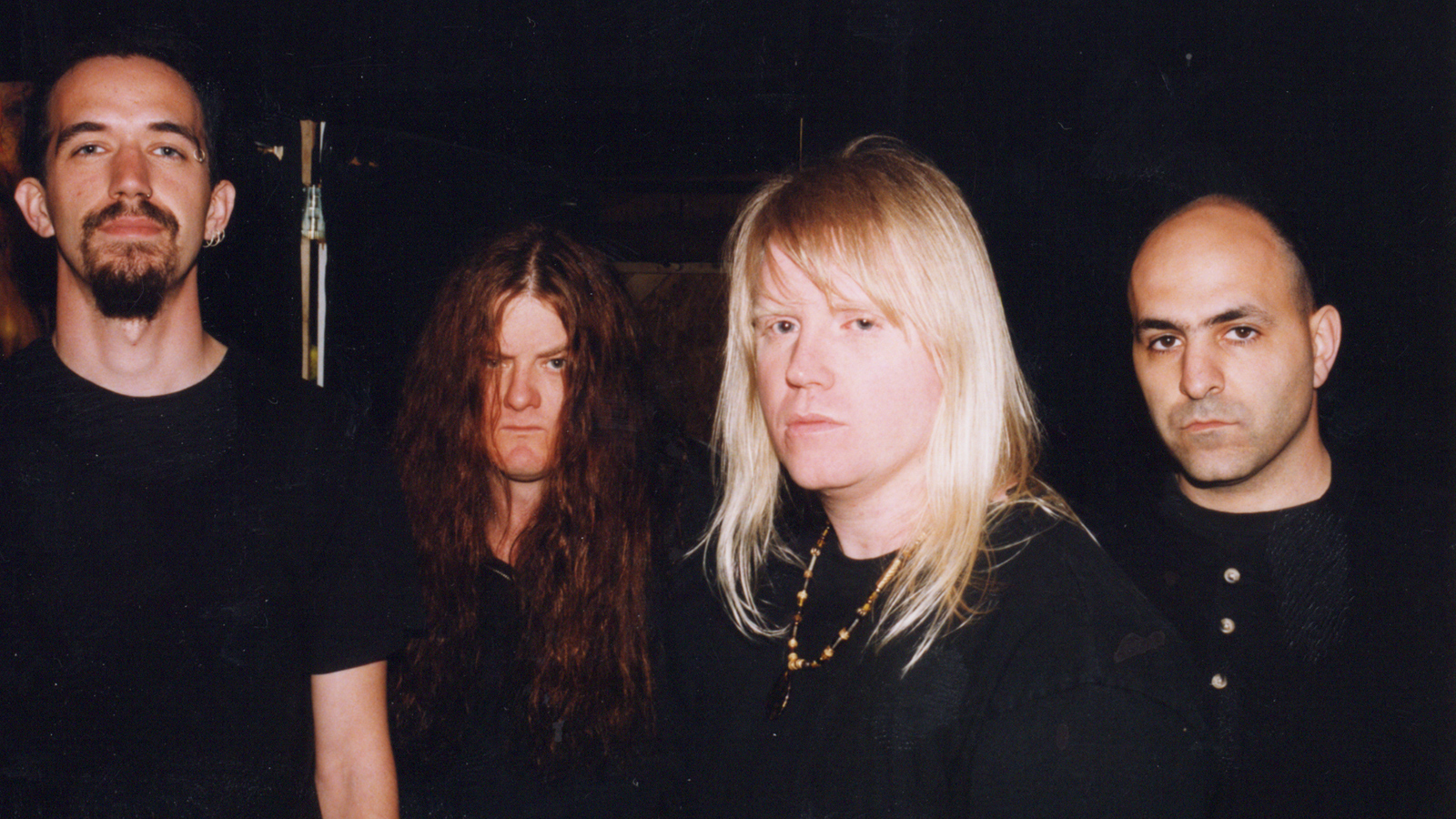 Important to note is that Hammoura only played drums on one song for these sessions, namely ‘To Dream Of Ur’. Having severely damaged his arm during the North American tour in support of the preceding album, Derek Roddy was called upon to perform the studio sessions. Tony Laureano would step in for domestic and international roadwork. Anybody with a keen ear will hear the slight difference in production on the Hammoura cut and the remainder of songs for which Roddy laid down the drums. The songs were written with Hammoura’s style in mind, and one can’t help but notice Roddy’s influence over these tracks with his precise and tight delivery. This second album is denser, busier and more demanding than the debut album. It also is more atmospheric and complex.

Nile might have been at the forefront of innovation in terms of merging death metal with Egyptian segues, instrumentation and highly atmospheric interludes – their approach to death metal wasn’t exactly novel or brimming with original ideas. Far from it. The album picks up where “Amongst the Catacombs Of Nephren-Ka” left off, and piles more speed and technical playing upon it. Still Nile is merely retreading old, well-trodden grounds. Incantation, Monstrosity and Vader are most recognizable among the influences and techniques used, and the three-way vocal interaction excepted – this is album is hardly as innovating as many people make it out to be. I’ll concede that the high speed and level of technical skill to play this sort of material is awe-inspiring, demanding and requires a level of discipline and commitment that few will have, or can muster. That doesn’t change the fact that Nile wasn’t really doing anything of interest with the genre. This is meat-and-patatoes death metal played at ridiculous speeds and with three equally impressive vocalists. Thankfully, the songwriting saves the mediocrity of the style.

The title track is a trademark example of the band’s style. Combining the riffing of Incantation, with “In Dark Purity” era Monstrosity formatted song structure and a “De Profundis” era Vader level of energy and delivery, the band is able to wear its influences on its sleeves without being accused of outright stealing their decimating riffs, chord progressions, or overall presentation. The Egyptian segue during the chorus is highly satisfactory and the sparingness of its use only serves to magnify the atmospheric effect. Another thing that Nile always understood is the importance of leads/solos, and a track as ‘Defiling the Gates Of Ishtar’ proves that in spades. The leads and soloing push the song to its climax, and proves that Nile doesn’t need its most recognizable gimmick to be thoroughly effective. The use of choirs and additional instrumentation adds to the flavor, but people come to the band for high-speed death metal first, all the rest distant second.

‘The Black Flame’ is interesting for the sake of its ethnic chanted intro, and its ominous slow building opening passage that channeled Morbid Angel better than the real thing at the time of this record’s original release. This is followed by an instrumental track before giving way to the second signature track of this album, ‘Masturbating the War God’. Nile hadn’t changed all that much in the two years since the debut, because this track is a retread of the “Amongst the Catacombs…” style, just a bit faster, more evenly structured and with a better sense of pacing and melody. ‘Multitude Of Foes’, the writing debut for Toler-Wade, is a high mark for the record and his more technical, bouncing and busy writing style plays to the strengths of all involved. The song forms the basis for the next record, and Nile’s gradual change into a more technical, percussive and speed-oriented outfit. ‘Chapter For Transforming Into A Snake’ follows largely the same technique, but is more in the style of the preceding record. It is redeemed by grace of its absolutely stellar lead/solo. ‘To Dream Of Ur’, the only track to feature Pete Hammoura, has a different snare – and kickdrum sound (fuller, warmer) and displays what could have been had he not been injured, and thus forced to bow out the unit he co-founded.

For the first time artist Wes Benscoter was allowed to craft the cover artwork, and combined with the graphics and imagery provided by Adam Peterson “Black Seeds Of Vengeance” was the best looking Nile product up to that point. The recording at Sound Lab in South Carolina with producer Bob Moore results in a more balanced production job with additional levels of clarity and definition. The instrumental segues and ethnic instrumentation sound more roomy and far better realized this time around. On all fronts there has been significant progress made by all involved in this production. Nile had proved its worth with a second album this ambitious and wide in scope. It wouldn’t be until the next album that the band would be able to pull off this style convincingly and confidently. As a stepping-stone to greater things and better, more involved songwriting this record is the logical and connecting link of the band's early evolution out of their primitive roots. Despite the overall banality of the death metal aspect of this record, it is worthy of interest and purchase – and recommended to those who adore Nile’s earlier, more primitive take on their genre of choice.