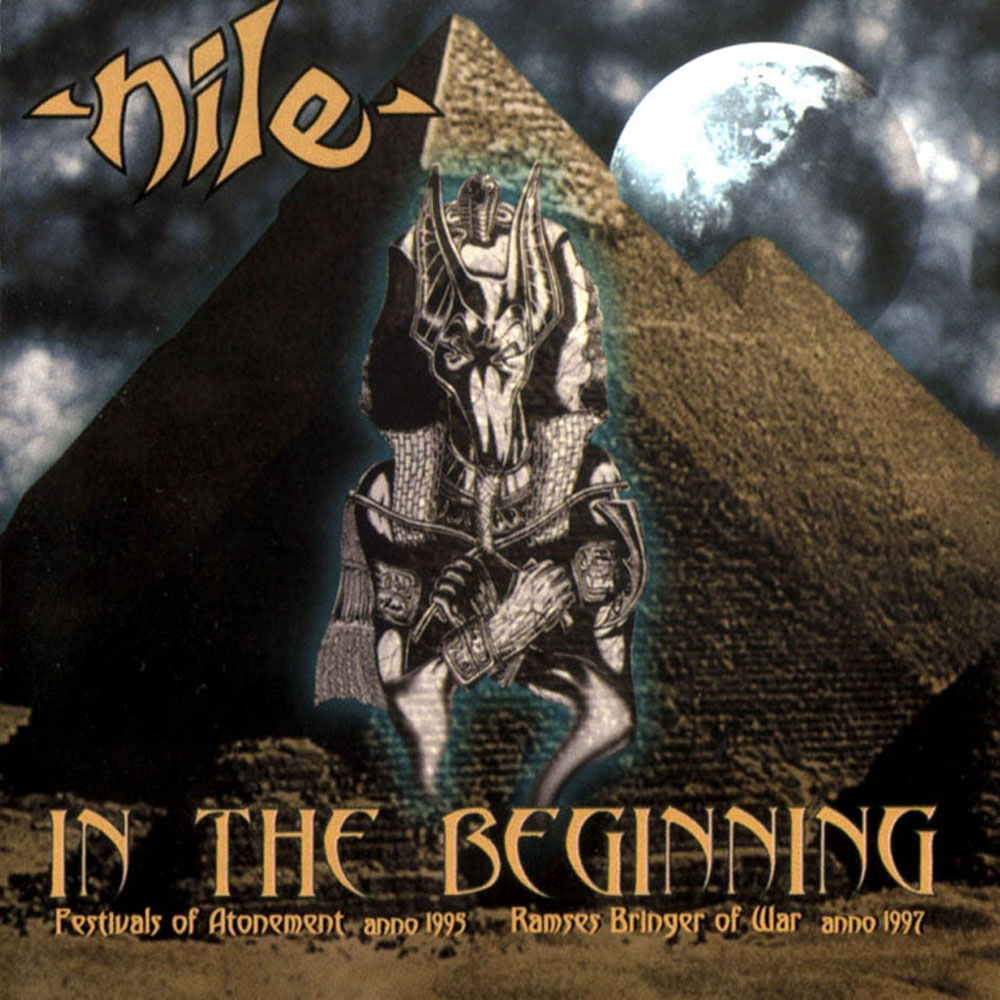 It speaks volumes of the amount of confidence that Relapse Records had in their newest signee to release this demo compilation as early as they did. Released in 1999, just one year after “Amongst the Catacombs Of Nephren-Ka”, and one year before “Black Seeds Of Vengeance” this compilation houses both the band’s demos: “Festivals Of Atonement” from 1995 and “Ramses Bringer Of War” from 1997. The self-titled demo from 1994 is curiously absent from this compilation, but would be re-released much later as the “Worship the Animal” EP in 2011. Which is understandable in a way, because here Nile sounds far closer to the sound they’d have on their official, label-sanctioned releases. “In the Beginning” sees Nile at its most primal, embryonal form – but already the band’s incredible sense for musicianship and arrangements shine through in these demos.

The album opens with the “Festivals Of Atonement” demo session from 1995. ‘Divine Intent’ is a strong opening with tribal drumming, but despite the impressive framework the track goes nowhere, and doesn’t deliver the climax hinted upon. There is a hypnotic charm to the repetitious riffing, and the thrash acceleration is highly effective. ‘The Black Hand Of Set’ is the signature track of this demo, and it is unclear why it wasn’t later re-recorded for the debut. The track is faster, more brutal and, more importantly, the most ambitious cut in terms of composition and arrangement. In fact, I’d wager a bet and say that ‘The Black Hand Of Set’ formed much of the template from which the band would later go on to write the subsequent demo. The use of Egyptian scales, melodies and interludes is understandably scarce, as both the band and their financial leverage, were at the minimum when this was recorded. The demo is also notable more conventional death metal in terms of arrangement and overall delivery. The whole is more loose, and not nearly as rigid and mechanical sounding as the band’s later recorded output.

Vocally, there is more of a thrash shout than any real grunting that is used here. The three-way vocal interplay between Karl Sanders (lead guitar), Chief Spires (bass guitar) and Pete Hammoura (drums) is introduced as early as this. All three men have a distinct voice, and the alternating of lines/verses is as effective and poignant sounding here as it would be years later. The solo’ing is present, but it is more restrained and conventional sounding than it would be in subsequent years and albums. ‘The Black Hand Of Set’ is the fastest, most technical track of this demo, and it forms the backbone of what the band would later write. It is the signature track of the demo, and is literally the stand out track, because no other track on the demo sounds as accomplished musically as this one. ‘Wrought’ starts off with an ethnic intro segment, but it is a superficial addition to flavor up the death metal violence. There is even some clean singing in this track. It is built off a similar template as opening cut ‘Divine Intent’ with tribal-like drumming and churning chord progressions that recall early Morbid Angel and Incantation in equal measure. The second half introduces some hokey sounding synths, but these are mostly redeemed by Pete Hammoura’s barbaric drumming and an excellent wailing guitar lead/solo.

Following this we arrive at the 1997 “Ramses Bringer Of War” demo session. All three tracks were written from the template of ‘The Black Hand Of Set’ from the preceding demo session. These cuts are significantly heavier, meatier and faster than the cuts from the 1995 session. It is not very surprising that all these three cuts would eventually end up in their definitive form on the band’s 1998 Relapse Records debut “Among the Catacombs Of Nephren-Ka”, along with seven new original tracks written specifically for the session. There are no significant different between the original versions and the renditions that later appeared on “Amongst the Catacombs Of Nephren-Ka”. The songs are played less fast, and somewhat looser on this demo recording – but beyond that and the lower production values there are no immediate differences in terms of writing. Notable is that “Ramses Bringer Of War” sounds far darker, malevolent and all around more brutal than the preceding demo. The grunting comes into full bloom, and Nile’s early writing is now finally complete. In five years Nile had undergone a steep evolution.

Both demos were recorded at Sanctuary Studios with producer/engineer Jimmy Ennis. Considering other demo tape releases of the time, it is surprising how good this actually sounds. There are shortcomings, of course, the production misses balance and not all instruments are evenly distributed in the mix. When the vocals, drums and keyboards play at full swing the guitars tend to get buried due to the limited channels available. The drums sound far more commanding and powerful than on the 1995 demo. The ethnic interludes and segues sound less strong than they would on the subsequent album, but this is merely due to financial – and time restrictions on part of the band more than anything. On all fronts Nile had made significant strides forward in terms of playing and writing, trimming all excessive fat and no longer meandering around aimlessly. It is not surprising that Relapse Records decided to contract the band based upon this tape. 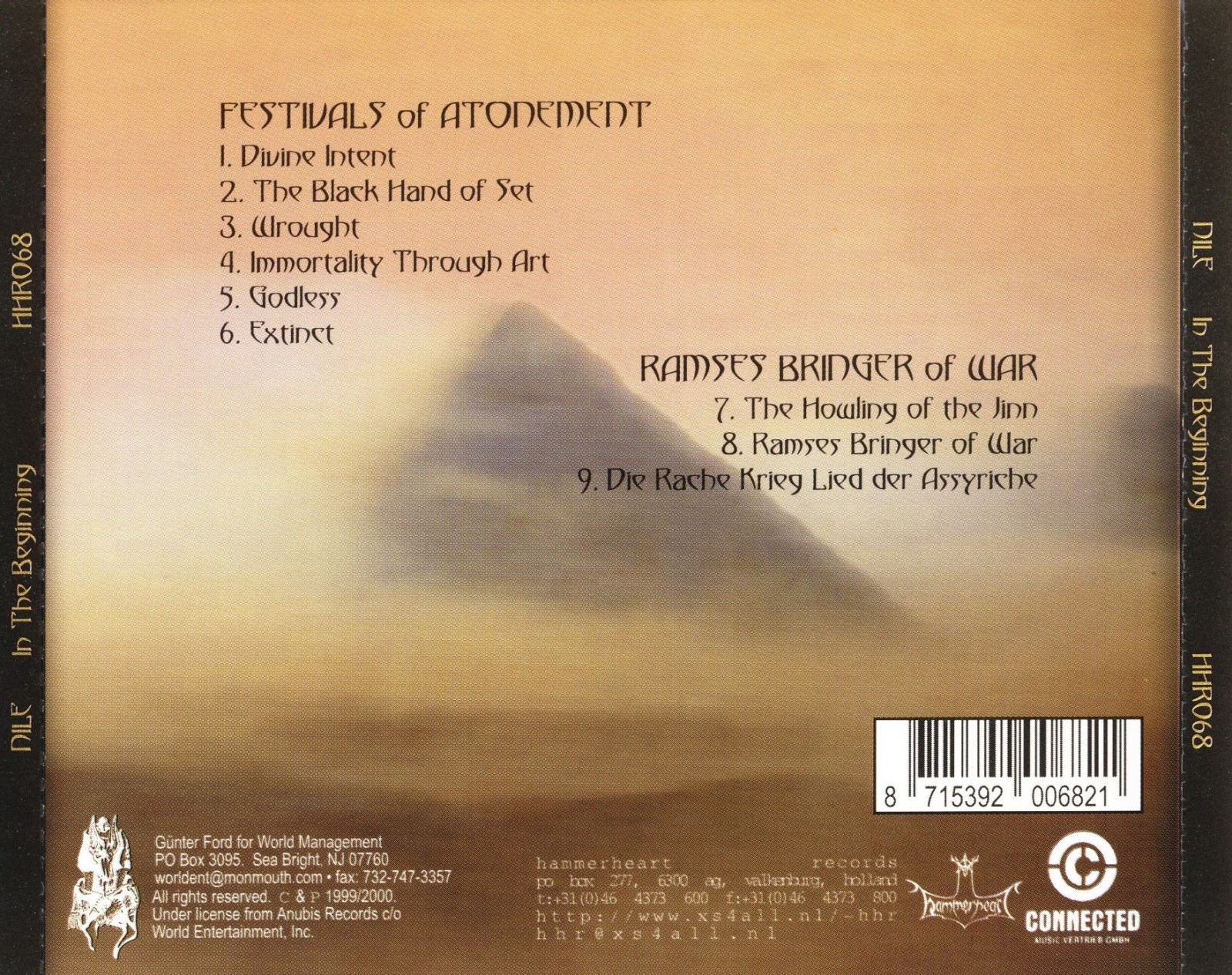 “In the Beginning” is an interesting historical document into the early years of one of South Carolina’s most identifiable death metal institutions. It will probably not appeal to the youngsters that go to know the band through their later records (say, “Annihilation Of the Wicked” and onward) – but those who adore Nile’s earlier, more stripped down direction will find this interesting to see from whence they came. It is a pity the self-titled demo wasn’t included here, because then one could have seen the band’s entire evolutionary transformation one step at a time. From the humble thrash metal beginnings and see the band’s gradual conversion in terms of skill level, writing and playing with each new recording venture into the highly respected band they are today. Those who love archive and historical recordings will find a lot to like here. “In the Beginning” is worth of a cursory glance, for old and new fans alike, to say the least.