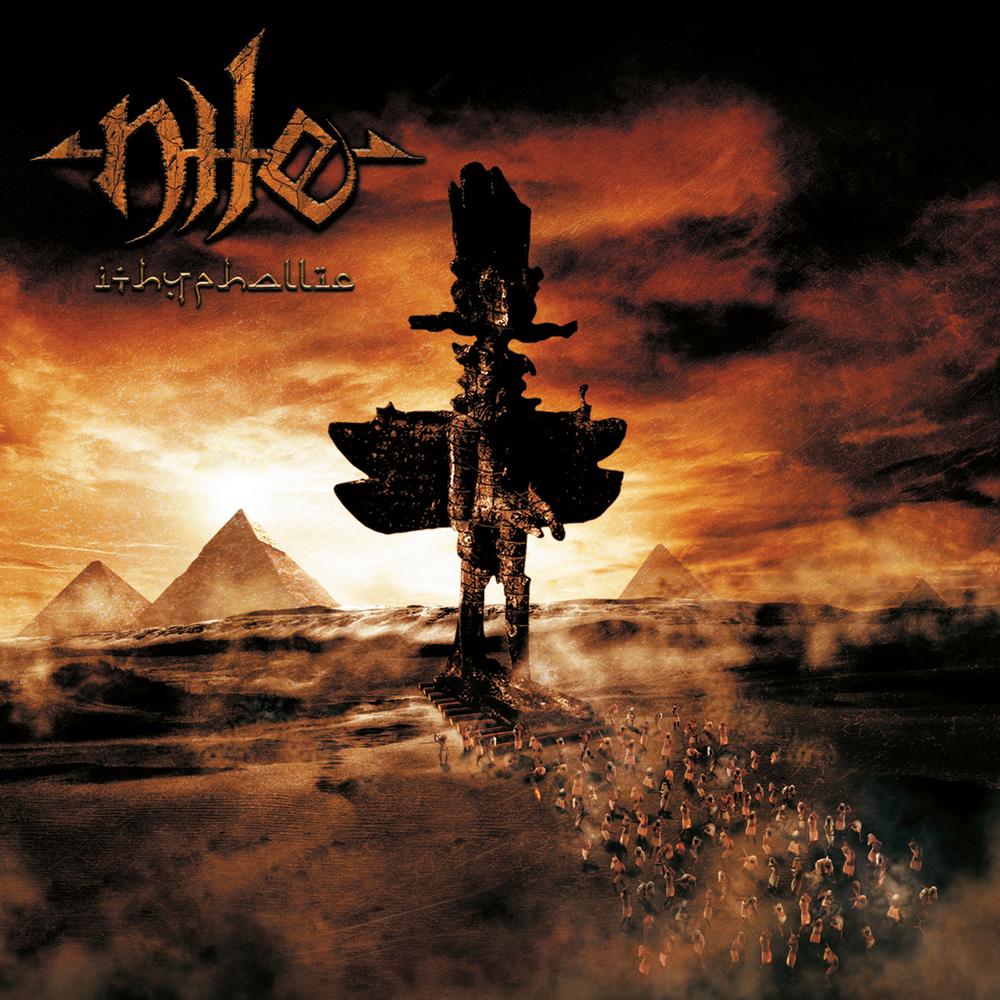 After the lukewarm “Annihilation Of the Wicked” Nile signed to Nuclear Blast Records. To say that the resultant album didn’t meet expectations would be an understatement. Whereas up to “In Their Darkened Shrines” the band had continually refined and honed its sound, here they are seemingly on autopilot. The previous album already toned down the Egyptian segues, but here they are virtually absent outside of the intro and the obligatory instrumental track. “Ithyphallic” is a lesser version of “Annihilation Of the Wicked” with all the shortcomings and defects that entails. Perfunctory would be an adequate descriptor for Nile’s Nuclear Blast debut - unremarkable would be another.

The increased vocal presence of lead guitarist (and studio bass guitarist) Dallas Toler-Wade isn’t the single detriment to this record, but certainly its most audible. Sanders’ indecipherably low grunt is heard only far and few times, the revered three-way vocal interaction of the past is traded in for a rather bland and stock vocal performance by lead guitarist Dallas Toler-Wade that is similar to George Fisher era Cannibal Corpse. It was apparent that after five albums the Nile sound was losing steam. Consistent to a fault this is the first of their records to reek of process and sound formulaic. That isn’t to say that “Ithyphallic” is actively bad, it just is too rigorous in its adherence to the established Nile sound, and the lack of atmospheric segues and Egyptian interludes only exposes that critical weakness further. Despite appearances “Ithyphallic” is actually a worthwhile record, but far from Nile’s best, and not exactly its most inspired sounding.

It is here that Nile starts its tendency to stretch out its song material for longer than is necessary, or wanted. ‘What Can Be Safely Written’ is in essence a 4-5 minutes long that is needlessly stretched out to almost 9 minutes. The song has a few memorable slow breaks, and the leads/solos are among the better in the band’s catalogue – but even then, the song is just too long for its own good. Thankfully it is only one of two instances wherein this happens. It would only become truly problematic on the successor to this record. The record stays enjoyable until the arrival of the dull mid-album dirge ‘Eat Of the Dead’, which is far from a return to the eerie death/doom trudge of the classic ‘Sarcophagus’. It is also the first track to have vocal contributions from founder Karl Sanders. What that track lacked in personality and power ‘Laying Fire Upon Apep’ has in spades, and its short running time works wonders for its effectiveness. Only the instrumental track ‘The Infinity Of Stone’ stands out because of how different it is from past instrumentals with its acoustic guitars and ethnic percussion. ‘Even the Gods Must Die’ is a gargantuan composition in tradition of ‘Unas, Slayer Of the Gods’ – and its opening is one of the better pieces the band has penned over the years, even though the song doesn’t live up to its monumental opening. While a lesser Nile is still better than most at their prime none of the material is really exceptional in any meaningful way.

The cards are stacked against “Ithyphallic” in a number of departments, most notably the artwork. We are far way from the wonderful Wes Benscoter artwork of the preceding records. “Ithyphallic” has artwork from Davide Nadalin, and it is grainy, dark and flat out ugly. It is a defect that much of the latter-day Seth Siro Anton works also suffer from. It is a mystery how he was able to commission any more of his work after this debacle. Imagine what this record could have looked like had it been graced by one of the canvasses of renowned artists Andreas Marschall, Jean Pascal Fournier, Mariusz Gandzel, Jowita Kamińska or Uwe Jarling – or one of contemporary digital artists of the day like Anthony Clarkson, Björn Gooßes, Jacek Wiśniewski, Matthias Norén, Dave McKean or George Prasinis. Coupled with the formulaic approach to the songwriting and the abolition of the superb three-way vocal interaction that adorned its early era output it leaves the record a mere shell of what it ought to be, and should have been. No amount of soul-wrenching solos, ethnic instrumentation and percussive propulsion can hide that this band had written far stronger material in the not too distant past. The record continues the stagnation that first surfaced on the so-so “Annihilation Of the Wicked”.

It is reliable and sturdy, but it doesn’t possess the compositional scope, the zest and the sheer hunger and aspiration to greatness that made predecessors “In Their Darkened Shrines” and “Black Seeds Of Vengeance” so memorable in the long run. The album is all about efficiency, and just like the typical intro is merged into the first song, there was no bass guitarist present for these recordings. Instead Sanders and Toler-Wade shared bass guitar duties in the studio when the album was being recorded. The performances of each member is top notch, and the recording by Neil Kernon was the best Nile experienced up to that point. The session was engineered by long-time producer Bob Moore at Sound Lab in South Carolina, and Kernon ensures that the band lives up to its mammoth source of inspiration. Moore was only responsible for the drum tuning for these sessions. On the whole “Ithyphallic” lacks the songwriting character and vitality of any of the band’s preceding records. The flagrant mishandling of the lay-out is another strike against what should have been a favorable big label debut. “Ithyphallic” is a mixed bag in terms of songwriting, and while it was the most pristine and professionally produced of Nile’s records up to that point, it was also its most generic.