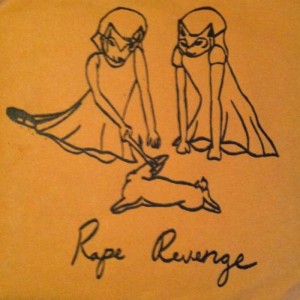 Calgary, Canada fastcore/powerviolence unit Rape Revenge was only around for a brief three years. In the timespan from 2009 to 2012 they released two albums (which accounted for an EP each), of which “Rape Revenge” was the first. Shunned in their own region because of their outspokenness on a variety of socio-political subjects, straight edge/vegan lifestyle and DIY ethos Rape Revenge was the Canuck equivalent to incendiary Michigan, Detroit band Cloud Rat. This self-titled debut is a loosely conceptual, 10 track effort about animal rights, feminism, gender politics and egalitarianism.

Rape Revenge was formed in Alberta in 2009 by frontwoman Samantha Trees and drummer Matt Elbows, with a revolving cast of guitarists and bassists. On its debut recording Rape Revenge had a mostly female line-up consisting of Keaton Pridham (guitar), Arielle McCuaig (guitar) and Gwen Morgan (bass guitar). For its second EP saw both replaced by male members. Pridham fronts his own post-rock band Whale Mountain and experimental hardcore band Deformer. McCuaig and Morgan would resurface in garage rock band The Shrapnelles and pop-punk trio The Throwaways. Elbows has his own vegan powerviolence band Lab Rat, whereas Trees cut her teeth in indie rock band Eyes Full Of Stars and hardcore band Self Rule. 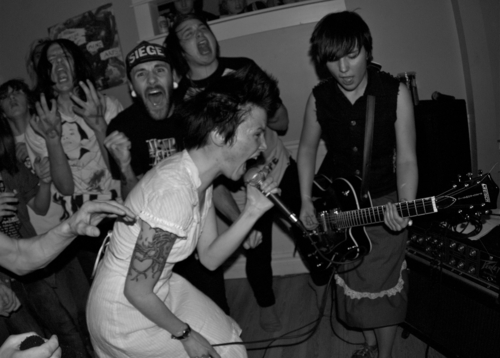 Much like defunct Slovakian grindcore outfit Idiots Parade simplicity and a brevity are Rape Revenge’s fortes. The band is squarely on the grind spectrum of the fastcore genre. The pace is utterly relentless and unforgiving. Trees easily matches Idiots Parade’s Petra in sheer ferocity and pitch. Like many of their contemporaries the bass guitar features prominently in the music. The riffs balance between punk, hardcore and sludge without pinning themselves to one specific genre. Only two songs come close to reaching the one-minute mark. Like most bands of this ilk it are the vocals and drumming that truly sell the record. Trees and Elbows are no slouches in their respective departments. Rape Revenge, both band and album, are inexorably aggressive, chaotic and violent.

‘Car Ride With A Vivisection Intern’ is about animal lab testing. ‘I’m Not Your Fucking Mother’ is about misogynist attitudes, mutual respect among the sexes and socially conditioning and gender roles. ‘I’m So Gay’ is a protest song against homophobia. ‘Dear Date Rapists Of St. Albert, AB’ is about rape culture, male domination and the culture of violence that inhabits the hockey teams in and by the more affluent parts of Alberta. In the track Trees makes no mistake about her intentions with such perpetrators, ‘If I find you / I’m going to fucking kill you’ she screams horrified. ‘Fuck Your Gender’ is about gender binarism and - identity. ‘Beauty Myth’ concerns body image, and has Trees screaming ‘it’s a lie!’. ‘Women’s Studies’ is about breaking away from established gender stereotypes and supports elagitarianism. ‘More Mosh, Less Macho’ deals with chauvinism and patriarchal attitudes in the hardcore scene. ‘Burn These Bridges’ is about overcoming oppression that women and girls face in modern day society.

Its confrontational, thought-provoking lyrics and frank outspokenness on a number of socio-political subjects led to Rape Revenge being shunned in the Calgary underground scene. Trees, who works as a counselor to sex workers, speaks with a degree of authority on the subjects she tackles as she experienced them first-hand or through her employment. The minimalist recording, and the band’s taut delivery of its stripped down and abrasively direct music, put all the focus on Trees and her politically-motivated lyrics. “Rape Revenge” is no easy listen, aesthetically as well as sonically - and that’s exactly the point. Grindcore, like punk and hardcore from whence it came, is about socio-political awareness and protest. Rape Revenge take the genre’s objective to heart and this EP is proof that the band wasn’t afraid to put its money where its mouth is.

Surely there are other, more marketable, bands just like it in various parts of the world – but seldom does a debut record crystallize the sheer essence of a genre as well as “Rape Revenge” does. What “Scum”, Napalm Death’s 1987 debut, did for the genre at its inception Rape Revenge does for the genre today. Explosive, subversive and relevant to the problems of its age and constituency – the record drags the tired and often imitated genre kicking and screaming away from the pangs of commercialism and back into the hands of the disenfranchised, the disillusioned and the dismayed. “Rape Revenge” has no ulterior motives except to confront the listener with the nasty underbelly of a male-centric society. They won’t stand for it, and neither should you. It’s time to act.