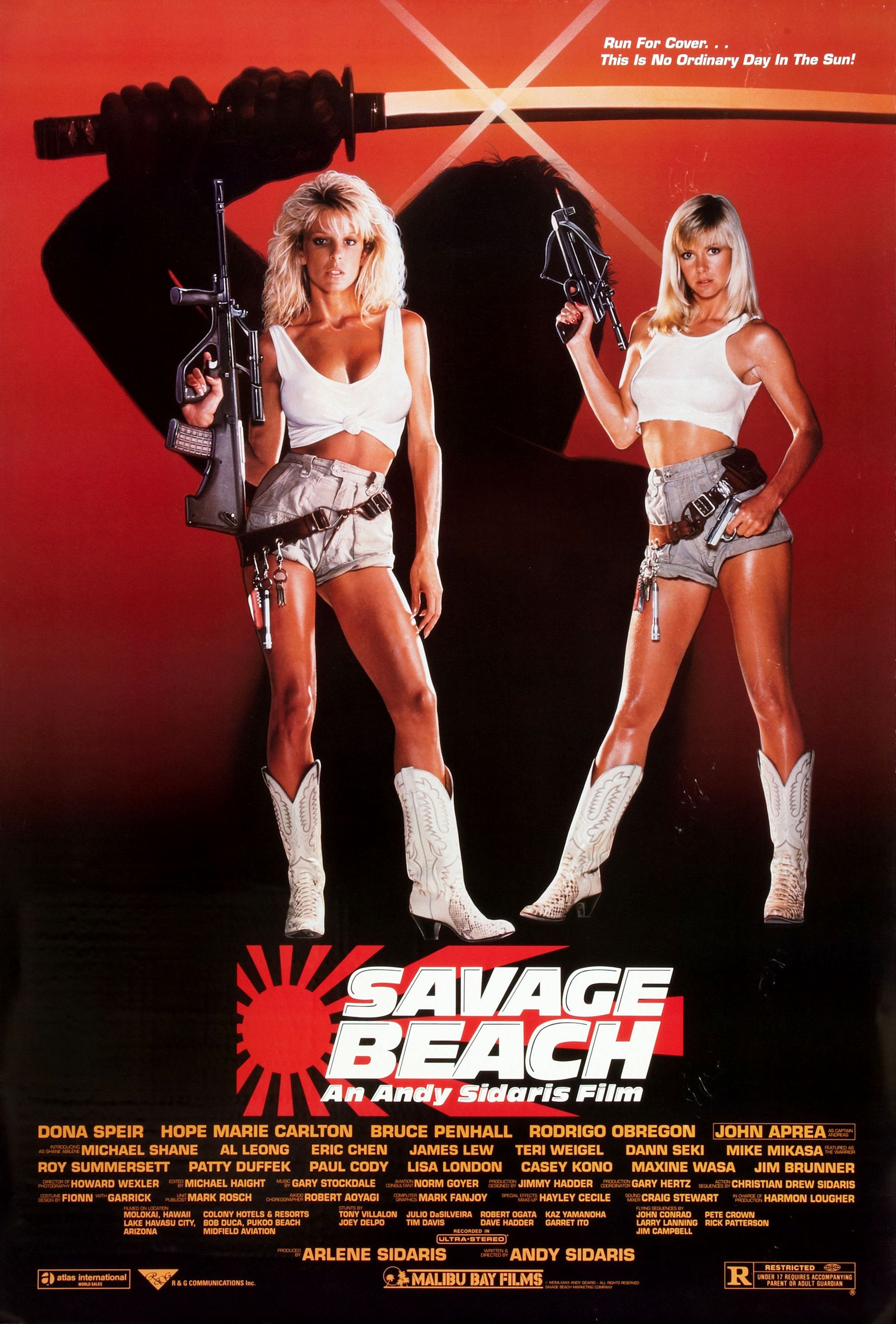 Plot: what happens on Savage Beach? LETHAL Ladies are on the case.

The LETHAL Ladies franchise closed the door on the exuberant eighties with Savage Beach, the least typical of the early era. Savage Beach not only spends inordinate amount of time on what amounts to a B-plot but also puts a greater emphasis on adventure than any of the prior installments. For the first time the LETHAL Ladies find themselves as passive spectators, and occasional participants, in a conflict between two warring factions. Savage Beach was the swansong for Hope Marie Carlton with the series and creator Andy Sidaris ensures that everybody gets a good gander at her considerable talents one last time. In what is now established Sidaris tradition Savage Beach delivers big explosions, ridiculous shoot-outs, and beautiful beach babes in candy-colored bikinis in spades.

First they received a Hard Ticket to Hawaii (1987) and later they protected the valued Picasso Trigger (1988), now federal agents Donna Hamilton (Dona Speir) and Taryn (Hope Marie Carlton) are in the process of rounding up another round of drugdealers with help from trusted assets, or rather the assembled assets of,  Rocky (Lisa London) and Patticakes (Patty Duffek). With minutes to spare the girls catch some rays and hop into the hot tub before receiving a call from John Andreas (John Aprea). Andreas sends Donna and Taryn en route on a humanitarian mission to deliver medicine and supplies to Knox Island. After being informed that one Shane Abilene (Michael J. Shane) will be assisting them, they both hysterically scream, “another Abilene?!” Crashlanding on the island they were supposed to deliver supplies to Donna and Taryn find themselves in the midst of a vicious tug of war between a band of mercenaries and a government para-military unit vying for the same gold treasure. Who is the mysterious katana-wielding figure (Michael Mikasa) guarding the gold cache? Will stuff blow up and will there be plenty of jiggling naked breasts for everyone? 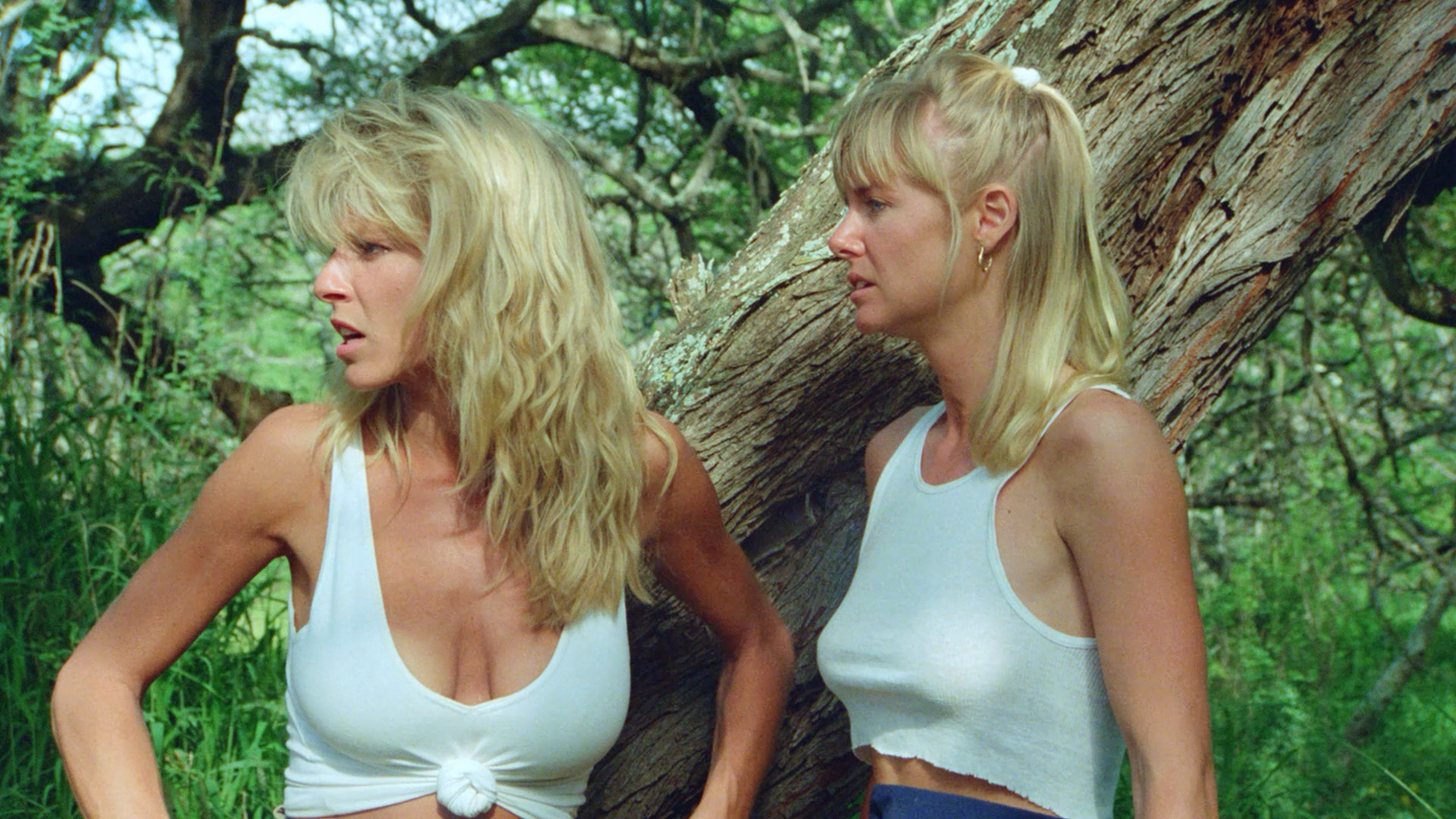 Having produced the prior three LETHAL Ladies installments from his personal funds, director Andy Sidaris was offered a lucrative production deal to expand his beach babes action movie vision into a full-blown pentalogy. Of said 5-picture deal Savage Beach was the first and missing in action are Cynthia Brimhall, Roberta Vasquez, Kym Malin, and Liv Lindeland. Also unaccounted for is Patrick LaPore as the Professor and Harold Diamond as The Agency strongman Jade. Substituting for her fellow Playboy Playmates is Teri Weigel (April 1986), one year away from having bit parts in Predator 2 (1990) and the Steven Seagal actioner Marked For Death (1990) – and her subsequent descent into hardcore pornography. Weigel is first seen in company of Shane Abilene (Michael J. Shane), another member of clan that included Cody, Rowdy, and Travis. To absolutely nobody’s surprise Anjelica is in cahoots with scheming Filipino representative Rodrigo Martinez (Rodrigo Obregón), in what looks like a subplot repurposed from the preceding Picasso Trigger (1988).

Thankfully Savage Beach keeps the LETHAL formula intact while excising all extraneous characters and most of Sidaris’ typical distractions. Savage Beach is all about efficiency. As there’s no Professor around there are no remote-controlled models, and no explosive-charged gadgets, neither are there any second-act amorous liaisons, and the main plot seems borne out of convenience. For the first time in the series do Donna and Taryn not actively engage with the main plot, at least not until their own little subplot ends up intersecting with it. Sidaris’ whimsical humour manifests itself when Donna and Taryn - who seem to wear tank tops and bootyshorts into perpuity when they are wearing clothes at all - crash on the island. Instead of foraging food and seeking shelter, the first thing the two do is check out the beach and go skinnydip. Weigel gets to spew political diatribes before, during, and after taking her clothes off. Continuity, either from one movie to the next or in them, was never Sidaris strong suit. Savage Beach has the case of the duo’s camouflage paint disappearing in between scenes. 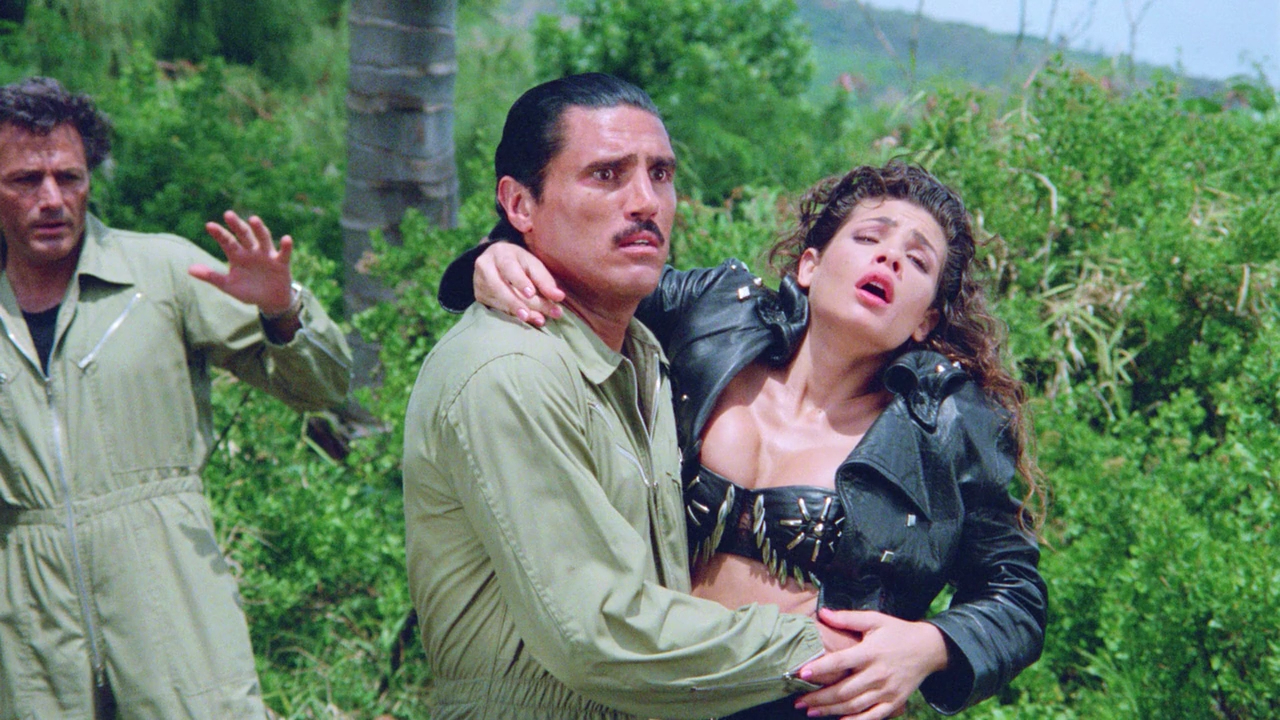 Besides the usual amount of Playboy Playmates and stuntmen Andy Sidaris was in the habit of contracting well-known character actors in supporting roles. Savage Beach has Al Leong, famous for his bit parts in Lethal Weapon (1987), Die Hard (1988), and Bill & Ted’s Excellent Adventure (1989). Lisa London had a bit part in the fourth Dirty Harry installment Sudden Impact (1983). John Aprea, Bruce Penhall, Roy Summersett, and Rodrigo Obregón were Sidaris stock talent, as were Dona Speir, Hope Marie Carlton, and Patty Duffek. Michael J. Shane receives an “introducing” credit. After her acting tenure Hope Marie Carlton, who featured topless in an unaired pilot for the popular series Baywatch (1989), opened and ran the popular Sorrel River Ranch Resort in Moab, Utah. Hope Marie Carlton moved to Colorado once her marriage had ended in 2005. 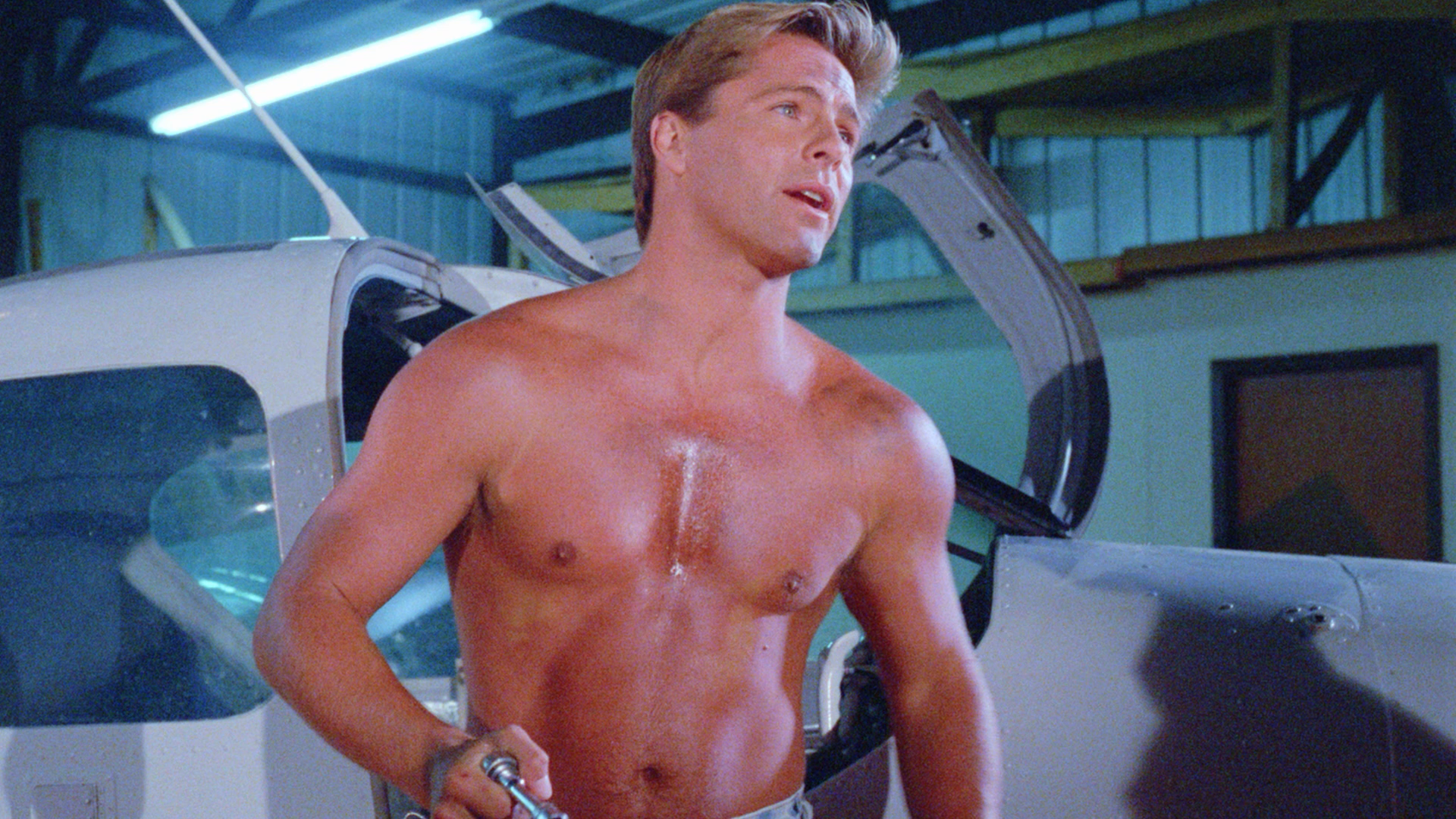 Savage Beach is a monument to a bygone age. It was an episode of endings and continuations. Dona Speir transitioned into the 90s with the franchise, becoming the franchise mascot in the process, at which point Hope Marie Carlton bade the series farewell. Carlton was suitably replaced by the curvaceous Roberta Vasquez. Vasquez was absent in Savage Beach (1989), but returned as a completely new and benevolent character in Guns (1990), as did Liv Lindeland. Vasquez remained a series regular until Fit to Kill (1993) while Lindeland moved on after Guns. Speir exited the franchise after Fit to Kill (1993) at which point Penthouse Pets Julie Strain, Julie K. Smith and Shae Marks took over The Agency mantle for Day Of the Warrior (1996). Andy’s son Christian Drew Sidaris shot two of his own LETHAL productions in the interim between Fit to Kill and Day of the Warrior. The parallel sequels Enemy Gold (1993) and The Dallas Connection (1994) retroactively serve to link the 1980s and 1990s Sidaris the elder periods. The concluding Andy Sidaris directed episode Return to Savage Beach (1998) saw the Julies, Strain and K. Smith, return to Savage Beach in what can only be construed as a loving homage to the original, which didn't stop Sidaris the elder from pilfering it for footage. 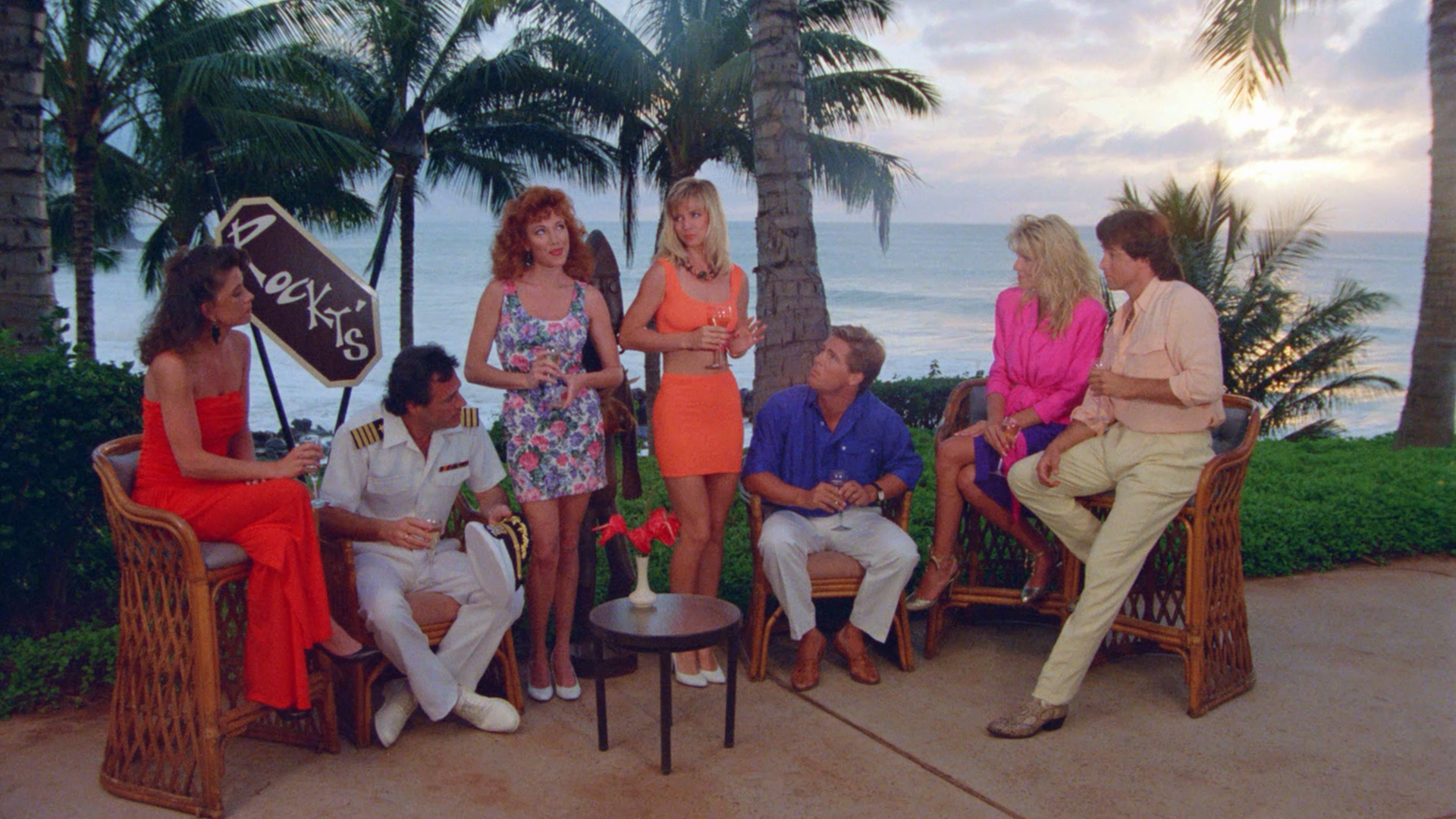 Andy Sidaris can hardly be accused of not giving his audience exactly what they want. However even by Sidaris standards Savage Beach is just a wee bit on the thin side, both in terms of plot as well as the heavily-slimmed cast. Speir and Carlton have grown comfortable in their roles as gun-toting, wisecracking, top-dropping action babes and the chemistry between the two is undeniable. Perhaps it had been better if Speir and Carlton had been active participants in the main plot, rather than passive spectators – and some of the warrior’s stalking scene resemble a Hawaiian slasher. The World War II flashback scene was ambitious, but was kept low-scale enough for the limited budget Sidaris was working with. What can be counted upon is that there’ll be plenty of bouncing naked breasts, and if there’s any beautiful good character introduced, there’s a good chance of her shedding fabric in the following scenes. Sidaris never aimed for high art, and his movies are as pulpy and exploitative as they look. For what it’s worth, at least an Andy Sidaris romp always delivers what it promises. Sometimes bigger, sometimes lesser – but they are consistently entertaining.