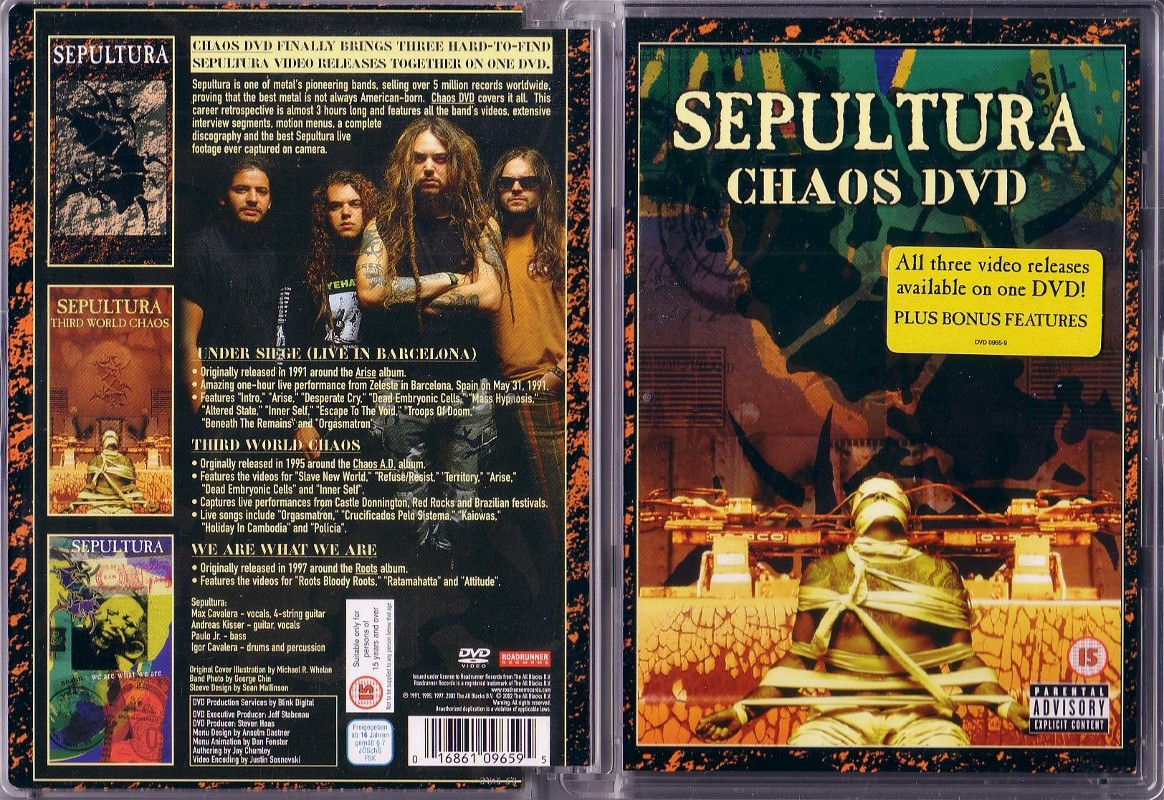 In 1991-1994 Sepultura was at the height of their power and popularity. It is therefore not very surprising that their then-label Roadrunner Records sought to capitalize on their success after years of heavy touring and recording. In the wake of DVDs in the early 2000s the label re-issued the band’s previous VHS “Under Siege” and the then-brand new “We Are What We Are” (compiling the “Roots” music videos) together with a pseudo-documentary and live recordings under the uncreative moniker “Chaos DVD”.

The first thing you’ll notice is exactly how crappy and cheaply made the entire package is. The DVD is split into three different sections: there’s the “Under Siege (Live in Barcelona)” recording from the “Arise” world tour, the “Third World Chaos” video from the “Chaos AD” world tour and finally the “We Are What We Are” video from the “Roots” era, featuring all three videos of that album. The “Under Siege (Live In Barcelona)” segment is the most worthwhile, as it features an entire live show from the mammoth “Arise” world tour, interspersed with short interview bits. It is unfortunate that these interview bits can't be skipped (or viewed in their entirety) as the live show is what most fans will shell out hard currency for. Likewise had these interview parts better be given their own separate chapter. This way both interests would have been served simultaneously. Nevertheless this is the only really worthwhile segment of the three present on this DVD. That is less than half of the DVDs content, which is a sad state of affairs considering Sepultura were one the label’s biggest sellers back in the day.

“Third World Chaos” is the most widely known video release of the band, and the way it is amateurishly cut and edited speaks volumes just how skewed metal DVDs generally are put together. It is the usual jumble of random live recordings with uninteresting backstage videos, the band goofing off/being drunk, TV interviews and on-the-road footage spliced together with all of the band’s music videos up to “Chaos AD”. The audio and video quality varies heavily from section to section, and there’s no flow (besides chronology) to the whole. That it spents extended time on a scatological joke is the least of its problems, which run far deeper than juvenile humor. It starts off with the band’s then-most recent material and works it way back to the days of “Beneath the Remains”, their breakthrough record for the label. Sepultura’s stint with Cugomelo Records is ignored entirely. That is understandable in a way, but Roadrunner had already re-issued the often ignored “Morbid Visions/Bestial Devastation” and “Schizophrenia” albums by this time, which gives them no good excuse to ignore that part of the band’s early history. There’s no possibility to choose and play separate chapters, or only the promo videos – which begs the question why this was released on DVD format in the first place. That it wasn’t possible in its original incarnation was forgivable, as that was on the dying VHS format. Being reissued later on DVD, it is a headscratcher why Roadrunner Records didn’t bother with chapters for each segment. This would have made the disc more interesting and functional in the long run. As it exists today it a half-hearted and corner-cutting attempt to squeeze more money out of the band’s existing fanbase.

The segment opens with the encore songs of the Donington show, which is a bit puzzling. Sure, it was a memorable show with relatively high production values and stage design, plus when the band destroyed their instruments at the end, it made for a memorable finale. However, the Donington show was filmed in its entirety, and while it can be argued that not all footage is of the desired quality. An abbreviated cut of this show could have made everybody happy. Now we just are left with a Motörhead cover, a quick Titas cover rendition and the band’s destruction of the stage. All in all fairly pointless and inconsequential stuff considering the wealth of material present in the band’s personal archives. It isn’t representative for Sepultura, or its discography and actually shortsells them in many ways. The opening section sets the tone for the rest of the documentary: corners are cut, history is selectively ignored and subjects that could have added some substance are only mentioned in passing. “Third World Chaos” simply doesn’t do the band the justice it deserved. “Chaos AD” might have been the band’s creative death certificate, even they didn’t deserve a limp eulogy like this.

As Sepultura was a formidable live act you’d be hardpressed to actually notice that from this DVD. There’s no unedited, full-blown live recording to be found here, but truncated edits of the group’s show at Donington, UK in 1994. Granted, the recordings of that Donington show weren’t exactly stellar, but to edit it down to merely a Motörhead and Titas cover is just selling the band short. The show focused heavily on “Chaos AD”, arguably Sepultura’s most enduring and popular but creatively empty record – but it did contain it fair share of early classics. The same could be said of the band’s appearance at Finland’s Giants Of Rock from 1991, which is only briefly mentioned in archive footage of the “Arise” period. Overall, there was a wealth of live footage to mine from, and Roadrunner decided to go for this pseudo-documentary and promo video compilation instead? Why? Granted the DVD, especially the “Third World Chaos” segment, is an easy view. Mostly because it never dwells on any given subject for an extended period of time. Which is positive for more casual fans of the band, but leaves long-time supporters on their hunger. Nothing is explored beyond the superficial (very fitting for the dreadful “Chaos AD” era, and what it stood for), and the most interesting eras of the band’s history are skipped over for easy entertainment and uninteresting backstage footage.

It is also completely selectively blind to the band’s early history. Early lead guitarist Jairo Guedz Braga is only briefly mentioned in one of the many interview soundbytes, and there are no mentions of original singer Wagner Lamournier, or session keyboardist Henrique Portugal. The entire early history of the band is in fact skipped over. It would have been interesting to see home video material from the “Bestial Devastation”, “Morbid Visions” and “Schizophrenia” days. Even if it was only a crude rehearsal, outtakes from the band’s early local shows or interviews with early supporters and former band members. None of this is present. A segment about the recordings of “Beneath the Remains” and especially “Arise” (when the band holed up in death metal mecca Morrisound in Tampa, Florida) could have added such tremendous depth to this shallow money-grabbing exercise. Neither of these are accounted for, and only mentioned in passing. Everybody knows that Sepultura were one of the most potent death/thrash units of their day. As the ‘90s set in change was inevitable for the Brazilians. Largely abandoning their riff-based thrash formula of old, “Chaos AD” heralded an era of musical simplification and a reliance on groove. We’ll never known what transpired within the band to initiate such a dramatic turnover in style, but it was successful at least financially for the band, who now played bigger touring slots and festivals. Popularity and musical merit aren’t to be conflated, or considered equal.

The third and final “We Are What We Are” segment is culled from the then-new “Roots” period and its subsequent fallout. It compiles the band’s three music videos that were shot to promote the album. All three are interesting in their own ways, especially ‘Rattamahatta’. Not so much musically, but for the fact that it was the band’s only foray into stop-motion animation. The segment is incredibly short, with a fairly pointless introduction by the band after which all three videos follow back to back. The album is its own brand of awful, and the promotional videos show the band’s further regression into mediocrity and irrelevance. That the band imploded at the height of its commercial success is a reminder that even the most promising of bands can falter dramatically.

In all “Chaos DVD” is indeed chaotic (and not in a good way). It is an unorganized mess of a compilation, of which only the “Under Siege (Live in Barcelona)” part is worth repeated viewings. The remainder of it is crudely sewn together cuts of brief interview bits, backstage footage and the occasional festival recording. In between those the band’s promotional clips are strewn in order to give it some semblance of coherence and chronology. On its face it appears to be a fan-package, but on closer inspection it is anything but. It is shallow and superficial mess that focuses on unimportant trivialities and ignores the impact and importance, both domestic and abroad, of the band’s pre-“Chaos AD” era. This shouldn’t come as a surprise as Roadrunner Records was clearing its artist roster of its commendable death metal past around this time to welcome the widely (and rightly) despised nu-metal movement. Few of the older bands were to remain with the imprint, most notably Fear Factory, Machine Head and Sepultura were able to keep their contracts – but at a severe cost. “Chaos DVD” is an epitaph for both band and label as each would go through its own set of changes. It’s functional for what it is, but hardly commendable for anybody looking for substance and worthwhile content.