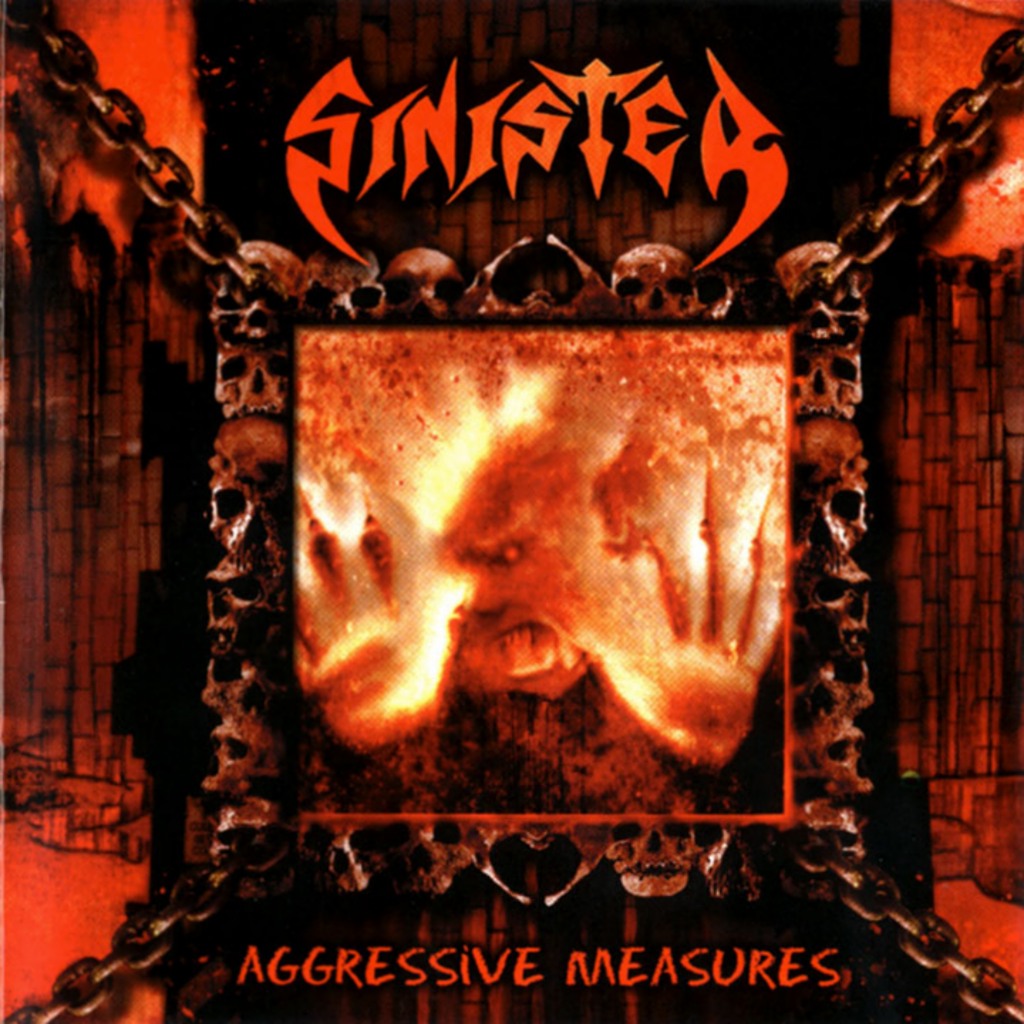 And so the time had come for Sinister to adapt itself to a rapidly changing scene that had no real need for it anymore. This record came to us in 1998 by which time Krisiun had appeared on the scene, Behemoth had released “Pandemonic Incantations” and Suffocation released its swansong EP “Depise the Sun” – blast-death was where it was at. Given the choice to adapt or perish, Sinister transformed its typical death metal sound to fit the changing musical trends. It still is undeniably Sinister in the ways that matter most, but a good deal of the time it sounds like a band trying too hard to be Suffocation…

At the helm of this revised version of Sinister was vocalist Eric de Windt, and his vocals are quite similar to those of original frontman Mike van Mastrigt. The only real notable difference is that de Windt’s grunts are far less deep. Aad Kloosterwaard does his best Dave Culross impression, and the nervous, choppy and crawly riffing takes equal inspiration from Suffocation this time around. Alex Paul provides bass guitar, but he is felt more often than he is actually heard. On all fronts “Aggressive Measures” sounds like a band desperately wanting to stay revelant, but only partly succeeding. By abandoning the style that made them the force they were, the band excises their only identifiable trait and replaces it with a sound countless of other acts around the world were doing.

The biggest stylistic departure is just how mechanical this record tends to sound. Whereas earlier Sinister records found an equilibrium between blasting fury and creepy midtempo dirges “Aggressive Measures” aggressively removes the band’s past template in favor for the taste-of-the-day, and the results are mixed at best. This is still Sinister at heart, nobody is able to replicate the band’s signature melodies or Aad’s weirdly unconventional drum patterns, but all else screams Suffocation worship. The bass guitar, once a focal point in the band’s writing, here is relegated to a mere supporting role. For a band once so proud to carve out its own sound, this certainly sounds timid and docile. It begs the question why the band decided to overhaul its sound quite so drastically. Kloosterwaard surrounds himself with capable musicians, but his influence can only have been minimal, as this sounds nothing like the Sinister of the previous three albums.

That isn’t to say that “Aggressive Measures” doesn’t have it share of signature tracks. ‘Beyond the Superstition’ and ‘Chained In Reality’ are probably the best this record has to offer, and the most clear in the Suffocation worship. There isn’t anything really wrong with the record, other than it being an imitation of something better, something more poignant. It is understandable why Sinister decided to go for this route. Suffocation released the “Despite the Sun” EP, their swansong. Krisiun (from Brazil) was making a name for itself in the underground, Diabolic released the utterly pummeling but derivative “Supreme Evil” and Morbid Angel released “Formulas Fatal to the Flesh”. The old death metal ideal was being left behind by its key players, and even second-tiers as Sinister felt the claws of irrelevance if they not kept up with the times.

The problem isn’t so much the Suffocation influence, but that it pushes out what made Sinister unique in the first place. All traditional Sinister components are still accounted for, yet their presence is minimized in favor of letting the Suffocation worship flourish. That isn’t bad in itself, but when people want to listen Suffocation they’ll grab one of their own records, and not this half-hearted, watered down stab at that particular sound. Other than that the Suffocation and Sinister elements feel out of place next to each other. The strength of Sinister was that it didn’t sound like the stereotypical Florida or New York band of the time. “Aggressive Measures” was a bid to get a footing in North America, and in the process Sinister betrayed its European fans. This is a confused record from a band that is suffering an incredibly obvious and painful identity crisis.

After recording three albums in Germany for the first time the band holed up at a studio in Holland. Excess Studio in Rotterdam was chosen for the session with the duo of Hans Pieters and Vincent Dijkers producing. The band envisioned to work with American artist Wes Benscoter. Alas they ended up working with Thomas Ewerhard as Benscoter was tied to other commitments at the time. In all “Aggressive Measures” took aggressive measures to modernize the Sinister sound for a newer and younger audience. It is a solid, but unremarkable record for a band that never really outshone any of its regional competitors in the same genre. If you ever wonder what New York death metal sounds like when produced by a few guys from Holland, this record is a good place to start.