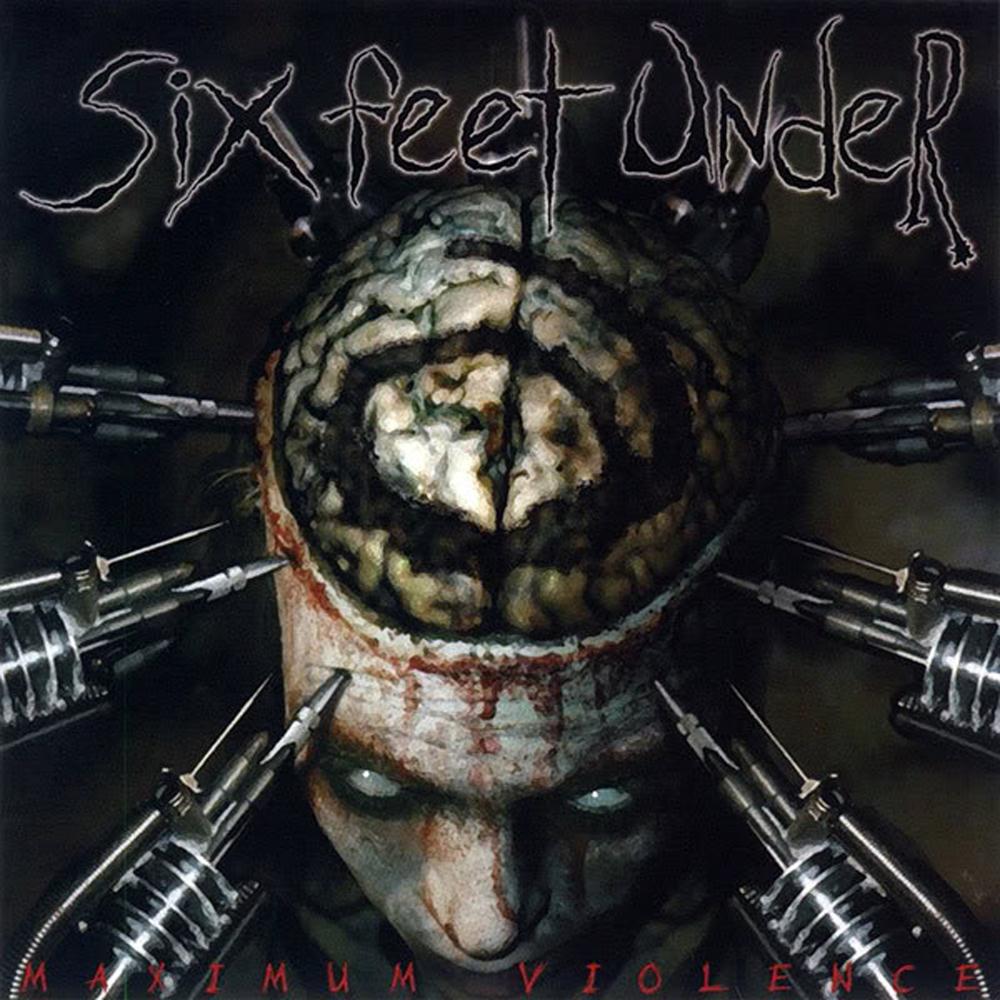 ‘In the dark of the night I search for the mindless wretches of society’ Barnes imparts solemnly in the ominous opening of “Maximum Violence”, ‘to drink of their blood and feast upon their flesh.’ Maybe third time is the charm for these Tampa, Florida knuckle-draggers? Maybe, just maybe they lifted themselves out of the creative morass they had submerged themselves in with Allen West? Maybe the presence of Steve Swanson led to the band actually raising an effort and writing the best possible material they could? All these questions and more will go through your head upon hearing those first few moments of ‘Feasting On the Blood Of the Insane’ – however brief it sounds as if Six Feet Under finally redeemed itself, and wrote something worthy of their collective legacy….

That is until Barnes start growling and grunting with a hiphop timbre and the admittedly strong doom opening is abandoned for more of the usual fare, the thing we have all come to loathe this band for: redneck grooves, one chord/one riff songs and baseless hard rock pandering of the poorest kind.  So, here we are another two years later from the wretched “Warpath”, and no lesson was learnt – because outside of vastly improved production values this record sounds almost identical to the one that came before. Almost identical, emphasis mine – because Allen West is no longer in the band, and instead of sounding like a low rent Obituary knock-off Six Feet Under now sounds like a low rent Massacre knock-off. If it feels like you find yourself jumping from the frying pan into fire, don’t worry – because that is exactly what is happening here. 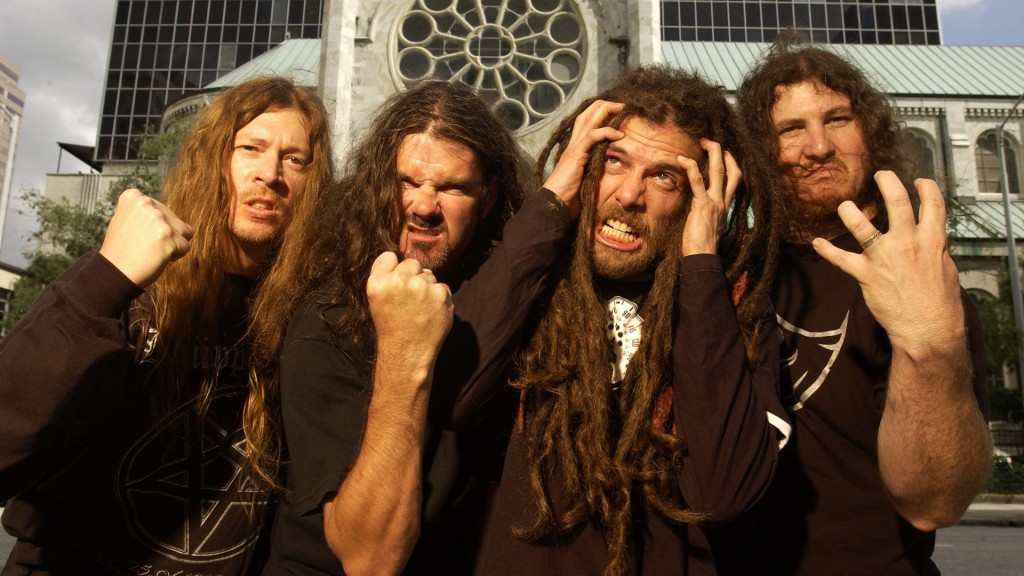 I honestly don’t know where to begin. Outside of a more powerful and spirited vocal performance by the has-been that is Chris Barnes, there’s little about this record to write home about. In part it is a return to the form of “Haunted”, but the remaining parts are still lacking as they have always been. Swanson in his writing and recording debut doesn’t make a complete fool of himself, and while the layman will have a hard time telling his riffs apart from those of former axe man Allen West, the material on display is still the same chugging stuff that was outdated by the time “Warpath” rolled out of the studio. Somehow there must have been audience for this because “Maximum Violence” is on all aspects a more expensive and ambitious undertaking than the preceding album.

Lacking is what this album mostly does, because when you break it down into individual pieces it isn’t all that good. Most obvious bone of contention is the riffing. Yes, the riffing. Not because the riffing is bad in itself, far from it. But to hear the same three basic riffs used in varying degrees and with little difference between them for the length of an album tends to grate on the nerves. So does the bass guitar offer some respite? No, Terry Butler is just being Terry Butler. If there are riffs to double he will do so unequivocally and without a moment’s hesitation. Greg Gall, the least talented member of this unit, continues to hammer away with typical hard rock beats, and offers nothing of note. It boggles the mind for how long these guys were able to get away with the obvious scam they were pulling with their band. Why does this band have fans – can somebody answer that truthfully without going into excuses or throwing insults? I’d love to hear it.

Notable is that “Maximum Violence” sounds absolutely massive with an organic warmth and crunch so often missing from death metal productions in the contemporary era. The record gives a new meaning to low-end heaviness and bass-oriented production work. Chris Carroll outdid himself with his outstanding production on a band that absolutely does not deserve the kind of gloss, smoothness and sheen he has provided this record with. The Paul Booth cover artwork is also the best the band has had since those bright early days of “Haunted” and the cheap cover photo of “Warpath”. It was 1999 and traditional death metal was considered dead due to rising prominence of (symfo) black metal and the emerging nu-metal movement that was to break loose at any point.  On the other end of the genre bands from Europe and South America were pushing the envelope in terms of velocity and speed. No wonder this record sold like hotcakes – because when you listened to stuff like this and suddenly Krisiun came from Brazil with its brazenly blast-focused and truly savage death metal. No wonder all the tobacco chewers, the basement-dwelling halfwits and stinky truckers embraced this band.

What is exactly the problem with this band? There’s nothing wrong with going for the simplest form of the genre. Death metal when played groovy and primitive can be a truly amazing thing. Just think of Bolt Thrower, Gorefest, Jungle Rot, Obituary and although Obituary jumped the shark in the ‘90s, the very idea of chunky groovy death metal isn’t that bad. Six Feet Under, despite the level of talent and influence involved, are the absolute worst and bottom-feeding example of the form. It is therefore not unreasonable for the band’s most visible spokesperson, mister Chris Barnes, to bear the brunt for his band’s continual missteps. Why it would take until 2011 to get rid of his unit’s least talented members is a question for the ages.

“Maximum Violence” sounds, for better or worse, like Massacre attempting to write an Obituary record with Barnes growling on top. To wit, Massacre’s only album of note “From Beyond” was a whitewash of Death’s “Leprosy” – and despite its historical significance, the record isn’t very good, or memorable. That the label choose to focus on Swanson being "from Massacre" is also questionable. He had no hand, in writing or recording, 1991's "From Beyond", and only appeared at earliest on the "Provoked Accurser" single, itself a precursor of the 1992 "Inhuman Condition" EP. More importantly however is that Steve Swanson was just the second guitarist in Massacre, and never its primary songwriter. That was Fred DeLillo (Rick Rozz) - which makes the promotional tooting all the more questionable, if you take a minute to let it sink in.

Obituary was only good for their first three records, and “World Demise” was redeemed only by the grace of two songs: ‘Don’t Care’ and ‘Final Thoughts’. Like its predecessor the running time and tracklist is artificially lengthened by including a number of classic rock covers that no person in the right mind asked for. The unfortunate few this time around are Kiss, Iron Maiden and Thin Lizzy depending on the version of this album you decide to pick up. The problem of the previous album is not rectified. The cover tracks are still better than this band’s original songs. Overall is that “Maximum Violence” is more of the same, but not better.