Skip to content
Somewhere in the four years in between “Seasons In the Abyss” and “Divine Intervention” something was lost within Slayer. For the first time the band had spent actual time on pre-production. Where Slayer once sounded irrevocably evil here they sound… mundane and ordinary. It is an unexpected and jarring change that left fans confused. The most evil thrash/speed metal band in the world had apparently lost its way, and much of its identity. This change becomes more apparent by the band’s change in wardrobe. Instead of wearing leather, inverted crosses, spikes and denim Slayer now wore hockey jerseys, sunglasses and tennis shoes as they opted for a more urban look. Kerry King shaved his head bald, and Slayer were desperately looking to hang with the kids that loved Pantera, Machine Head and the very divisive “Chaos AD” by once-relevant Brazilian combo Sepultura. Not even a divine intervention could save this “Divine Intervention”. 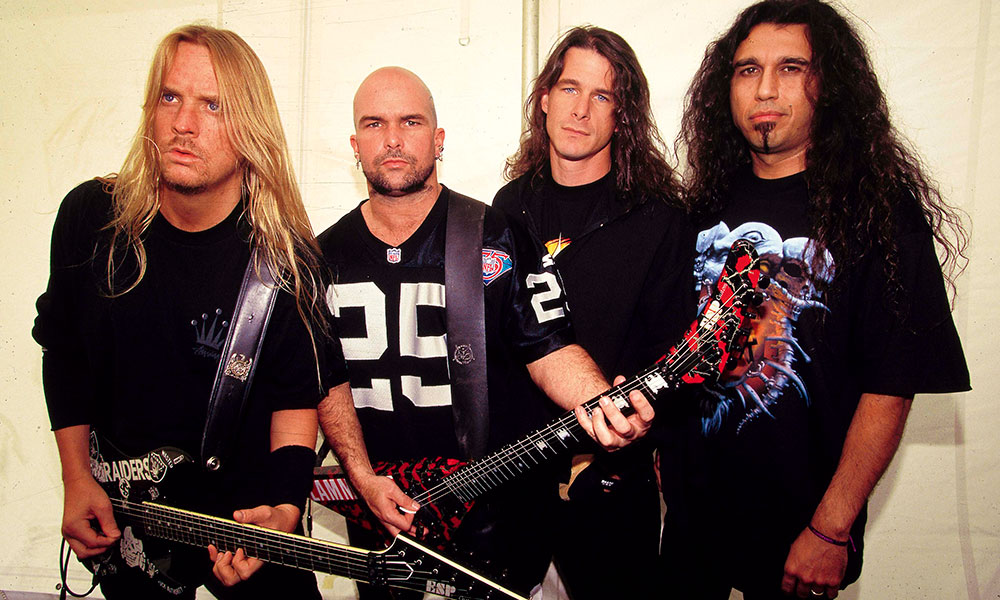 This album is the recording debut for drummer Paul Bostaph, who cut his teeth with fellow thrash metal pioneers Forbidden, and it is as smooth as one can reasonably imagine given the unfortunate circumstances of how he came into the band. In fact Bostaph’s take-no-prisoners attitude behind the kit is exactly what gives much of these fairly dull cuts their edge. The drum intro to ‘Killing Fields’ or ‘Serenity In Murder’ is equal to original drummer Dave Lombardo in terms of intensity and power. It is obvious that Paul Bostaph has a different style, and although he uses similar techniques as Lombardo this is a different Slayer. As the second longest-serving Slayer drummer the cards were stacked against Bostaph, but he didn’t let the animosity get to him. The band was grasping at straws to hang on to the sound they worked so hard on to perfect. In the face of a changing taste in the mainstream metal scene, and the apparent need to appeal to a different demographic in terms of audience, compromises were made – and not all for the best. Slayer was a full of itself, and over-confident that anything would work.

The album starts off strong with the rolling drumbeat and kickdrum action of ‘Killing Fields’. The track slows down soon, and Araya’s vocals are far more controlled than ever before. The riffing is kind of there, and it isn’t. These mostly are characterless groove riffs and stolen metallic hardcore riffs. Araya’s bass playing is more interesting than the riffs it supports, thankfully the killer acceleration redeems a lot. As always, the solo’ing is the highlight of the track, and it is no different here. ‘Sex. Murder. Art.’ sounds like a surprise ending to the opening track, but is actually a song on its own despite being barely over 2 minutes long. ‘Fictional Reality’ passes by without a highlight to speak of, and ‘Dittohead’ is another explosive short song that is so energetic that it is hard to miss. The ‘Dittohead’ music video has Slayer playing in a crowded basement, and it is filled with news footage. ‘Serenity In Murder’ is much more colorful on all fronts, and has some minor production values worth mentioning. The band appears to be playing in a deeply red colored stripper booth, of all things. Bostaph’s drumming matches Lombardo’s rhythmic density, but doesn’t possess the same creativity in terms of fills. The title track is a dull groove number that starts with the most enunthusiastic opening riff imagineable. Was this the same Slayer that penned “Reign In Blood”? You wouldn’t say so from hearing this slugfest of two-note groove riffs and directionless plodding.

‘Circle Of Beliefs’ is a good track ruined by processed vocals, which thankfully are abandoned after the first verse but return later on. As always the solo’ing is superb. ‘SS-3’ is, like the title track, inspired in equal amounts by the rising groove metal – and Seattle grunge sound, and it is none the better for it. Bostaph’s spirited drumming is a plus, but it does little to elevate a track hampered by subpar riffing.  The studio experiments with the vocals don’t help matters in the slightest. ‘Serenity In Murder’ is another short blaster that gets by on the grace of its abundant energy in the opening section, and the fact that it was a video track. The clean vocals in the beginning are nothing short of embarrassing, and if it weren’t for the great solo’ing this would be another throwaway track on an album that wasn’t strong to begin with. ‘213’ has a clean guitar introduction, and has the construction and feel of a power-ballad initially. There are more semi-clean and spoken vocals towards the latter half of the track. Closing track ‘Mind Control’ is pretty similar to ‘Killing Fields’ but it passes by without any real highlight to speak of. The drumming and solo’ing are great, but that’s about it. As a closing track it is anticlimactic and uneventful compared to earlier Slayer records.

Instead of churning evil thrash/speed metal riffs there are a lot of meandering groove metal riffs that borrow from the metallic hardcore sound that was all the rage at the time. The overall tempo is lower, but there are a good variety of slow and fast songs. Tom Araya’s vocals are toned down, and there’s a greater reliance on softer vocal cadences to fit the lower tempo. Araya doesn’t sound as out-of-control as on prior records. “Divine Intervention” follows the architectural template of “Seasons Of the Abyss” but misses the vital songwriting components to make it match its illustrious predecessor. The band has grown into a comfortable state of familiarity with its style. As a result of this, they have become complacent and content with itself. “Divine Intervention” shows no progress in terms of songwriting or instrumental skill from prior records, but seems to tread water in a confusing spot that isn’t here nor there. It does what it is supposed to do, but its goals aren’t set exactly high in the first place.

As per usual the album was steeped in controversy with ‘213’ referring to the apartment number where notorious cannibal/serial killer Jeffrey Dahmer tortured his victims, ‘SS-3’ concerned SS-hangman Reinhard Heydrich and ‘Dittohead’ formed a partial tribute to Republican fearmonger Rush Limbaugh. In 1998 the album was banned in Germany due to the lyrics of ‘SS-3’, ‘Circle of Beliefs’, ‘Serenity in Murder’, ‘213’ and ‘Mind Control’. The fascination with World War II and Nazi Germany previously got the band steeped in controversy with ‘Angel Of Death’ off of “Reign In Blood”, yet here the band unphased continue to draw from that black page in history. This is unsurprising as lead guitarist Jeff Hanneman is a collector Nazi war medals and memorabilia. Further media attention came from the Sepultura-Slayer feud after Max Cavalera accused Slayer of attracting neo-nazis and skinheads. Slayer replied by calling Sepultura “low life cocksuckers”. At least the record was partly redeemed by the amazing artwork of Wes Benscoter and the inlay that featured the bloody, logo carved arm of a particular obsessed fan of the band.

Infamous for its troublesome production that saw the band switch studios and producers multiple times during the sessions, it is the recording debut for long suffering San Francisco drummer Paul Bostaph.  The sessions were tracked at Ocean Way Recording in Hollywood, California and Sound City Studio in Van Nuys, California. It is a mixed bag of a number of truly good songs, two all too short singles and a bunch of songs that appear to be written to cater to a certain crowd rather than what the band wanted to write. It is a haphazard and confused record that can’t decide what it wants to be. Written equally between King and Hanneman, it is King’s material that defines this record. King’s confused writing and desperate appeasing to the groove - and grunge crowds is a signpost for the band’s future decline into mallcore wiggerdom and irrelevance. Slayer did not escape the fate that swallowed Metallica whole. “Divine Intervention” saw Slayer coping with the 90s, and undecided whether to stay loyal to their original sound/concept, or molding it to fit the then-current popular taste. As it turns out the album does a bit of both, but it is mostly remembered as the death certificate for the once unchampioned masters of extreme thrash – and speed metal.