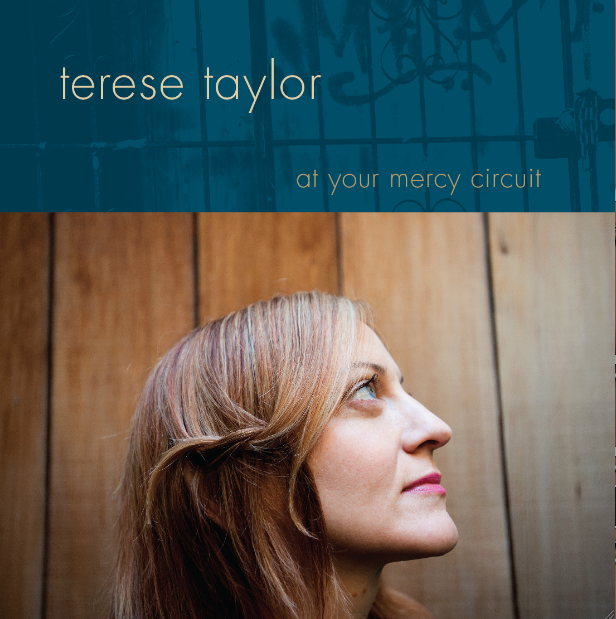 Terese Taylor is a singer/songwriter based out of her adopted home of San Francisco. Since 1999 she has been building a following in North America, and she has released three albums (in 1999, 2003, and 2006) prior to arriving at “At Your Mercy Circuit”. All of her hard work hasn’t yet translated into any mainstream success, which partly can be subscribed due to her indie – and alternative music background - and the fact that singer/songwriter music has never been in vogue in the mainstream popular music consciousness. That doesn’t change the fact that “At Your Mercy Circuit” is a wonderful, and sometimes quirky, rock record that appeals to both ends of the spectrum. It has something for those who appreciate introspective, minimal music - and those who love female-fronted rock albums. It is a time capsule back into the 90s when strong females ruled the airwaves, and the album charts in both the United States and Europe.

The album is mainly a record that is based around Taylor’s almost conversational vocals. These vocals sometimes make Terese appear unconfident or unsure of herself, her own voice, and the style that she has chosen. The setup is minimal with only a guitar, percussion and Taylor’s voice to guide the listener through the album. In a superficial manner, “At Your Mercy Circuit” is reminiscent of a decidedly unpoppy variation of what Sheryl Crow, Paula Cole, Jewel and Alanis Morissette did during the 1990s. The foundation for the record is to be found in the rock genre, even though the rock aspect is peripheral at best as Taylor’s quirky and biting lyrics and parlando vocals take centerstage. Most of Taylor’s songs are quite introspective, gloomy and not really hook oriented. It is a mostly slow record that is sometimes bluesy, and occasionally flirts with country. There are no excessive bells or whistles, and the roomy production emphasizes the nakedness and inwardness of Terese Taylor’s wonderful depressing rock songs. It is very similar to Jewel’s “Pieces Of You” that way, although the two are worlds apart in terms of vocals, lyrics and their general approach to songwriting.

‘Snow & Ravine’ is both bluesy, and slightly country (especially due to its rocking beat and usage of a violin). ‘His Own’ sounds almost improvised, especially vocally. ‘Jigsaw’ is almost grungy in its guitar work. ‘Folsom Street’ is a bluesy ballad, and ‘Drug Problem’ is a slow fragile rock song and both are easily the most obvious candidates for a potential single release treatment. ‘Folsom Street’ almost sounds like a discarded Norah Jones song circa “Come Away With Me”. That isn’t to say that the other tracks on the album aren’t worthy of your attention because they are – but these obviously stand out more. The record is fully committed to its niche, and even though it is probably a good deal more introspective and gloomy than what is usually expected in this genre, it works brilliantly within context. Even Terese’s conversational vocals get stronger and more nuanced as the record progresses, even though she’s as far away from a conventional pop singer or singer/songwriter as you could probably imagine. Her voice would work wonderfully in an alternative – or a Seattle grunge rock band as Elastica. The minimal nature of the songwriting and instrumentation greatly enhance the emotional resonance of the songs, as the listener can really focus on Taylor’s voice and lyrics – and isn’t constantly distracted by vocal acrobatics, instrumental fireworks or studio trickery.

The greatest strength of “At Your Mercy Circuit” is its disarming honesty, and that it delivers just that what it promises. Terese’s vocals might not instantly appeal to the listener, but once having absorbed the record over a number of listens – its simplicity and honesty reveal the enduring power of its central songwriting axis. Less is always more, and Taylor and her backing musicians understand this better than most. Nothing about this record is excessive, and overindulgent in any way, and that makes the effort all the more powerful. The album remains at a steady midpace, and occasionally the band will rock out (as on ‘Doesn’t Shine’, which also has some truly spectacular bass licks) – but that only seldomly happens, and the record mainstains its pondering, pensive pace for the majority of the album's running time. There aren’t any major hiccups or shortcomings, other than it is a record you need to be in the mood for. That’s the only drawback this record has for people who like their rock music more upbeat and light-hearted. Terese Taylor’s lyrics are wonderful explorations of the human condition, love and relationships.

Terese wrote the record in collaboration with Klaus Flouride of legendary California punk rock/hardcore pioneers The Dead Kennedys, which is somewhat of an odd pairing – but the results speak for themselves on this record. On “At Your Mercy Circuit” she is backed up by an all-star cast of musicians of various caliber, such as James Whiton (double bass, Tom Waits), Will Hendricks (bass, Eleni Mandell, Califone), Garrin Benfield (lead guitars, Andrew Bird), violinist/cellist duo Teddy Rankin-Parker & Kristina Dutton (Glen Hansard, Iron & Wine) and Patrick O'Heffernan of 'Friday Night Live' fame. The album is imbued with an alternative spirit, and although the format is as mainstream as they come, “At Your Mercy Circuit” isn’t your typical singer/songwriter record. Terese Taylor is too quirky to conform to the limiting conventions of that genre. The appeal of the record lies in the fact that it uses the tropes of the singer/songwriter genre, and goes off to the dark side with them. This isn’t some syrupy, saccharine record about infatuation, love – but an introspective examination of the toxic nature of relationships. As such it is different from the majority of what is released normally in this genre, and “At Your Mercy Circuit” is so much better for it.