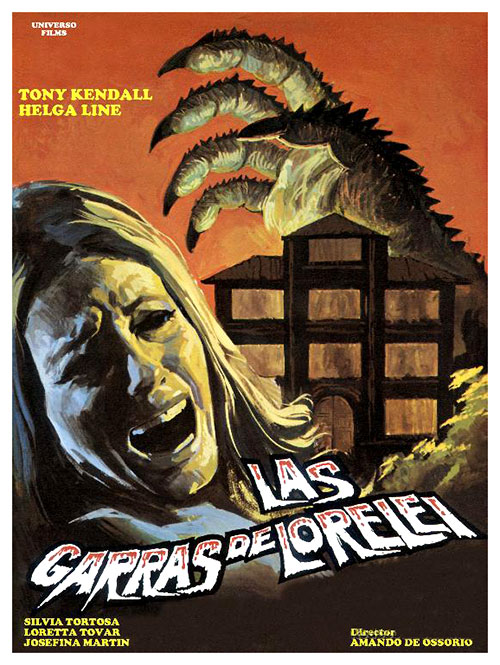 Before Spanish director Amando de Ossorio cemented his cinematic immortality with the lauded Blind Dead franchise, a series of highly atmospheric zombie movies, he was responsible for a number of respectable genre offerings. In 1969 he directed Malenka (released internationally as Fangs Of the Living Dead) and in 1974, just before the directing the final installment of his flagship franchise, he wrote and directed The Loreleys Grasp. Las Garras de Lorelei is an overlooked and little known entry into the director’s modest filmography, and whose other body of work is often ignored in favor of his more known Blind Dead franchise. 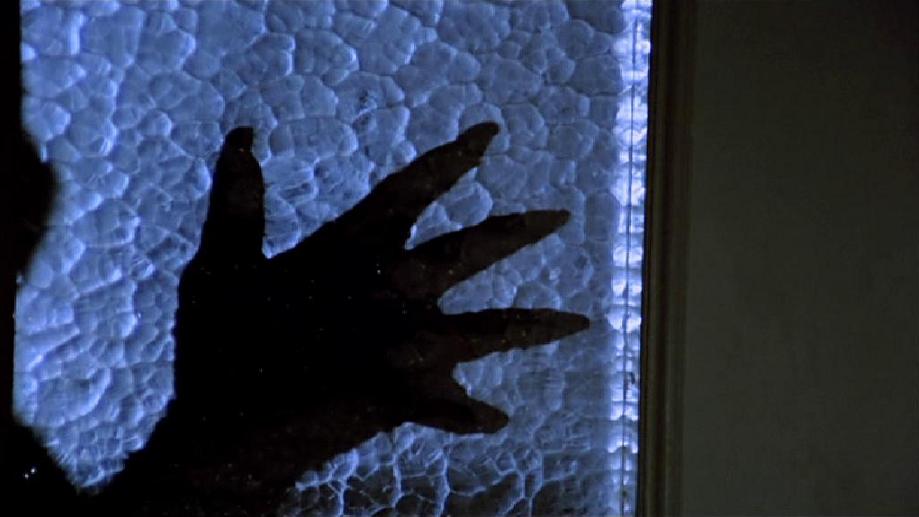 Las Garras de Lorelei was distributed internationally, somewhat haphazardly, as The Loreleys Grasp while the Claws of the Loreley is closer to the original Spanish title. In The Loreleys Grasp every fullmoon night Lorelei transforms into her scaly, reptile form, tearing out the hearts of victims, female and male alike. The movie is a delicate balancing act between fast-paced bloody kill scenes and slow-burning, tension building atmospheric sections. It was released in the US as the nonsensically titled When the Screaming Stops that insultingly tried to pass it off as, of all things, a slasher movie. Rising above budgetary limitations and stilted dialog is the likeable cast of Tony Kendall, the delectable duo Helga Liné, and Silvia Tortosa, along with exploitation regulars Luis Barboo, Luis Induni, and Betsabé Ruiz. 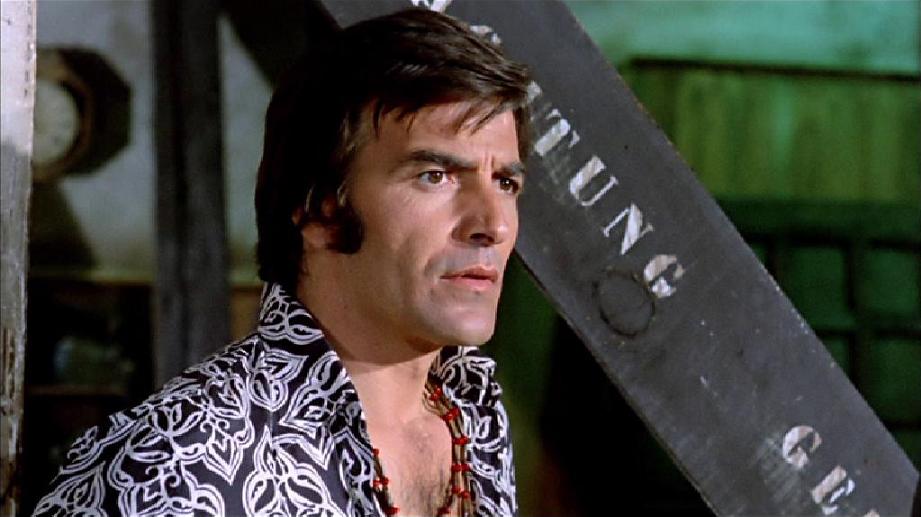 Leading man Tony Kendall had starred in a number of Eurocrime, spaghetti westerns and horror movies before appearing in The Loreleys Grasp. Prior to starring in The Loreleys Grasp, Helga Liné was an experienced horror veteran at this point, having starred in Nightmare Castle (1965), Horror Express (1972), León Klimovsky’s The Dracula Saga (1973), and Terence Young’s campy peplum The Amazons (1973). Silvia Tortosa had done mostly TV work before her appearance in Horror Express (1972). Helga Liné, who has the same seductive pale complexion here as she had in the delirious The Dracula Saga, spents much of her screentime in the skimpiest of outfits. Betsabé Ruiz, appearing only in a pre-title cameo as a bride, was in The Wolfman vs the Vampire Woman (1971), Return Of the Blind Dead (1973), Horror Rises From the Tomb (1973), and The Dracula Saga (1973). Many of the shocks, if there are any to be had, come from the economic and efficient practical effects. The scaly monster suit - which bears some resemblance to the Gill-Man from the classic Creature From the Black Lagoon (1954) - is obviously rubbery, but sufficiently scary when obscured in shadow. The head, despite being cloaked, is unintentionally funny-looking and less than monstrous no matter from which angle it is shot. At its core The Loreleys Grasp is more of a tragically romantic love story than a horror, all overlaid with a Germanic folkloric concept. 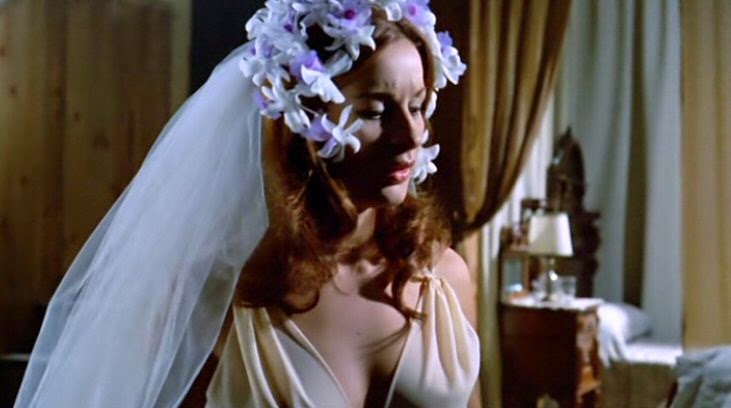 The Loreleys Grasp is set in an unspecified German town near the Rhine where everybody inexplicably speaks English. Sigurd (Luciano Stella, as Tony Kendall), a hunter described as a man who has “a great deal of experience!”, is set on the case when a young bride-to-be (Betsabé Ruiz) is bloodily killed. In a nearby tavern the Mayor (Luis Induni) tries to keep the story under wraps, while a blind Hungarian violinist (Francisco Nieto) will tell the legend of Lorelei to anybody willing to listen, including the tavern patrons. As these things tend to go none of the murders instigate a police investigation. Nor does the Mayor want any kind of attention from authorities despite the inexplicable nature of the slayings. Teacher Elke Ackerman (Silvia Tortosa), who boarding school director (Josefina Jartin) insists on calling “elle-key” instead of Elke, instructs the ruggedly handsome Sigurd, much to the delight of the assorted students (each a racial stereotype of themselves), to guard the premises. 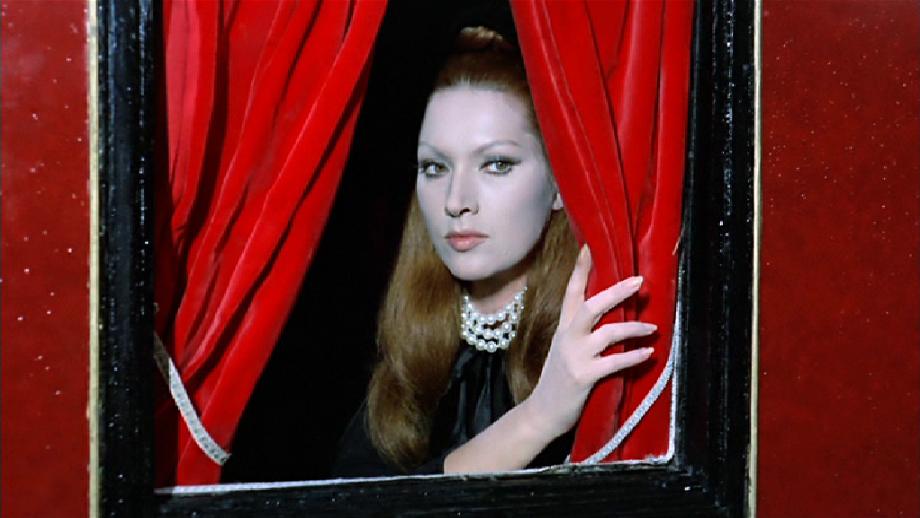 Sigurd spents much of his time skulking around the boarding school, visibly having a great time at the faculty as he’s flirting with the student body (all of whom have delectable bodies), making a pass on head mistress Elke Ackerman, and throwing longing looks at the enigmatic Lorelei. He, of course, fails to connect the dots when Lorelei mysteriously turns up near bodies of water, and bodies of recently-slaughtered victims. Lorelei, true to her folkloric origins, is a Siren. When he runs into Lorelei again he follows her to a derelict building. There, lying down in a mildly suggestive manner that emphasizes her curves while wearing minimal of fabric, she practically admits, mostly through deflecting answering his questions directly, that she’s the Loreley of legend. Sigurd is either too distracted by her lovely curves, or not the sharpest knife in the drawer, and fails to connect the dots. In the meantime Sigurd has apprehended Professor Von Lander (Ángel Menéndez) who fills him in on the origins and possible ways to defeat the mythological monstrous adversary. Interestingly, Lorelei doesn’t get a name until after claiming her fourth victim. 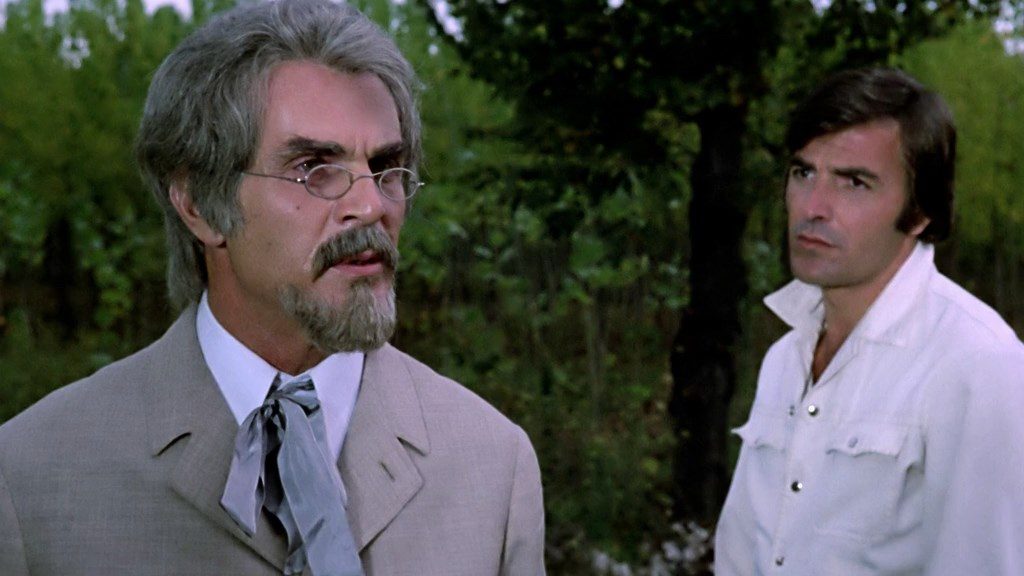 Once Sigurd has become romantically entangled with both Elke Ackerman and daytime Lorelei, he is motivated to do that what he was actually contracted for. A submarine investigation of a nearby lake leads to the discovery of Loreley’s underground lair. Loreley lives in a well-lit and ornately designed grotto, complete with bikini-clad servants, her trusty man-servant/bodyguard Alberic (Luis Barboo) and an opulent throne room. A nearby chamber holds the Rhinegold, vast treasure from Loreley’s father Wotan. When Sigurd emerges at the grotto’s entrance Alberic intones, “my lady awaits you!”. Three bikini-clad servant girls emerge from shadows closely behind, representing the Rhinemaidens protecting the gold. In the throne room Loreley informs Sigurd of her origins, and tries to sway him with her very skimpy bikini, or by hypnotizing him with a luminescent magic crystal. The intruder is brought deeper into the grotto's bowels, and chained to a wall by Alberic. Once bound Loreley’s three bikini-clad servants fight over who likes Sigurd the most. Their quarreling allows Sigurd ample time to figure out an escape. 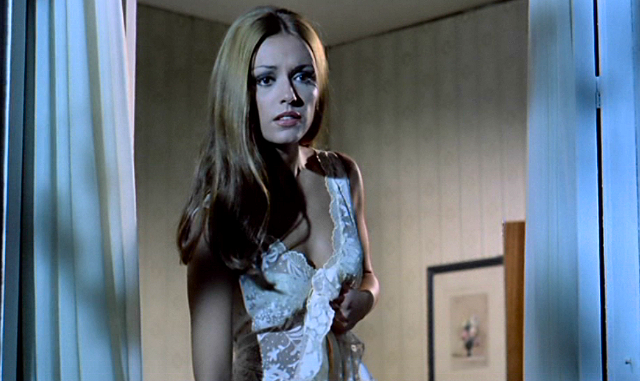 Of the two leading ladies Elke Ackerman starts out as a bun-haired, suit-wearing uptight headmistress but as the movie progresses she, quite literally, lets her hair down, as she longingly looks from her bedroom window at Sigurd and starts wandering aimlessly around outside in her nightgown. Ackerman, who in the third act addresses Sigurd as “Sirgurd” for some reason, becomes the requisite damsel-in-distress archetype when she’s abducted by Loreley. Not until it is too late does Sigurd realize that the bodacious Lorelei is the Loreley of folkloric legend. Things get murkier for Sigurd when he discovers that the object of his affection is the very same monstrous threat is he hired to kill. Sigurd is torn between his affection for day-time Loreley, and headmistress Elke Ackerman. Always the pragmatist, Sigurd rescues Elke from Loreley with Professor Von Lander’s dagger. This causes Lorelei to lose her nocturnal monster form. As her spirit form imposes, “we shall meet again in Valhalla! Sigurd, I’ll be waiting!” her corpse dissolves to smoldering remains soon after. With Lorelei waiting for him in the eternal halls of Valhalla, and Elke Ackerman as his present paramour, Sigurd reaps the most benefits of the situation. 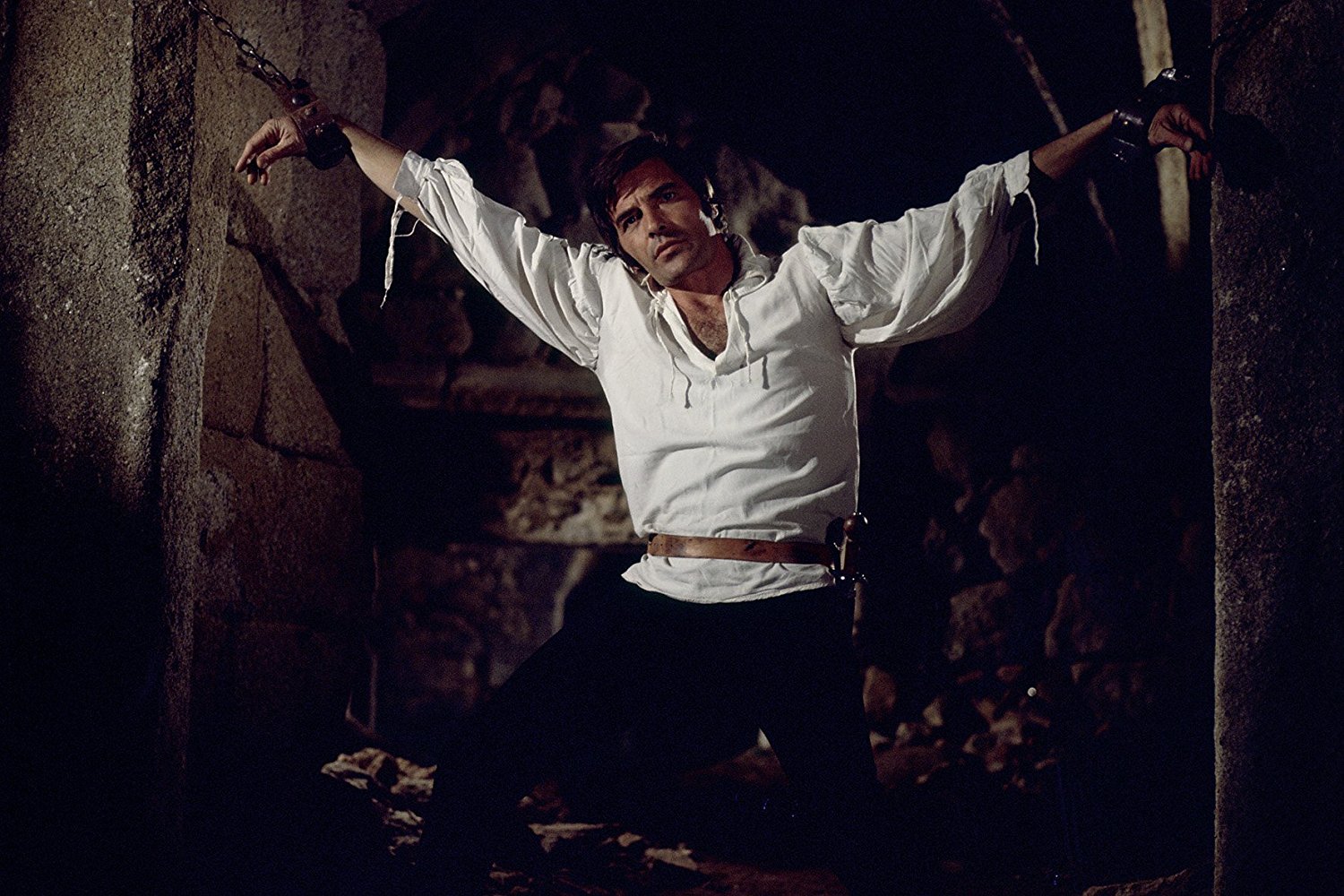 Central to The Loreleys Grasp is the Germanic folklore tale Godwi oder Das steinerne Bild der Mutter by Clemens Brentano. In 1824 the tale was reworked as the poem Die Lorelei by Heinrich Heine. It also is influenced by the four-part Richard Wagner opera Der Ring des Nibelungen. Filmed on location in El Carcán, Torrelodones, the river Alberche in Madrid, Spain and in Rhine, Germany The Loreleys Grasp offers atmosphere and spectacle in equal measure. For the time The Loreleys Grasp was suggestive and risqué (it never lowers itself to the sort of tactless smut that comprises much of output from Jesús Franco and Joe D'Amato alike) in its depiction of nudity and violence. Much of the nudity is implied rather than flat-out shown. When nudity does occur directly, it is part of a grotesquely violent and overly bloody kill scene. Like the Blind Dead movies before it The Loreleys Grasp is at strongest when its atmosphere is at its thickest. 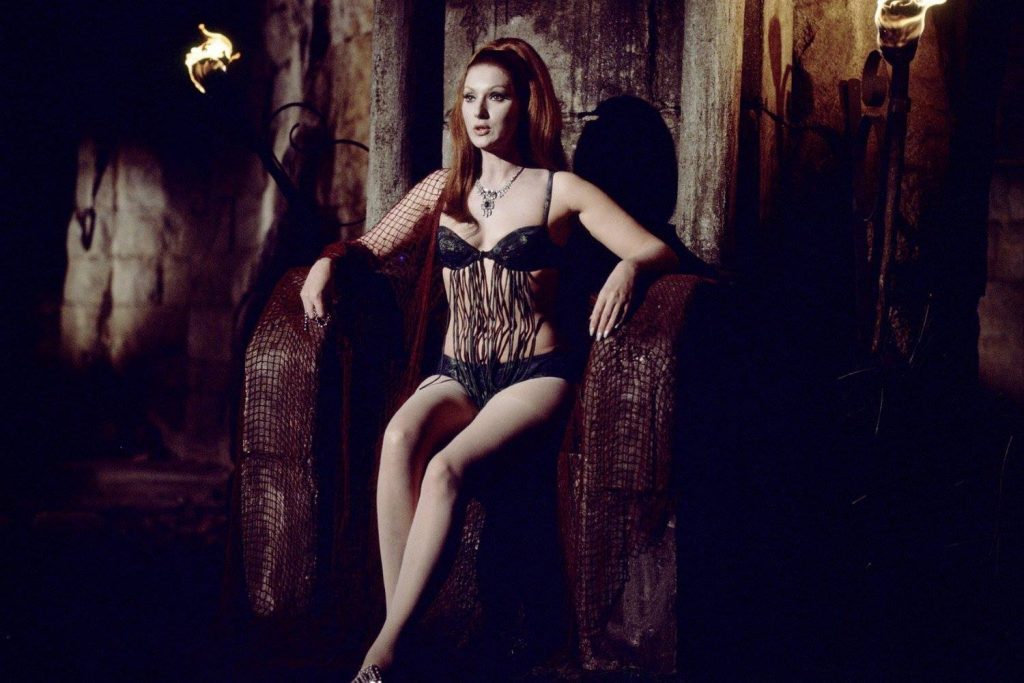 Among Spain’s horror directors the work of Amando de Ossorio isn’t quite as unhinged and haphazardly written as some offerings from stalwarts Paul Naschy, or León Klimovsky. Infusing a part of his filmography with mythical properties de Ossorio’s work for the most part tends to be high on atmosphere. What The Loreleys Grasp lacks in practical effects prowess is complemented by its lovely cast, and the somewhat tragic love story at its center. Both leading ladies excel at the parts they are given. Silvia Tortosa was magnificently cast as the initially uptight and demure Elke Ackerman. Helga Liné, in her dual role as the titular character, isn’t given a lot to do early on. Her introduction is only in brief glimpses, and completely bereft of dialog. Once the plot is set up Liné occupies herself by cavorting around lakeside marshes in the skimpiest of bikinis. The Loreleys Grasp is a movie that calls for a certain level of class of its leading man. Tony Kendall, a typical rugged and fearless 1970s man, was cut for the part – as he exudes the same kind of aristocratic sophistication as Ángel del Pozo, Miguel de la Riva, or Bill Curran. There truly is no better place to start exploring the world of Amando de Ossorio than The Loreleys Grasp. It has plenty of atmosphere, a monster, and a lovely cast.