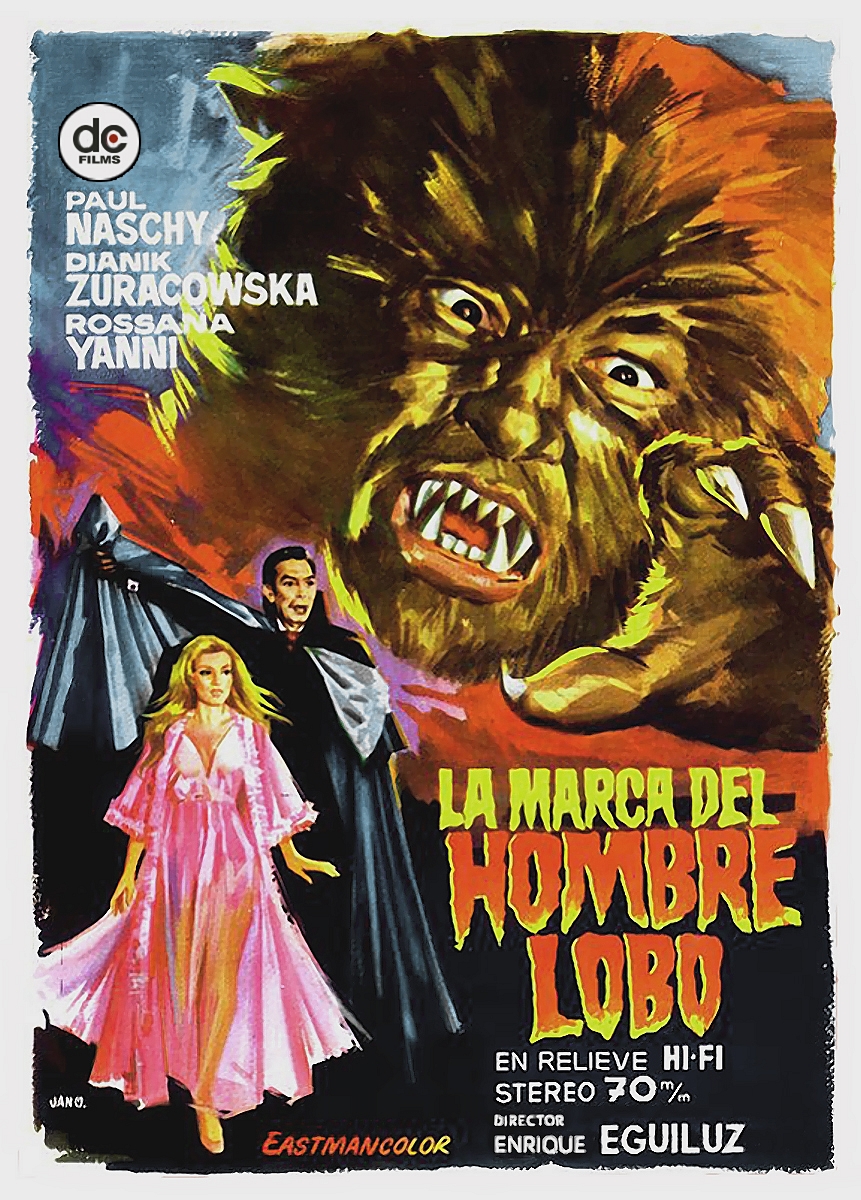 Plot: Polish nobleman is bitten by wolf during hunting expedition.

Jacinto Molina Álvarez was born in 1934, and thirty-four years later he was a champion weightlifter, former architect student, graphic designer, failed pulp western novelist, and occassional film extra. Álvarez came from a line of men with artistic inclinations. His father, Enrique, was a renowned fur and leather craftsman and Emilio, his grandfather, was an acclaimed sculptor of religious iconography. Álvarez wrote the screenplay in a month with inspiration coming from a feature he saw at a matinee when he was 11. He hoped for it to go in production, but in 1962 Spain chances were slim as the country had no horror cinema culture worthy of the name. The once almost respectable Jesús Franco had made a few attempts, but a fantastique and straight up horror were unheard of. A take on the classic Universal Monsters, or an escapist fantasy, was what Álvarez’ werewolf was envisioned as instead of some profound rumination on mortality or the human condition. The Mark Of the Wolfman - the first chapter in the epic, multi-decade spanning saga of cursed Polish nobleman Waldemar Daninsky - became a box office succes, making Paul Naschy a household name in his native Spain - and launched a lucrative franchise spawning no less than a whopping 11 sequels over multiple decades. 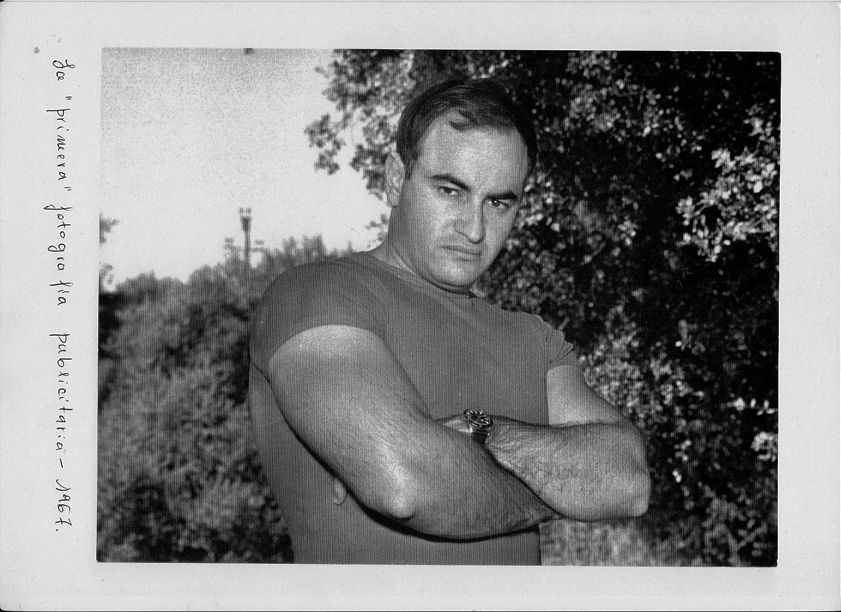 The road from conception to execution for The Mark Of the Wolfman was beset by troubles from all sides. The story was originally meant to be set in Spain, but the oppressive regime from Generalissimo Francisco Franco would ensure it would never find proper funding. Salvaging Álvarez’ fantastique from looming obscurity was West German production company Hi-Fi Stereo 70. The company initially approached faded icon Lon Chaney, Jr. to play the cursed nobleman, but advanced age and throat cancer forced him to politely decline. In view of the situation Álvarez would play the character himself. To accomodate the changes the nationality of the lead character was changed from Spanish to Polish. Hi-Fi Stereo 70 urged Álvarez to adopt a non-Spanish alias as an actor. Thus was born Paul Naschy; a portmanteau of then-current pope Paul the Sixth and Hungarian weightlifter Imre Nagy.

The alias allowed Alvarez to write screenplays under his own name and act under his international alias Paul Naschy. One of the directors offered the project was Amando de Ossorio who passed on it, believing that horror would never take off in Spain. Upon the box office success of The Mark Of the Wolfman de Ossorio would start his own horror productions with with gothic horror potboiler Fangs Of the Living Dead (1969), The Loreley’s Grasp (1974), The Night of the Sorcerers (1974) and the memorable Tombs Of the Blind Dead (1972), the Knight Templar zombie movie birthing the (mostly consistent) Blind Dead franchise. In 2001 Naschy was given Spain’s Gold Medal Award for Fine Arts by King Juan Carlos I.

Realizing Naschy’s werewolf screenplays were directors Enrique López Eguiluz, Carlos Aured, Javier Aguirre, Miguel Iglesias, and former Argentinian dentist León Klimovsky. Klimovsky would direct Naschy in The Werewolf and the Vampire Woman (1971). In the Enrique López Eguiluz directed The Mark Of the Wolfman, the first Waldemar Daninsky epic, Nashy attracted some of the most recognizable talent of the day, including Julián Ugarte, Ángel Menéndez, Carlos Casaravilla, Dyanik Zurakowska, and Rosanna Yanni. Argentine actress Rosanna Yanni would cross paths with Carlos Casaravilla and Julián Ugarte in Fangs Of the Living Dead (1969), with Naschy in The Hunchback Of the Rue Morgue (1973) and Count Dracula’s Great Love (1973). Yanni would be one of many continental belles to partake in the sports comedy Las Ibéricas F.C. (1971) as well as Terence Young’s breasts-and-games peplum spectacular The Amazons (1973). Antonio Jiménez Escribano was in Necrophagus (1971). Ángel Menéndez would play men of science in The Devil Came From Akasava (1971), an Eurocrime romp from Jess Franco, and in Amando de Ossorio’s The Loreley’s Grasp (1974). Dyanik Zurakowska and Aurora de Alba would co-star with Naschy again in the León Klimovsky directed Vengeance Of the Zombies (1973). The Mark Of the Wolfman was one of the last acting parts for Manuel Manzaneque, who would bid the acting profession farewell and become a respected wine maker in Spain. 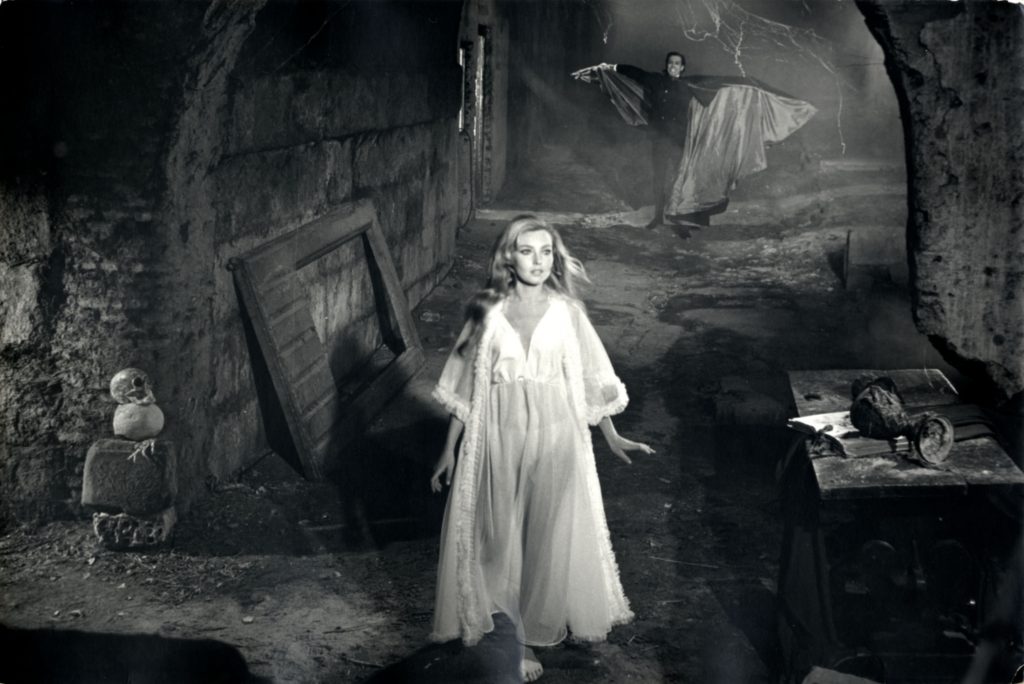 In The Mark Of the Wolfman Polish aristocrat Waldemar Daninsky (Jacinto Molina Álvarez, as Paul Naschy) finds himself attending a period-costumed masked ball at the estate of Count Sigmund von Aarenberg (José Nieto, as Jose Nieto) in Germany in honor of his daughter Janice (Dyanik Zurakowska, as Dianik Zurakowska) 18th birthday. Von Aarenberg wants her to marry her respectable friend Rudolph Weissmann (Manuel Manzaneque), son of judge Aarno Weismann (Carlos Casaravilla) whom he is friends with. After the prerequisite dance Janice is attracted to the diminutive Daninsky instead. Meanwhile a gypsy couple Gyogyo (Gualberto Galbán, as Gualberto Galban) and Nascha (Rosanna Yanni, as Rossana Yanni), whose horse-drawn caravan was driven off the road earlier by Weissmann, break and enter into the delapidated castle Wolfstein. Gorging on wine found in one of the cupboards the two drunken troublemakers, or the fairer half of them at least, desecrates one of the tombs by removing a silver cross.

Unbeknownst they have released long-dormant lycanthrope Imre Wolfstein from captivity and into the peaceful countryside nearby. As Wolfstein claims several victims among the populace a hunting party is mounted, led by forestkeeper Otto (Ángel Menéndez, as Angel Menendez). It is under these circumstances Daninsky and Weissmann make their acquaintance, with Daninsky killing the wolfman with a silver dagger – but not without sustaining serious injury himself during the altercation. In search of a cure he meets experts in the occult Dr. Janos Mikhelov (Julián Ugarte, as Julian Ugarte) and his beautiful assistant Wandessa (Aurora de Alba). As Daninsky comes to grips with his wolven affliction, Rudolph becomes enchanted with silky seductress Wandessa and Janice is instantly spellbound by the very metrosexual Janos Mikhelov. As these things tend to go Mikhelov and Wandessa have their own plans for Daninsky... 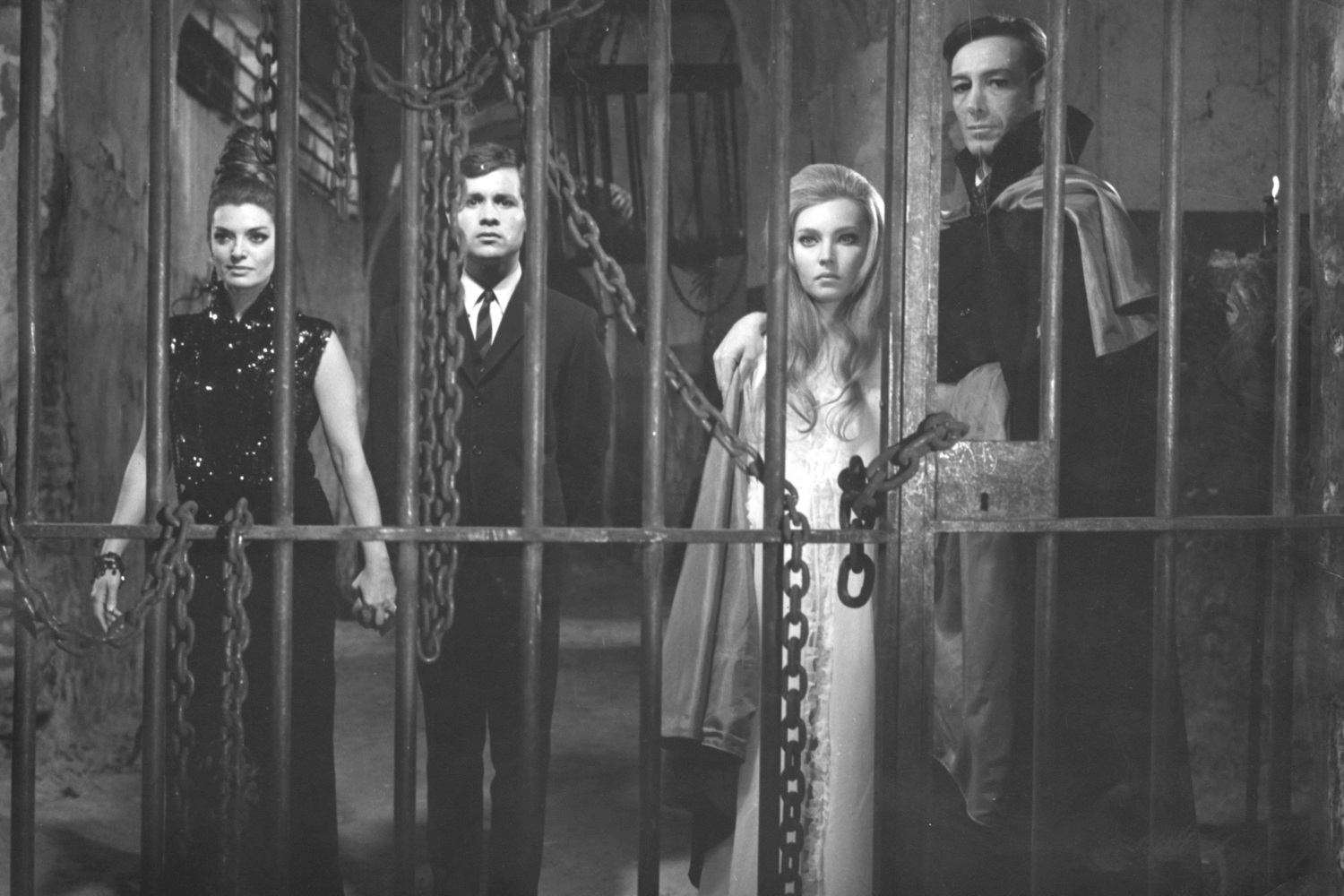 There's a sense of pathos to Daninsky that far outweighs Naschy's tendency to overcompensate in dramatic gesticulating and overcompensating for his lack of height. Dyanik Zurakowska, Rosanna Yanni, and Aurora de Alba steam up every scene they are in. Yanni, a former model in Italy and before that a chorus girl in her native Argentina, wields her most formidable weapon, which is her deep cleavage and heaving bosom. Zurakowska provides the necessary youthful exuberance and her attraction to the vertically-challenged Daninsky is as inexplicable as anything else. Neither Yanni nor Zurakowska were ever particularly shy about baring their bust if that was required. Aurora de Alba was the original Wandessa, and she would torture Daninksy again in The Werewolf and the Vampire Woman (1971), at which point Patty Shepard had taken on the role and again in The Werewolf and the Yeti (1975) where Silvia Solar inherited the part. Location shooting at the El Cercón Monastery in Madrid, later used in de Ossorio’s Tombs Of the Blind Dead (1972), lush usage of Mario Bava-esque colors (blue and red feature prominently), as well as shadowy, cobwebbed interiors, and earthen Spanish locations add tremendously to the production value. The Mark Of the Wolfman has all elements of a good Mediterranean European gothic horror venture.

As expected from a screenplay written in a month there's more than a few interesting creative choices made. First, the pitting of Waldemar Daninsky (who in a Hollywood script would be the bad guy) against a pair of well-preserved vampires. Julián Ugarte’s metrosexual Janos Mikhelov was several decades ahead of its time. It's an especially daring move on Naschy's part making Mikhelov a metrosexual as homosexuality was illegal in Spain in the 1970s. That Naschy wrote a few scenes of his character frolicking with Dyanik Zurakowska, and Aurora de Alba is everything you'd expect of a novice screenwriter, and who could honestly blame him? Rosanna Yanni and Dyanik Zurakowska were some of the most desirable actresses of the day and that both became stars in their own right speaks volumes. The inclusion of Rosanna Yanni is purely to raise the temperature even further and, as always, Yanni doesn’t disappoint. Well, Rosanna seldom disappoints. 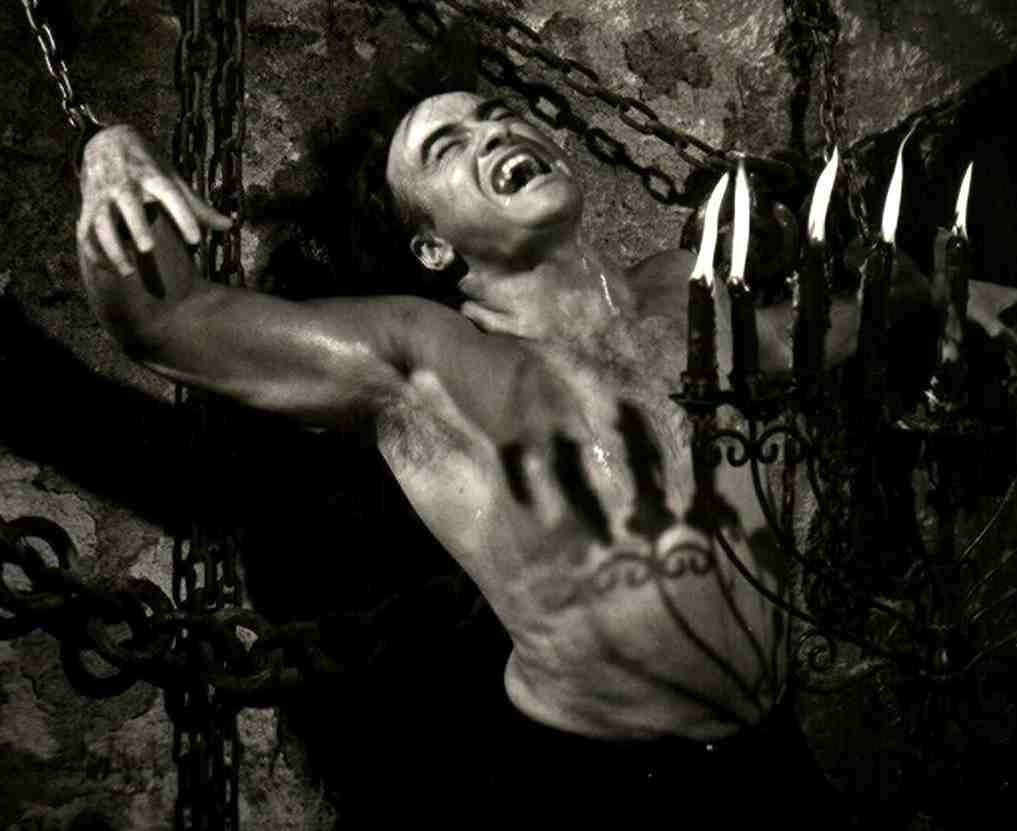 Compared to any of the later installments The Mark Of the Wolfman is conservative and restrained, which doesn’t mean it doesn’t go completely off the rails. A lycanthrope nobleman is beset by a pair of vampires while a young maiden and the fairer half of the vampire couple lust after him, one of them quite literally? Rosanna Yanni’s very low-cut dress inspires poetry and the dusty, cavernous locales give a delightfully old fashioned (as, say, something of a decade earlier) look that adds immensely to the authenticity. Barrel-chested Paul Naschy was never much of an actor but he displays the hunger you’d expect of a young actor starring/writing in his own vanity project. Daninsky would cross time zones and continents, face off against a variety of supernatural enemies to varying levels of success, and always have one (or more) buxom belles inexplicably drawn to his hairy masculine chest. The Mark Of the Wolfman has the distinction of being the first to introduce Waldemar Daninsky to the world and catapulting Paul Naschy to international cult superstardom. For all the criticisms that could be leveled at Jacinto Molina Álvarez as an actor, writer, producer, and director Iberian horror would have been a lot duller if it weren't for his presence...