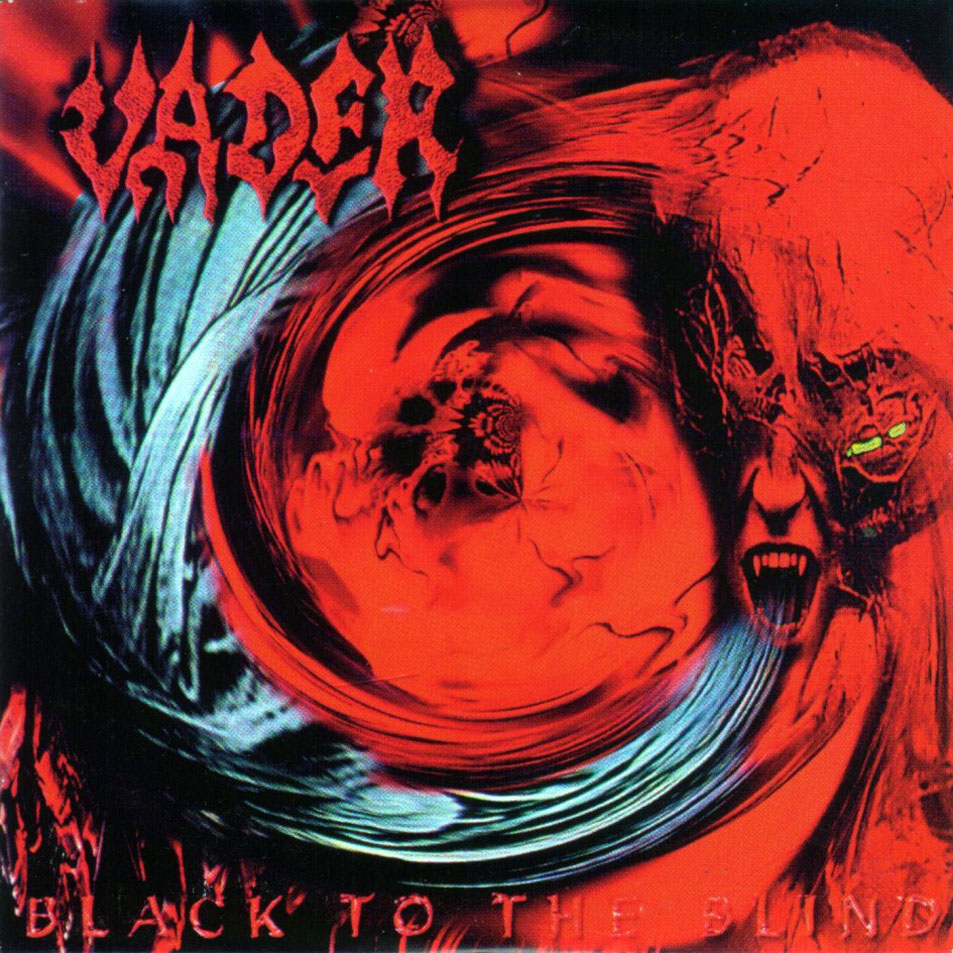 Often considered a black page in Vader’s early discography “Black To the Blind” not only is marred by a thin, substandard production – but it is also tucked within two veritable classics with “De Profundis” and “Litany”, respectively. On top of that one track was omitted in post-production leaving the band with a flawed product to push. Clocking under 28 minutes “Black To the Blind”, the third Vader album, is short even by their own standards. While the cards were stacked against the album from a technical standpoint Vader can always be relied upon, and “Black To the Blind” is no different in that respect. 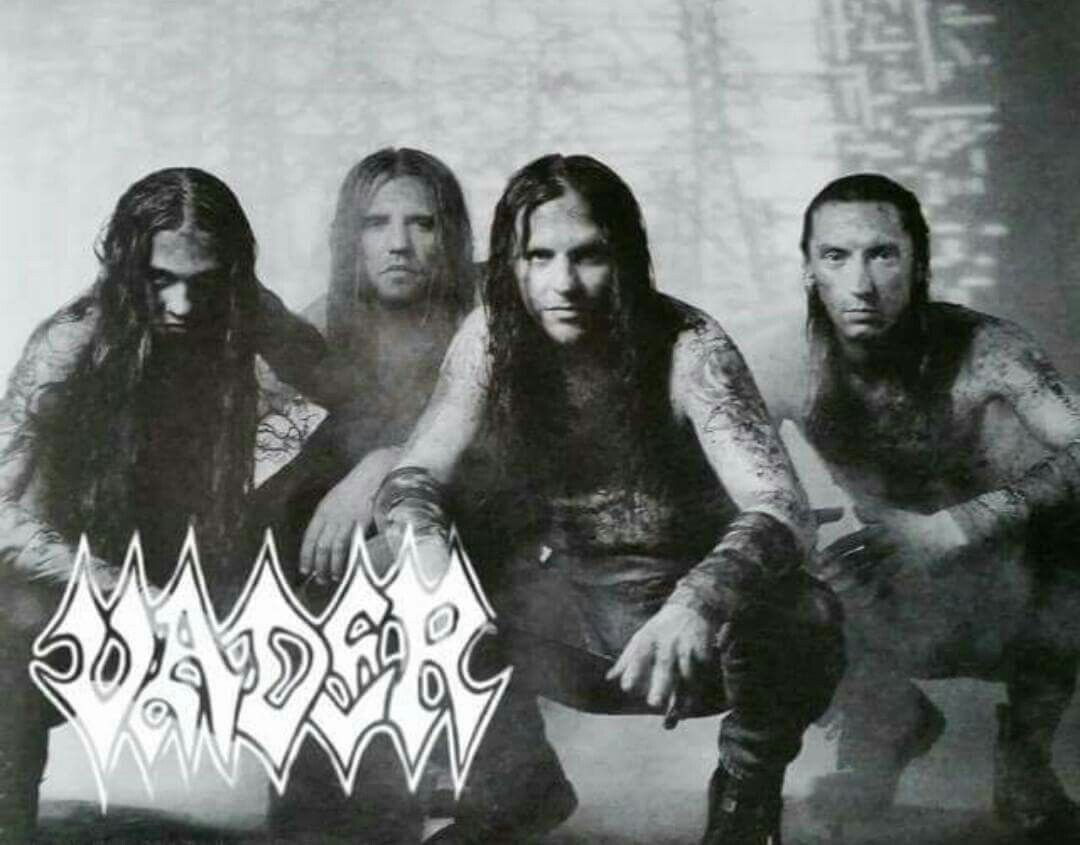 One of the first things to stand out is that “Black To the Blind” isn’t as blindingly fast as its illustrious predecessor. Opener ‘Heading For Internal Darkness’ works wonderfully thanks to the decreased velocity, although when it puts the pedal to the metal Vader is in fine form as they always are. The album is custodian to live staple ‘Carnal’ and while it is the first album to feature long-time guitarist Maurycy ’Mauser’ Stefanowicz there isn’t much of a difference from the albums that preceded or followed it. Notable is that the production robs the thick bass guitar of much of its power, whereas the drum kit sounds far more natural and organic, the sparkling leads/solos also shine wonderfully thanks to that very same bare bones and rather dry production. A dry production can either stifle a band in the worst manner (see: Metallica’s “…And Justice For All”) or make them sound that much massive (see: Gorefest’s “Erase”). Vader falls into the latter category with this release as it amplifies the writing strengths of its creative core duo while shedding all other unnecessary baggage for something altogether more poignant and direct.

“Black To the Blind” is more about controlled aggression than anything. This can be heard by the awe-inspiring performance of Krzysztof ‘Doc’ Raczkowski, who proves here why he was one of the most revered drummers of 90s death metal. This can clearly be heard in the earlier mentioned ‘Carnal’ which, despite being little over two minutes, manages to combine his different styles and techniques into a manageable format. Doc had his personal problems (mostly alcohol/substance abuse), but in the studio he was a pro. His limb control is amazing with excellent fills, thrash beats, cymbal crashes and exciting footwork. The interplay between Wiwczarek’s leads/solos and Doc’s drumming is the beating heart of this band’s repertoire, and “Black To the Blind” is no different. Compared to the preceding albums the tempo is a bit lower than you’d expect, and there are a few clean sung sections here and there. It is a minor stylistic deviation that is notable, but hardly one that is problematic as the songwriting remains intact despite the small cosmetic changes. Vader is still Vader here, a bit slower maybe, but still the same.

That Vader perfected its craft was already amply proven with “De Profundis”. This third album takes that line of thought to its logical conclusion, and most of the songs (less than half) don’t reach the three minutes mark. The ones that do typically aren’t the characteristic Vader songs, with exception of ‘The Red Passage’ that starts out with a sound effect and a bass guitar intro before heading into known territory. Even with the addition of several new elements to its sound it is hardly like Vader is selling out. Its sound is identical to that of the preceding records, and the decreased velocity allows several nuances in the riffing to shine through more clearly. It can be argued that Wiwczarek is better off not doing the cleaner passages, which would be true, but they would practically disappear after this album’s release. As expected for a band dealing with abstract occult and thelemic subjects, liner notes were provided detailing the meaning behind each of the songs on the record. In a sense “Black To the Blind” is a transitional album in between Vader two distinct early eras: the speedy, violent thrash-fused death metal that they were up to this point, and the more groovy, less technical and more accessible death metal act they would turn into with “Litany” and its celebrated/vilified successor “Revelations”. “Black To the Blind” marks the end of an era.

The album was cut at Selani Studio in the band’s hometown of Olsztyn with producer Andrzej Bomba. As per usual it was the duo of Piotr ‘Peter’ Wiwczarek and Krzysztof ‘Doc’ Raczkowski (drums) who laid down all instruments in the studio. Once again Piotr ‘Peter’ Wiwczarek shared production duties, so it is unclear who exactly to blame for the rather dry but strangely effective production. The often-maligned production works wonderfully well with Vader’s take-no-prisons death metal. All instruments can be heard, and the whole is crunchy albeit lacking in beefy bass tones, mid range and overall bottom end heaviness. This shortcoming would be taken care of on the follow-up to this record, which in turn led to complaints on the other end of the spectrum. “Black To the Blind” was the first to feature artwork by Polish digital artist Jacek Wiśniewski, who would become a household name in the scene thanks to his association with Vader. In all “Black To the Blind” is an excellent addition to the Vader catalogue, even though it is often regretfully forgotten for the more known (or popular) entries in the band’s canon.