Skip to content
With “Revelations” Polish death metal institution Vader reached a comfortable state of familiarity with its new style and procured a stable working relationship with Metal Blade Records. The album follows the template from “Litany” to a fault, but is more groovy and less overbearing in terms of percussion. It is the first album to feature bass guitarist Konrad ‘Simon’ Karchut, while also having more keyboard flourishes on one track with ‘Revelation Of Black Moses’. The album was promoted with a video for the track ‘Epitaph’, which coincidentally was the working title for the album when it was cut. “Revelations” is Vader’s most popular album, and unfortunately the last full length to feature long-time drummer and co-songwriter Krzysztof ‘Doc’ Raczkowski who would bow out due to a serious injury after laying down sessions for this album’s follow-up EP. 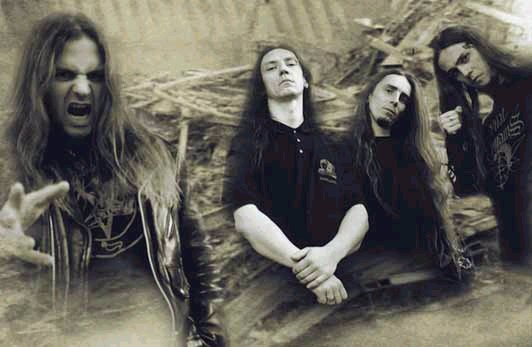 “Revelations” is a lot more straightforward, and thrashy compared to the releases directly preceding it. Nobody can deny the level of energy and enthusiasm that Vader put into each of its releases. There are minor instances of Wiwczarek’s continuing his spoken and narrative bits, but these are surrounded by his usual hoarse bark. There are several solos in each of the tracks. Generally speaking there are about two, sometimes three solo breaks per song with a recognizable hook for each. ‘When Darkness Calls’ is the only song to be more complex than the other cuts. In all it is more reminiscent of something of “The Ultimate Incantation” but written within the band’s current creative paradigm. For that reason it stands out compared to the other tracks which are more straightforward and don’t have nearly as much of a buildup. For the most part “Revelations” is an album all about Raczkowski’s incredible finesse behind the kit as he truly delivers one of his best performances here. Whether he’s belting out fast thrash beats, crushing death metal blasts or grinding slow patterns – he truly was one of a kind.

The album is generally on the fast side, although there’s a greater emphasis on midtempo parts. Each track is cut up in several of these sections, and within each cut these slow sections are usually bookended by a blistering blast segment. ‘Revelation Of Black Moses’ is different in the sense that it is a slow crawling song from beginning to end. This was a curious experiment for Vader who had always had slower songs, but never truly midpaced or even slow ones. More than anything the greater focus and reliance on guitar leads/solos to carry the songs becomes clear here. Around this time bands all over the death metal scene were pledging to play more demanding and technical material. Vader does both things simultaneously, playing structurally simpler songs overall but each of these tracks is loaded with impressive technical playing. The band has lost none of its dynamic sensibilities, and a number of songs truly excel at this. Above all Vader is consistent, more than anyone else probably. No matter what is popular at the time, this band will always play some variation of its established Slayer-meets-Morbid Angel brand of thrashing death metal. “Revelations” is no different.

All lyrics were written by Łukasz Szurmińsk, except ‘The Nomad’, ‘Lukewarm Race’ and ‘Revelation Of Black Moses’ by Pawel Frelik. There are guest vocals by Nergal (from then-emerging black/death metal hopefuls Behemoth) on the track ‘Whisper’.  Liner notes this time around are rather sparse, and rather succinct compared to earlier releases. The tradition of mentioning the band’s mantra ‘stay powerful, creative, joyous and free’ in the booklet is started here. Loosely conceptual, the “Revelations” album brought together lyrical observations on the 9/11 twin towers disaster. The band doesn’t go out of its way to push this particular concept to any degree. The lyrics do pay a greater focus to mob mentality, group-think and put a greater emphasis on religious references and iconography. Even without the lyrical baggage the record is a highly enjoyable barrage of populist thrashing death metal by one of the best in the genre.

The biggest strike against the record is that it is bland. There’s no real change in Vader’s formula in essence, but the writing comes off as tired and uninteresting. Even for Vader, whose very existence is based upon rabid intensity and punch, this record doesn’t do anything to forward the band’s profile. Each track is cut from the same format, and none of them sticks very long with the listener after they are over. This was something that earlier Vader releases had no problem achieving. The only real stand out tracks for this session appear to be ‘Whisper’ (most because of the sampled women moaning, and Nergal’s fiery guest vocals) and ‘Revelation Of Black Moses’ for being what amounts to Vader trying its hand at a very rudimentary form of doom metal. On the other hand, Vader in a creative rut is still better than a great deal of other bands in this genre at their supposed height. “Revelations” is no revelation for the genre, nor the band that produced it. It is a solid, but unremarkable album from a band that usually is better. Among the likes of populist death metal acts such as Bloodbath, Cannibal Corpse, Obituary or Six Feet Under – it is a breath of fresh air in a genre tired with its own sound.

It is one of the more vocal-oriented offerings of Vader’s brief tenure with Metal Blade Records. The duo of Piotr ‘Peter’ Wiwczarek and Krzysztof ‘Doc’ Raczkowski  returned to record at Red Studio in Gdańsk, Poland with producer Piotr Łukaszewski. As always Wiwczarek’s handled vocals and all string instruments, with Doc providing the drums. “Revelations” is about as bass-heavy as “Litany” and it is blessed with a more refined drum production. Even though this is the most bass-centric of Vader’s early catalog, the bass guitar lines are anything but interesting. Like so many of their contemporaries the duo insists on just doubling the guitar riffs to get that extra punch and heaviness. The album is paced a lot better than “Litany”, even though this would be the second album in a row where Vader simplified its sound for more immediate accessibility. “Revelations” despite its enhancements in production and presentation is the least impressive of the early Vader catalogue. It would take the band one more album to regain its composure.