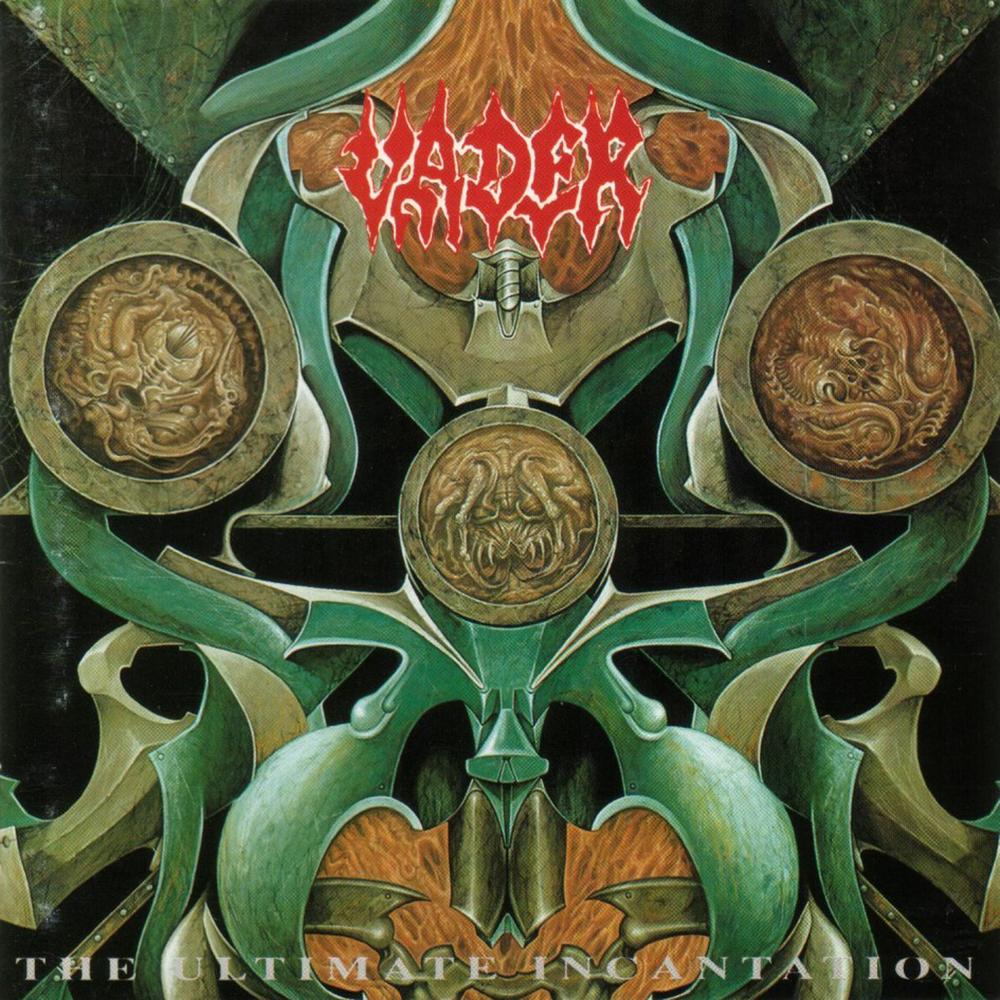 Vader is one of the earliest death metal bands of note from behind the Iron Curtain, and one of Poland’s most enduring institutions along with Behemoth. Theirs is a story marked by perseverance, strife and the unrelenting will to succeed no matter what the odds. The band formed in Olsztyn, Poland in 1983 and is centered around vocalist and guitarist/founder Piotr ‘Peter’ Wiwczarek, although he debuted with them initially in the bass guitarist slot. Vader’s second demo tape “Morbid Reich” (from 1990) would sell in excess of 10.000 copies making it the most popular death metal demo of all time. It is the first album in the band’s classic first era where both Wiwczarek and Krzysztof ‘Doc’ Raczkowski (drums) were the focal point and main songwriters for the band’s output. The duo would write and record all of Vader’s material up to the “Blood” EP from 2003. 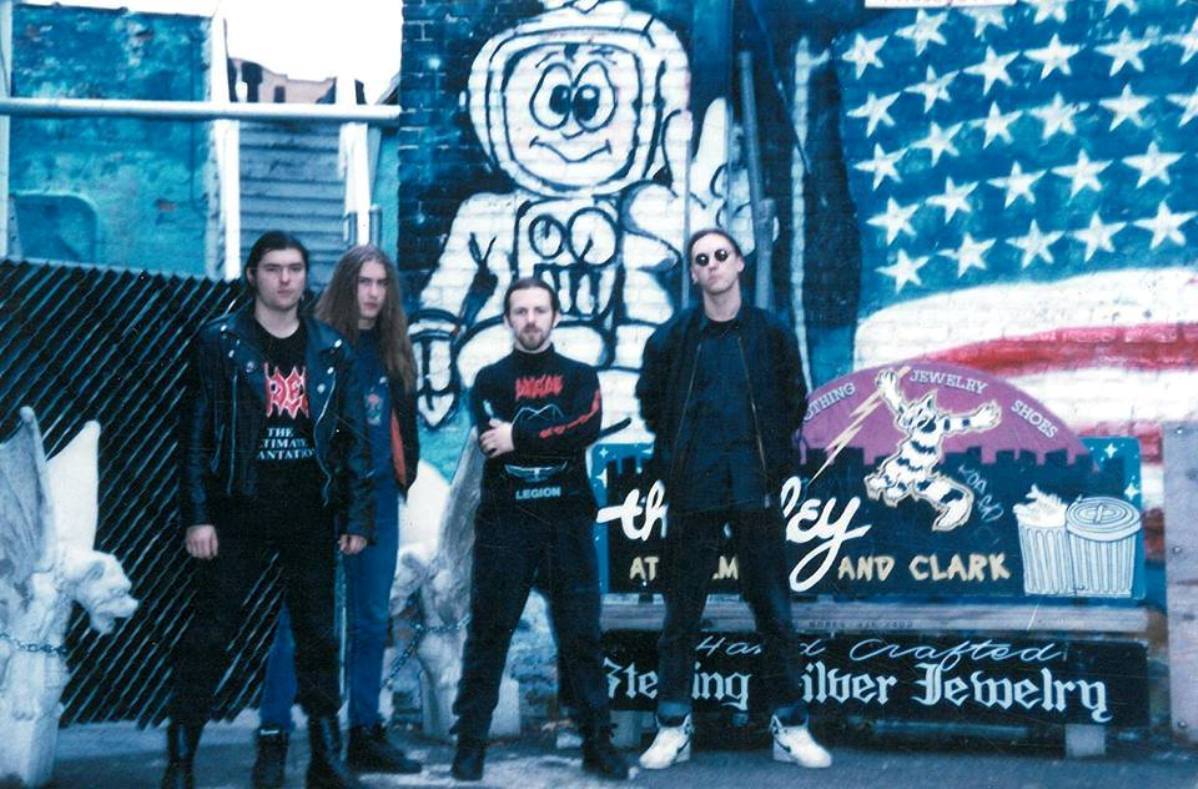 “The Ultimate Incantation” marks the end of Vader’s demo phase as it compiles all songs of the “Morbid Reich” session, and the signature cuts of the preceding “Necrolust” demo tape from 1989. Filling out the remaining spots are new tracks written specifically for this recording. Although initial tracking was done at the famed Sunlight Studios with producer Tomas Skogsberg, the session was prematurely aborted as both the band and its label weren’t satisfied with the product. The drum tone was a notable bone of contention – and a close lid is since held on the sessions. Vader, or at least Wiwczarek and Raczkowski, regrouped in England’s renowned Rhythm Studios with producer Paul Johnson to cut the album that would eventually be known as “The Ultimate Incantation”. Jacek ‘Jackie’ Kalisz and Jaroslaw ‘China’ Labieniec, although credited as bass guitarist and guitarist respectively in the production notes, did not partake in the actual recordings of the album. It was Wicwarek who recorded all string instruments. It is the only record Vader would release on Earache Records, and the only one to feature the artwork of Dan Seagrave, who was a staple in the North American death metal scene.

One of Vader’s greatest strength was to combine high-speed thrash metal architecture (mostly inspired by early Slayer, Sepultura and German variants of the genre) and merging it with the then-emergent death metal sound. “The Ultimate Incantation” sounds very much like “Altars Of Madness” by Morbid Angel, but Vader puts its own spin on the sound by surpassing that record’s sense of urgency and speed all while retaining an exciting dynamic range. All songs here are high-speed exercises with an impressive amount of riffs per song, varied and passionately intense drumming while staying memorable thanks to a recognizable hook. Each song is incredible on its own, but within context of the record this effect is amplified. Even this early on Vader knew its strengths and how to capitalize on them in the most effective manner possible. Even though the production is supposedly superior to the initial product cut at Sunlight Studios it is on the weak side even compared to releases of the day. The impotent production is blissfully forgotten as every single song on this record is as convincing as can be. All the lyrics were penned by people not directly involved with the band. Although the booklet credits the band for the lyrics it was probably Pawel Wasilewski or Pawel Frelik who effectively penned them. Vader would persevere with this practice as the band focused on writing the best music they possibly could while other people contributed the lyrics.

As this was the first Vader album the sound hadn’t yet fully formed, and it wouldn’t until three years later when “De Profundis” shook the scene. On “The Ultimate Incantation” the band very much remind of a speedier, meatier and all around more violent Pestilence circa “Consuming Impulse”, Massacra and its debut album “The Final Holocaust” or a decidedly less complex and dissonant Immolation, who released their stellar debut “Dawn Of Possession” just the year before, in 1991. ‘Dark Age’ is one of the few new songs of this album, and compared to the re-recorded demo songs it is more engrossing with a stronger dynamic sensibility and a fuller grasp on being entirely death metal in design. It is also custodian to one of the more memorable solos of the album, other than the ones in the truly savage ‘Final Massacre’ which arrives mid album. That it was chosen as video track for the album shouldn’t come as much as a surprise for that reason. One of the most recognizable Vader traits is already fully intact here. No matter how fast, or how intense, blood curdling and ferocious the music gets it never becomes incoherent. This is perhaps due in part as Vader’s early beginnings as a thrash metal unit, but it really speaks to the strengths of both Peter and Doc that they realized this early on, and never strayed from that path. Even the uniformly relentless “De Profundis” never forgets this important lesson through out its incessant battering and brutality – and that is testament to the strong writing alchemy of the band’s central creative duo.

While over-the-top and steeped in esoterica in its own right, “The Ultimate Incantation” isn’t quite as thematically cohesive as, for example, Deicide’s magnum opus “Legion” or Mortification’s “Scrolls Of the Megilloth”. What it did share with both contemporaries is the sheer level of heaviness, conviction and musical expertise. It wouldn’t be until the second album that Vader found its true voice, and got rid of all excessive weight. The current subject sometimes just is complex for the sake of having many riffs, and piles on a number of sound effects (chiming funeral bells, etc) towards the end of the album. Especially ‘Breath Of Centuries’ seems to become a victim of that tendency. On the whole it is a solid thrash-fused death metal record from the then unlikely place of Poland. Years later the Polish scene would experience an incredible surge in popularity, before the fans moved over to more exotic locations such as Italy, and Greece. Vader will always be remembered as one of the earlier, and more successful death metal acts from East Europe, and from the sign of things – they have no intention of slowing down soon.

Where other early outfits in the genre were losing steam, or making creative blunders during the 90s Vader, much like US stalwarts Cannibal Corpse, remained focused and kept on a relentless global touring and release schedule. They did not wane in the black metal explosion, nor did they fall victim to typical 90s groove metal chicanery that claimed its most notable victims among the more popular thrash metal bands of the day. There aren’t many debuts that are this solid and convincing. Vader had found what worked during its brief demo phase, and was now looking to improve its chops, trim its future material for maximum impact and deliver the best possible product they could. Wiwczarek and Raczkowski would continue to be the creative backbone of the band until the early 2000s. No matter who plays in the band, or on what label imprint they release their albums – Vader never truly disappoints. Although the real Vader only emerged on “De Profundis” this debut is important for more things than its historical value for the band and its genre. “The Ultimate Incantation” is one of the better European death metal debuts of its day – and it is a benchmark to which many would aspire, but only few would be able match. Vader set a precedent, and it was killer.