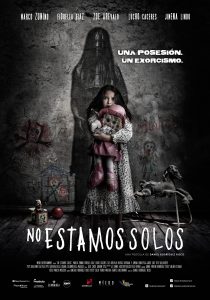 Plot: a young family finds that their new dwelling is haunted

Ghosts transcend cultures and timezones. Following the success of The Amityville Horror (1979) the international market was swept by American ghost movies. In the late nineties and at the dawn of the new millennium Hong Kong became the go-to place for quality ghost stories in the wake of movies like Ringu (1998), Ju-On: The Grudge (2002), Dark Water (2002) and The Eye (2002), all of which at some point or other were adapted for the American market. A decade from the Hong Kong movement the Spanish-speaking countries are experiencing a resurgence of horror cinema. Spain has a long history in terror – and horror cinema dating all the way back to the gothic horrors of the sixties, the many erotic vampire - and witchcraft movies from León Klimovsky and Jesús Franco. That is, of course, not counting the one-man industry that was Paul Naschy who rose to fame with his El Hombre Lobo werewolf movies and portrayed every classic Universal monster in the book. We Are Not Alone is the Peruvian equal of Verónica (2017). It is not nearly as scary, if it is scary at all, as it is atmospheric in the well-known Hong Kong tradition.

Apparently the horror cinema industry in Peru is just in a nascent stage at this point in time. The first domestic horror production was General Cemetery (2013) and it has since inspired other directors to follow the example. Daniel Rodríguez Risco is one of the country’s more celebrated directors having helmed various shorts and a number of feature length productions in a number of genres. Risco has won several awards in film festvivals across the globe and had a hand in writing, producing and directing some of the biggest Latin American blockbusters. As of 2016 We Are Not Alone is the only horror title in Risco’s filmography and he seems in no rush to return to the genre. We Are Not Alone is helmed with all the professionalism you’d expect of an experienced veteran of the big - and small screen. It wouldn’t at all be surprising if We Are Not Alone, toothless as it tends to be, ended up getting an American remake. Obviously there are far superior haunted house – and ghost movies. We Are Not Alone is unfortunately for the most part terribly bland.

As the manager of an important company Mateo (Marco Zunino) has been forced to move to the outskirts of Lima to meet the challenges of his job. Making the cross-country move along with him are his tween daughter Sofía (Zoe Arévalo) and second wife Mónica (Fiorella Díaz). The relationship between little Sofía and Mónica wasn’t the best to begin with and the relocation to Fundo Lazarte is the last thing two needed or were waiting for. The night that they have moved into the new place Sofía is immediately distrustful of her new surroundings and claims that monsters are hiding under her bed and that a priest should bless the house before they settle in properly. Mateo and Mónica shrug off Sofía’s strange request as childish superstition and a product of moving house against her will. It isn’t long before Mónica starts to experience the very forces that Sofía was talking about. Strange noises emit from the bowels of the residence, shadows move and inanimate objects start having a will of their own. After Mateo and Mónica discover a hidden chamber within their new home the hauntings become increasingly worse. The supernatural occurences inspire Mateo to dig into the history of Fundo Lazarte, a search that brings him to defrocked priest Padre Rafael (Lucho Cáceres). Rafael turns out to be familiar with the sordid history of the residence and fills Mateo in on the horrible crime that unfolded on the premises. According to Rafael a man named Ricardo (Paul Vega) one day murdered his wife Victoria (Jimena Lindo) and his son Gabriel (Matías Raygada). The case was never solved and the spirits of Victoria and Gabriel now haunt the dwelling. When the spirits claim a second victim in Mónica the faith of the good padre will stand the ultimate test. Will he able to withstand and cast out the evil spirits that dwell in Fundo Lazarte?

The screenplay from director Gonzalo Rodríguez Risco is written well enough but it doesn’t exactly put a spin, new or otherwise, on an old formula. In fact most plot developments are so trite and predictable that even at a very economic 75 minutes We Are Not Alone feels a bit long for its own good. It’s not so much that We Are Not Alone isn’t effective or fails to deliver on what it promises; it’s just that nothing of what it presents is particularly riveting or all that interesting. The writing is tight and perfunctory but it fails to do something, anything, with the ghost movie genre. What little scares there are, are so telegraphed and obvious that it’s far more rewarding to count the clichés and conventions that We Are Not Alone adheres to than whatever apparition or supposedly scary reveal that director Daniel Rodríguez Risco throws at the viewer. Verónica (2017) used a number of well-worn tropes and conventions too, but it at least was intelligent enough to use its tried-and-true ghost movie structure to tell an endearing, and at times compelling, coming-of-age story of an ordinary girl thrown in an extraordinary situation. Plus, it had Sandra Escacena which helped tremendously too. The only thing that We Are Not Alone has in spades is atmosphere, but it’s not nearly enough to make it stand out from the many competitors in the genre. As beautifully filmed as We Are Not Alone tends to be, it has little in the way of a pulse or distinct individual traits.

As any production from a Spanish language country We Are Not Alone lays on the Judeo-Christian rhetoric and symbolism fast and thick. There’s no cliché it doesn’t use as there are inanimate objects that move, scars on the wall that lead to a hidden room and as the haunting intensify Satanic symbols appear. The nominal hero of the piece is not the secular businessman Mateo, but defrocked priest Padre Rafael who has been experiencing a crisis of faith ever since losing his mystic / paranormal investigator father during an exorcism in Fundo Lazarte many years earlier. The featured ghost portrayed by Jimena Lindo is an apparition in the Sadako from Ringu (1998) mold. Over the course of the hauntings Mónica stops eating and sleeping ultimately giving way to a truncated homage to William Friedkin’s The Exorcist (1973) in the last fifteen minutes, including the levitating bed. We Are Not Alone liberally borrows from The Amityville Horror (1979), The Exorcist (1973), Poltergeist (1982), and Ringu (1998), to name the most prominent. It’s not that We Are Not Alone is bad because it certainly isn’t. What ultimately becomes its undoing is its slavish adherence to convention and cliché. In earlier decades South/Latin American horror was known for its exuberance and excess. We Are Not Alone has nothing of the sort. It retains the strong Judeo-Christian message that the continent is famous for, and is notoriously homogeneous otherwise.

The cast includes nobody in particular and seems to consist largely of Risco stock company – and respectable domestic television actors/actresses. Marco Zunino is the most recognizable name having played bit parts in beloved, high-profile American TV series Alias (2003) and Castle (2016). Next to Jimena Lindo as the ghost by far the strongest presence is young Zoe Arévalo. Fiorella Díaz holds her own well enough as the constantly imperiled Mónica. Much of a nonentity for the majority of the feature Díaz surprises with the possession and exorcism scenes in the third act but it’s not enough to warrant anything more than a passing recommendation. Nobody acts outright bad and Zunino, Lindo and Arévalo excepted We Are Not Alone has no outstanding performances to speak of. It’s rather emblemic for the production as a whole. Everything is solid and technically sound, but nothing in particular stands out. Peruvian horror has yet to find its footing and voice and while retaining the same cultural sensibilities of decades past We Are Not Alone probably isn’t the best the country has to offer in the genre.

Over the course of 75 minutes We Are Not Alone packs several decades’ worth of ghost – and haunted house movie conventions. The result might not exactly be spine-tingling or chilling, but it’s a professionally helmed and atmospheric little genre exercise when it fires on all cylinders. Far and few as these moments tend to be, when they do appear they more than justify the long wait. It will be interesting to see how Peruvian horror develops from here on and whether We Are Not Alone will retroactively become historically important for the same reasons. There’s no contesting that Gonzalo Rodríguez Risco is a master technician who knows what makes the genre tick. It would be interesting to see him tackle a contemporary giallo murder mystery or an erotic vampire - or witchcraft movie, although both niches seems to have died out. We Are Not Alone might not be as crazy and surreal as any of the classic Latin American genre offerings, but that doesn’t stop it from being very atmospheric and effective. Hopefully Peru will soon be carving out it’s own niche on the international horror cinema map.